The tiny islands that comprise Malta, set in the middle of the Mediterranean sea, are home to prehistoric art and architecture out of all proportion to their size. Although the origins of these ancient buildings remain largely unexplained. The islands’ early remoteness in human settlement appears to have fostered a powerful local religion. This provided the context for the construction of megalithic temples and their associated art — including Malta’s famous ‘fat ladies’.

Malta’s temples are older than the Pyramids, they predate stonehenge.

In 1915, a farmer in the town of Tarxien, curious about the enormous stones in his fields, called in the experts. Archaeologists excavated the area and discovered three large temples. The temples where built by people whose only tools were axes and flints. The Tarxien Temples, constructed between 3600 and 3200 BCE.  Along with Malta’s other megalithic temples, they are among the earliest free-standing stone constructions known. The temples and structure in Malta predate both Stonehenge (c. 3100 BCE) and Egypt’s pyramids (c. 2630 BCE). 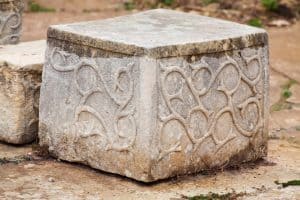 Each Temple that has been found is slightly different in plan. Each temple is remarkable for its artistic and technological achievements. Their facades and internal walls are constructed from upright stone slabs, topped with horizontal stone lintels. Surviving masonry suggests they had corbelled roofs, probably capped with horizontal beams — a sophisticated building technique for its time.

The temples external walls were usually constructed from blocks set alternately face out and edge out. This approach  bound the wall securely with the rest of the construction. The gap between outer and inner walls was then infilled with stones and earth. A building technique that has  created solid structures that have stood the test of time.

Each Temple is embellished with dressed stone with carved and painted decoration featuring a variety of motifs, including spirals, animals and plants. The artefacts found within the Temples, their altars, ‘oracle’ holes and decoration, suggest the Temples were once the focus of ancient ritual within a highly organised society.

Odyssey’s small group tour of the Western Mediterranean Islands visits both the Archaeological Temples and the Archaeological Temples at Xaghra, both now UNESCO World Heritage sites. Not surprisingly, the name Ggantija (gee-gan-ti-ja) comes from the Maltese word for giant. Some of the megaliths at the site are over five metres in length and weigh over 50 tons! At Tarxien, the southern temple is the most highly decorated, and is famous for its colossal statue of a skirted figure standing inside the main entrance.

Each Temple has a narrow entrance path. From the path are differing numbers of hemispheric chambers branching off in a shape reminiscent of a clover leaf. These chambers are incomplete domes, once roofed in animal hides. It has been suggested their plan might have represented the head, arms and legs of a deity. Since one of the commonest kinds of statue found associated with them are Malta’s ‘fat ladies’, believed to be a symbol of fertility.

Who were the ‘fat ladies’?

Although generically referred to as ‘ladies’, the gender of many of the sculptures discovered at Malta’s ancient sites is actually uncertain. They are usually interpreted as fertility figures due to their plumpness. Although given the statues location at the entrance to the southern temple, the colossal figure at Tarxien may be a temple guardian figure. Smaller portrayals of similarly shaped figures were recovered from Tarxien and other sites on Malta. Some are portrayed standing, some seated on a throne, and some seated on the ground with their feet tucked in. One particularly lovely figure is portrayed lying on a couch on her right side, with one hand under her head and a cloth draped over her hips. Known as the ‘Sleeping Lady’, she is one of the many treasures in the National Museum of Archaeology — itself a fine example of Malta’s later Baroque period architecture  in Valletta, Malta’s capital.

Does the ‘Sleeping Lady’ sleep?

But is the Sleeping Lady really asleep? She was discovered in the Hal Saflieni Hypogeum, an underground burial complex hewn from solid rock using only tools made of chert, flint, obsidian and deer antler. One of its most striking characteristics of the Hypogeum is its chambers. The chamber mimics Malta’s above ground Temples in form and shape. The ancient architects appear to have recreated the Temples of the living above ground for the dead below. Several have ceilings with rings of carved stone overhanging the one below, in imitation of the corbelled masonry found in the Temples. Some of the Hypogeum’s ceilings and walls also have the same spiral decoration as the Temples, only here they are painted in ochre.

When first excavated in the early 1900s, it was estimated over 7,000 individuals were interred in the Hypogeum, a practice spanning some seven centuries that continued until c. 2,500 BCE. Along with the Sleeping Lady, artefacts recovered from the site include pottery vessels, stone and clay beads and amulets, and little carved animals and birds that may once have been worn as pendants.

The people who created this remarkable underground necropolis and ancient Temples were replaced by new immigrants around 2,500 BCE, perhaps from southern mainland Italy or Sicily. These Bronze Age people succeeded the Temple builders, bringing with them an entirely new culture which included disposing of their dead by cremation. How this wave of immigration occurred is hotly debated by scholars. But Malta’s early indigenous cultures were eventually brought to an end by the Phoenician occupation in the 7th century BCE. The Phoenicians were only the first wave of successive invaders to bring their own unique culture to Malta. In turn, the Romans, Arabs, Sicilians, Spanish, French and British have all contributed to this tiny group of islands at the very heart of the Mediterranean.

Odyssey offers two different small group tours for seniors encompassing Malta each year. Both tours are limited to 18 travellers. Odyssey’s tours typically have an educational theme. This approach  suits our mature travellers who wish to learn about the rich history and culture whilst visiting these destinations.

Our Western Mediterranean tour begins with five days in Malta. The small group tour then continues on to Sicily, Sardinia and Corsica. Along with Malta’s megalithic temples, ‘fat ladies’ and the Hypogeum, highlights of our stay include St John’s Co-Cathedral, spiritual home of the Knights of St John Hospitaller, and the ‘silent city’ of Mdina.

In Sicily we see the wonderful mosaics at the Villa Romana del Casale. The tour also visits the magnificent Baroque town of Noto and Arab/Norman Palermo. Sardinia’s highlights include the ancient fortified towers of Su Nuraxi, and Nora, Sardinia’s best preserved Roman city. On Corsica we visit the stunning natural reserve of the Golfe de Porto.  This tour also visits the Palais Fesch des Beaux Art, home to an important collection of Napoleonic Art.

Naturally, the beautiful locations visited over our 26 days tour are complemented with wonderful local food and wine!

As its title suggests, our Following Caravaggio tour follows in the footsteps of the brilliant but troubled Italian artist. After fleeing to Malta, Caravaggio was welcomed by the Knights of St John Hospitaller. In Malta, Caravaggio painted several works for the great medieval military order before being expelled for fighting. His masterpiece, The Beheading of John the Baptist, was painted during his time on Malta and hangs in St John’s Co-Cathedral in Valletta. This tour also takes in Leonardo da Vinci’s Last Supper in Milan; as well as other works by Caravaggio hung in other great European galleries. These include the Uffizi Gallery and Pitti Palace in Florence; and the Galleria Borghese, Palazzo Barberini and Capitoline Museum.