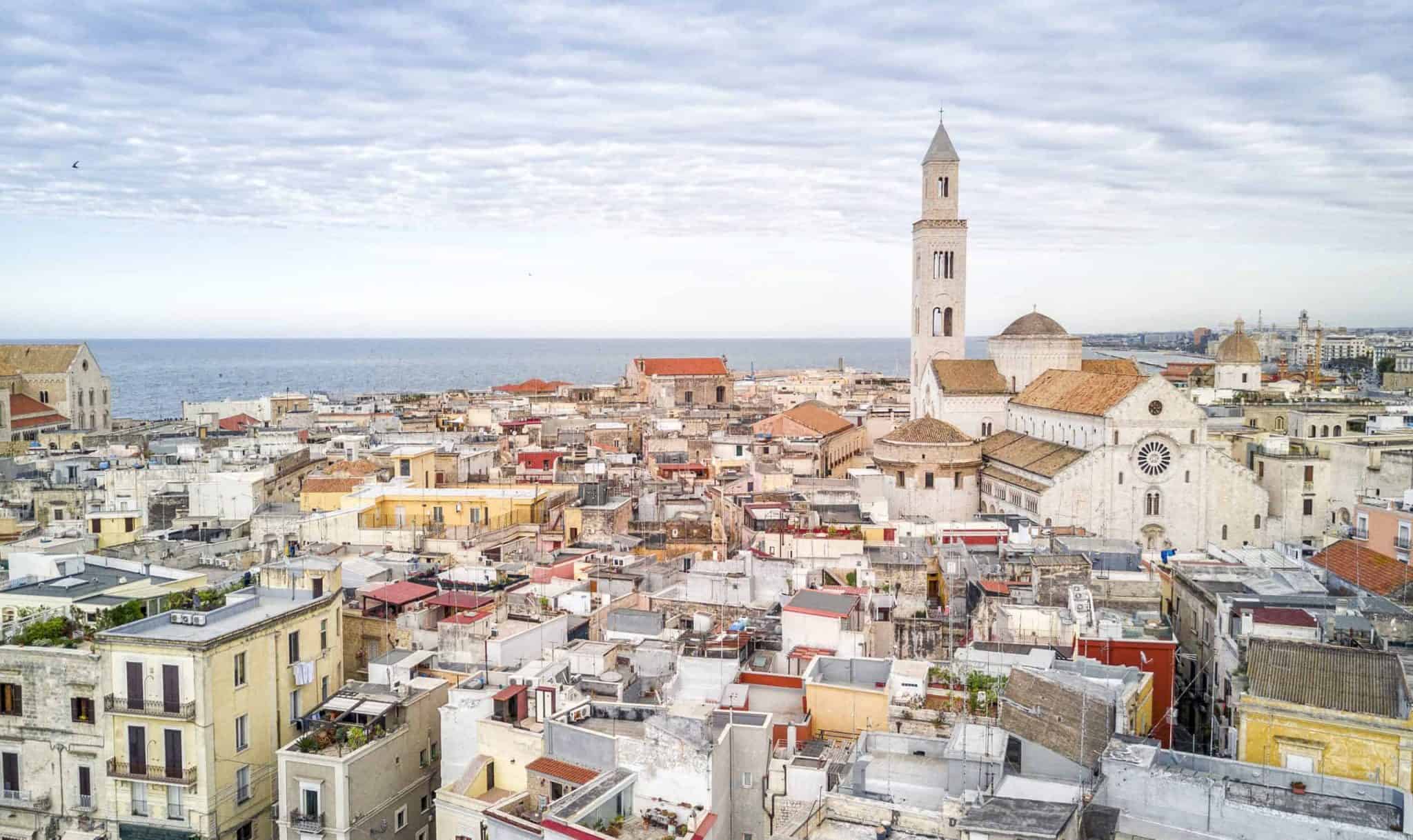 While travel guides and blogs have begun to tout Apulia as Italy’s ‘newest hotspot’ (Vogue Australia), the province’s capital, Bari, has been unfairly neglected. But we think this might be for the best, leaving this lively city – home to a historic old town and an emerging restaurant scene – to the discerning traveller.

Bari has been a major centre and vibrant trading hub for millennia. In Roman times it was the most important city on the Adriatic, a major centre of trade between the Western and Eastern parts of the Empire. Under Byzantine rule, it tragically became a major port in the slave trade, as Eastern Europeans were brought to work in Turkey and the Middle East.

Bari came under Norman rule in 1025, and rose to fame when the remains of St. Nicholas were moved to Bari after their initial resting place- in modern-day Turkey – came under Muslim rule. The remains are now housed in the Romanesque Basilica di San Nicola, dating to the end of the 12th century. The basilica remains a major point of pilgrimage for Christians of Roman Catholic and Eastern Orthodox faith, especially during the annual Festa di San Nicola (May 7-9), which commemorates the anniversary of the relics successful move.

The surrounding Bari Vecchio (Old Town), once considered run-down, has been revitalised over the past ten years, making it an ideal place to stroll and lap up the atmosphere of medieval Italy. Other must-see destinations include the Cathedral, another Romanesque masterpiece, and Castello Svevo, built in its current form by the Swabian ruler of Bari, Frederick II, in the 12th century.

Travellers with an interest in the ancient history of Bari should visit the Museo Archeologico di Santa Scolastica, a collection of fascinating Bronze Age, Greek, and Roman relics, opened in 2018. Another highlight for Italian history buffs is the Museo del Succorpo della Cattedrale – underneath Bari’s main cathedral – which reveals the ruins of a 2nd-century Roman road, a Christian basilica dating from the 5th century, and a Byzantine 9th century church.

Outside of the Old Town, Bari’s streets become wider and straighter. The city’s modern shopping area was built during the French occupation of Italy in the late 18th century and early 19th century, commissioned on an octagonal plan by Napoleon’s brother-in-law, Joachim Murat, who ruled as the King of Naples. Murat’s enlightenment centre is linked to Bari Vecchio by a long, seafront promenade.

Another highlight of Bari is the Teatro Petruzzelli, the largest theatre in Bari and the fourth largest in Italy, and one of the city’s most beloved buildings. Built at the end of the 19th century, it was almost destroyed in 1991 due to fire. The theatre was restored and reopened in 2009 in all its historic grandeur.

Bari was long regarded as a working-class port city, with little to offer the travellers who fly into Bari airport to begin their tour of Apulia, but the past ten years has seen the city become one of the most forward-looking in southern Italy, an ideal spot for lovers of slow travel. Bari has become a centre for modern art, centred around the Spazio Murat, a re-purposed harbour-front building that now plays host to a rotating series of cultural and art displays, and the Teatro Margherita, an iconic early 20th century theatre and cinema which, after thirty years of abandonment, has also been reopened as a contemporary arts hub.

Bari’s revitalisation has also transformed the culinary scene, with a young generation of local chefs turning towards the region’s traditional cucina povera for inspiration. Literally translated as ‘cuisine of the poor’, cucina povera is defined by a creative use of whatever was at hand (or could be picked in the garden), without luxury goods such as meat and eggs. Apulia’s signature pasta, orecchiette, is made solely from flour and water, without the addition of eggs, and then molded by hand into the ‘little ears’ that give it its name and served with tomato, eggplant, or broccoli sauces. Another Bari specialty is riso, patate e cozze, rice, potatoes and mussels layered and then baked. Street foods include panzerotti, deep-fried pastry stuffed with tomato and cheese, generally sold in piazzas around the city. Puglia is Italy’s largest producer of wine, so make sure to order something from the wine cellar to compliment your meal.

Bari is the perfect spot from which to launch your tour of the heel of Italy. In the Puglia region, make sure to head to the beautiful Valle d’Itria to see the unique trulli dwellings with conical roofs (listed as a UNESCO site), and the limestone caves of the Castellana Grotte. Further south, you’ll reach the Salento area, home to the baroque city of Lecce, known as the ‘Florence of the South’ for its combination of art and architecture, including a virtually intact Roman amphitheater. To the north of Bari, the Gargano peninsula is home to a striking coast, ancient forests, and historic towns. Surrounded by both the Adriatic and Ionian Sea, Puglia has Italy’s longest coastline, a worthy rival to the Amalfi Coast with sheer limestone cliffs, turquoise waters, and sandy beaches.

Bari is also ideally located for a day tour to the city of Matera (in the neighbouring region of Basilicata), home to ancient cave dwellings that have housed locals for thousands of years and one of the hidden gems of any Italy tour.

External articles to assist you on your visit to Apulia and Southern Italy: