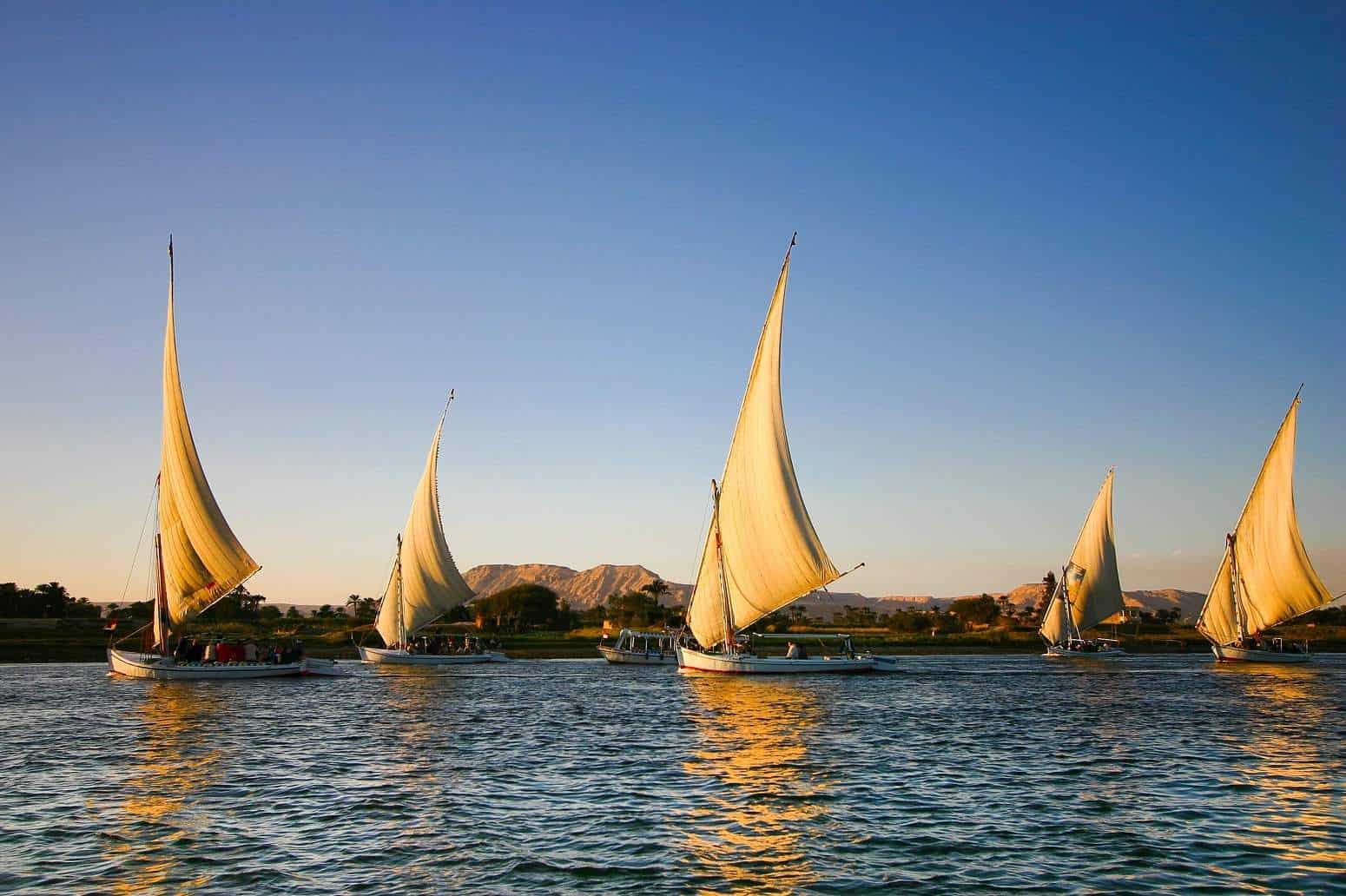 The Nile River is the longest river in the world at 6695 kilometres long. Flowing from Uganda, through eleven countries, through to Egypt, it empties into the Mediterranean Sea. The Nile is composed of two tributaries: the White Nile and the Blue Nile. The White Nile is the longer of the two and begins in Tanzania, flowing north until it reaches Sudan where it converges with the Blue Nile, which begins in Ethiopia.

The Nile River in Egypt

For millennia, the river has been a source of irrigation for the countries it passes through, transforming dry, arid land into regions of lush greenery. Around 5,000 years ago, the Ancient Egyptians relied on the Nile and it provided them with fresh water, food and a means of transportation. It meant they had fertile land on which they could farm and grow crops and today it has a similar role, continuing to be an invaluable life source for the people of Egypt. More than 95% of the country’s population depend on its water and live within a few miles of the river banks. This is because of the Nile Delta.

The Nile Delta is situated in northern Egypt and is one of the world’s largest river deltas, stretching from Alexandria in the west to Port said in the east and covering 240km of Mediterranean coastline. The delta is formed by the division of the branches of the River Nile, which spread out in a V-shaped fan, making their way towards the Mediterranean. This is what makes the area one of the world’s most fertile farming areas. The soil of the Nile Delta between Cairo and the sea is rich in nutrients due to the large silt deposits left behind as the river flows into the sea. From space, you can see the stark contrast between the Nile’s verdant green river banks and the arid desert that encircles the area. The Delta used to flood annually and this is what brought such lushness to an otherwise barren region but the flooding ended with the construction of the Aswan Dam.

The powerful impact of the Nile is one of the reasons Herodotus wrote that the gift the Nile gave the world is called Egypt. While there are ten other countries from which you could see the Nile but the river is the heart of Egypt and getting a sense of the country and the way it develops is dependent on understanding the effect of the Nile. The Nile gave Egypt wealth, power and sustenance. For this reason, one of the most amazing things you can do when travelling Egypt is a Nile River cruise, which allows you to trace Egypt’s lifeline as it flows through the country. If you are going to visit Egypt, cruising the Nile gives you a sense of the Egyptian landscape and the experience of travelling down the ‘green ribbon’ of Egypt as so many people have done for thousands of years. Cruise travel allows you to take in the breeze, the palm trees, the watermelon crops, the variety of birdlife and the deep-green scent of the river.

A Nile River cruise has become an almost essential part of an Egyptian holiday because so many of the most famous ancient sights are located on the river. This makes a cruise a practical option but also far more beautiful option than navigating busy streets and chaotic roads. On a cruise, you get to see temples and monuments illuminated at night with the reflective water glimmering around them. During the day, the rural scenery looks much like it would have done centuries ago.

If you’re interested in discovering Egypt, the Nile is a must-see. They say every river has a story to tell but when it comes the world’s largest river and Egypt’s life source, there is more than one story to be told.

As a travel company we seek to keep guests off the beaten path. Trips that are remembered for authentic experiences. Our small group journeys in Turkey are fully escorted by an experienced local guide and an Odyssey guide to give this type of  experience whether at one of the many UNESCO World heritage sites explored or local bazaars. It is always about the adventure and memories that we will create.