The History of Vilnius 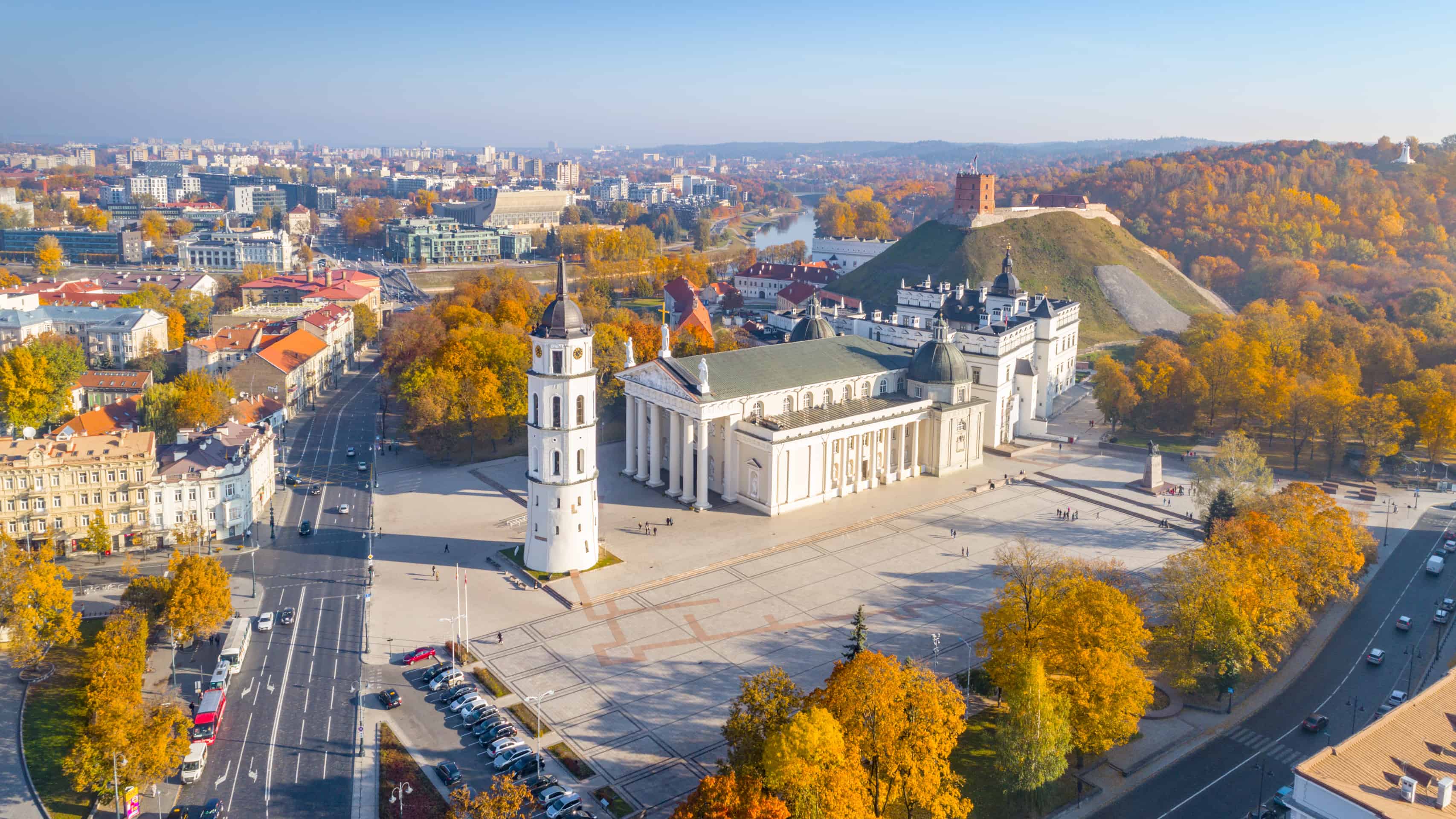 The History of Vilnius

A tour of Vilnius, the capital of Lithuania, reveals a rich but also at times devastating history of different peoples. Emerging to prominence in the 14th century, Vilnius would become one of the more vibrant and tolerant cities in Eastern Europe, home to a mix of different cultures and religions, flourishing for centuries as an administrative capital and centre of trade. However, from the late 18th, the people of Vilnius city would be forced to embark on an almost 200-year struggle to maintain their culture and the city’s status. This article explores the city’s history and culture to assist as you visit Vilnius.

Odyssey Traveller visits Vilnius as part of our Baltics small group tour. This tour is designed for senior and mature travellers who seek to travel with 6 to 12 like-minded people, and enjoy learning about history and culture with the help of our knowledgeable tour leaders and expert local guides.

Growth into a Prominent City

Human life has long existed at the site of Vilnius: archaeological site evidence dates back to ancient Palaeolithic times and a built settlement existed from the 10th century. However, its growth into a prominent, vibrant, and multicultural city began from the 14th century when Grand Duke Jogaila established the Polish-Lithuanian Union (1385) – Europe’s largest state at the time and one of its most powerful.

During the 16th century the town grew rapidly into a beautiful architectural city. The Old Town layout developed and was surrounded with defensive walls and gates from 1503, of which today the famous Gates of Dawn still stands. Then in 1544 King and Grand Duke Sigimundus II Augustus established his court in Vilnius, making it the centre of the Polish-Lithuanian Union. The richness of the city further grew with thousands of new houses built, as well as amazing palaces, and cathedrals in the gothic style along its narrow streets.

When the Union of Lublin (1569) established the Polish-Lithuanian Commonwealth, Vilnius lost its status as an administrative capital, replaced by Warsaw. Nevertheless, its importance remained: Kings continued to use the palace; the Vilnius University (established 1579) became the primary centre of science and education eastern Europe; and the city flourished as a vibrant centre of Jewish culture.

Liberal reforms under King Stanislaw August Poniatowski (c. 1764-95) uneased Poland-Lithuania’s neighbours – Russia, Austria, and Prussia – consequently intervening to partition the lands. Vilnius was annexed by Russia in the final partition of 1795 becoming the administrative capital of the imperial province of North-western Krai (present day Belarus and Lithuania) until 1915.

During the rule the city was rebuilt to look more Russian. Catholic church buildings were converted to Russian Orthodox or secular use, a monument to a czar or governor on any given street become common, and many stately administrative buildings were erected.

In 1860 the industrial revolution began in Lithuania. Over the following decades the Railroads were constructed, gas lighting and then electricity became available, as well as horse-drawn trams and public buses. Rapid urbanisation followed the technological changes and a grand new civic centre (or New Town) was constructed to the West of the Old Town.

During the 20th century Vilnius experienced a dark history of war and occupation. Following almost four years of German occupation during WWI, from 1915 until the end of 1918, Vilnius became the capital of newly independent Lithuania. This was short lived, however, as Poland took over by force in 1920.

Then in 1939 at the very beginning of WWII, the Soviet Union captured the city and compelled Lithuania under threat of invasion to sign a mutual assistance treaty. The treaty allowed Lithuania to regain Vilnius in return for stationing Soviet military bases. Yet, only a year later the soviets broke the treaty and annexed the city launching a period of violent persecution and deportation of the Lithuanian and Polish intelligentsia (1940-41).

In 1941 the Germans followed with their own invasion. Persecution continued, this time of the Jewish community who found themselves suddenly locked in Vilna ghetto. A large number were eventually killed, sent to labour camps, or fled, reducing the population from 54,600 in 1931 to 16, 400 by 1959.

The Soviets reoccupied Lithuanian in 1944, and began a major campaign of destruction of buildings, churches, chapels, and cemeteries. These were replaced over the decades of Soviet rule by large Stalinist buildings, squares, and statues dedicated to communists and soldiers. Fortunately, most of the most valuable and beautiful buildings in the Old Town survived both the war and communist occupation, and was declared as a UNESCO World Heritage Site in 1994.


Vilnius was catapulted to worldwide status in the late 1980s and early 1990s, playing an important role in the collapse of the Soviet Union. Underground opposition led to the formation of the Sajudis movement in 1988 and the coordination of major demonstrations in the city for independence. March 11th 1990 is perhaps the most important date in Lithuanian history as the Supreme Council of the Lithuanian Soviet Republic declared the country’s independence.

A Russian blockade of fuel and heating followed, as well as military aggression on January 11th-13th 1990 killing 14 people and injuring 700 hundred at the Vilnius TV Tower. The people of Vilnius resisted armless against Soviet tanks and finally on September 6th 1991 the Soviet Union finally gave in. Lithuania was the first soviet state to be recognised as independent, sparking a chain reaction of following states and the collapse of the Soviet Union.

Since independence Lithuania has made a number of major reforms, proving to be one of the most successful countries in adapting to the free market system, and joining the EU in 2004. Vilnius, as the nation’s capital, has led the way.

These articles are either published by Odyssey Traveller or are carefully selected external sources to maximise the senior travellers’ knowledge and enjoyment of Lithuania when visiting: 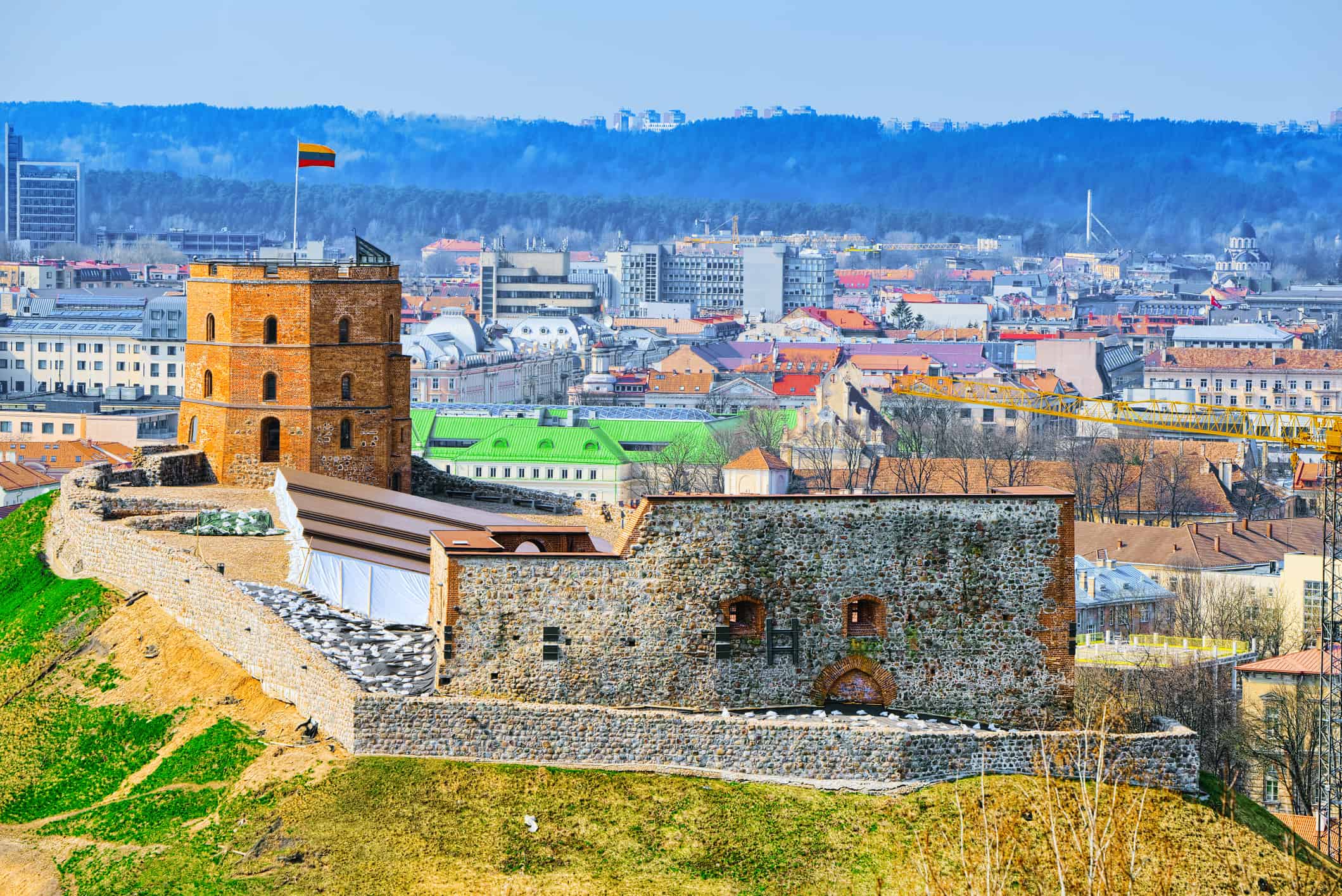 Gediminas Tower is the remaining part of the Upper Castle in Vilnius. Gediminas, the Grand Duke of Lithuania and a key ruler of the Grand Duchy, built the first wooden fortification on the site early in the 14th century, and Grand Duke Vytautas completed the first brick castle in 1409. The tower was rebuilt in 1933, and the Vilnius Castle Museum (part of Lithuanian National Museum) opened in it in 1968, displaying reconstructions of the castles between the 14th and 17th centuries. There’s an observation deck on the top of the power providing the best panoramic view of the city, and since 2003 a funicular railway takes people from the foot of the hill to the top, saving visitors from a fairly steep climb.

The Vilnius Cathedral, officially known as the Cathedral Basilica of St Stanislaus and St Ladislaus of Vilnius, is the main Roman Catholic Cathedral of Lithuania. The Cathedral Square and the Cathedral were key locations in the city’s life, as they are situated at the crossing of the city’s main streets. The construction of the original temple begun in 1251, ordered by newly converted Grand Duke Mindaugas, and remains have been discovered under the current structure. Since then, the cathedral was rebuilt and redecorated several times. Late in the 18th century after the collapse of the southern tower, the cathedral was reconstructed in a Neoclassical style as we know it today. The Soviet regime ordered the cathedral to be converted into a warehouse before mass services could continue in 1988. 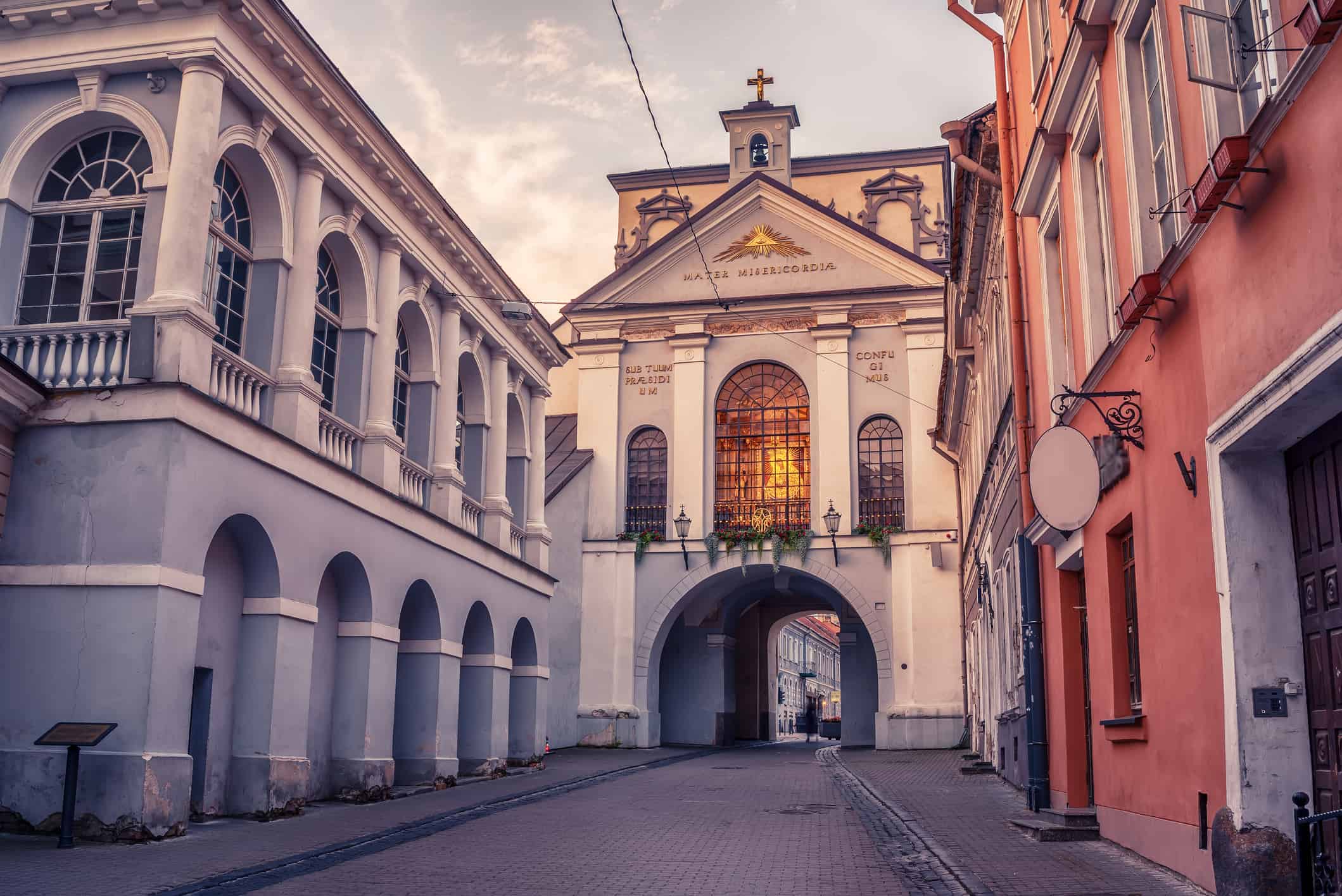 The Gate of Dawn or Sharp Gate was built in the 16th century on the southern border of the Vilnius Old Town. Completed in 1522 as part of the city’s defensive walls, it is the only gate that hasn’t been destroyed by the Russian Empire in the 18th century. It is famous for the Vilnius Madonna painting in the Chapel of Mary the Mother of Mercy. The painting was completed in the 17th century in renaissance style, attracting pilgrims of all faiths from across Europe as it is said to have miracle-working powers. 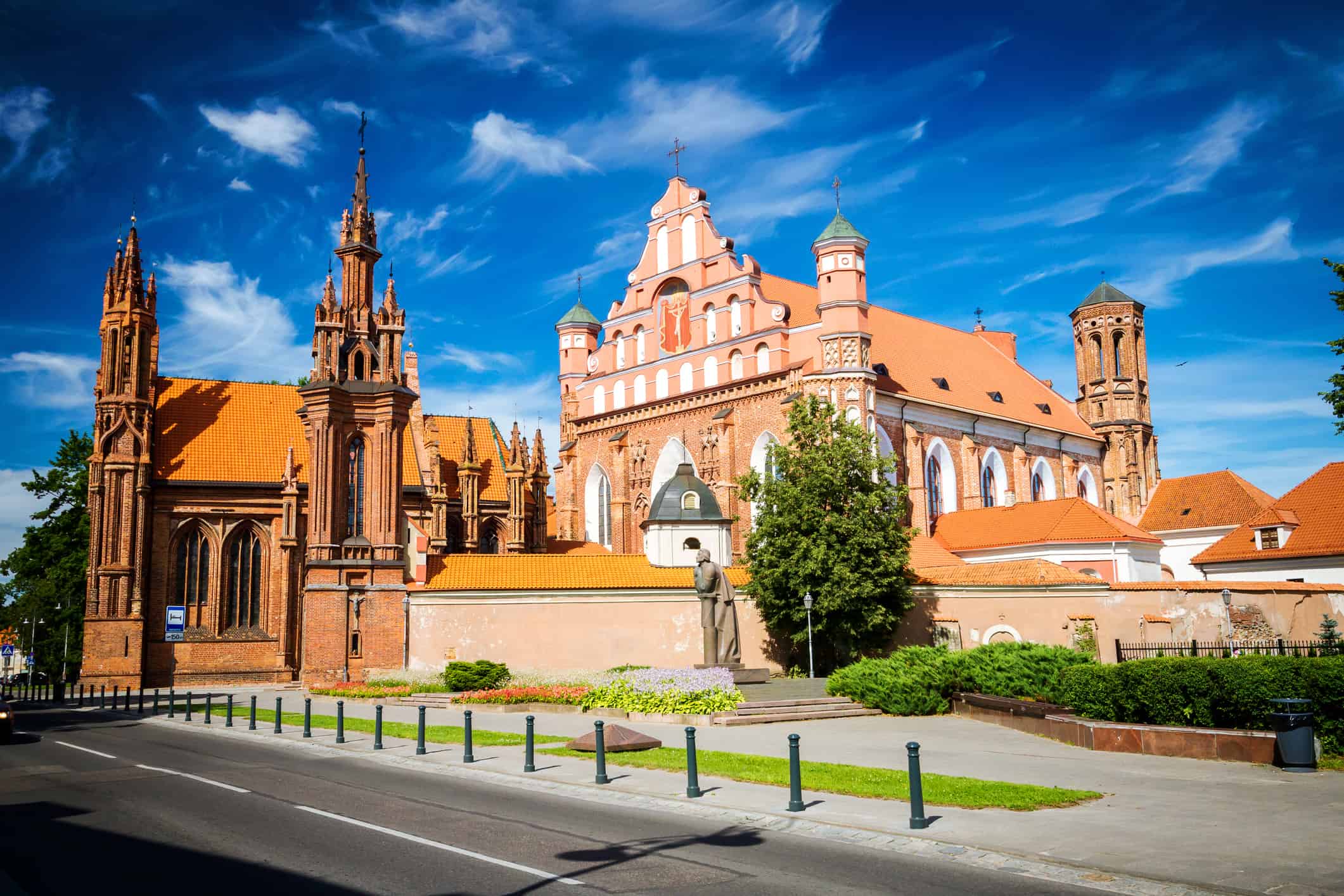 This icon of Vilnius survived the storms of history for more than 500 years almost untouched. A first wooden church on site was dedicated to Anna, the wife of Vytautas the Great, but burned down in a fire in 1419. Later in the 15th century it was rebuilt using 33 different kinds of bricks, and the façade is largely unchanged since. It is said to be one of the most beautiful pieces of Gothic architecture and should be on every visitors to-see list while enjoying a walking tour of the Old Town. 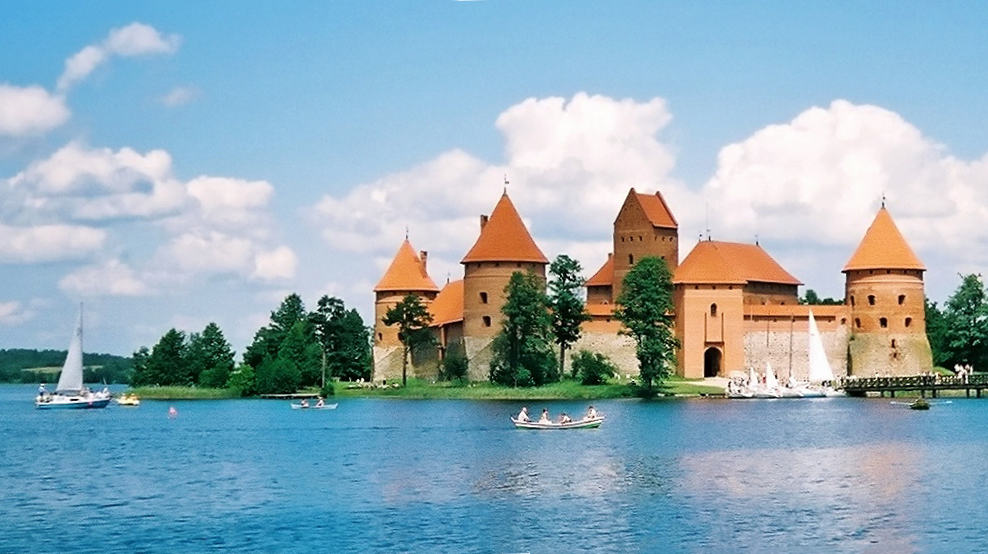 The Trakai Castle is located on an island in Lake Galve about 25 minutes from Vilnius. The construction of the castle started in the 13th century and Vytautas the Great completed the major works in 1409. In the next phase of construction two wings and a 6-storey donjon was built in a Gothic style with Romanesque elements. The third phase mainly focused on strengthening the castle: the walls were thickened, and three more defensive towers were added to the corners. However, after the death of Grand Duke Vytautas the Great, the castle slowly fell into disrepair. The Soviets took on a major reconstruction work from 1946 and finished it in 1961, and it’s been a major tourist attraction since.