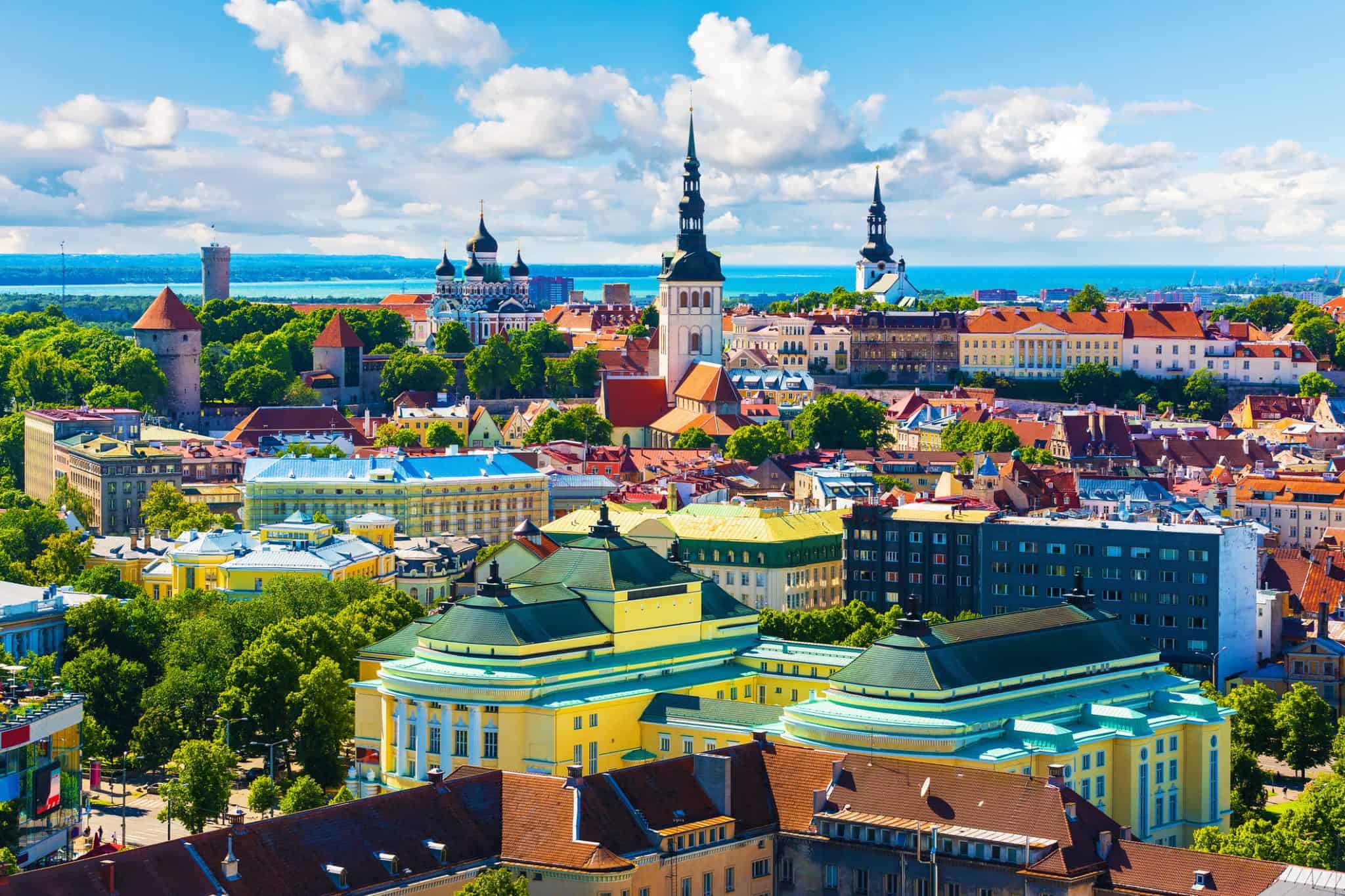 A Historical Tour of Tallinn

The city of Tallinn, the capital of Estonia, is a beautiful city located in the northern area of the country, on the shore of the Gulf of Finland of the Baltic Sea. A tour of Tallinn reveals much of the city’s interesting history covering the last thousand years from an important trading city in Medieval times, through to its struggles for autonomy under the domination of Denmark, Sweden, the Russian Empire, Nazi Germany, and the Soviet Union. This article explores this history to assist your tour in Tallinn.

Odyssey Traveller visits Tallinn as a key destination of our 21-day long Baltics small group tour. The tour is designed for senior and mature travellers who enjoy the company of like-minded people (number of participants is usually 6 to 12), and are keen to learn about history and culture from our knowledgeable tour leader and enjoy the expertise of a local tour guide at several destinations.

The first historical account of Tallinn dates back to Medieval times in the amazing Livonian Chronical of Henry, which describes Danish King Valdermar II and his fleet landing in June 1219 to battle local tribes. Legend says that the flag of Denmark (the Danneborg) fell from the sky during the battle changing fortune towards the Danes. Victorious they established a fortress on Toompea Hill and gave Tallinn its name (Taaani linn, Estonian for ‘Danish Town’).

The city joined the Hanseatic League in 1285, a mercantile and military alliance of Northern European cities, and performed an important role over the next couple hundred years as a channel for trade between the Hanseates and merchants of Russia.

During the Hanseatic period, the city prospered into one of northern Europe’s largest and best-fortified. In the 13th century a number of significant clerical establishments were built including the St Nicholas’ Church, St Olaf’s Church, and the amazing St Mary’s Cathedral (also known as Dome Church).  The town wall consisting of 66 defence towers was constructed in the 14th century and a major boom of construction including the Town Hall, Great Guild Building and Olavi Building followed in the next century.

In the mid-14th century, due to internal policy and lack of cashflow, the King of Denmark had sold Northern Estonia to the German Teutonic Knights, under which it remained in the Hanseatic League. But as prosperity faded in the 16th century, the Hanseatic League weakened, and the Russians, Swedes, Danes, and Poles moved in to fight for superiority in the Baltic region clashing in the Livonian War (1558-1583).

With the breakup of the Teutonic Order, the local German aristocracy in 1561 placed Estonia under Swedish protection against Poland and Russia, successfully withstanding two Russian sieges (1570-1571 and 1577). For 150 years the territory was ruled as a Swedish dominion, which under certain limits retained its established political systems and privileges for the elite.

The Swedish made a number of reforms with lasting influence, particularly in education establishing the University of Tartu among other educational institutions, and in religion staunchly promoting Lutheranism and providing translations of the Bible into Estonian.

From 1700-1721 Sweden and Russia battled for superiority in the Baltic Sea region. With Tallinn ravaged by plague, Sweden capitulated the city to Peter the Great without fight in 1710. Tallinn maintained most of its earlier privileges administered through the Town Council, with the German rulers remaining culturally and economically autonomous.

But by the 19th century, the Russian emperor incrementally limited the power of the Town Council and the pressures of Russification mounted as Tallinn developed into a key city of Imperial Russian trade and industry.  Paper and match factories, and a machinery manufacturing plan were all established in the later half of the 19th century. And in 1870 the Baltic rail road opened connecting Tallinn to St. Petersburg and the rest of Czarist Russia, significantly boosting trade relations.

Turbulent Start to the 20th Century

Tallinn fell under turbulent times during the first half of the 20th century as it struggled for its autonomy. On February 24, 1918, Estonian independence was first proclaimed in Tallinn, taking advantage of the weakening Bolsheviks. However, the very next day German troops moved in and occupied Estonia.

Following Germany’s loss in WWI some months later, political power was handed to the Estonian Provisional Government. But yet again with this the Soviets returned, sparking the Estonian War of Independence for control over the country.

On February 2, 1920, a peace treaty with Russia was signed, creating an independent Estonia with the capital Tallinn. Freedom Square at the southern end of the Old Town and the Cross of Liberty and Monument to the War of Independence within the square commemorates their victory.

However, once more independence was short-lived, interrupted by the outbreak of WWII, falling under control of the Soviets in 1940, then the Nazis from 1941, and back to the Soviets in 1944.  Tallinn suffered badly in WWII, with nearly all of the city’s 1,000 Jews killed in the holocaust, and thousands of buildings destroyed during Soviet bombing. Yet, most of the valuable Old Town was preserved.

Under Soviet control Large-scale industry was developed following the war, with booms in machinery construction and electro-technical companies for the Soviet military industry, as well as consumer goods and food industries.

The population of the city expanded rapidly with foreign workers brought in from other parts of the Soviet Union, growing to 480,000 by 1990 from 175,000 in 1937. Large soviet-style settlements were built in the suburbs to house the workers and the Old Town became run-down and mostly abandoned.

August 20, 1991, marks an important date in Estonian history as the nation reestablished its independence following the collapse of the Soviet Union. Tallinn quickly become a charming modern European capital during the 1990s, with the Old Town restored and a modern business district established.

In 1997 the Old Town was crowed a UNESCO World Heritage Site. In 2004 Estonia along with Baltic area countries, Latvia and Lithuania, joined the EU. And today Estonia’s tourism industry surges, attracting the everyday tourist to visit Tallinn to experience the interesting and fascinating history and culture as they wander the street through the beautiful Old Town and wooden-house suburbs and stroll through the galleries and museums that capture its past.

These articles are either published by Odyssey Traveller or are carefully selected external sources to maximise the senior travellers’ knowledge and enjoyment of Estonia while visiting: 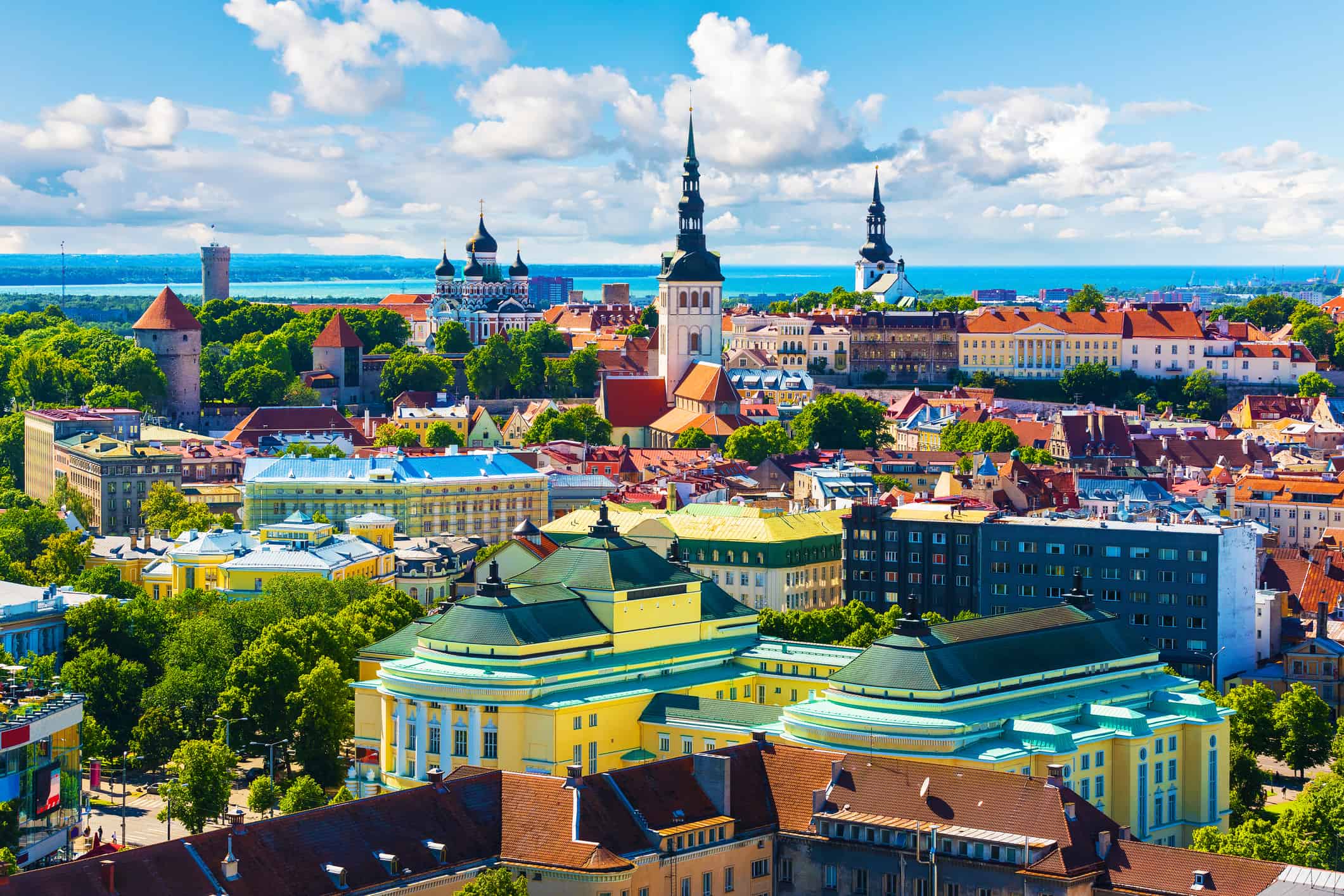 Charming cobblestone streets, medieval buildings, some of the best cafes and restaurants in town, traditional Estonian dishes, such as Kiluvõileib (sprat sandwich) or Vastlakukkel (a special sweet) – visitors are guaranteed to have an amazing time while they enjoy a walking tour of one of most iconic areas of the Estonian capital, Tallinn’s Old Town. Make sure you don’t miss out on walking St Catherine’s passage (adjacent to St. Catherine’s Church) with its medieval atmosphere and handicraft workshops. The more adventurous can explore the 17th century tunnels running under the Old Town, providing shelter for citizens during the bombings. 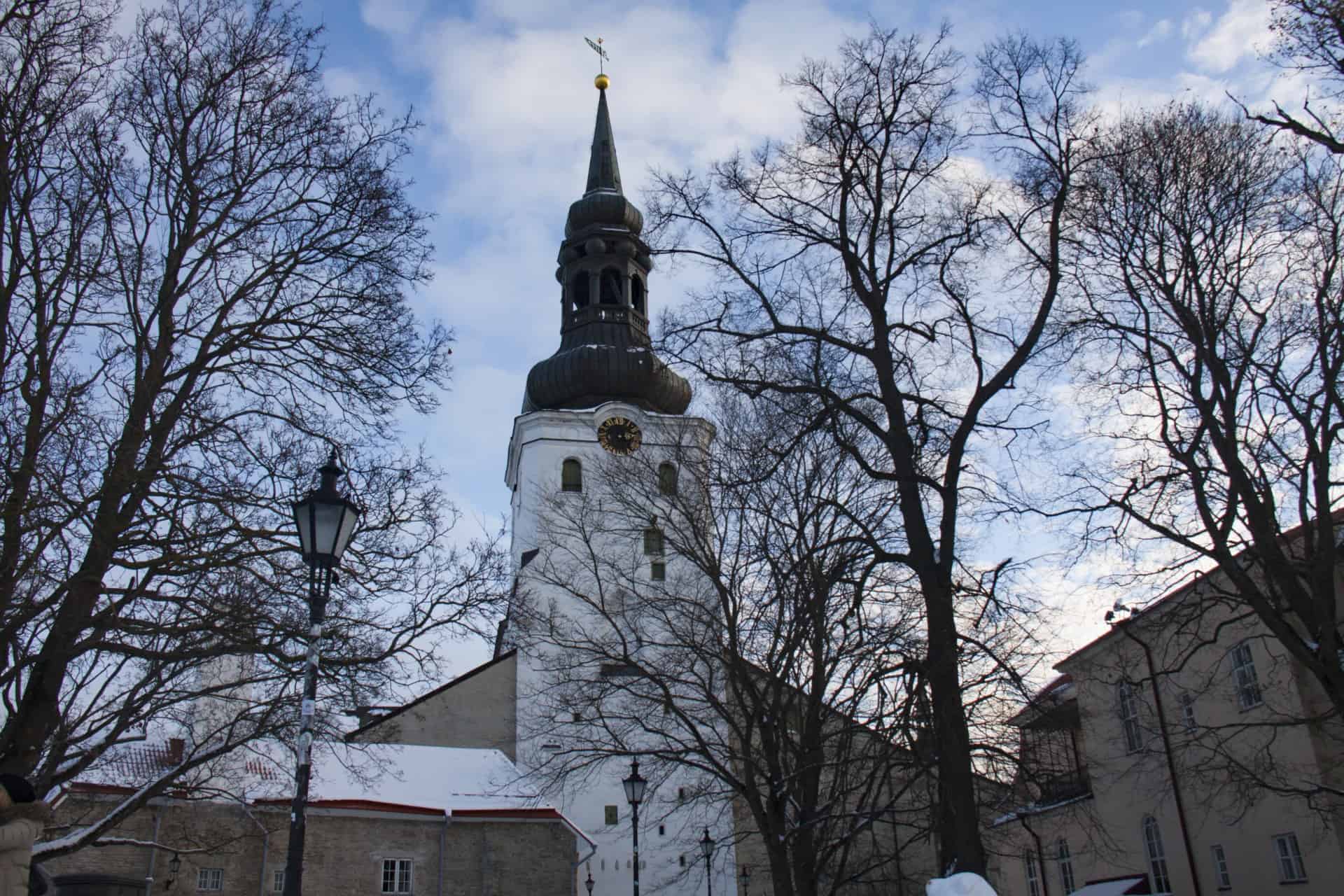 Also known as the Dome Cathedral, St Mary’s Cathedral is Estonia’s oldest church, built in the 13th century by Danes who invaded Tallinn. The church was first mentioned in a letter sent to Rome in 1233. It has a distinct Gothic, medieval style, and was converted to Lutheran from Catholic in 1561. The interior of the church was considerably damaged during the fire that swiped through the Toompea Hill area in the 17th century, but most of the Gothic exterior, dating to the 14th century survived. Visitors can also climb the Baroque bell tower to enjoy the panoramic view of the city. And if you’re already up on the hill, don’t miss out on the different views of Tallinn and the Baltic Sea from the Kohtuotsa viewing platform and the Patkuli viewing platform. 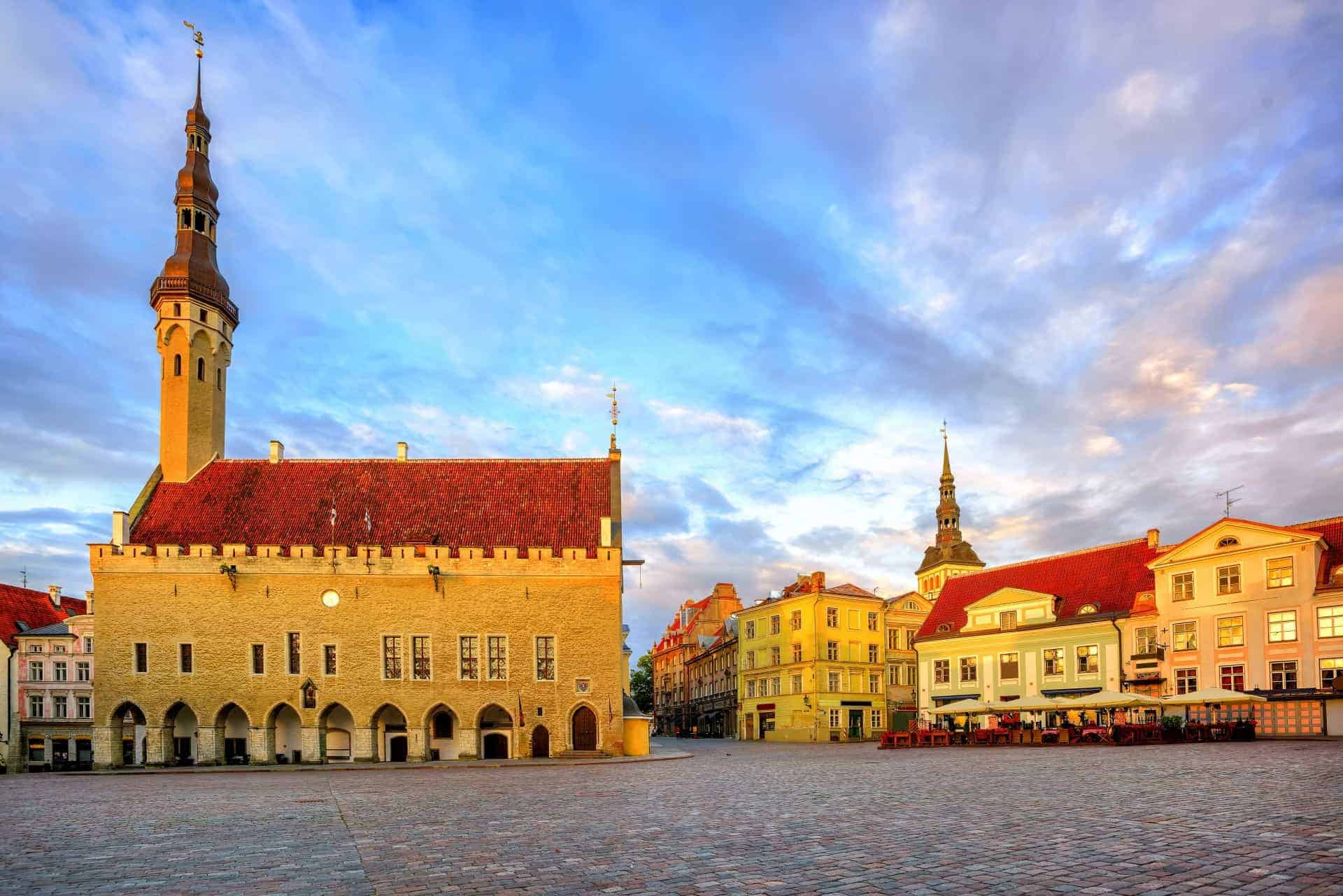 Town Hall Square is dating back to the 11th century. Although officially it is no longer the city’s marketplace, it’s busy with cafes and restaurants during the summer, and a lovely Christmas market during wintertime. Town Hall is located on the south side of the ancient square, and it’s a spectacle itself with the Old Thomas weather vane, the city’s defender since 1530, and its dragon-headed gargoyles. 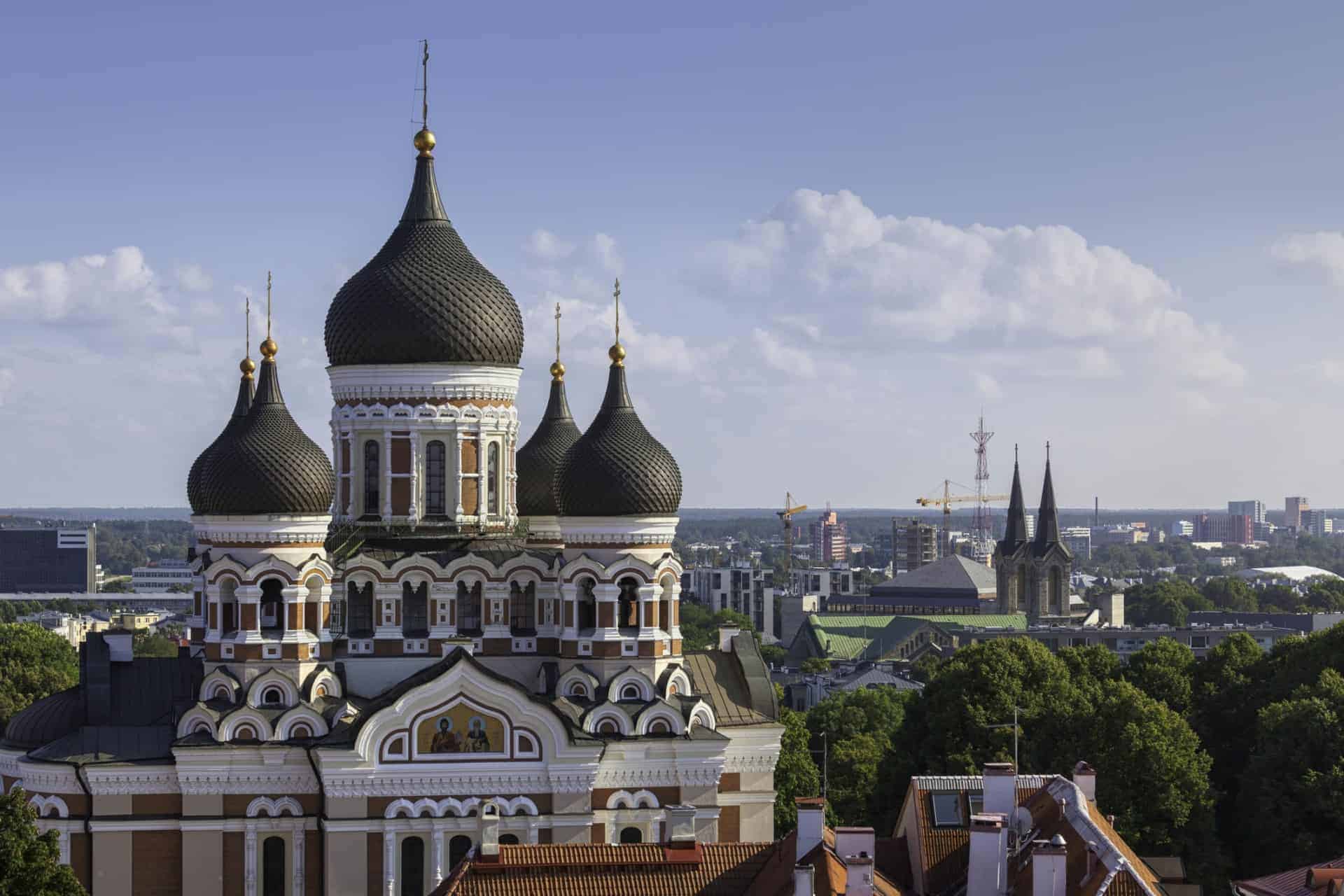 St Nevsky Russian Cathedral (also known as Alexander Nevsky Cathedral) is the biggest Russian Orthodox Cathedral in the whole country. It was named after Alexander Yaroslavich Nevsky, Prince of Novgorod, who won the Battle of the Ice at Lake Peipsi in 1242. The cathedral was finished in 1900 on Toompea Hill as a symbol of the empire’s religious and political dominance when Estonia was part of the the Russian Empire. It was built on purpose atop the hill to overshadow Toompea Castle. It also has an impressive interior decorated with mosaics and icons, and is home to 11 bells, including Tallinn’s biggest bell weighing 15 tonnes. 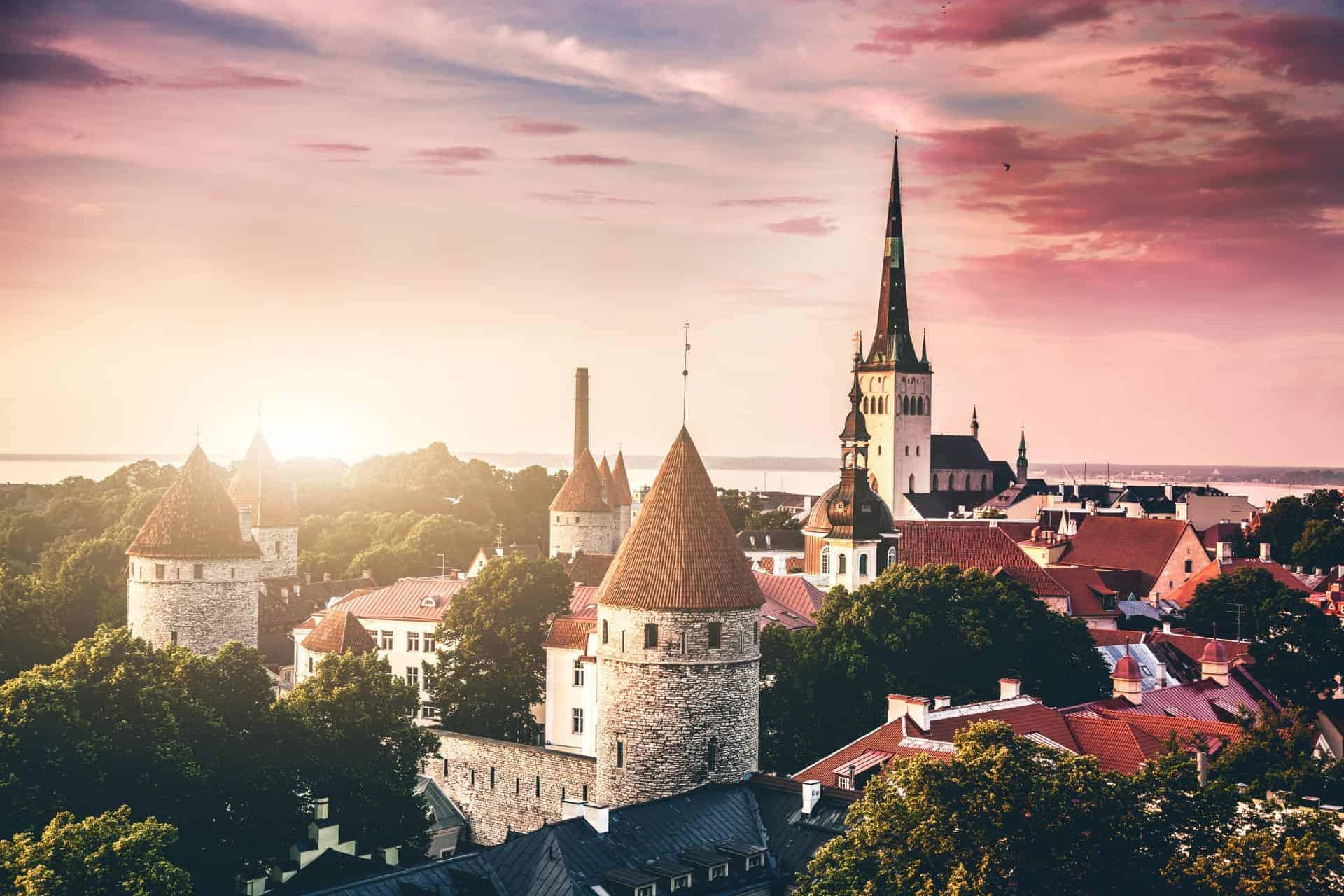 St Olaf’s Church is Tallinn’s biggest remaining medieval structure. It is believed it was built in the 11th century and its fist mention was back in 1267. The church was named after the Norwegian king Olav II Haraldsson, and it was the centre of the Scandinavian community living in Tallinn. The tower of the church, once standing at 159 meters has been hit by lightning several times, and burned down three times: 1625, 1820 and 1931. Today’s 124-meter spire is open for visitors from April to October and provides a great view over the Old Town, Toompea hill, and Tallinn’s port.

Kadriorg Park is an outstanding park in Tallinn, a few steps away from Tallin Bay. The construction of the park began in 1718 under the orders of Russian tsar Peter I.

The park is home to several museums, such as Kadriorg Art Museum (Kadriorg Palace), KUMU (the Estonian Art Museum) and the Mikkeli Museum. It is also popular due to its Swan Pond and beautiful flower beds. 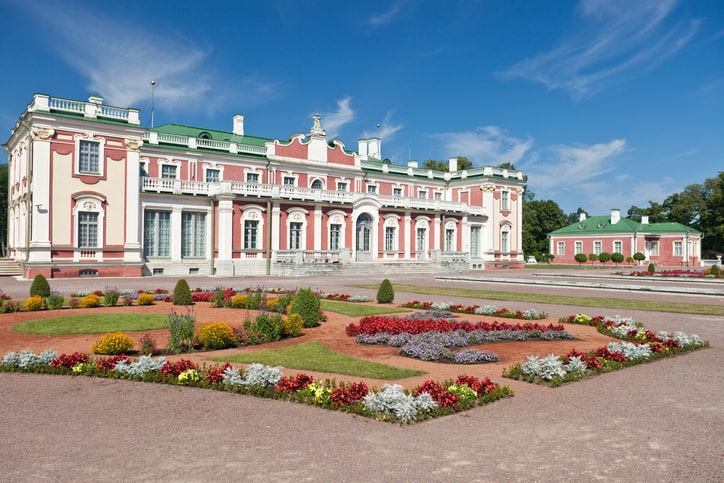