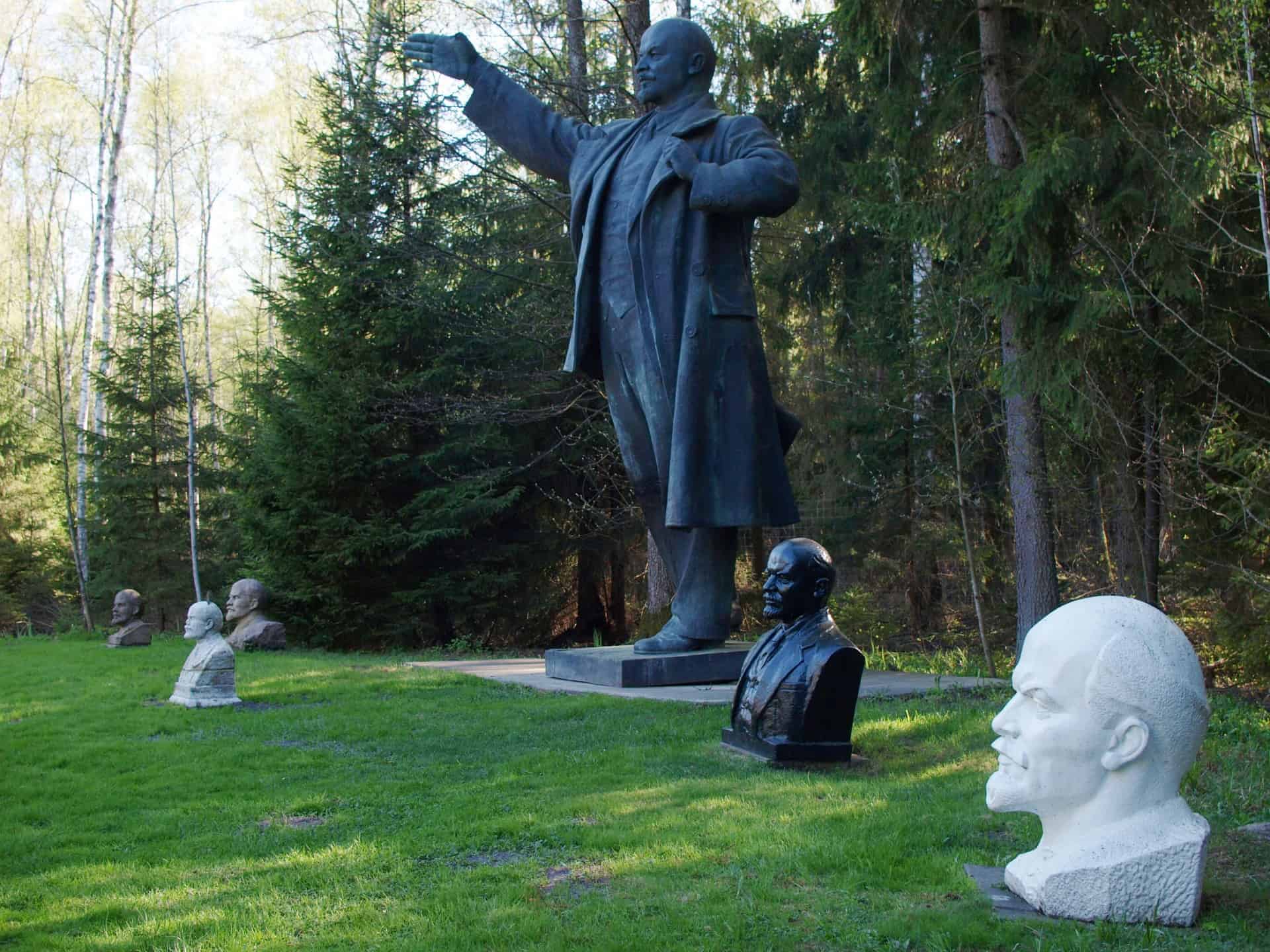 A communist statue graveyard, Grutas Park is a dark homage to one of the worst periods of Lithuanian history. Eight kilometres east of Druskininkai, a spa town on the Nemunas River in southern Lithuania, Grutas Park is essentially a sculpture garden of over 100 Soviet-era statues and artefacts, providing an unprecedented insight into the Red Terror that was unleashed against Lithuania and the stifling atmosphere of Soviet rule. As well as statues, visitors can see an impressive collection of documents, newspapers, propaganda posters, video footage and audio files from the time.

In 1990, when Lithuania regained its independence, various Soviet statues of leaders and prominent communist figures were pulled down and dumped. Little thought was put into what to do with the statues so in 1998 Lithuania’s Ministry of Culture invited entrepreneurs to put forward solutions of what to do about the statue situation. Viliumas Malinauskas, a canned mushroom magnate, wanted to build a privately-financed museum with the sculptures. Originally, he envisioned creating a train from Vilnius to Grutas that would transport visitors to the park in cattle cars, similar to the cars used in Soviet deportations of Lithuanians to Siberia. While this part of the plan didn’t pan out, Malinauskas won the tender, most likely because he could fund the project without the government’s help. Malinauskas was granted 40 states and in 1999, they were transported to the south of Lithuania.

The park opened on  April 1st, 2001, located in the wetlands of the Dzūkija National Park. Its establishment was controversial and Malinauskas faced fierce opposition but the businessman argued that a nation should not forget its history. Some accuse Malinauskas of glorifying the Soviet regime by erecting statues that were originally designed to be grand monuments of Soviet power. The park features prominent statues of Vladimir Lenin, USSR’s founder, and notorious dictator, Joseph Stalin, who caused the worst man-made famine in history. Critics argue that the park has become a shrine to the Soviet leaders who inflicted so much pain on Lithuanians while others suggest the open-air museum redefines the statue as historical sculptures that help to tell the story of Lithuanian’s journey to independence and nation building efforts.

Grutas Park is a popular tourist destination, welcoming around 60,000 visitors a year. Located about 130km from Vilnius, the capital of Lithuania, the best way to get to the park without private transport is via the bus from Druskininkai. There is an admission fee to enter the park, which contains the sculptures, a mini-zoo, a playground, fragments of concentration camps and a replica of a train carriage that was used to transport people to death camps. There are 86 statues by 46 different sculptors and they are organised into spheres such as the Soviet Sphere and the Red Sphere.

If you are interested in Soviet-era history and curious about the impact of Soviet times on the Lithuanian people, it is worth visiting Grutas Park. While not a typical memorial museum, it is a unique landmark and offers the chance to learn about a dark period of history in a less-grim environment. It is unique and absurd, but despite its critics, Grutas Park has created a national dialogue around the years of oppression and cruelty suffered by Lithuanians and the country’s national identity post-communism.

For those who would like to visit this interesting site, take a look at our Baltics tour. This tour visits Grutas Park on our way from Mikolajki, Poland to Vilnius.