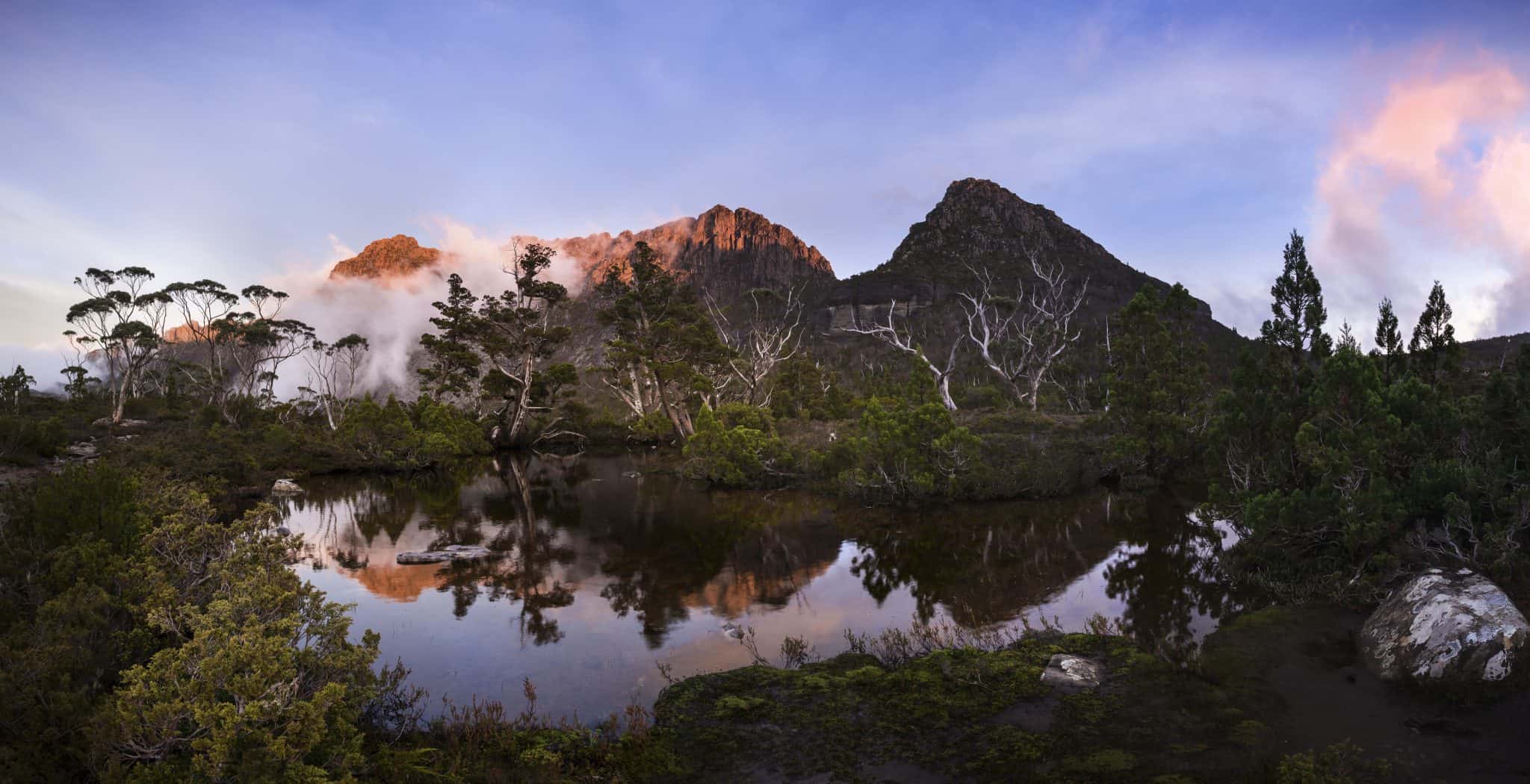 One of Tasmania‘s most iconic natural wilderness destinations, the stunningly beautiful Cradle Mountain is a highlight of any tour of Tasmania.

Cradle Mountain is an area of geological diversity. The region was part of a shallow see about 1100 million years ago. The seabed’s sand and silt became sedimentary rock, that was deeply buried, folded and then thrust up. Around 270 and 230 million years ago, two sedimentary layers covered the base rock, first with glacial marine sediments, and then with river deposits. Around 175 million years ago, dolerite forced its way up through the existing layers, spread out horizontally and hardened.

This dolerite has resisted erosion and now caps all but two of the highest peaks in the National Park. Deep valleys have been eroded into softer, underlying sedimentary rocks. Erosion near Lake Dove and Lake Windermere reveals the rock formed around 1100 million years ago. From 25, 000 years ago to 15, 000 years ago the landscape was shaped by glaciers, creating the glacial troughs of the Mersey and Forth Valleys.

Cradle Mountain National Park also includes an array of vegetation areas, ranging from rainforest to buttongrass moorlands. Look for the long-lived King Billy pine, pencil pine, and celery-top pine, all endemic to the National Park, as well as fagus or tanglefoot, Australia’s only native winter deciduous tree, the leaves of which change from pale green in spring to dark green in summer and orange in autumn, before dropping its leaves with the first snowfall. Fagus has an ancient lineage, having evolved over 65 million years, and is today found in South America, Papua New Guinea, New Caledonia, New Zealand, and parts of the Australian mainland and Tasmania.

The area’s perennial rain also shapes the landscape, adding colour to the snow gum and allowing for the vivid flowers of the scoparia. The gum-topped stringybark, one of the worlds’ tallest flowering plants, is found throughout the park.

The first people to live in the Cradle Mountain reached the area in the last Ice Age, when, as archaeologists have shown, Aboriginal people lived on the edge of the ice. They moved in as the ice receded, inhabiting the Cradle Mountain-Lake St Clair area for over 10, 000 years.

After colonisation, the area attracted explorers, loggers, trappers and graziers. However, its future was shaped by the mountaineer and botanist Gustav Weindorfer, who climbed the summit of Cradle Mountain on 4 January 1910. ‘This must be a national park for the people for all time’, he is said to have declared. With his Tasmanian wife, Kate Cowle, he built the Waldheim Chalet (German for ‘Home in the forest’) out of local King Billy pine, carrying baths and stoves on his back from the end of the cart track. Waldheim became a refuge for early bushwalkers and mountaineers, with Gustav and Kate providing entertainment and company to fellow nature-lovers. Visitors remember Gustav as ‘a wonderful host’. Carved in the wall was the motto, ‘this is Waldheim, where there is no time and nothing matters.’ Thanks to the Weindorfers efforts, Cradle Mountain was declared a scenic reserve in 1922 and later a national park.

The centre of the national park is the stunning vista of pristine Dove Lake, with Cradle Mountain looming behind. This area can be enjoyed through a number of walks, suitable for varying abilities. The Dove Lake circuit is an easy two-hour walk around the lake, which passes through patches of fagus (particularly stunning in autumn) and ancient rainforest. The Weindorfers Forest Walk tells the story of the Weindorfers conservation efforts, ending at their chalet, Waldheim, which has a display bringing their hospitality to life. More ambitious walkers can climb Cradle Mountain for sweeping view of the surrounding wilderness, or try the two-hour walk to Crater Lake, where the steep sides of the lake are covered in fagus.

The most challenging walk is the 6-day, 80 kilometre, Overland Circuit, which stretches from Cradle Mountain through to Lake St Clair National Park in the south. The circuit has long been by far Australia’s most popular long-distance walk.

Cradle Mountain National Park is also home to a number of species of native wildlife, including Tasmanian devils, quolls, platypus and echidna. While wombats are mostly nocturnal, it’s possible to spot them in the late afternoon in the area around Cradle Mountain. Wallabies and pademelons can be seen around the camping ground and around Waldheim.

While most UNESCO World Heritage Sites meet only one or two criteria for that status, Tasmania’s World Heritage Area meets seven out of ten criteria, only matched by one other place on earth – China’s Mount Taishan. Cradle Mountain is recognised for:

In addition, the Franklin-Gordon River National Park has been recognised as an outstanding example of ‘humanity’s interaction with the natural environment’ in the 35, 000+ years of Aboriginal settlement in the area, including the use of burning that created buttongrass moorlands.

Cradle Mountain is a one and a half hour drive from Devonport, and two and half hours from Launceston.

Odyssey Traveller visits Cradle Mountain as part of our new guided tour devoted to the history and wildlife of Tasmania. Beginning in Hobart, a historic city built into the foothills of kunanyi/Mount Wellington, our tour starts by exploring southern Tasmania with a day trip to the convict settlement of Port Arthur. The following day, we make a day tour of Maria Island, on the way up the east coast to Coles Bay and the stunning Freycinet Peninsula, home to the dramatic coastlines of Wineglass Bay.

Following our visit to Wineglass Bay, we leave the rugged coastline of Tasmania‘s east coast, and head inland to Tasmania‘s second city, Launceston, before our adventure continues on through the mountain wilderness of Tasmania‘s west coast. Finally we head inland, ending our trip in Hobart with a day tour of Bruny Island.

Every Odyssey guided tour is designed especially for mature and senior travellers, who want an authentic and informed experience of their holiday destination. While we take you to the major tourist attractions, our itinerary also gets off the beaten path. Our is led by an experienced tour operator, with the assistance of local guides chosen for their in-depth knowledge of our destination. Our tour price includes hotel accommodation, entrance fees, and a number of meals – breakfast, lunch, and dinner. For more information on our Tasmania tour, click here.

Click here for more on our other Australia tours.