Mount Nebo is the highest point of the Abarim mountain range that cuts across Jordan and which culminates in the Arabian desert in the south. Located in the historic city of Madaba, east of the Dead Sea, Mount Nebo is a revered holy site. According to the Hebrew Scriptures, Moses, who led the Israelites in an exodus out of Egypt across the desert for 40 years, stood on the summit of Mount Nebo and was granted a view of the Promised Land. Moses’ life ended not long after, and the area was also believed to be the burial place of the prophet, though the exact location remains unknown.

Mount Nebo is a treasured part of Jordan tours. Travellers can climb to the summit of the 800-metre mountain and view an exquisite panorama of parts of the Holy Land, visible on a clear day. The mountain peak offers a view of the Dead Sea, the West Bank city of Jericho in the Jordan River valley, and the hills of Jerusalem. Mount Nebo, in addition to being an important place of pilgrimage,  joins the UNESCO World Heritage Site of Petra, the ruins of Jerash, and the desert Wadi Rum (where Lawrence of Arabia was filmed) as Jordan’s famous tourist sites.

On the highest rocky outcrop of Mount Nebo (Siyagha, “monastery”) are the remains of a Byzantine church and monastery. It was built by early Christians in the 4th century in honour of Moses, but may have been constructed on top of an older structure.

The church, first mentioned in a pilgrim’s account dated 394 AD, follows a typical basilica pattern. The word “basilica” now denotes a title of honour to church buildings, but in ancient Rome it was used to describe any large roofed public building: market, meeting halls, courthouses, etc. Later, it came to denote a specific form of this building, an open hall with side aisles and a raised platform at one or both ends. In pre-Christian Roman architecture, the basilica also featured an apse, or a semicircular recess in a wall, to contain the raised platform. In a temple it would hold the statue of a deity; in a judicial building it would contain the magistrate. This form was adopted by early Christians for their place of worship. (Read more in our article on churches here.)

As Christianity spread, more and more pilgrims began arriving at Mount Nebo, and the church was expanded to cater to the increasing numbers. The Byzantine Basilica eventually became part of a monastery. It continued to be a site of pilgrimage for 600 years, until the area was abandoned in the 16th century. The neglected church and monastery were unearthed in excavations in the 1930s, and in 1993 the area was purchased by the Franciscans, a religious order within the Catholic Church founded by St Francis of Assisi. After several hundred years, it is once again an active monastery, encompassing the Franciscan Archaeological Institute. 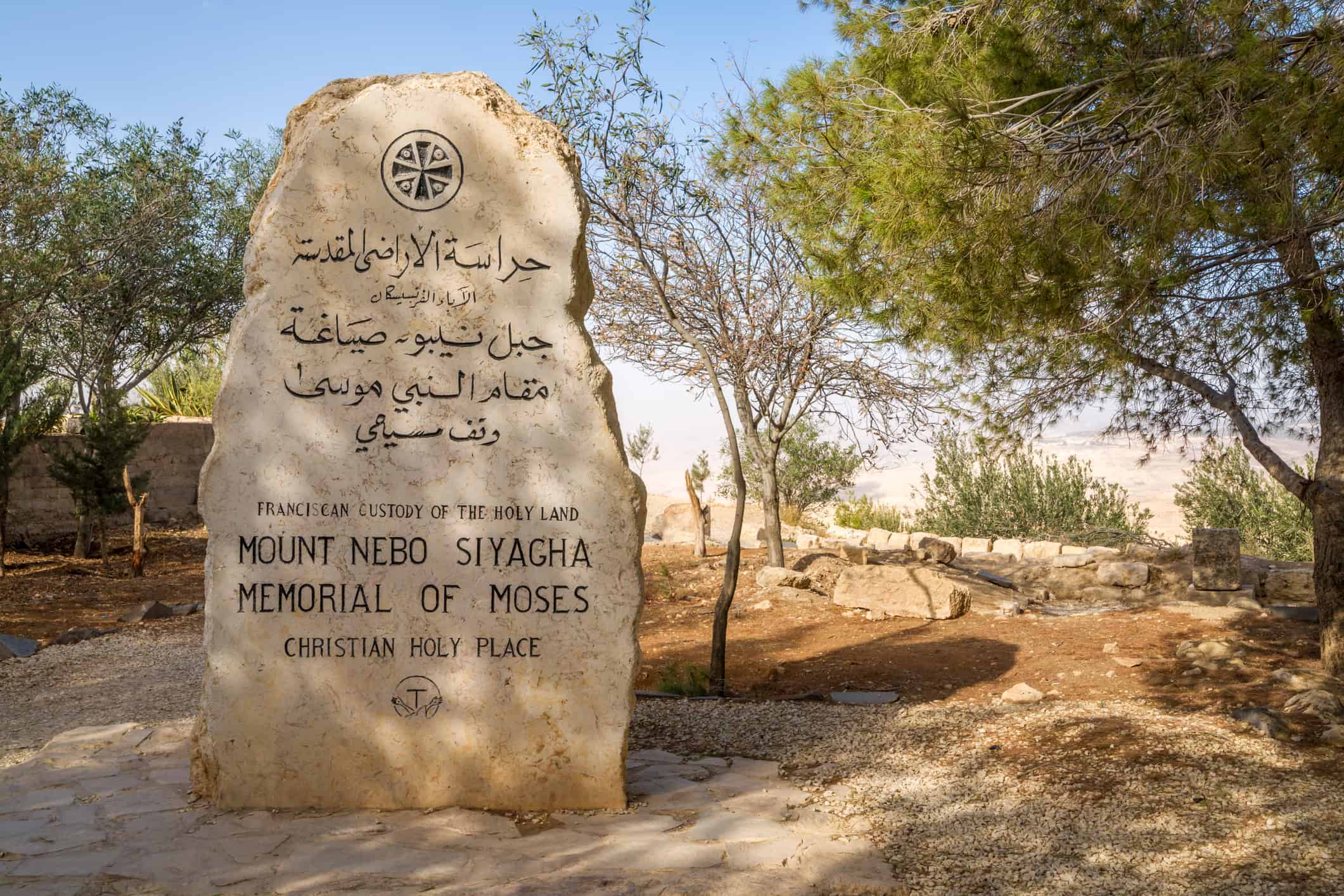 Elements of the 4th-century Byzantine church can still be seen in the modern church, now called the Church of Moses. The memorial church houses the original Byzantine mosaics. A cross dating from the 4th century sits in the altar.

After exploring Mount Nebo, travellers may visit nearby Madaba, which has the 6th-century St George’s Church, famous for housing the Madaba Mosaic, the earliest known map of the Holy Land and its pilgrimage sites. The Madaba Mosaic map is on the floor of the church, and was created in the year 560.