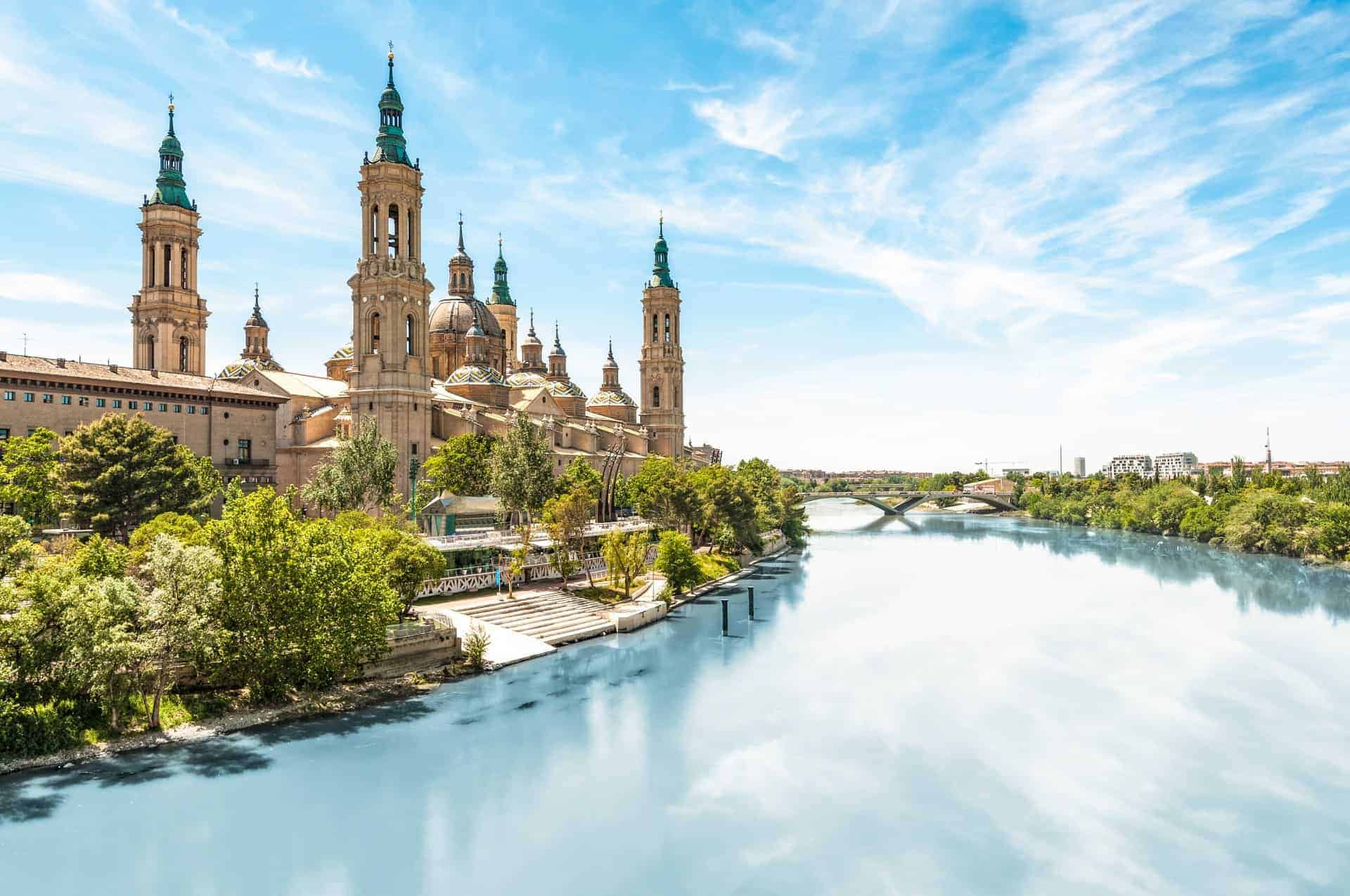 A tour of Zaragoza provides an opportunity to explore Roman ruins and the associated history. See amazing Moorish Architecture as well as learning about Mudejar Architecture and the Mudejar style in the fifth-biggest city in Spain, lying in the Aragon region of northern Spain. To visit Zaragoza is easy as this city is close to both Madrid and Barcelona. Home to beautiful Moorish architecture, Roman ruins, two magnificent cathedrals and a rich collection of street art, Zaragoza is often underrated as a tourist destination despite having a lot to offer. As well as this, the city has an incredible food scene and visiting the city‘s famous tapas bars is an amazing culinary experience and will give you a taste of Aragonese cuisine. Zaragoza is also the hometown of the artist Francisco de Goya, considered to be the most important Spanish artist of the late 18th and early 19th centuries. On Odyssey’s tour of Zaragoza, you can see his work throughout the city.

The History of Zaragoza

The Roman empire founded Caesaraugusta  (from which the present name is derived) between 25 BC and 11 BC. Up to 25,000 people migrated to the ancient city via the Ebro river and Zaragoza province prospered for almost three centuries under Roman rule until it was captured by the Visigoths in 472. During the Islamic period, it was the capital of the Upper March and eventually controlled by the Almoravids. On 18 December, 1118, Alfonso I, ruler of the Kingdom of Aragon, conquered the city and made it his capital.

In the years that  followed, Zaragoza province transformed into an important economic and cultural hub. Today it remains an industrial centre and the site of the annual National Trade Fair. In 2008, the city hosted Expo 2008, a world fair on water and sustainable development.

What to See in Zaragoza

Dominating Zaragoza’s skyline and overlooking the river is the beautiful Cathedral-Basilica of Our Lady of the Pillar which we visit as part of our guided tour. The striking Baroque Roman Catholic church a venerates Blessed Virgin Mary, under her title Our Lady of the Pillar and is thought to be the first church dedicated to Mary in history. The history of the site goes back to the earliest days of Christianity. The faithful believe that soon after the crucifixion and resurrection of Jesus, on 2 January 40 AD, while St James the Apostle (Santiago) was deep in prayer by the banks of the Ebro river, the Virgin Mary appeared to him and gave him a pilar of jasper and instructed him to build a church in her honour, saying ‘This place is to be my house, and this image and column shall be the title and altar of the temple that you shall build’. Around a year later, James is believed to have built a small chapel around the pillar in Mary’s honour. Over the centuries, multiple church structures have occupied the site, each one larger than the previous. The cathedral today, which features 11 brightly coloured domes, was commissioned by King Charles II in 1681. It is the second biggest church in Spain and you can visit the famous pilar, which is mostly concealed and topped by a 15th-century Gothic sculpture of the Virgin and child.

Another wonderful monument is the Cathedral of the Savior or La Seo de Zaragoza. It is considered to be the finest piece of Christian architecture in the Spanish city. It was built between the 12th and 17th century and is a mix of architectural traditions, featuring aspects of the Romanesque style, Gothic and Baroque. The cathedral’s museum is a fascinating tapestry museum and displays one of the finest collections of tapestries in the world.

The city‘s Aljaferia Palace (palacio de la aljaferia ) was built by Islamic rulers in the 11 th century and remains one of the finest examples of the era’s architecture outside of Andalucia. It has undergone many renovations over the centuries and was developed into more of a fortress in the 1590s. It was restored in the 20 th century and is as graceful as ever with intricately-carved archways and beautiful courtyard in the mudejar style. Aragon‘s regional parliament has been housed here since 1987 but it is open to the public and tours run throughout the day.

The Puente de Piedra is also known as the Stone Bridge or the Bridge of Lions due to the four lions placed on the pillars at the end of the bridge. It is a bridge across the Ebro river that was originally built in the 12th century and reconstructed in 1659. The reconstruction of the bridge was of great economic importance for the development of the Aragon regionand all the country. A great way to see the bridge is to take a riverside stroll along the pedestrian footpaths built for Expo 2008. Walking along the riverbanks of the Ebro also provides some good birdwatching opportunities.

A tour of Zaragoza would not be complete without some Francisco de Goya and one way to see a great expose of the artist’s work is at the Museo Goya right near the city‘s old town. Each of the three floors has a different focus with the second floor exhibiting Goya’s own work. You can also see Francisco de Goya‘s first self-portrait and his portraits of King Carlos IV and Queen Maria Luisa.
For a wonderful dining experience, head to the collection of lanes known as El Tubo, just by the Plaza del Espana, where you will find bars with tapas aplenty, as well as gourmet shops with Zaragoza delicias.

If you’re interested in seeing all Zaragoza has to offer, from churches and Moorish architecture that built the palaces to outdoor concerts and heaving tapas bars, you may be interested in our tour of Barcelona, which includes a day tour of Zaragoza and visits both the Basilica and palacio de la Aljaferia(Aljaferia palace) as part of the walking tour program. 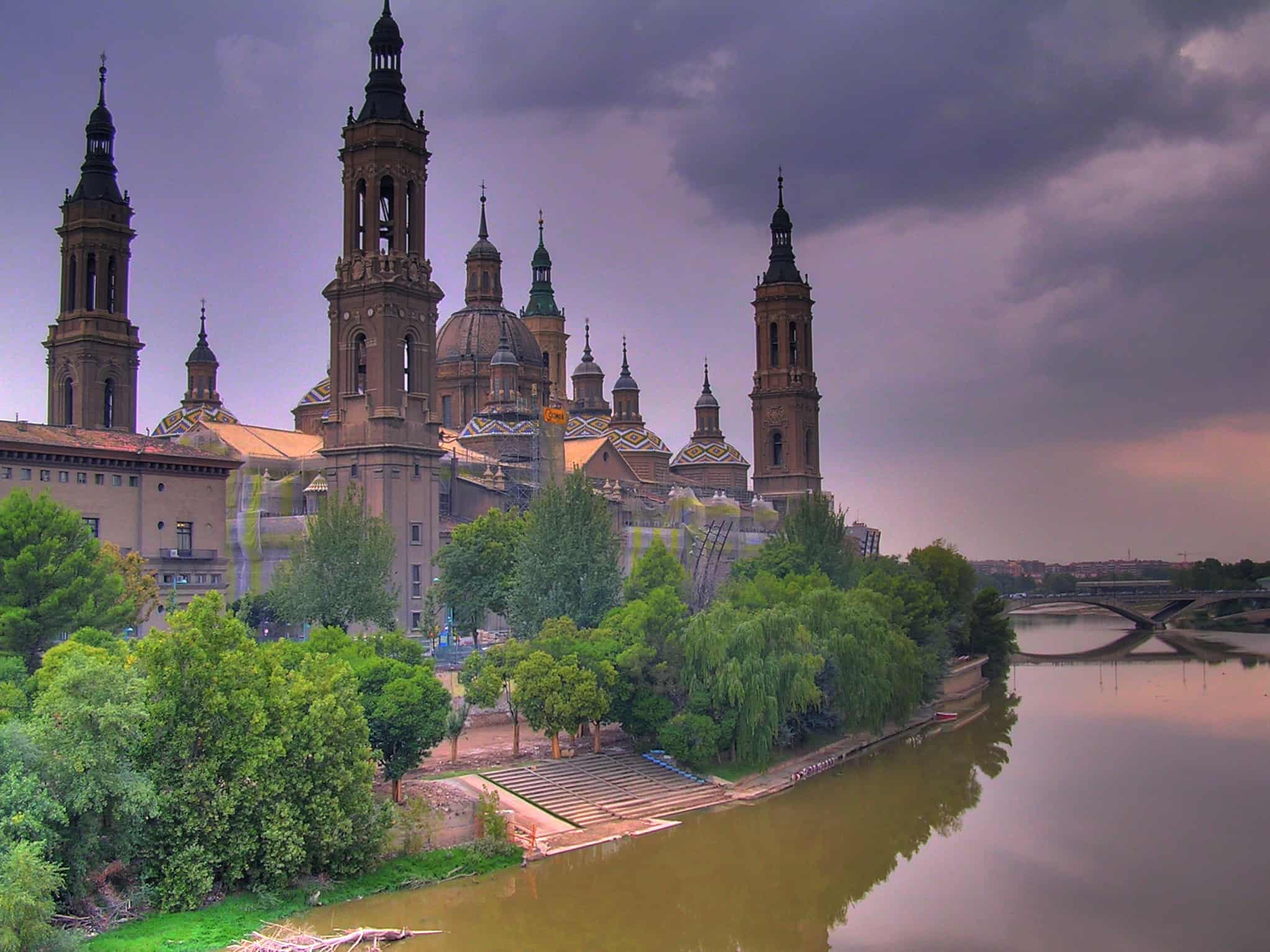