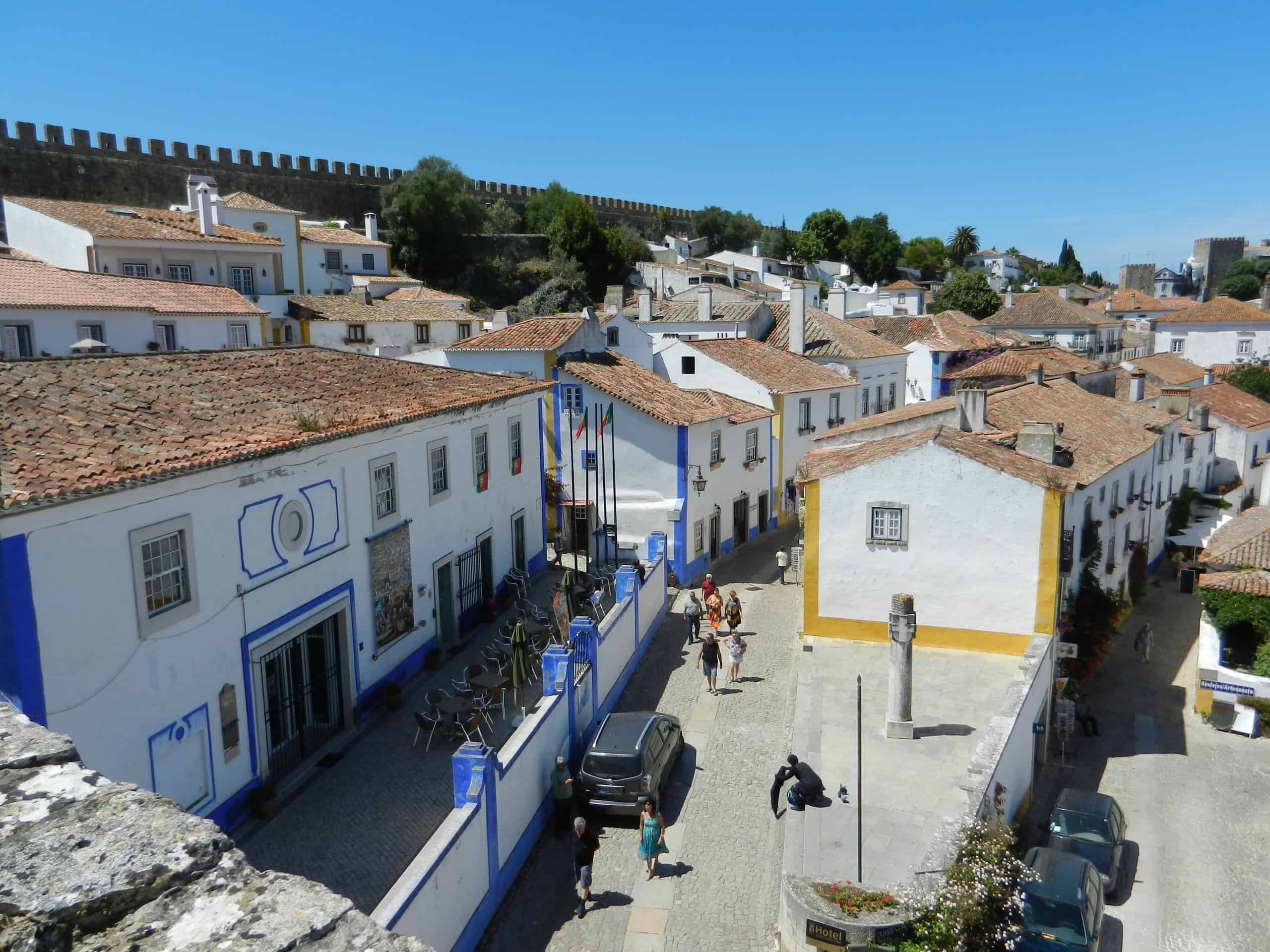 A tiny, charming town with over 3000 inhabitants, Obidos is an hour from Lisbon and feels like stepping back in time. The medieval town’s historic centre features picturesque cobbled streets and traditional white houses, surrounded by a crenellated castle wall which is accessible by foot. The entire scene is like something out of a story book, enhanced by the surrounding hilly landscape. Many people visit Obidos on a day trip from the capital and it is also less than 10 km from the medium-sized city of Caldas da Rainha.

The History of Obidos

Humans have settled in the area of Obidos since the Lower Palaeolithic period and it was once Celtic settlement and an important trading post for the Phoenicians before becoming an important Roman military settlement. After the fall of Rome, the Visigoths captured the region but sometime after 713 the Moors built a fortification on the hillside of Obidos and laid out the streets. In 1148, the area was taken from the Moors by the first king of Portugal, Afonso Henriques, who commissioned the castle that remains the town’s most famous landmark.

In 1228, King Dinis I took his wife, Elizabeth of Aragon, to Obidos and she fell in love with the hillside town. In response, Dinis made the town a wedding gift to his queen, starting a tradition that would remain in place until the dissolution of the royal family in the 19th century. In this way, the town is tied up with the history of Portugal itself, however, after this point the castle remained unoccupied for some time. Up until the 15th century, the town overlooked the sea but the bay gradually disappeared and the town is now landlocked.

Both the earthquake of 1755 and the Peninsula War of the 19th century led to the castle and its walls being damaged but repairs were made and thankfully the little town retains its medieval charm.

What to See in Obidos

One of the absolute highlights of visiting Obidos is walking the city’s Moorish walls and admiring the amazing views of the magnificent town completely contained below. Majestic and fully intact, the 1.5km looped wall reaches as high as 13 metres in some spots and there are four separate staircases from which you can access the wall. A walk around the perimeter takes around an hour but there is no guardrail and it can be narrow in parts. From the walls you can not only see down into the town but you can see the surrounding scenery, including the Obidos Lagoon, one of the town’s most recognisable landmarks after the castle. The lake lies on the coast and opens up into the ocean. It is the largest saltwater lake in Portugal and its spot on the coastline, surrounded by beaches, makes it a popular destination for swimming and other water sports. A walk along the walls is a great way to see the mix of landscapes that surround Obidos, from the coast to the hills. The castle itself is a little younger than the walls, built in the 13th century and transformed into a Manueline palace in the 16th century.

Today, the castle has been converted into a beautiful luxury hotel and high-end restaurant called the Pousada of Obidos. Some of the rooms still have stone walls and four-poster beds and are named after the famous monarchs who have stayed in the town. In 1951, the castle was classified as a National Monument of Portugal and many historical artefacts, including the furniture and other precious items like paintings, were brought to the castle. The castle is open to the public, even if you are not staying there, so you can wander around the castle and note these impressive features.

Obidos is also known for the traditional Portuguese drink ginja. A sour-cherry liqueur, a version of ginja has been made since Roman times but originated in its current for from a 17th century monastery recipe. On the main street in Obidos, Rua Direita, you will find many shops selling the drink served in dark chocolate cups you can eat afterward.

One of the best things you can do in Obidos is to simply explore its beautiful cobbled lanes and get lost in the medieval architecture. Gor for a stroll through the streets and you will find restaurants, bars, bookshops and other hidden gems tucked away in the little streets as well as other important sites such as the Renaissance-period Santa Maria Church and Paço dos Alcaides, a 16th century style palace. For the nights, there are plenty of places to try traditional Portuguese fare.

If you’re interested in visiting the unique town of Obidos, have a look at our Discover Portugal group tour or our small group tour of Lisbon and Portugal. Both tours visit Obidos and travellers enjoy a sightseeing tour and see all the key monuments of the city. For more tours in Portugal, please have a look at our country profile.