Highlights of Egypt: The Pyramids and the Sphinx 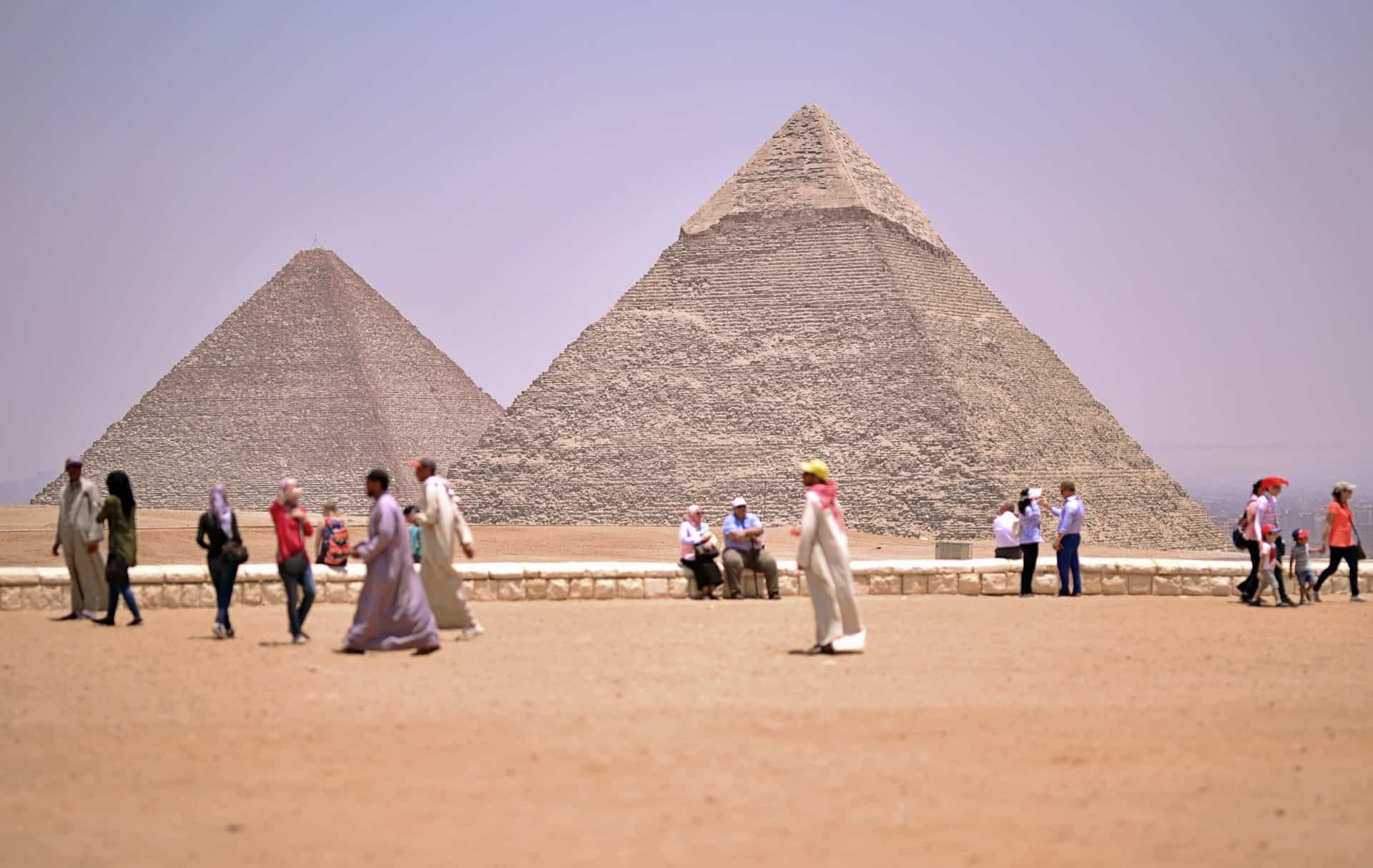 Highlights of Egypt | The Great Pyramids of Giza and the Sphinx

Egypt is home to one of the only remaining wonder of the Ancient World: The Great Pyramids of Egypt. The pyramids are monumental tombs for pharaohs from the 4th dynasty and relics of Egypt‘s Old Kingdom era of ancient egyptian civilization constructed around 4,500 years ago. It is not hard to see how the giza pyramid collection is one of the Seven Wonders of the Ancient World. Even by today’s standards, they are an incredible feat of engineering and just as awe-inspiring and magnificent in the 21st-century as they would have been millennia ago. Today, just a short journey for Cairo,  they continue to fascinate and bewilder visitors, travellers, historians and archeologists who cannot fathom how exactly the Giza pyramid were built and how this Ancient Egyptian civilization would have transported, quarried and raised some 2.3 million white limestone blocks, that would have weighed almost 3 tonnes each. The construction of the nearby enigmatic monument of the sphinx statue (Sphinx Egypt) is equally puzzling, a 74 m long monument carved out of the limestone bedrock of the Giza Plateau.

When people talk about the Pyramids of Giza, they are usually referring to three pyramids constructed in ancient timesbetween 2589 and 2504 B.C.(bce) The ancient Egyptian pyramids of Khufu, Khafre and Menkaure were built in that order, constructed by their monarchical namesakes, King Khufu, pharaoh Khafre and pharoah Menkaure as mortuary complexes.

The Great Pyramid of Khufu

The Great Pyramid of Khufu (also known as Cheops) was commissioned by pharoah Khufu, the second pharaoh of the Fourth Dynasty and the son of Sneferu and Queen Hetepheres I. Khufu‘s Pyramid is the most iconic of the pyramids on the Giza plateau and was the largest human-built structure in the world until the Eiffel Tower was erected in 1889. Egyptologist state that the project took 23 years to complete and the pyramid was built using conscripted labour. Once completed, it stood at 146 metres tall (approximately the height of a 30-storey office building). Today it stands at around 138 metres tall and is surrounded by three smaller pyramids, often called the Queens’ Pyramids which may have been built for Khufu‘s three wives.

Originally the Great Pyramid had an outer casing of white limestone that has since stripped off but it is said that the huge blocks of limestone were put together so perfectly that even a knife blade could not be inserted between each block.

Khafre’s Pyramid and the Sphinx

Khufu’s son, Khafre, built the second pyramid at Giza, circa 2520 B.C. While it is not clear who Khafre’s mother was, many archaeologists posit it may have Queen Meritites I, because of an inscription written in her honour by Khafre. Khafre’s temple was built on slightly higher ground than Khufu’s, so that it would appear taller, but it is smaller and shorter than the Great Pyramid at 136 metres tall. Some fragments of the original polished limestone casing are still visible.

You will find the pyramids guarded by a magnificent and colossal sphinx statue . The Great egyptian Sphinx , a huge limestone sculpture of a mythological creature in repose with a lion‘s body and a human head, is credited to Khafre. It is believed to be modelled on the Pharaoh and erected to act as sentinel for the pyramid complex. Over the years, the statue‘s stone has suffered damage from wind, groundwater and air pollution but traces of red and blue pigment suggest that it was once a far more colourful statue . It is also missing its nose and while no one knows how the great sphinx‘s nose was lost, egyptian archaeologist and scholars argue it was shot off by 16th-century Turks or by a cannonball fired by Napoleon’s soldiers. Today much effort goes into the preservation and protection of the egyptian Sphinx and to prevent this egyptian sculpture being damaged further by weathering. Geologists and archeologists worry that the head of the famous sphinx may collapse because the neck has been weakened by erosion. The area under the head is particularly prone to erosive elements because of its delicate and fragile nature.

Menkaure was Khafre’s son and built the smallest of the three pyramids, which stands at 65 m tall. It is approximately 1/10 of the size of Khufu’s pyramid. Built around 2490 B.C., scholars of Egyptology theorise that the size of the pyramid indicates a shift in focus from building these kinds of tombs to erecting extravagant temples to the gods. Menkaure died before his pyramid was finished and the work was completed by his son Shepseskaf. Thought it is small, the pyramid features the most complex mortuary temple and inside you descend through three distinct levels.

Each pyramid was built as a tomb designed to protect the king’s body and help the king ascend to the afterlife with the goods he would need. The discovery of a sarcophagus in each of the pyramids supports the idea that they were places of burial. However, the tombs would not be their final resting place. While it is believed that each king was buried in his pyramid, bodies were never recovered from the sites, which indicates the graves were robbed sometime throughout the centuries. All the grave robbers left behind were the broken sarcophaguses which they presumably could not carry out of the pyramid’s causeways. It is likely that the resting places of the kings, therefore, will always remain a mystery.

The Giza pyramids in Egypt are like nothing else in the world. Rising inexplicably from the desert, they remain a true testament to the planning and engineering skills of the ancient Egyptian people and their dynastic rulers. Today, visitors can admire at the entire complex and visit all three pyramids and the Sphinx, roaming the hidden chambers and marvelling at the antiquities and archaeological wonders associated with the pyramids. These structures have so much history within their walls and contain the secrets of an ancient civilisation, whose works and crafts continue to teach us today.

The Great Pyramids of Giza and the Sphinx can be found 20 km south of Cairo (approximately a half an hour drive). On Odyssey’s Egypt Tour, we visit the pyramids with a tour leader and local guide. As no image is more prized than that of the traveller riding a camel at Giza, we arrange for members of our party to enjoy a short camel ride with the Pyramids as the backdrop. The tour will also offer the opportunity to explore more Egyptian antiquities and other iconic landmarks. Whether you are a budding geologist, keen archaeologist or simply interested in the origins of Egypt and its fascinating history, this tour is sure to teach you something.