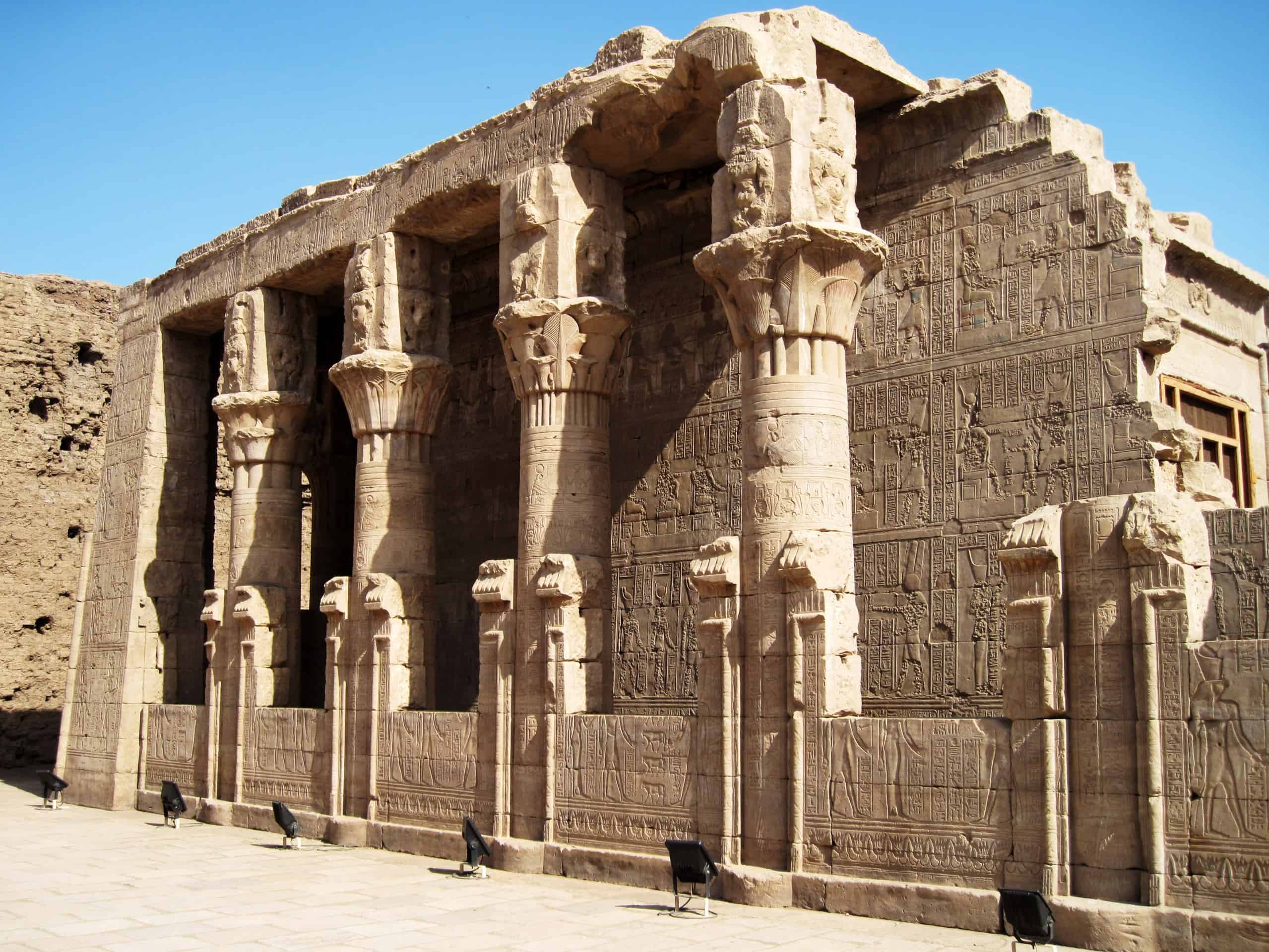 Egypt’s Philae Temple is one of the most picturesque in the country and the complex is one of the most fascinating ancient sights in the world. Built to honour Isis, the goddess of magic, fertility and motherhood, and death, healing and rebirth, the temple was originally located on Philae Island. Construction of the current temple complex was started by Nectanebo I, a 30th-dynasty pharaoh, and added to over time by Greek, Roman and Byzantine rulers. In the early 20th century, with the construction of the Aswan Low Dam, the temple complex was flooded and UNESCO launched a preservation project and had the temple relocated to higher ground to prevent it from becoming submerged by the rising waters. Now it sits on Agilika Island just south of the old Aswan Dam.

Often referred to as the Temple of Isis as well as the Philae Temple, it is the last temple built in the classical Egyptian style. Construction of the temple began around 690 BC and it was one of the last remaining places where the goddess was worshipped after the arrival of Christianity in Egypt. The temple officially closed in 550 AD and was used as a church by early Christians.

The Significance of the Philae Temple

Philae in Greek or Pilak in ancient Egyptian means ‘the end’, probably because the island was used to define the southern most limit of Egypt and its boundary with Nubia. From early Egyptian times it was sacred to Isis because it was believed to the be one of the burial places of the god Osiris, her brother and husband. While evidence shows that temples existed on the island from at least the 6th century, the oldest surviving structure today is the Temple of Isis itself which dates back to approximately 380 BC.

Isis is an important figure in the ancient world, being both a major goddess in ancient Egyptian religion and worshipped in the Greco-Roman world. The goddess of fertility and motherhood, she is seen as a giver of life and protector of kings but also is believed to help the dead into the afterlife. According to the Isis-Osiris myth, Isis was the daughter of Geb, god of the Earth, and Nut, goddess of the Sky. She married her brother, the divine king Osiris, and produced his heir, Horus. When Osiris was murdered by Set, she resurrected her slain husband using her magical skills.

In the first millennium BC, Isis and Osiris became the most widely worshipped of the Egyptian deities. Rulers in Egypt and its neighbor to the south, the ancient region of Nubia, began to build temples dedicated primarily to Isis and her temple at Philae became a place of worship for both Egyptians and Nubians. Her magical power was considered to be greater than that of other gods and she was seen as protecting the kingdom from its enemies. The myth was very significant to ancient Egyptians who believed the Nile River flooded every year because of the tears Isis wept for Osiris.

Those who arrive to visit the Philae temple complex today arrive by boat and start their visit at the oldest part of the Temple of Isis, known as the Kiosk of Nectanebo. The entrance to the temple is marked by an 18m-high First Pylon, a monument designed to guard the entrance and decorated with reliefs of Ptolemy XII Neos Dionysos smiting enemies.

After passing this First Pylon, travellers will find themselves in the temple forecourt from which there is entry to various rooms. One of these is the mammisi or birth house was dedicated to Horus, the falcon-headed god and the son of Isis and Osiris. Reliefs in the mammisi depict scenes from Horus’ childhood.

The Temple of Isis is the Philae Temple complex’s main attraction but there are plenty of other monuments to see as well as beautiful carvings and inscriptions throughout. The Temple of Hathor was built by the Ptolemaic kings Philometor and Euergetes II and added to by Emperor Augustus. It features reliefs of musicians (including a particularly delightful one of an ape playing the lute), Bes, the god of childbirth and a scene of Augustus presenting offerings to Isis and her sister, Nephthys. The Kiosk of Trajan or ‘Pharaoh’s Bed’ is an unfinished but elegant pavilion by the water’s edge and was a favourite subject for Victorian painters who would moor their boats beneath it.

Two ancient Coptic churches as well as the remains of a Coptic monastery were discovered when the original temples were transferred to Agilika Island. There is also evidence to suggest that there was a Bishop of Philae in 362 AD and columns on the island with Coptic crosses carved into them show how Christians transformed the complex from a place of Pagan worship to a Christian one in the Byzantine era.

On our Odyssey tour of Egypt, we take a four day cruise down the Nile. While on the cruise, we take a tour of the Aswan High Dam, Egypt’s contemporary example of building on a monumental scale before we proceed to see the granite quarries that supplied the ancient Egyptians with most of the hard stone used in pyramids and temples. From there, we continue by a short motorboat ride to the Temple of Philae. If you like to read more about our Egyptian tour and travelling to Egypt, feel free to explore our articles on Egypt.

One of the most popular things to do is to visit the Philae Temple at night and see the magnificent sound and light show. The image of the island’s ruins illuminated and bathed in light is incomparable and the show uses colored lights, lasers and narration to resurrect the pharaohs and bring the compelling myth of Isis, Osiris and Horus to life. It is truly magical experience.

The Philae Temple complex has a turbulent history having been saved from the waters of the Nile and reassembled like a giant jigsaw puzzle over ten years. The efforts to preserve it make sense once travellers take in the beauty of the Temple of Isis and the associated temples and recognise the insight the complex provides into Egyptian history and the importance of paganism for ancient Egyptians. It is easy to see why the temples were saved from destruction and today the complex offers an unparalleled insight into how the story of Egypt unfolded.