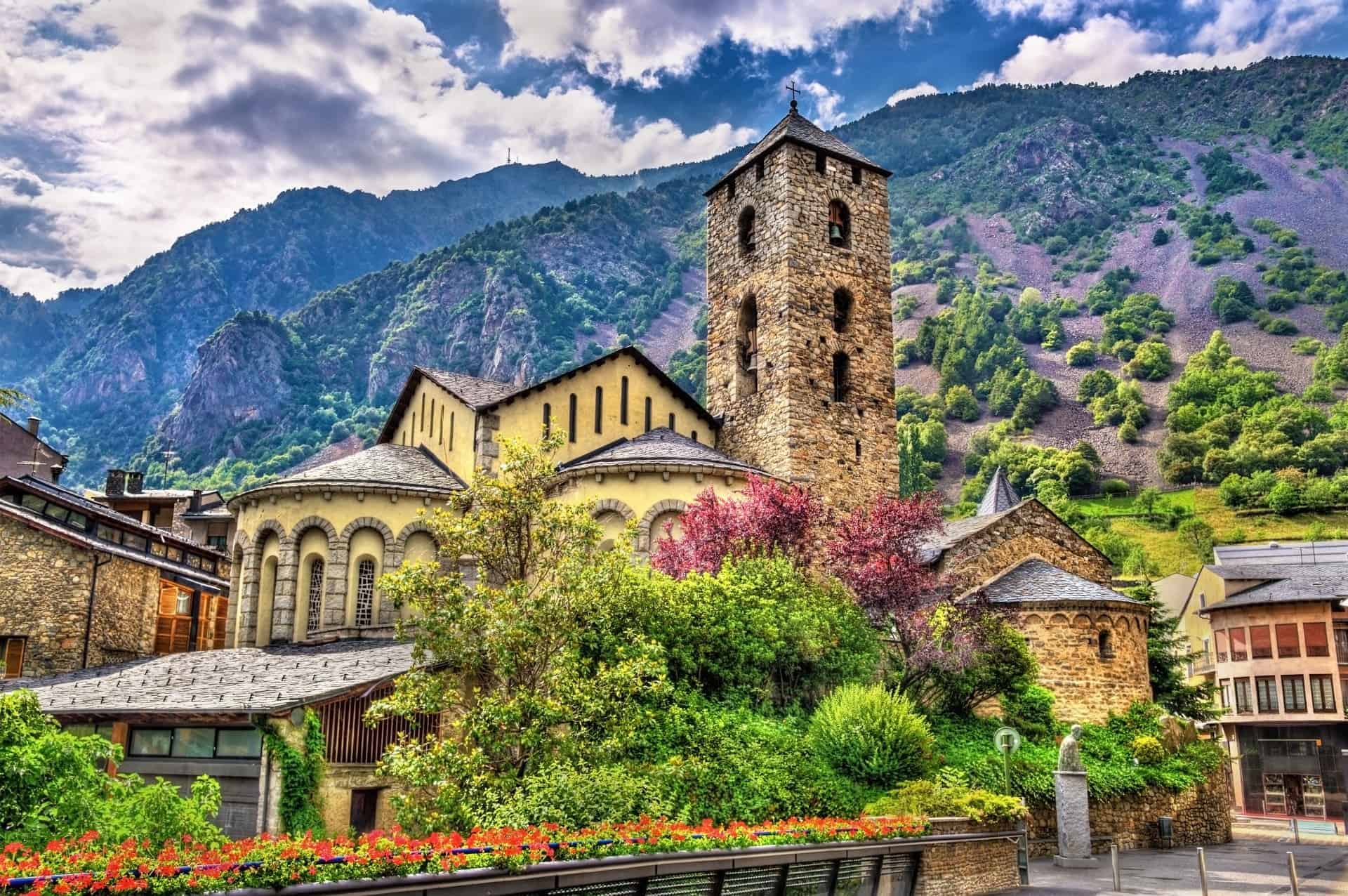 One of Europe’s micro-states, you will find the principality of Andorra tucked away in the Pyrenees Mountains between France and Spain. A tour of Andorra includes visits to a UNESCO world heritage site with quaint villages, stunning ski resorts and plenty of mountain views, this tiny country has beautiful natural surroundings and a bustling capital full of character. Although many people don’t even know it exists, this doesn’t mean there is nothing to do. When you visit Andorra whether you’re a historian, a hiker, or skier or shopper you will find the principality of Andorra has something to offer.
Andorra has a population of around 80,000 (it is the 11 th least populated country in the world) and the official language is Catalan. Other major languages are Spanish and French. Andorra is not a member of the EU and the co-heads of state are the bishop of Urgell, Spain, and the president of France. There are no international airports in the tiny principality, meaning it is only accessible by road. However, there are four international airports within 200km of Andorra so many people fly into Toulouse, Carcassonne, Girona or Barcelona. From Barcelona, Andorra is a three-hour drive.

The History of Andorra

After the fall of the Roman Empire, the area that is now Andorra came under the control of the Visigoths. The Visigoths remained in the valleys for 200 years, during which time Christianity spread. When the Muslim Empire began conquering most of the Iberian Peninsula, replacing the Visigoths, Andorra was sheltered from the Moorish invaders by the Franks. Legend has it that Andorra was created in 805 by Charlemagne, King of the Franks, as recognition of the locals for their fighting against the Moors. After Charlemagne’s death, Andorra was granted to Spain’s Count of Urgell by Charles the Bald, Charlemagne’s grandson.

In 988, the Count of Urgell, Borell II, gave the Andorran valleys to the Bishop of Urgell, in exchange for land in Cerdanya. Since then the Bishop of Urgell has been the co-prince of Andorra. In 1278, a pariage agreement was signed and Andorra adopted joint allegiance to a French and Spanish prince. It is this format of a shared government that endures today.

From 1789 to 1806, Napoleon rejected France’s ties with Andorra and left Andorra to its full independence but then reestablished the Co-Principate in 1806. During World War II, Andorra remained neutral and became an important smuggling route between its two neighbours, Vichy France and Francoist Spain.

The first Andorran Constitution was passed in 1993, establishing a parliamentary government. The first elections under the new constitution were held later that year and Andorra joined the United Nations and Council of Europe.

What to See in Andorra

Andorra is well and truly perched on the top of the Pyrenees and for this reason, many people come for the mountains. You can ski all year round, there are vertical drops of up to 1000 metres, runs of several kilometres over open slopes and groomed pistes. Gran Valira in Andorra is one of the biggest ski resorts in the world and features 118 slopes and 210 km of ski pistes.

Nestled in a green valley, you will find you will find the capital city of Andorra la Vella . The country’s capital city has cobblestoned streets, beautiful houses and panoramic views of the surrounding mountains. Casa de la Vall, the home of the former Andorran government, is a must-see. Built in 1580 as a home for a wealthy family, it was acquired by the government in 1701 who used it as the home of the government until 2011 when it moved to a new building. Today, it is open to visitors and gives you a unique insight into the country’s history.

Romanesque art and architecture are also something one can explore in Andorra and there are over 40 churches that date back to medieval times. The oldest church in the country is the Church of Santa Coloma . The Santa Coloma church‘s nave is thought to have been built in the 8th or 9th and the four-storey Lombard-style circular bell tower was built in the 12th century and still stands intact. The church’s chancel was decorated with a series of fresco murals that have traditionally been attributed to the Master of Santa Coloma and free guided visits of the church run in summer.

The Avinguda Carlemany is mostly pedestrian and strolling along it is a great way to take in the city.

If you’re interested in visiting this small but unique country, consider taking a tour to Barcelona and including a tour of Andorra in the intinerary. On our Barcelona tour, we take a day trip to Andorra and visit Andora la Vella.