Located right in the centre of the Mediterranean, the Italian island of Sardinia often feels a world apart. Sardinia was renowned in the ancient world for its obsidian, which was traded throughout the region to make sharp tools and arrowheads. The native Sards were successively overrun by Phoenicians, Carthaginians, Romans, Vandals, Byzantines, Arabs, Spaniards and finally Italians. All these diverse peoples had a hand in the making of today’s Sardinia.

Just like the Italian mainland, there’s plenty to see here. Travellers visit and enjoy a bike tour, walking tour, boat trip, or a drive down the coastal road to enjoy Sardinia’s beautiful sights. On a self-guided tour or on a tour with a small group with Odyssey Traveller, visit the imposing archaeological ruins of the ancient city of Nora, which passed from Carthage to Rome before being abandoned in the 9th century. Nora is Sardinia’s best example of a Roman provincial city, with paved streets over a sewage system, a forum, temples, a theatre, baths, and a medical centre dedicated to the Greek god of healing, Aesclepios.

Explore the historic capital, Cagliari,or the medieval city of Alghero. Cagliari stands on Sardinia’s best harbour. The Stampace quarter in the lower town is picturesque and best known for the church dedicated to Cagliari’s patron, Sant’ Efisio. Alghero, on the west coast, overlooks a great bay with some of Sardinia’s finest beaches, making it a leading tourist centre.

See the distinctive 12th century Romanesque Basilica di Saccargia. Befitting its Mediterranean location, Sardinia also has a beautiful coast. Escape to the granite islands of La Maddalena and the lagoons of the Sinis Peninsula, or go on a leisurely walk on the white sands of stunning Cala Goloritzè.

And make sure to tuck into the local cuisine! Sardinia offers Italian food, but with a regional twist: there is sarda (Sardinian sausage), porcheddu (suckling pig), and fregula, a pasta akin to a large-grained couscous, served with North African-inspired saffron. Visit a seaside local restaurant and enjoy a lively dinner with a view of the coast.

Odyssey travels by coach and occasionally uses local transport, including trains and ferries. Specifics are always outlined in your tour itinerary. Bus routes run through the main towns of Sardinia and are reliable and inexpensive. Smaller villages are also accessible by bus, though services are more infrequent. Trains link the major towns of Sardinia, though are a slower option than buses.

The island of Sardinia lies 200 kilometres west of the mainland of Italy and covers an area of 24,090 square kilometres. Much of the terrain in Sardinia is mountainous, with mountainous of granite and schist dominating the island’s landscape. Sardinia’s mountains are split by valleys and rivers, while scrub and grassland covers much of the countryside’s uncultivated areas.

Sardinia has a Mediterranean climate, with warm summers and cool winters. Depending on when you intend to travel, check the weather reports and dress accordingly.

Su Nuraxi di Barumini, a archaelogical site featuring a village complex and a network of defensive structures built by the former Nuraghe people.

The cultural heritage and traditions of many of Sardinia’s towns are celebrated through festivals and events held throughout the year. The patron saints of Sardinia’s cities are treated with reverence and respect, with many cities holding festivals in their honour – for example, the Festa di San Simplicio is held in honour of the patron saint of Olbia, and features costumed parades, poetry and songs. One of the more eye-catching annual events in Sardinia is La Cavalacata – held in Sardinia’s second city of Sassari, the festival is marked by colourful processions, dancing and thrilling horse races. The agricultural produce of the island is celebrated through numerous regional fairs and events, including the Sara della Castagne Chesnut Fair in Aritzo and and the Artichoke Festival in Uri.

Archaeology and History in Sardinia from the Stone Age to the Middle Ages, by Robert J. Rowland and Stephen L. Dyson
Sweet Myrtle & Bitter Honey: The Mediterranean Flavors of Sardinia, by Efisio Farris and Jim Eber
Legacies of Violence: History, Society, and the State in Sardinia, by Antonio Sorge
Sunflower Landscapes of Sardinia, by Andreas Stieglitz.

While Sardinian food has been influenced by cooking techniques from the Italian mainland, the island’s cuisine has retained a distinctive local flavour. Meat, seafood, bread and cheese are all staples of the Sardinian diet, with the island’s food sourced from the fields and waters that surround it. The most popular type of bread is pane carasau, a thin, circular flatbread, and is often served with meat and cheese on an antipasto board. Sardinia has many local pasta recipes and variations, including fregola, semolina pasta balls that resemble couscous, and malloreddus, which is made from semolina flour and has a curved, oblong shape. Meals in Sardinia are often concluded with a chilled serving of limoncello, a lemon-flavoured liqueur.

Generally speaking, Sardinia is safe to travel in, though always exercise common sense while travelling. Bag snatching and pickpocketing does occur, so keep your valuables close and pay attention to your personal security.

Whenever you travel overseas, it’s always wise to take an appropriate travel adaptor. The electricity supply in Sardinia runs at 230V and 50Hz. Sardinia uses Type F and Type L electric plugs, so make sure you have the right travel adaptor with you. 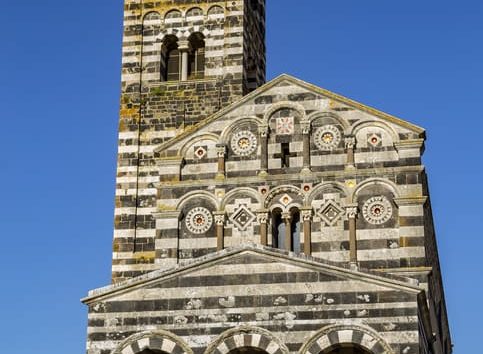 Basilica di Saccargia, a distinctive 12th-century basilica which stands as a striking example of Romanesque architecture. 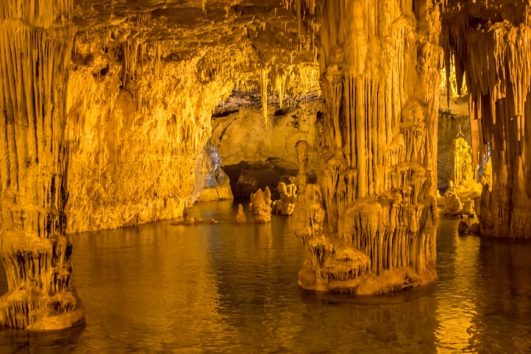 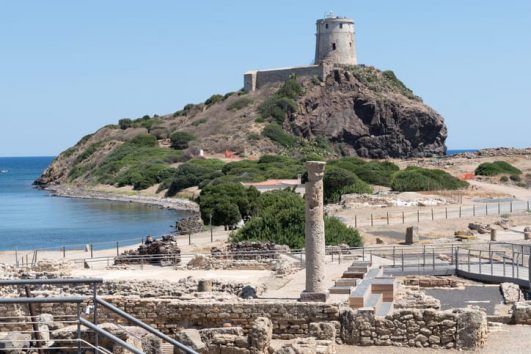 Nora, featuring the physical ruins of the former Roman trading town of Nora.

Is tipping customary in Sardinia?

If you’re on an Odyssey tour, we take care of tipping so you don’t need to give it a second thought. However, in your free time, or if travelling independently, it’s essential that you tip an appropriate amount for services. Tipping is not customary in Sardinia, though tips are appreciated, especially if service was to an exceptional standard. A small tip of a few euros to hotel staff for decent service is appropriate, while many will round up the bill for restaurants and taxis.

WiFi should be freely available in most hotels, cafes and restaurants.

Can I use my mobile/cell phone while in Sardinia?

Check with your cell phone provider to see whether you’re able to make calls and use data while in Sardinia. Many providers will allow you to pay a daily fee that allows you to make calls and check the internet while only being charged your regular rates. However, be certain to inform your provider that you’re heading overseas, because just like a bank they can turn off your service as a result of unusual activity.

External articles to assist you on your visit to Sardinia.