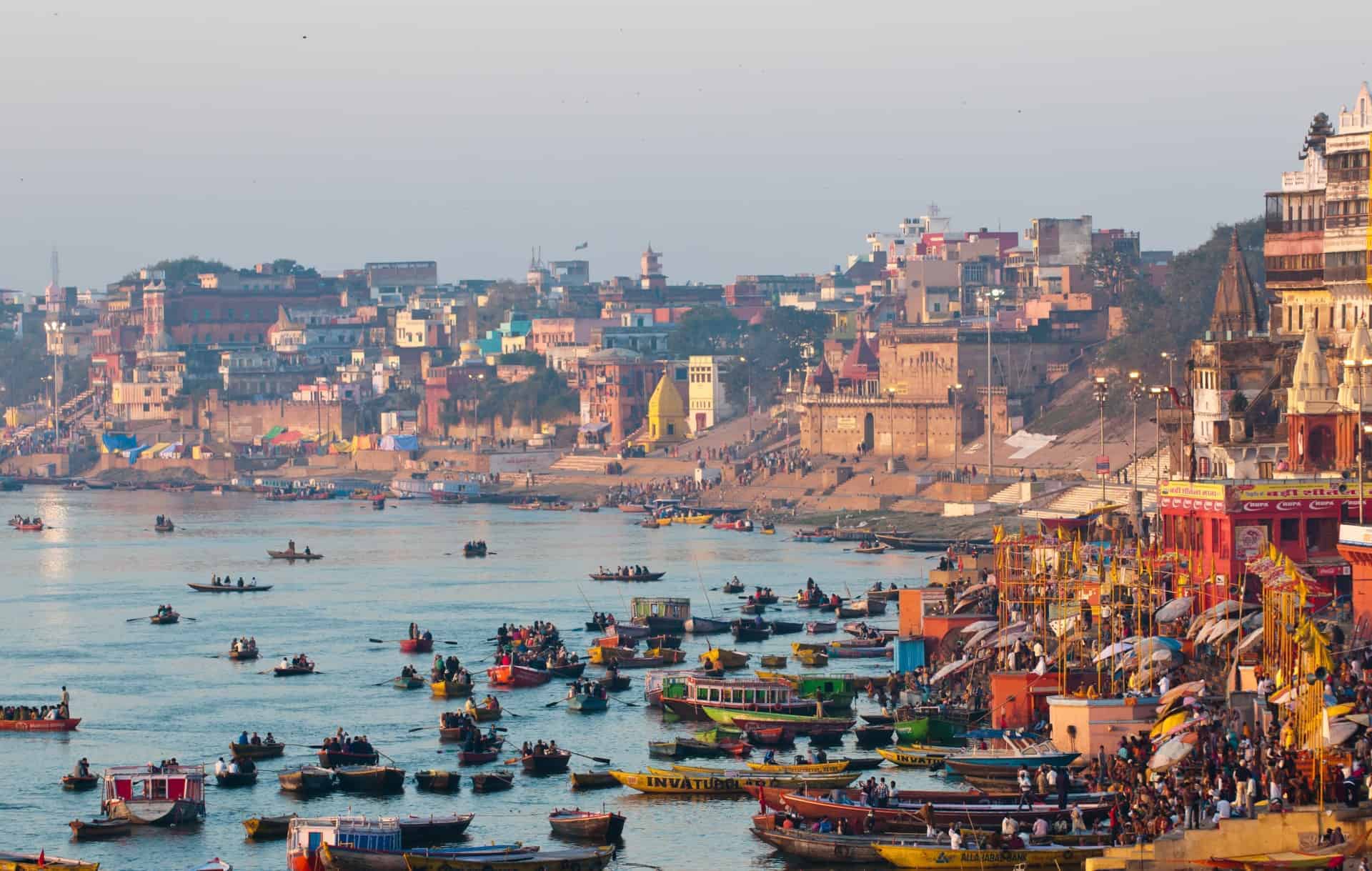 Often called the City of Lights, Varanasi is one of the world’s oldest inhabited cities. Colourful, intense and mystical, it is the spiritual capital of India and the country’s holiest Hindu city, located on the banks of the river Ganges in Uttar Pradesh.

Varanasi is a city of pilgrimage for many Hindu and Jain people. Known as the city of Shiva, one of the principal deities of Hinduism, it is auspicious to die in Varanasi, as those who die here will be liberated from the cycle of reincarnation. Pilgrims travel from all over the world to wash away their sins in the sacred water of the Ganges, the river that runs through the city, to cremate their loved ones and to die here.

For travellers, visiting Varanasi is a cultural experience like no other and the most interesting part of being in the city is just observing what takes place around and the many rituals going on throughout the day. Watching the world go by is a completely different experience when one is amidst the chaos and colour of this holy city with its mesmerising rituals of life and death.

The Ganges River flows directly through Varanasi and along the river you will find numerous ghats. Ghats are embankments made of concrete steps where pilgrims perform religious rituals. Varanasi has at least 84 ghats and these are used for bathing by pilgrims and for the Hindu puja ceremony. There are a few ghats in Varanasi that are used exclusively as Hindu cremation sites and this includes the Harishchandra Ghat. One popular tourist activity is to take a sunrise boat trip down the Ganges and see the locals on their way to the ghats to perform prayers, bathe and wash their clothes. It is a great way to people-watch and as the sun rises there is a festive atmosphere, with music playing. Similarly, a sunset boat trip allows you to see spectacular Ganga Aarti (prayer ceremony) from the river. Along the ghats, you will see people participating in a whole range of activities not limited to bathing and praying. Expect to see people doing yoga, selling flowers, playing cricket, getting a massage and washing their buffalo.

At the cremation ghats, dead bodies are openly burned on funeral pyres. In Hinduism, it is believed if one’s ashes are laid in the Ganges at Varanasi, one’s soul will be transported to heaven, escaping the cycle of rebirth. This concept is known as moksha and the holier the place you are cremated, the higher chance you have of achieving moshka. It is possible to observe these rituals at the cremation ghats, although it is not for the faint of heart. While the ashes of those cremated are washed into the Ganges,  many bodies are discarded into the river partially cremated or not cremated at all. Some figures suggest around 100,000 bodies of various cremation levels are tossed into the Ganges each year. This is one of the reasons visiting Varanasi can be confronting, as these rituals of death are practiced so openly in a way other cultures may not be used to.

Other Sights of Varanasi

Ramnagar Fort is a crumbling 17th-century fort and palace on the eastern bank of the Ganges. While the fort itself is not in great condition, the attached Vyas Temple, dedicated to Ved Vyasa, is an incredible place to watch the sun set over the river. An 18th-century sandstone structure, the fort is the ancestral home of the Maharaja of Banaras. Today, the fort houses an eccentric museum filled with vintage cars, old weaponry, Mughal books and various religious manuscripts.

Vishwanath Templeis the most famous of the many temples in Varanasi. Sometimes called the Golden Temple, the current temple was built in 1776 and features 800 kg of gold plating on the tower and dome. It remains an important holy place for Hindus, dedicated to Shiva.

Varanasi is also known for its many festivals and events held throughout the year. The biggest festival is Dev Deepavali which happens fifteen days after Diwali on Kartik Purnima, usually some time in October or November. On this day it is believed the gods come to earth to bathe in the Ganges rivers and the ghats in Varanasi are dedicated with rows and rows of lamps, creating a magical effect.

The world’s oldest Ramlila performance, which tells the story of Lord Ram, is held at Ramnagar in the lead-up to Dussehra, the holiday marking the triumph of Rama, an avatar of Vishnu, over the 10-headed demon king Ravana.

Buddha Purnima (Buddha’s birthday) is also an important occasion in Varanasi. A huge fair is held at Sarnath to commemorate the event and sermons and readings of Buddhist scriptures are given. Fruits, flowers, candles and other gifts are placed in front of statues of Buddha. The whole area of Sarnath is decorated with lamps.
If you’re interested in visiting the incredible and unique city of Varanasi, please take a look at our cultural and history tour of India which spends two nights in Varanasi. On the tour you will get to enjoy an early morning boat cruise down the Ganges and a visit to Sarnath. Feel free to check out more of our India tours.