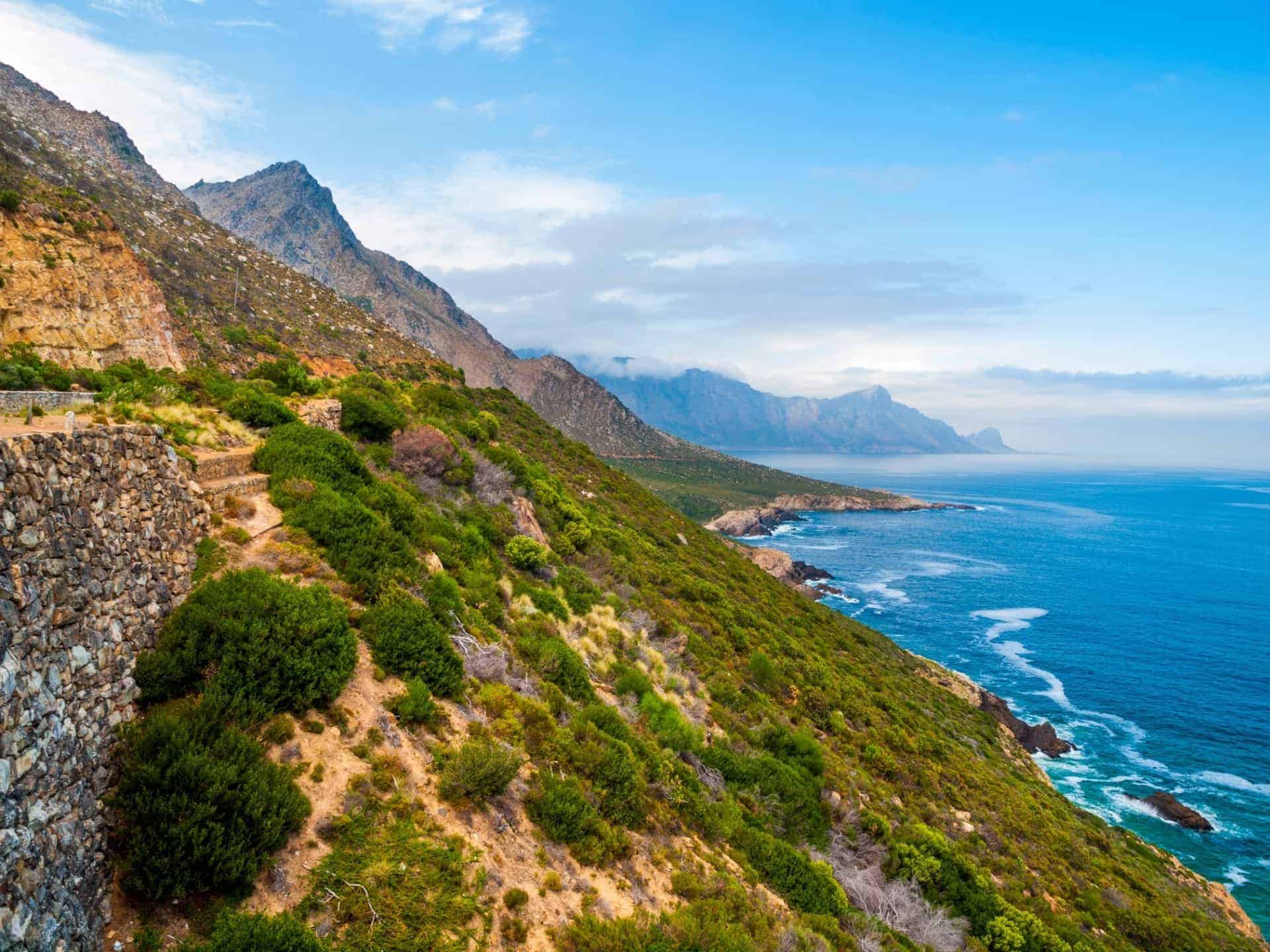 One of the must see experiences on a Southern Africa trip is to spend time exploring the Garden route, independently or on a escorted small group tour of the garden route along this rugged coastline.

The Garden Route stretches 300 kilometres from Heidelberg (3 hours east from Cape Town and the magnificanet table mountain )around the cape to Humansdorp on the east coast on the indian ocean side of South Africa. Joining a small group tour along the garden route often as part of a South Africa tour is a great experience. Though the official Garden Route starts in Mossel Bay in the west, and ends at Storms River in the east.

The principal town on this very scenic garden route is George, and the many popular destinations include Hermanus as a stop for coffee or lunch, the wilderness area and its chain of lakes, driving through the Karoo, Oudtshoorn , the remarkable Cango Caves complex, the pristine coastline , Knysna (with its calm 17 kilometre-long lagoon and surrounding forests) and the beaches of Plettenberg Bay . A garden route tour will offer travellers diverse and interesting tourist sights along the way, such as the Tsitsikamma National Park part of the Tsitsikamma forest region, depending on the time available.

There are two roads through this magnificent country for a group tour to explore the region on, though often time and weather will influence the trip choice. The main highway is the N2, while the alternative is Route 62. The tour leader on an escorted tour will probably choose Route 62 depending on time and weather. Route 62 meanders through the Klein Karoo or Little Karoo on the way between Cape Town and Oudtshoorn this is considered the scenic garden route. Travellers on a escorted tour pass through landscapes with panoramic views across the cape winelands district and fruit growing areas, see the towering cliffs along the rugged coastline, beautiful streams, indigenous forests and abundant indigenous flora and fauna.

Along the highway and before the divergence, travellers on a garden route tour can see rich farmlands and the ubiquitous and now disliked eucalypts brought from Australia to drain the swamps to defeat malaria. This was very successful, but the thirsty trees are still draining creeks and rivers. Along this route travellers can blue cranes, the national bird of South Africa , and the Forrest Buzzard, if lucky. The escorted tour of a Garden Route tour leaves the rich farmland and passes through the Karoo National Park which is a wildlife reserve of semi-desert area covering 750 square kilometres. South African wildlife are often seen on the tour. Bushbuck and Blue Duikers are common in the forested areas, and Common Eland can be seen on the slopes up from the road. Baboons and Vervet Monkeys are found throughout the region and travellers are advised to keep windows closed if Baboons are on the road. A special treat is to sight Klipspringer on the cliffs by the road. These small antelope leap up the cliffs on pointed hooves so that they look as though they are tip-toeing amongst the sharp rocks.

The Outeniqua Mountain range sits between the towns of Oudtshoorn to the north and George to the south. They run parallel to the coast from Mossel Bay in the west to the Keurbooms River valley in the east. The mountains made it difficult for European settlers to travel inland from the coast until the very steep Cradock Pass was opened in 1810.The Outeniqua means “those who bear honey” and is possibly the name of the Khoisan people who once lived in these mountains. Plenty of South African wildlife can be found in these mountains such as Antelopes including Klipspringers, leopards and many birds.

Oudtshoorn is the centre of the once-thriving and still very active ostrich-farming industry and the town still hosts regular feather auctions. The Ostrich farm started in South Africa in the early 1860’s and ostriches were farmed for their feathers only. In that time 1 kg of ostrich feathers was worth more than 1 kg of gold. The feathers decorated the hats and boas of wealthy British and European women. The farmers became known as ‘the ostrich barons’ because of the incredible wealth the Ostrich farm had the ability to generate. The demand for feathers declined dramatically when the popularity of the motor car ended the fashion for large hats. The farmers had been making so much money from the feathers that using the meat and leather was not even thought of. A modern ostrich farm utilises all parts of the ostrich– the meat, the beautiful soft leather and the eggs.

In the limestone rich Svartberg Mountains lie the spectacular underground wonder of the fabulous dripstone Cango Caves with their vast halls and towering formations. A small groups of between typically 6 to 12 people can explore these wonderful caves and learn about their formation. The caves are 29kms from Oudtshoorn .

In 2019, Knysna’s population was 85,708. The city lies 34°south of the equator and is 55kms from the town of George and 33kms west of Pletternberg Bay. In June 2017, the Knysna bushfire was declared the worst wildfire disaster in South African history. Seven people died and hundreds of homes and hectares of bushland close to the town were lost.

A fun thing to do in Knysna is the well-known Featherbed Boat Cruise and lunch on the Knysna lagoon. Featherbed is a privately-owned, registered game Reserve and a South African Heritage Site. It is a pristine piece of paradise situated on the Western Head of Knysna and is accessible only by ferry across the Knysna lagoon. As the paddle steamer putters around the 17km long Knysna lagoon, and travels out to the Knysna Heads , travellers can see stunning scenery , the local Milkwood trees and the beautiful green, but elusive Knysna Loerie.

Plettenberg Bay is a seaside town on the Garden Route in the Western Cape Province that your escorted small group tour of the garden route will pause at as part of your trip . There are two particularly beautiful beaches , Central Beach and Lookout Beach both have good surf breaks. The Bay is popular for whale watching and dolphin sighting. The Robberg Nature Reserve is a rocky peninsula with hiking trails and the Stone Age Nelson Bay Caves. This is a place of rugged coastline and spectacular scenery . There are great restaurants, wildlife parks and a range of game reserve in this area, which is a popular holiday destination for people from Pretoria and Johannesburg regions.

Birds of Eden is a free-flight sanctuary. The two hectare dome (the world’s largest) spans over a gorge of indigenous forest . It is home to over 3500 birds from over 220 species with the main focus being African birds. This is an award-winning bird sanctuary which provides a home where previously caged and/or injured birds can live of free-flight and free-roam in a habitat as large and as natural as possible. This is a beautiful and stimulating place to visit.

Monkeyland opened to the public in April 1998. This unique primate sanctuary is currently the top eco-tourism attraction on the Garden Route and for very sound and sunny reasons. Monkeyland has captured the hearts of visitors in its efforts to rehabilitate and free previously caged primates. The sanctuary is exceptional as it caters for several species of primates who are not caged. They are free to move about the forest and this they do most harmoniously. A tour of this sanctuary is a pleasant sojourn to walk through forest and hear and see primates free to wander.

After Pletternberg Bay and on the N2 travellers will cross Storms River via the Paul Sauer Bridge or Storms River Bridge. This is a deck arch bridge and is a most impressive sight as we continue on towards Port Elizabeth.

North of Plettenberg Bay and in the Eastern Cape , on the Indian Ocean is the city of Port Elizabeth . It lies on Algoa Bay on the Indian Ocean , and its deep water harbour is enclosed by a breakwater. Port Elizabeth was established in 1820 as a British settlement around Fort Frederick (1799; the oldest British building in southern Africa ) and was incorporated as a town in 1861.

Port Elizabeth is now a city and is also known for its oceanarium, many museums and cricket grounds. The Nelson Mandela Metropolitan University, founded in 2005 through the merger of the University of Port Elizabeth with PE Technikon and the Port Elizabeth campus of Vista University, is located there. This is a popular tourist destination for the fine beaches and excellent surfing, and the Addo Elephant National Park which was proclaimed in 1931 to protect the remaining 11 addo elephants. Excellent communications, cheap power, and water combine to create one of the country’s busiest manufacturing centres, which is largely dominated by the automotive industry . The city’s port at times handles imports for Zambia and Zimbabwe and exports manganese ore , wool, petroleum products, and fruit.

The trip around the cape as a escorted small group tour of the garden route or as an independent travellers along this route is definitely worth adding to a Cape Town tour or tour of South Africa or Africa. 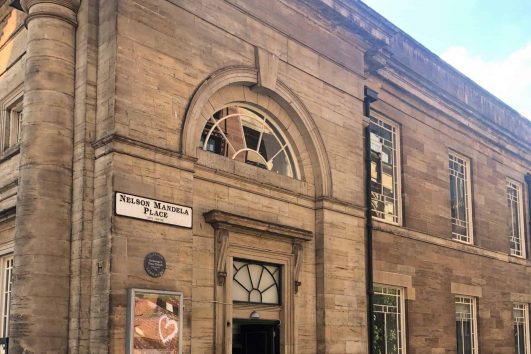 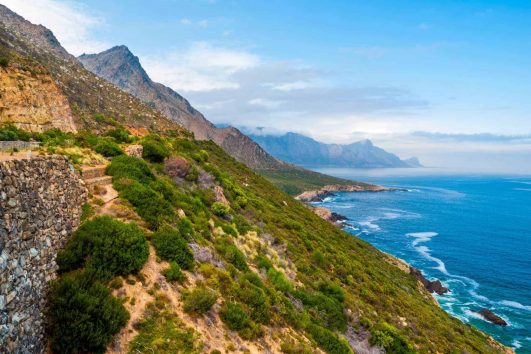