Geographically remote, off the eastern coast of  Africa and in the Indian Ocean, is Madagascar. This article briefly outlines the history of Madagascar and examines the unique biodiversity of the island.

This article is written as a backgrounder of our small group tour to Madagascar. Our tours in Madagascar allows the curious senior and mature-aged traveller to experience the full breadth of the island’s cultural and ecological diversity.

This tour is a great way to discover the country’s flora and fauna, its people, and its Portuguese and French colonial past. We begin in Madagascar’s capital Antananarivo (Tana, for short) before setting out to explore exceptional nature reserves with unique wildlife and extraordinary biodiversity. During our journey, we discover the local and colonial history, which includes the island’s role in the Spice Wars.

This tour is designed to suit the active senior traveller interested in the history and ecology of this island nation. 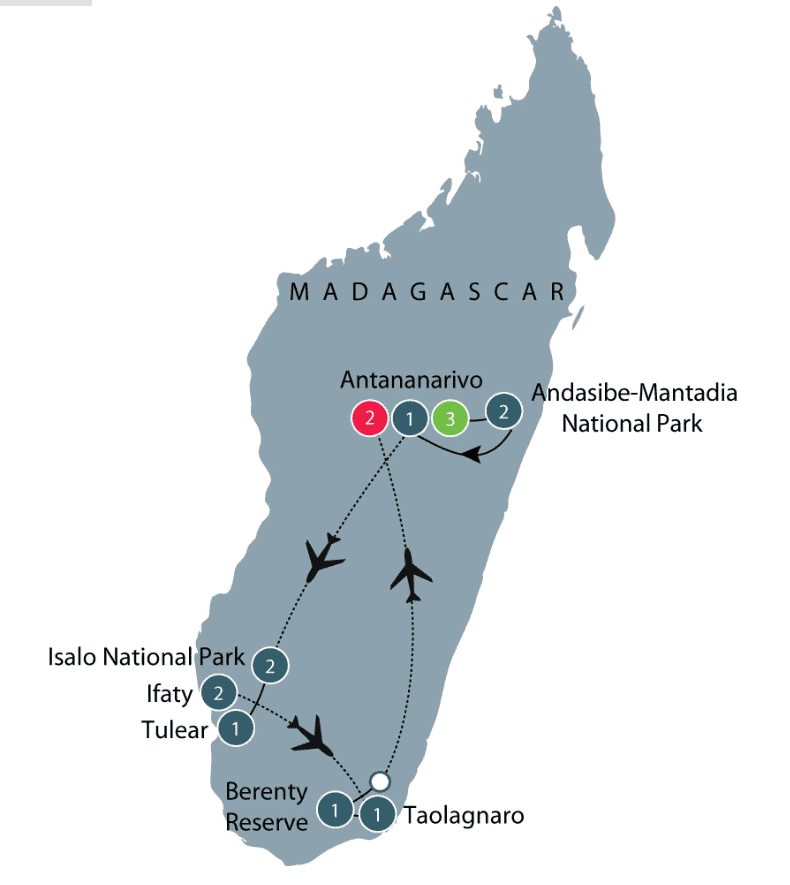 The first humans to visit Madagascar arrived on the island circa 2000 BC. By examining cut marks on bones and other evidence of tools, historians have concluded that these early visitors were likely foragers passing through on their travels.

The first people to settle on the island arrived around 490 BC. Historians believe that these first peoples came from either Indonesia or Africa. After arriving in outrigger boats, they quickly spread over the island, and traces of these first peoples are still visible today. Communities stuck mostly to the coastline, and the highland areas were not inhabited until around 1200 BC. 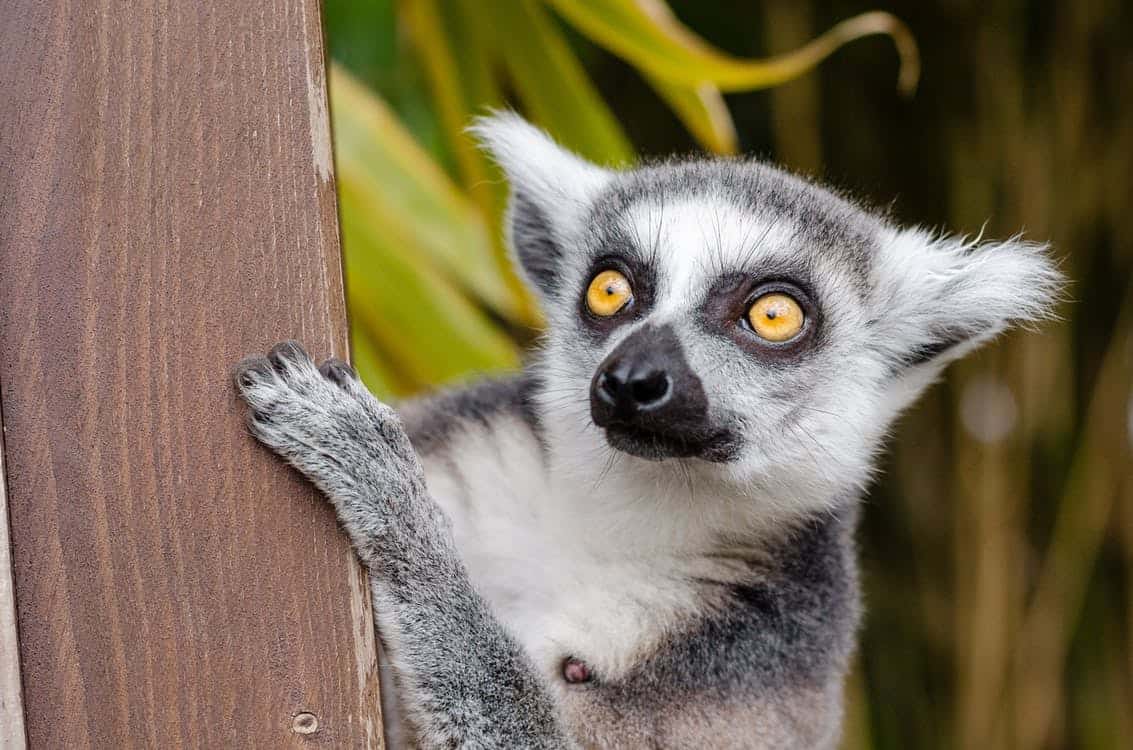 Europeans first sighted Madagascar in 1500. This early glimpse was a stroke of luck – the result of being pushed off course on a trip from Portugal to India. Diogo Dias was the ship’s captain, and did not land but recorded the sighting in the ship’s log. Later that century, many European nations tried to build trading colonies on the island. Portuguese, Dutch, French, and English traders all competed to colonise parts of the island for trade purposes. However, every one of these attempts failed. This failure was due to both the Europeans’ lack of preparedness for the harsh weather conditions, as well as the resistance led by Malagasy warriors.

Later attempts at colonisation were partly successful. In the early 17th century, Portuguese missionaries try to bring to the Malagasy the news of Christianity, and both Britain and France made renewed attempts to establish settlements. 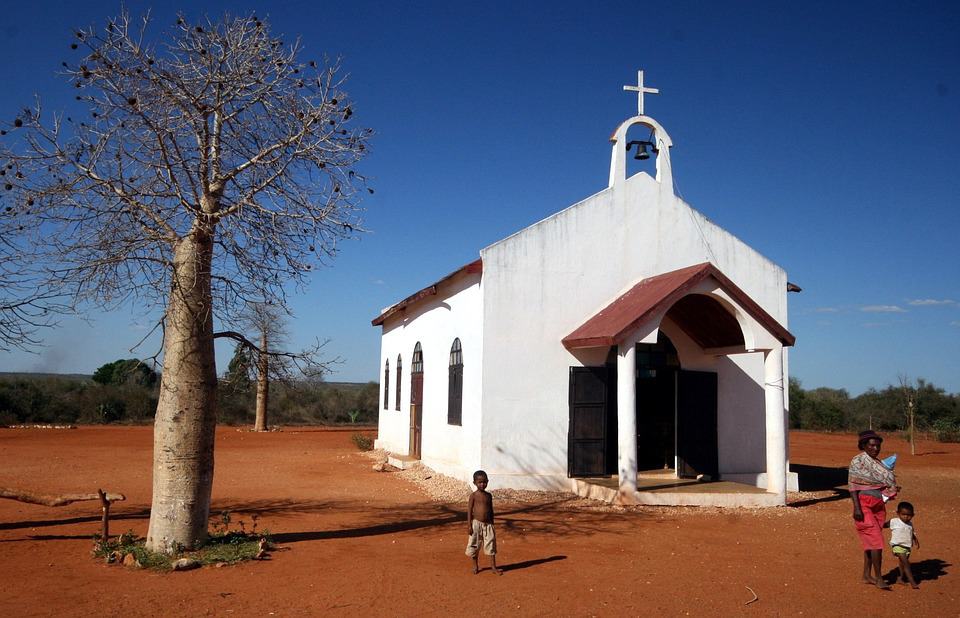 Pirates on the Island

Later on, between 1680 and 1725, Madagascar became a pirate stronghold. Many unfortunate sailors became shipwrecked and stranded on the island. Those who survived were taken in by local tribes, or else lived in small French or English colonies. Robert Drury was one survivor who lived in Madagascar for many years, and the journal he kept during his time there is a precious historical source for understanding southern Madagascar in the 18th century. Madagascar, or Robert Drury’s Journal During Fifteen Years’ Captivity on That Island is still a valuable account of the complexities of Madagascan life in the 1700s. The book bears several uncanny resemblances to Robinson Crusoe, despite its author having never read Defoe’s novel.

England’s attempts were mostly failures, but France was able to maintain a garrison at Fort-Dauphin for thirty years. A massacre by Malagasy warriors forced them off the Island in 1674, though later French kings continued to claim colonial rights over the island. At the same time, large and well-organised kingdoms were being established by Madagascar’s earlier inhabitants. There were many competing rulers, vying for territory and influence, with some eventually merging to form powerful dynasties. By 1650, virtually half of Madagascar was ruled by a Sakalava-tribe dynasty. This group held the north west territories, with the remainder split between smaller tribes.

The Sakalava dynasty’s territory waned in the 18th century, and was eventually second to one arising from the Merina family on Madagascar’s central plateau. The Merina kingdom was ruled by Andrianampoinimerina. On his deathbed in 1810, he gave his son Radama the task of conquering the entire island. The sea, he prophesied, would be the boundary of the Merina ricefield.

Radama I was only eighteen when he was bequeathed the kingdom, but was able to expand it enormously during his lifetime, gaining control over the majority of the nation. He eventually controlled more than two thirds of the island. Radama was able to do this through a shrewd deal with British colonists. As the first Malagasy sovereign to be recognized as King of Madagascar (1810-1828) by a European state, he was able to negotiate numerous important deals. This was particularly true of his dealings with Britain. In return for abolishing the export of slaves and maintaining a British agent in his court in Antananarivo, he won many benefits. Radama received arms and ammunition, an annual payment, as well as military training for his troops. British scholars also devised a script for the Malagasy language, allowing it to be transcribed for the first time. The British interest in the deal was the opportunity to convert the Malagasy to Christianity, and maintain stable ruling conditions on the island.

Radama and the British

Radama welcome London Missionary Society envoys, who both converted his citizens and set up teach tradecraft and literacy schools for the nobility and military members to attend. They also created a literate population, using the translated Bible. Radama died very young of alcoholism at just 35. Radama was succeeded by his highest-ranking wife, Ranavalona I.

In 1820, under the direction of David Jones, a Welsh missionary from the London Missionary Society, Radama I codified the new Malagasy Latin alphabet of 21 letters. This new system replaced the previous sorabe alphabet. By 1830, the Bible had been translated into this new Latin alphabet. It is the oldest complete translation of the bible into a sub-Saharan African language.

In the nineteenth century, the kingdom of Madagascar transformed from a local monarchy into a modern nation state.

The United States and the Kingdom of Madagascar concluded a commercial convention in 1867 after which Queen Rasoherina and Prime Minister Rainilaiarivoy exchanged gifts with president Andrew Johnson. In 1881, the two nations signed a treaty of peace, friendship, and commerce.

During the reign of Ranavalona I, early attempts at industrialisation took place from 1835 under the direction of the French Jean Laborde (a survivor of a shipwreck off the east coast), producing soap, porcelain, metal tools and firearms (rifles, cannons, etc.).

In 1864 Antananarivo opened the first hospital and a modern medical school. Two years later, he oversaw the printing of the nation’s first newspaper. In 1875, A scientific journal in English (Antananarivo Annual) was founded by locals. In 1894, on the eve of the establishment of colonial rule, the schools of the kingdom, mainly led by the Protestant missions, educated over 200,000 students.

After French colonisation, officially signed into law in 1885, the Malagasky came under French rule. Despite various rebellions and uprisings, the nation remained under French rule until 1960. On 26 June, 1960, Madagascar became an independent country and Philibert Tsiranana became its first president. The French granted independence as part of a broader decolonization movement. There have been three major phases of the republic since then, including Didier Ratsiraka’s dictatorship from 1975 to 1991. Madagascar is now led by President Hery Rajaonarimampianina and Prime Minister Olivier Solonandrasana.

Odyssey Travellers offers a seventeen-day tour to Madagascar. This tour explores the nation’s unique flora and fauna. Get the chance to see lemur, chameleons, humpback whales (which travel to the warm waters of Madagascar from June to September), and great baobab trees whilst exploring verdant tropical forests and the island’s turquoise blue waters.

This tour also examines the history of human settlement on Madagascar. The tour includes visits to the places that the Portuguese claimed as part of the Spice wars with the Spanish and the Arabs.

Odyssey links this tour with its tours to Southern Africa and Namibia, allowing travellers to link up travel experience. For more information on our Madagascar tour, please follow this link.

If you’re curious to learn more about this fantastic island, and what you can find there, here are some resources:

New York Times: Only in Madagascar