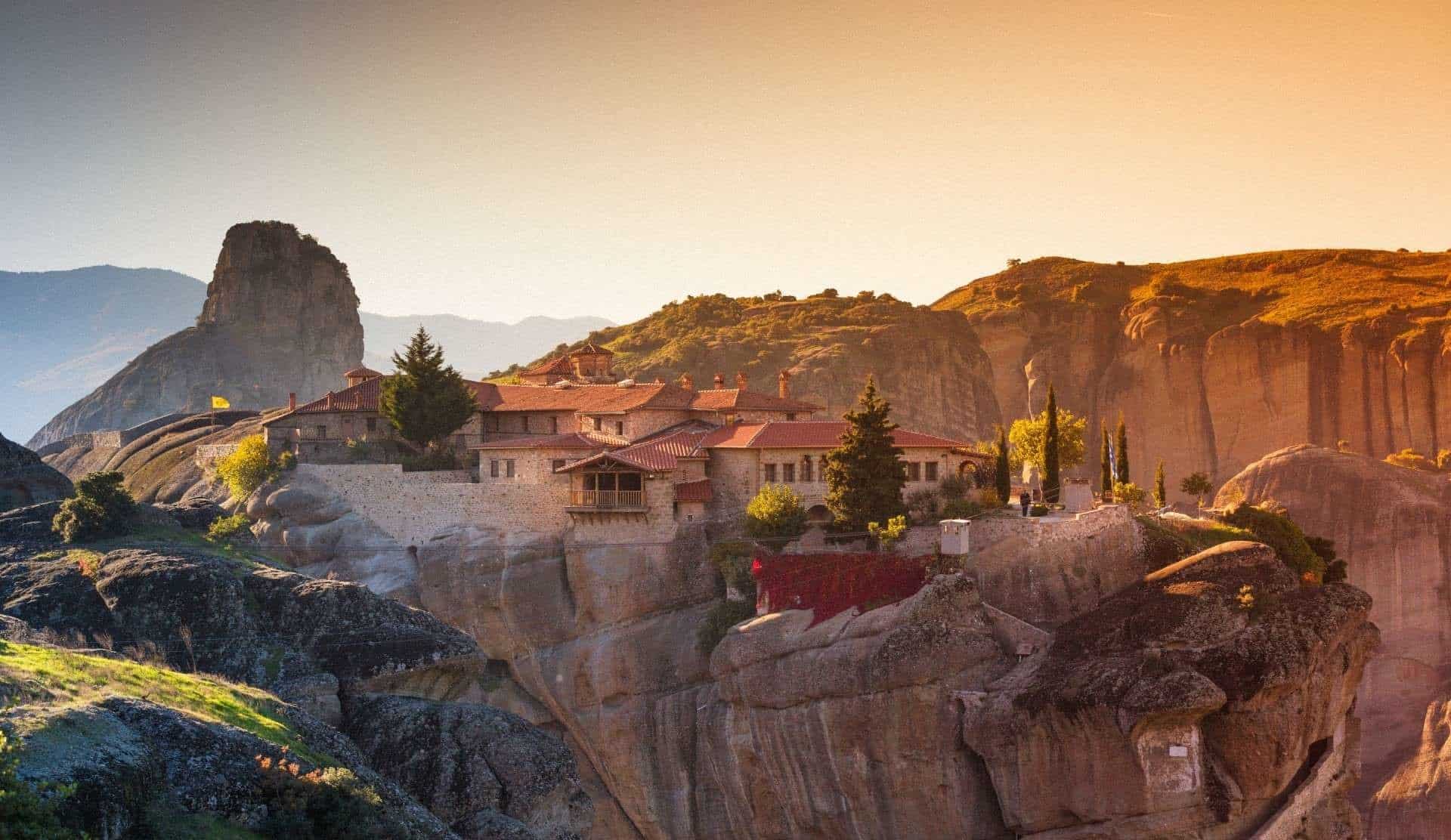 The 6 monasteries perched on top of rock pinnacles near Kalambaka in Central Greece is probably the most spectacular visitor site in Greece. Meteora means “suspended in the air” and the remaining six monasteries are built on the top of isolated hard-sedimentary strata which have resisted erosion over the centuries. It is the largest site of Eastern orthodox monasteries and second in importance after Mount Athos. The earliest religious communities in Ancient Greece are believed to have occupied nearby caves during the 10th century AD and monastic communities developed during the 14th century. At their peak during the 16th century it is believed that 24 of the pinnacles were occupied by monasteries or hermitages. Today only two of the monasteries continue to function as religious communities, while six are open to visitors as museums. Kalambaka is also famous for its magnificent old Byzantine church, plus a couple of enjoyable museums and hosts a bustling market every Friday. Visit Meteora and stay in the small town of Kalambaka for at least a couple of nights. Odyssey includes a Meteora day trip with a local tour guide on our tour Odyssey to Greece, also escorted by an Odyssey tour leader.

In 1988, the Meteora monasteries became an Unesco world heritage site and the Meteora-Antichassia area is part of the Natura 2000 network hosting some rare species of birds and flowers. 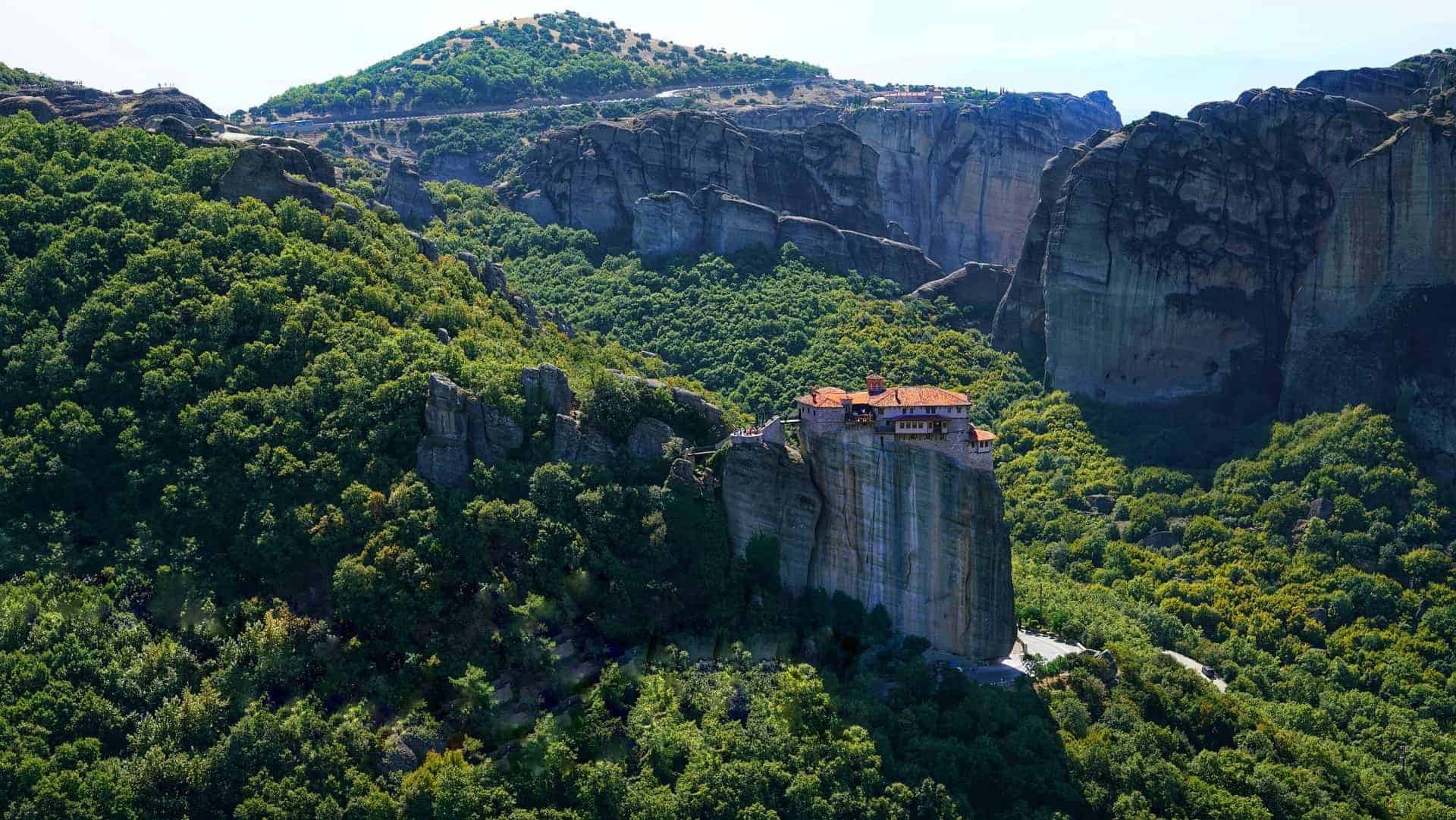 At their peak in the sixteenth century there were 24 monasteries at Meteora in Greece. They were created to serve monks and nuns following the teachings of the Eastern Orthodox Church. Today there are six still functioning, while the remainder are largely in ruin. Perched onto high cliffs, they are now accessible by staircases and pathways cut into the rock formations.

Access to the huge rocks were initially only available by removable ladders. Steps were cut into the huge rocks first in the 1920, making the complex accessible via a bridge from the nearby plateau. During World War II the site was bombed. Many art treasures were stolen.

Kalambaka, the town that guards the approach to the Meteora, was burned to the ground by the Nazis in WWII, and is now almost rebuilt entirely due to recent construction.

These unique and enormous rising Meteora rocks are composed of a mixture of sandstone and conglomerate. The conglomerate was formed of deposits of stone, sand, and mud from streams flowing into a delta at the edge of a lake, over millions of years. About 60 million years ago, a series of earth movements pushed the seabed upward. Water, wind and extremes of temperatures then formed huge rock pillars. It is unusual that this conglomerate formation and type of weathering are confined to a relatively localised area within the surrounding mountain formation. Meteora’s abrupt vertical weathering is rare. 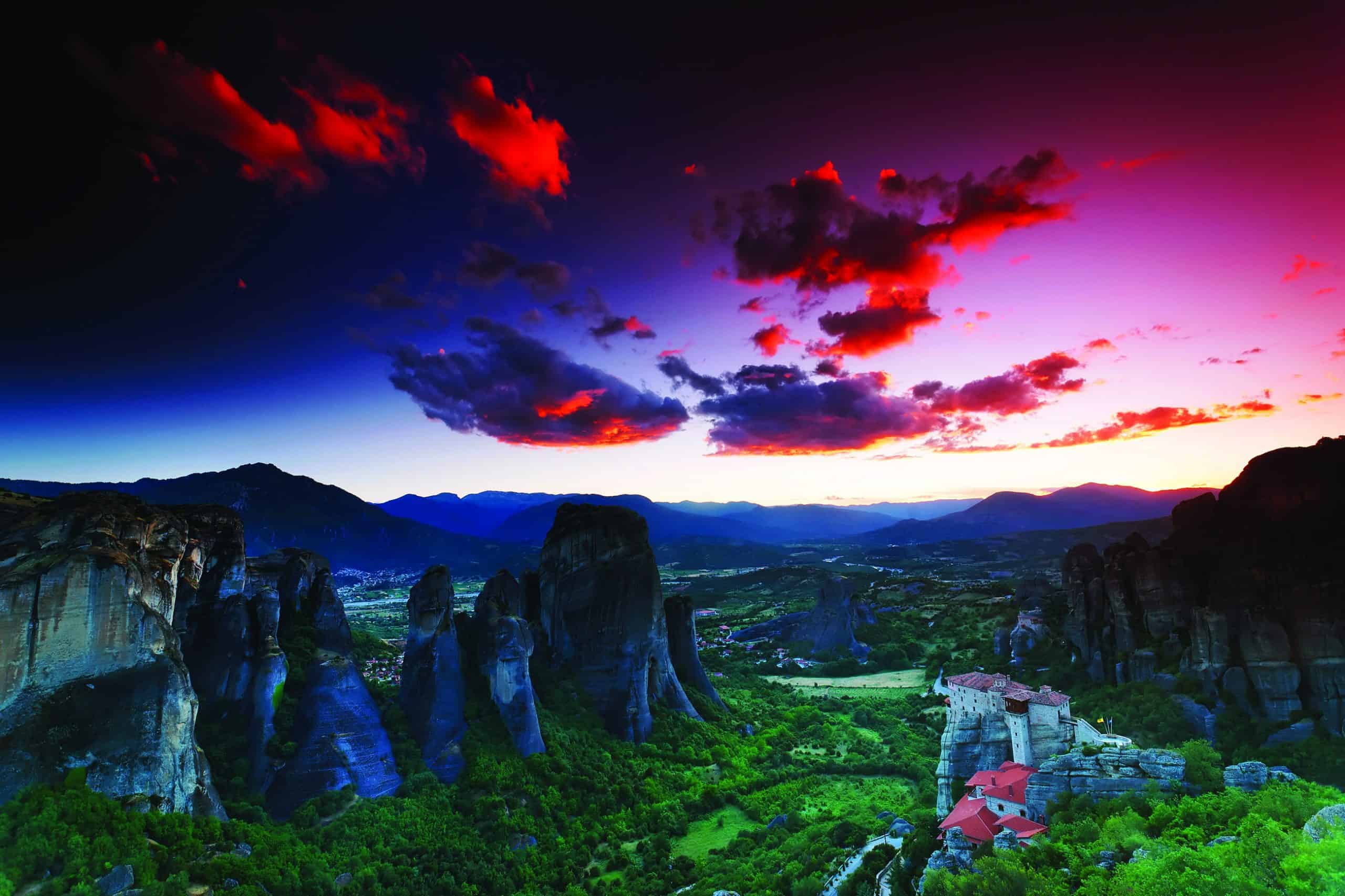 Meteora is also famous for its many caves, which were inhabited between 50,000 to 5,000 years ago. Many Palaeolithic and Neolithic artifacts of human occupation have been found within the caves. The oldest known example of a built structure can be found in the Theopetra Cave; a stone wall that blocked two-thirds of the entrance to cave was constructed 23,000 years ago, probably as a barrier against cold winds – the Earth was experiencing an ice age at the time.

The first people documented to inhabit Meteora after the Neolithic Era were an ascetic group of hermit monks who, in the ninth century AD, moved up to the ancient pinnacles, however, monasteries were not built until the fourteenth century, when the monks sought somewhere to hide in the face of an increasing number of Turkish attacks on Greece.

In 1344, Athanasios Koinovitis from Mount Athos brought a group of followers to Meteora. From 1356 to 1372, he founded the great Meteoron monastery on the Broad Rock, which was perfect for the monks; they were safe from political upheaval and had complete control of the entry to the monastery. The only means of reaching it was by climbing a long ladder, which was drawn up whenever the monks felt threatened.

Odyssey’s small group tour of Mateora offers visits to at least two Monasteries, most likely two of the following:

The Great Meteoron, also known as the Holy Monastery of the Metamorfossis (Transfiguration of Christ), is a male monastery and is the oldest and largest of all the monasteries of Meteora. Built by Saint Athanasios Meteorites from Mount Athos, mid-14th century, it is located on the largest rock of the complex.

The monastery Varlaam owes its name to the hermit-anchorite Varlaam, who first inhabited the rock in the 14th century. It is the second biggest monastery of Meteora. In the early 16th century two brothers from Ioannina, the priest-monks Theophanes and Nectarios, the so-called Apsarades decided to reactivate the abandoned monastery of Varlaam. They settled on the cliff spending many years building a new chapel dedicated to “All Saints” in 1541. The monastery of Varlaam has opened recently a brand new museum, where visitors can admire the excellence of religious painted icons – mostly contemporary to the Renaissance period – and precious holy vestments of the priests from the Byzantine period.

The Rousanou Monastery was built in 1545 by Maximos and Ioasaph of Ioannina, it is unclear who the actual Meteora monastery is named after, but it is dedicated to St. Barbara.

The monastery looks impressive as it looks like a single construction over the surface of the rock.

Like other monasteries at Meteora the Roussanou monastery was looted during the Second World War. The monastery is reached by a bridge that has some dramatic drops. Nowadays the Monastery is run by nuns.

During Odyssey’s small group tour Odyssey to Greece, you will stay in Kalambaka for two nights. From the vicinity of Kalambaka we will do a Meteora tour to visit at least two of the ancient Meteoran monasteries, one of the most memorable sights of mainland Greece. Meteora is the stop after the Greek island of Corfu and Nafplion, Kalamata, Olympia, before you continue on to Delphi, Mykonos and back to Athens for a visit to Acropolis and many more famous sites and museums.