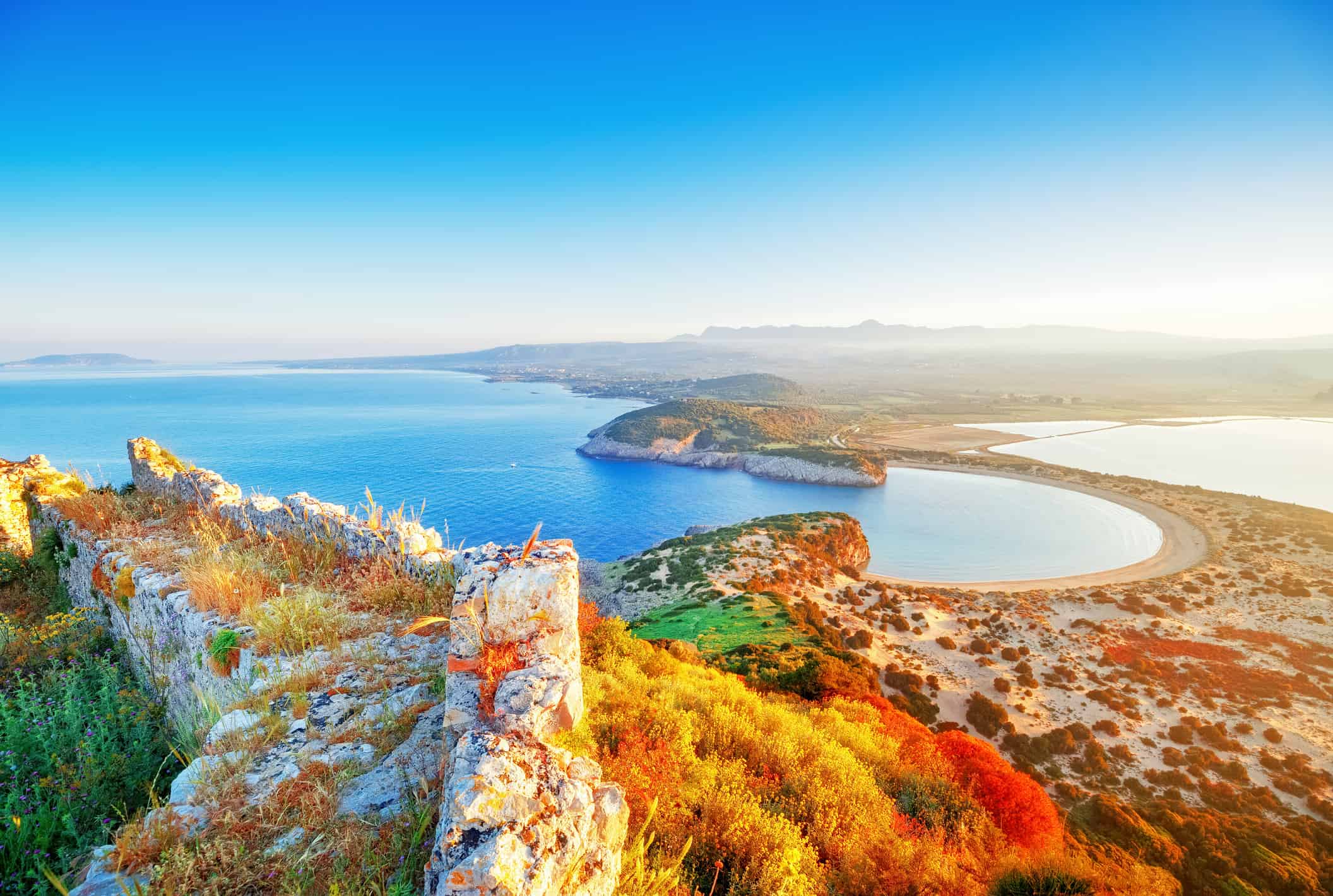 The Peloponnese is a beautiful peninsular by the seaside in southern Greece. It is connected to the central part of the country by the Isthmus of Corinth land bridge which separates the Gulf of Corinth from the Saronic Gulf. Various locations in the Peloponnese are perfect for a swim at the beach, a stroll by olive trees through the rugged mountains, and a visit to authentic villages and grand historical monuments. Indeed, the area has been of upmost cultural and political importance throughout history, home to a number of civilizations, empires, conflicts, and power struggles. This article traces this history from the Bronze Age, through classical antiquity, the Byzantine and Ottoman empires, and finally modern Greek independence.

The Mycenaean civilization (c. 1700-1100 BCE), Greece and Europe’s first civilization, dominated not only the Peloponnese but also most of mainland Greece and over the sea to several islands – while its  influence extended even further across the Aegean Sea. But it was in the Peloponnese area that the civilization’s major cities were centered including ancient Mycenae, Argos, Tiryns, Sparta, and probably Athens.

Common archaeological finds from these areas include richly decorated palace complexes, majestic citadels, tombs, and an array of luxurious and utilitarian goods including weapons, tools, jewelry, carved gems, glass ornaments and vases. Famous buildings include the Citadel of Tiryns and the Lion’s Gate entrance to Mycenae city. These archaeological remains, as well as the evidence of extensive trade and a system of writing, suggest a complex society of sophistication and prosperity.

Yet sometime in the 12th century BCE this would all come crashing down. Archaeological evidence suggests that after 1200 BCE there was a massive reduction of settlement sites – possibly due to natural disaster, internal and political upheaval, overpopulation, barbaric invasions from land and sea, or a combination of these factors.  Concurrent cultural declines across the sea in Egypt and the Near East brought about the collapse of the Bronze Age. The heights of Greek culture, beautiful cities, and recorded literacy disappeared; for the next three years hundred years the Dark Age descended over Greece.

Eventually out of the darkness a number of the most powerful city-states of ancient Greece would emerge. Small farming villages evolved into urban centres known as a polis, an independent city-state with its own political, religious, and social institutions. Greece had entered the classical period of Greek antiquity – the beginning date denoted as 776 BCE, the year of the first Olympic games at ancient Olympia. This was a high period of art, philosophy, educational ideals, and architectural achievements such as the famous Parthenon, Temple of Poseidon, and theater of Epidauarus.

The Peloponnese would lead the way as the centre of Greek affairs and power struggles during this time. Some of the deadliest wars for power and influence occurred here; the now famous turquoise waters by the coast were near constantly a deep blood red.

The biggest impact was the Peloponnesian war (431-404 BCE) fought between the two strongest city-states in Greece – Athens and Sparta – and their allies. Years of bloodshed ended with the Spartans proving victorious and marking the fall of the Athens city dominance. But the years of war had wrecked so much havoc on Greece – cities and major crops destroyed and extensive economic and military losses suffered by all the city-states – that less than a century later in 338 BCE the city-states of the Peloponnese were easily conquered by the Macedonian kingdom. An unstable period followed with the Peloponnese area governed by a succession of Hellenistic kings.

In 146 BCE the expanding Roman republic conquered the area and it became, along with Northern Greece, the Roman province of Acaea. In the Roman times, the peninsula remained mostly removed from the wider Roman world. That is until Julius Caesar founded his colony at Corinth in 44 BCE and the city became an important administrative and trade centre. Corinth’s importance then continued to grow following St Paul’s visits between 51-52 CE becoming the centre of early Christianity in Greece.

After the partition of the Empire in 395, the Peloponnese became a part of the East Roman or Byzantine Empire. The Byzantine rule was not consistent though, losing the Peloponnese for extended periods of times to various Slavic and Avar invasions in the 7th and 8th centuries and later as a result of the Frankish crusades on Constantinople in 1204. However, the region would again revert to the last Byzantine emperors under the Palaiologos dynasty to become a centre of culture and power between the mid-14th and mid-15th centuries.

During this time the Peloponnese was known as the Despotate of the Morea with the fortified town of Mystras serving as the capital. A remarkable cultural renaissance occurred influenced by the philosophy and writings of neo-platonic humanism and attracting famous artists and architects of the highest quality.

The Ottoman Turks and Modern Independence

In 1461 Mystras was surrendered to the Turks and the Peloponnese region was made into a province of the Ottoman Empire. The Ottoman system discriminated against the non-Muslim population by imposing special taxes like the head tax and tax for freedom forcing many Greek families to other countries.Yet the Greek Orthodox Church was allowed to function and so the traditional Greek culture and languages were kept alive within Greece.

The culture was also maintained abroad, where revolutionaries influenced by independent movements emerging throughout Europe at the time laid the groundwork for an uprising. In 1821, a revolt in the Peloponnese became the spark to the Greek Revolution following a long tradition of resistance against the Ottomans in the region. By 1827, with the help of Great Britain, France, and Russia, independence was achieved. The Peloponnese became part of the modern state of Greece, and the coastal city of Nafplio became the first national capital. The era of Modern Greece had begun. 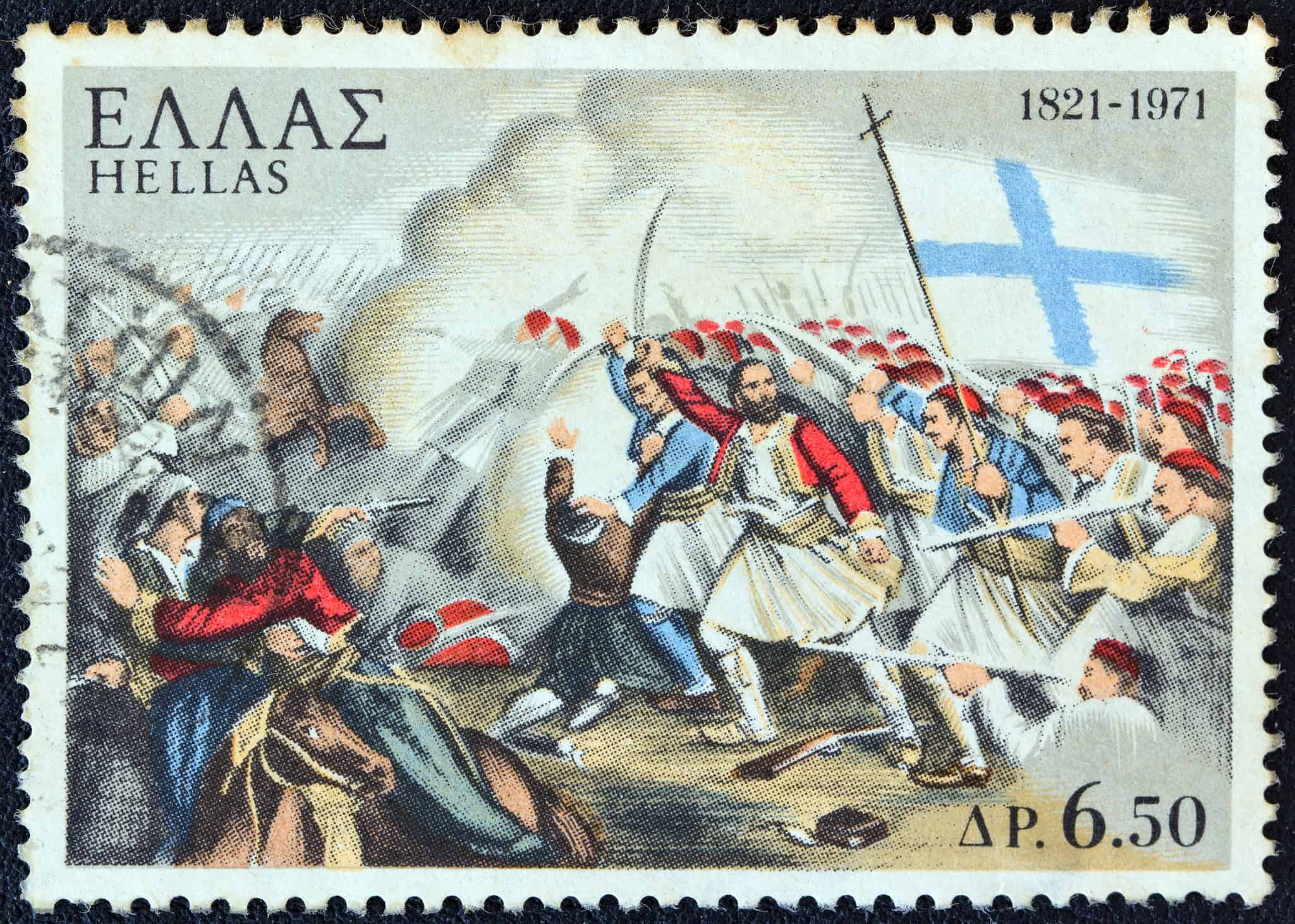 GREECE – CIRCA 1971: A stamp printed in Greece from the “150th Anniversary of War of Independence (4th issue). The War on Land” shows the Battle of Maniaki, Messenia, Peloponnese