Corfu: A History of Conquest 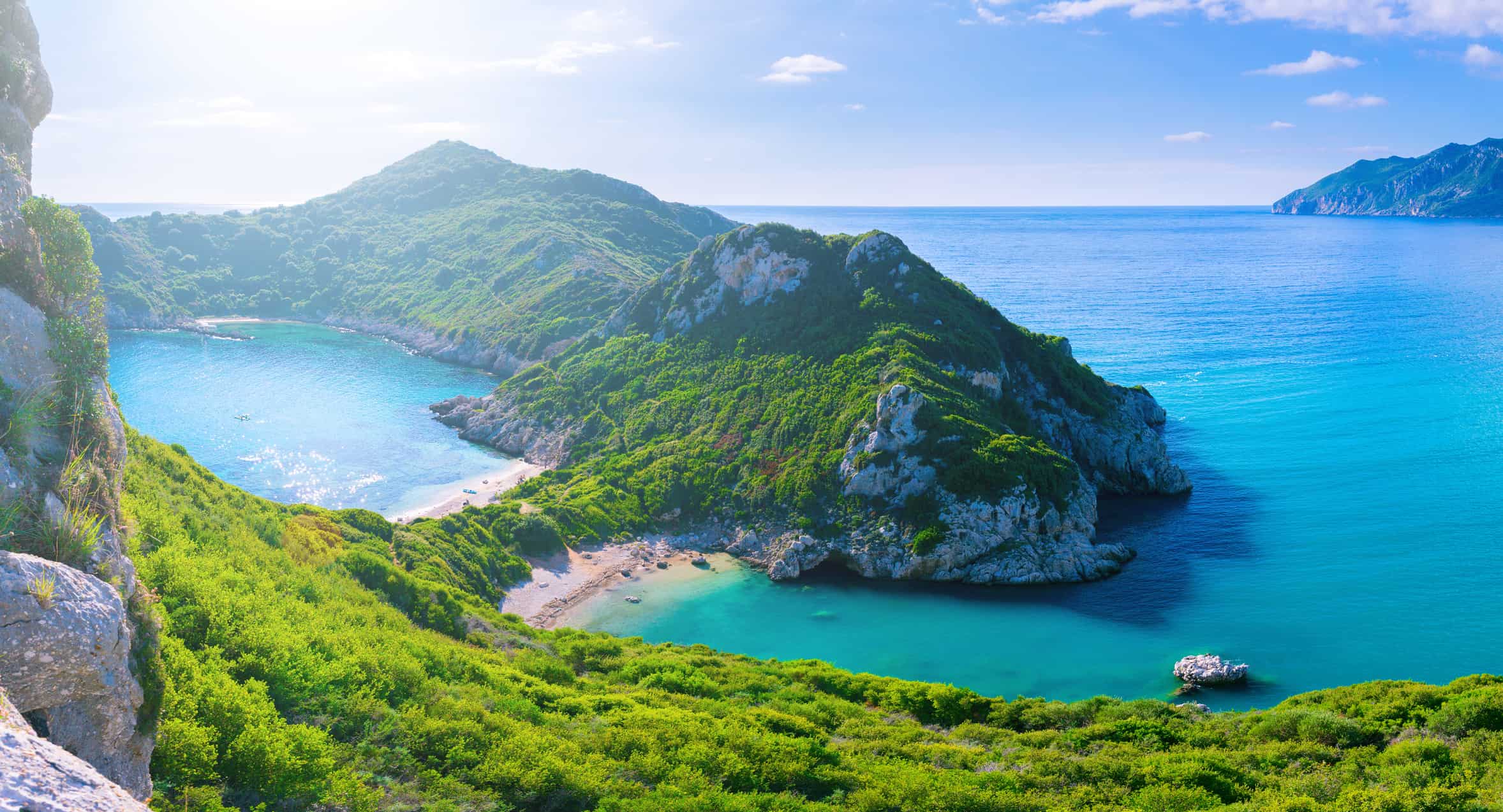 Corfu is a Greek island in the Ionian Sea with an amazing scenery of olive groves, rocky cliffs, coastal beaches, and historical architecture.  It has a rich history of conquests, host to various major powers over the centuries. The Romans, Venetians, French, and British have all dominated leaving their own mark on the development and culture of the island. As such, Corfu differs to much of the rest of Greece, with notable limited archaeological sites but an abundant mixture of forts, medieval castles, palaces, Greek orthodox churches, and monuments – all representative of its glorious past.

Odyssey Traveller conducts a private tour of Corfu as part of our Odyssey to Greece guided tour. We take a guided walking tour through the city to admire its finest historic buildings, explore some of Corfu Island‘s villages such as the scenic Palaiokastritsa traditional village with its 17th century monastery, and stop off at Achilleion Palace. This article explores this ionian island‘s history to assist your Corfu tour.

The first Greeks – a settlement of Eritreans from Euboea – arrived in Corfu around 750 BCE but were soon displaced by a Corinthian colony in 734. The colony was an important trade centre for towns of the Adriatic Sea as well as a naval base for further colonization ventures westwards. However, these people were proudly independent and quickly became insubordinate and hostile to the rulers of Corinth.  Around 665 Corfu rebelled and the first naval battle in Greek history took place just off the Corfu coast. Corfu was defeated and Corinthian tyrant Periander punished the city by heavily reducing it back to a colony.

Corfu eventually regaining its independence but remained in conflict with Corinth for centuries more. In 435 BCE Athens accepted a request from Corfu for assistance in a quarrel with Corinth, a decision which became a major catalyst for the Peloponnesian War (431-404). The alliance with Athens lasted for a century until Corfu was conquered by Macedonian King Phillip II in 338.

After 300 BCE the island was conquered by various other powers including the Spartans and Illyrians before voluntarily becoming part of the Roman Empire for protection in 229. The Romans allowed Corfu to keep its independence as a free state and used it as a naval base to conduct campaigns into the Eastern Mediterranean. They stayed for over 500 years, during which they built numerous roads, villas, and public buildings including bathhouses.

The Byzantine Empire took over following the Roman empire’s division into east and west in 339 CE and stayed into the 13th century. During this period the island suffered frequent barbarian raids by Vandals and Ostrogoths as well as pirate invasions. This prompted the gradual abandonment of the ancient capital at the site now known as Paleopolis and the fortification of the town with towers including the Old Fortress, the fortress at Kassiopi, the fortress in Gardiki, and the Angelokasstro fortress.

During Medieval time, due to the island’s favourable strategic position between mainland Greece and Italy and its commercial value, Corfu changed hands back and forth between various powers including the Normans, Kings of Sicily and Naples, and the Venetians. From 1386 Venice gained a dominant position fully controlling the island up until the 18th century.

Over these four centuries of domination, the Venetians influenced their architecture, art, music, linguistics developing Corfu into a cultural centre. This remains most evident in the many buildings, monuments, and other constructions erected in the Venetian classical-style. Examples include the famous Church of Agios Spyridion built in the late 1580s and the elegant buildings that line the pedestrian alleys in the Corfu Old Town.

During this time, over 3 million olive trees were planted in the fertile soil of the lush landscape. Some of these remain among the now 5 million that cover the island today producing some of the best and well-known extra virgin olive oil in Greece.

Napoleon Bonaparte conquered the Venetian Republic in 1797 and established hegemony over all the Ionian islands including Corfu. The French ruled until 1814 – separated by a seven-year period of Ionian State independence – introducing many agricultural and social improvements. Schools were built, printing presses imported, and new crops like potatoes and tomatoes introduced. The Liston – the grand pedestrian street in the Old Town – was built and the French had great plans for further development of the city.

The French rule was cut short, however, after Napoleon’s defeat by the British in 1815. Corfu became a protectorate of the British, capital of the State of Joined Ionian Islands, and entered a period of flourishing economic and infrastructural development. The road network was expanded, water and sewage system improved, first Greek University founded, and magnificent buildings erected including the Palace of St Michael and the Mon Repos Palace, followed by the Royal Gardens.

The British donated Curfu along with the other Ionian islands to Greece in 1864.  A number of fine buildings were then erected, including the Achilleion Palace. However, Greece could only afford one cultural and economic power center and so Corfu ceded its role to Athens as the capital, becoming itself a Greek provincial town.

During the two World Wars, Corfu sustained heavy damages with numerous historical monuments and cultural centres destroyed. Following the Second World War, poverty and crisis ensued in Corfu, along with the rest of Greece, and a large number emigrated.

Yet, from the 1960s the town rebuilt and its social and economic life was redeveloped largely due to a tourism influx. Today tourists continue to visit for a Corfu holiday enticed by its wondrous seaside beauty, glorious history, and the golden sand of its beaches. Particularly stunning corfu beaches include agios stefanos, agios ioannis peristeron, and agios georgios.

Odyssey Traveller takes a trip to Corfu as part of our Odyssey to Greece tour. On this fully escorted guided tour, we visit various destinations in Greece with our Program Leader and tour guide and wonder at what remains of its ancient civilisation whilst exploring its ancient ruins, monuments, and natural beauty. On our excursions, we will also sample the best of Greek cuisine.

During the 22 days of our educational sightseeing tour, we stop in 9 different locations commencing in Athens, staying between 1 to 4 nights in each. With several of these locations going well beyond the usual tourist route, we will have the chance to explore areas where few other tourists venture on their Greek vacation. This is particularly true of the Kalamata region.

This journey also takes travellers into the mountainous interior and the rugged coastline of the Peloponnese. Here, we see the diversity of the Greek isles. We experience the fertile Ionian island of Corfu, with its rugged mountains. Afterwards, we take in the rocky sun-drenched island of Mykonos. Finally, the group visits the Island of Delos in the Aegean. In addition, we also visit the ancient cities of Corinth, Delphi, and Olympia. Each of these is a UNESCO World Heritage Site, protected for their cultural value. There will also be ample time in Athens to discover the ancient Acropolis and Acropolis museum, as well as the Parthenon.