Registan Square in Samarkand was the heart of the Timurid dynasty built by the Turkic-Mongolian leader, Timur (Tamerlane). Registan means “sandy place” in Persian, and located on the Silk Road network. There is plenty to see and do on a city tour as you follow in the footsteps of the conquerors and merchants of Central Asia.

In 1220 Samarkand was almost completely destroyed by the first Mongol ruler Genghis Khan, but was to flourish again when Timur made it the capital of his Timurid empire in 1369. Timur as a patron of the arts and architecture initiated much of what we see today in Registan Square. It forms part of the ancient heritage site of Samarkand, a group of monuments and buildings inscribed on the UNESCO World Heritage Site list since 2001.

This should be included on any itinerary of the great Silk Road and Central Asia. A tour of Registan Square will show you the tiled medieval commercial centre and public square built by the artisans and craftsmen that Timur brought home with him (or possibly kidnapped) during his 14th-century conquests. Wander through the city that grew prosperous during the days of the Silk Road; Registan once had markets and cavaranserai (roadside inns) to cater to merchants and travellers seeking an oasis in the desert.

Registan has three architectural wonders, stunning madrasahs (Islamic religious schools) decorated with intricate mosaics—Ulugh Beg, Sher Dor, and Tillya Kari. The oldest of which was built by Timur’s grandson Ulugh Beg in the 15th century. Ulugh Beg’s madrasa, each corner flanked by an imposing minaret,  once housed some 200 students studying science, mathematics, astronomy, law, languages, and the Qur’an, and it was here that Ulug bek imparted his mathematical genius and other skills to students. 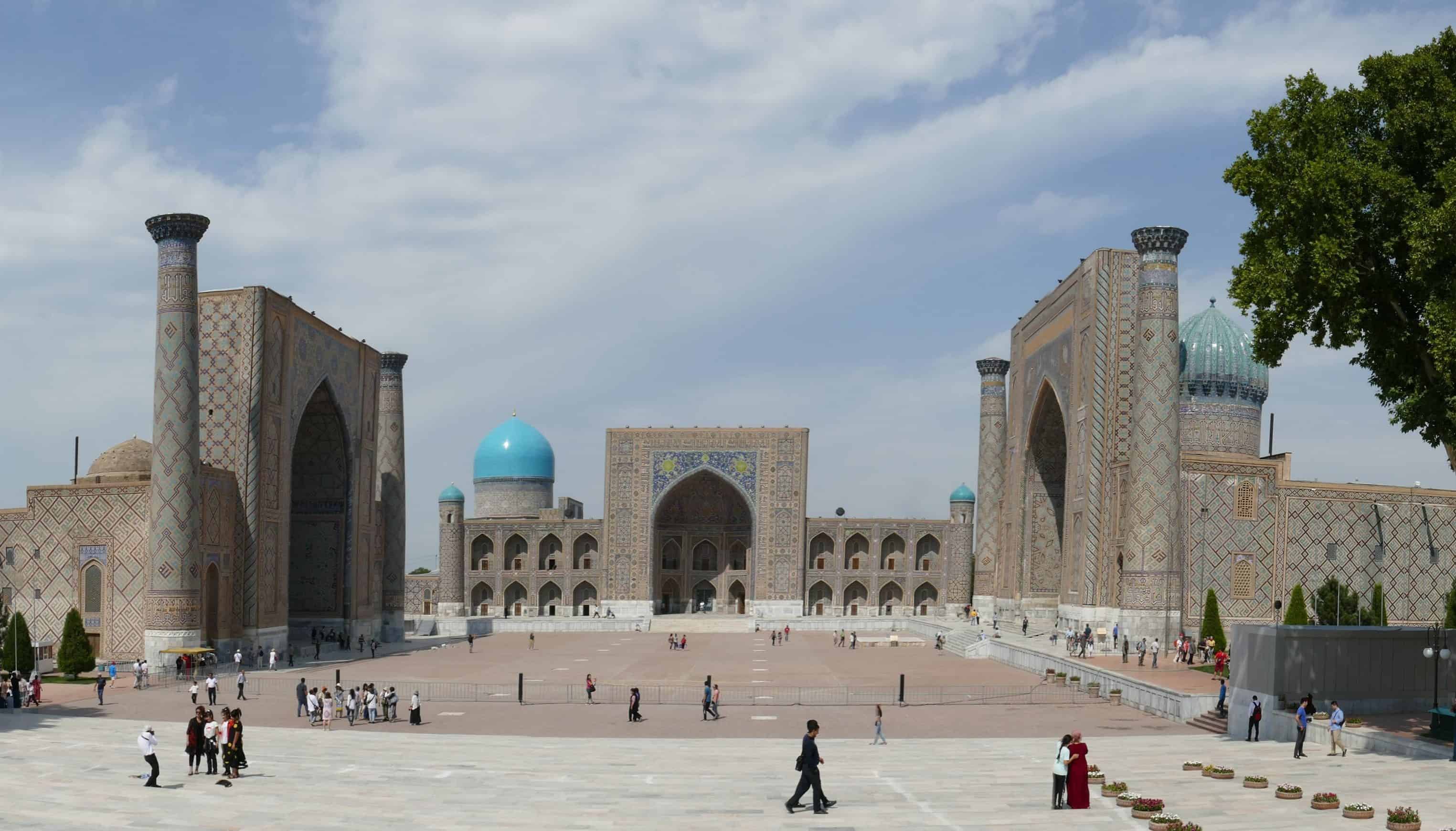 Uzbekistan has a comfortable, high-speed train network that can take you from Tashkent to Samarkand in just two hours, travelling through the stunning landscapes and mountain ranges of this country in Central Asia.

Registan Square is a beautiful place to visit on a walking tour, giving you time to take in the impressive architectural monuments as your local guide tells you about the history of the ancient Silk Road.

Uzbekistan has a variety of tourist accommodations, from a traditional yurt in nomadic settlements to rooms in a five-star hotel in the capital city of  Tashkent. A group tour to Uzbekistan is an incredible experience, combining the modern with the historical in Central Asia.

The Silk Road is an ancient trade route linking China and Imperial Rome through Central Asia. Few areas in the world remain as unexplored or offer such richness in terms of ancient and modern history, culture, and scenic diversity as Central Asia. Our itinerary explores the Silk Road through remote deserts and mountainous environments as we visit key sites between Xi’an and Bukhara.