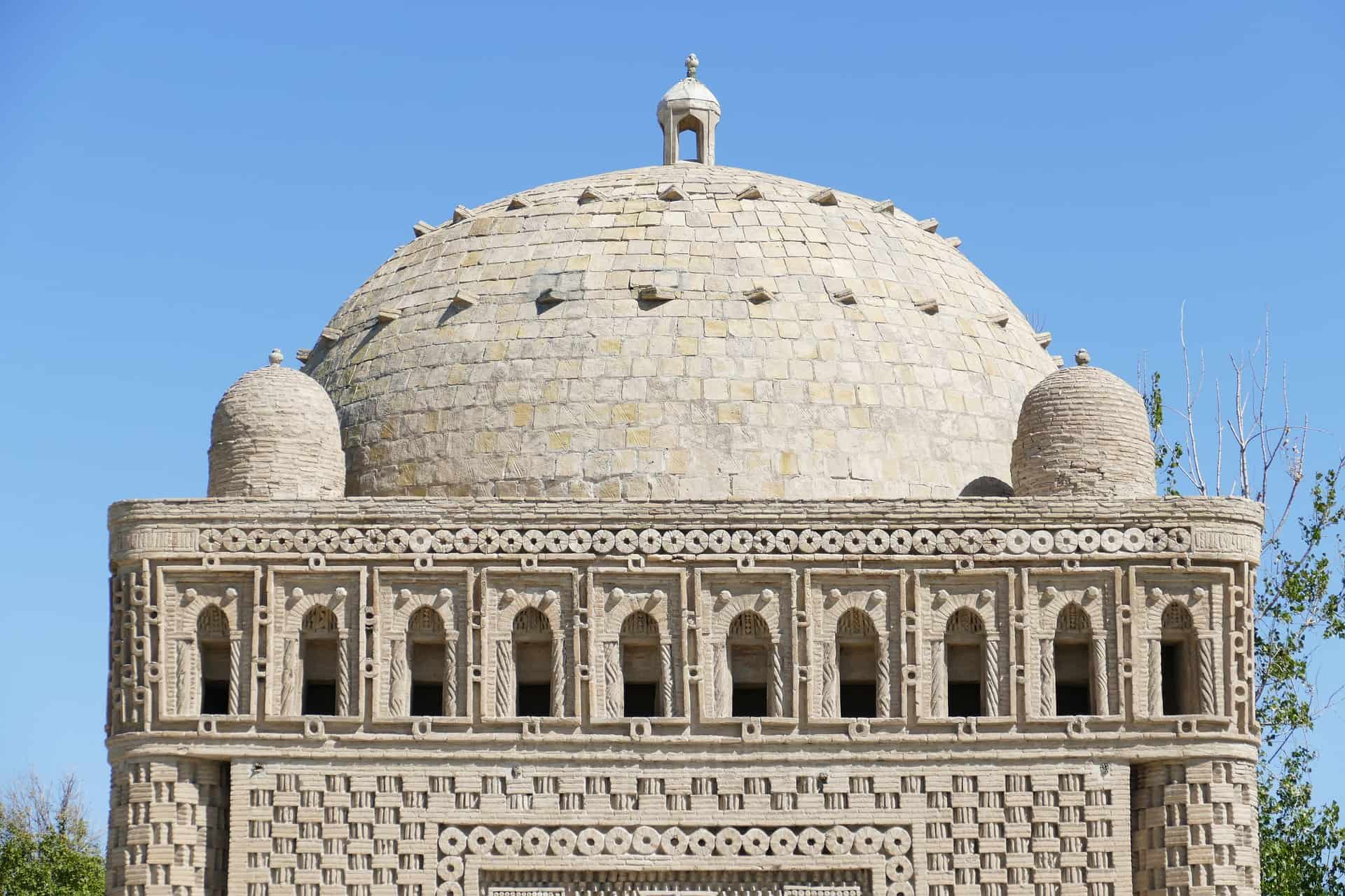 The Samanid Mausoleum, dating from the 10th century, is the oldest Muslim monument in the city of Bukhara, Uzbekistan. This final resting place was built for Ismail Samani (or Isma’il ibn Ahmad) the founder of the Samanid dynasty, a Persian dynasty that broke away from the Abbasid Caliph in Baghdad and ruled from 819 to 999, covering present-day Afghanistan, large parts of Iran, Tajikistan, Turkmenistan, Uzbekistan, Kyrgyzstan, and parts of Kazakhstan and Pakistan. The mausoleum also contains the remains of other members of the Samanid dynasty. It is part of the UNESCO World Heritage Site, Historic Centre of Bukhara.

The Samanid Mausoleum stands as an extraordinary masterpiece of the architecture of Central Asia. Calum Macleod and Bradley Mayhew in Uzbekistan: The Golden Road to Samarkand (Odyssey Books & Maps, 8th edition, 2017) calls it “an architectural bolt from the blue” (p. 205) and a highlight of any city tour in Bukhara. A tour of the Samanid Mausoleum may be done alongside a tour of Registan Square and Chorsu Bazaar in Tashkent.

The dome-topped mausoleum, shaped like a cube and lifted by four pointed arches, is reminiscent of the ancient Persian building design called chahar taq (“four arches”). The chahar taq is associated with Zoroastrian fire temples, where a burning fire needed to be seen from all sides. As we’ve written before, the chahar bagh has its roots in the 6th Century palace gardens of the Achaemenid Empire (also called the First Persian Empire) under Cyrus the Great.

Under the Achaemenid dynasty, Zoroastrianism was the religion of the empire, and the chahar taq  symbolised the Zoroastrian division of the universe into four elements: earth, water, wind, and fire. This design also influenced Islamic mosque architecture in Central Asia. The brick monument also incorporates elements from early Sogdian architecture. The Sogdians belonged to an ancient Persian civilisation that built the Silk Road cities of Samarkand and Bukhara. Its cube-like shape may also remind one of the Kaaba in Mecca.

The mausoleum’s four identical facades are covered in intricate decoration. This, and the fact that the mausoleum has stood for more than a thousand years, are a testament to the brickwork skills of its builders.