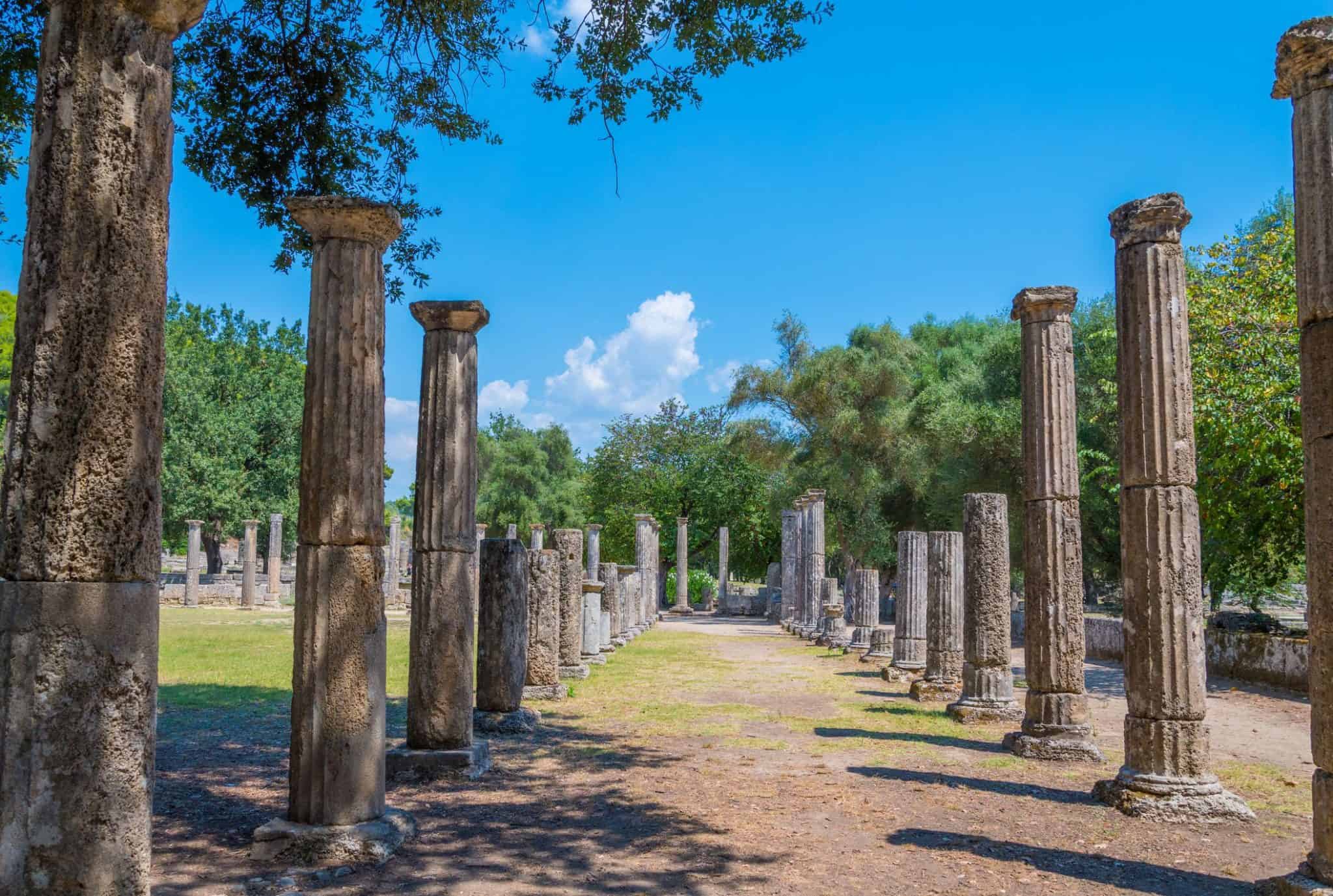 Olympia is among the most important places in Greece and a Unesco world heritage site.

The archaeological site and of Olympia, located on the western side of Peloponnese, is the site of the first ancient Olympic Games, originally between competing Greek city states. The first Olympiad is thought to have taken place in 776 BC. The classical period, between the 5th and 4th centuries BC, was the golden age of the site at Olympia. A wide range of new religious and secular buildings and structures were constructed. During the Roman period, the games were opened up to all citizens of the Roman empire. But the 3rd century saw a major earthquake that damaged the site. Rival tribes invaded and robbed some of the monuments, but still the Games continued until Christian emperor Theodosius implemented a ban in 393 AD. Theodosius II furthered the decline, enforcing a ban on pagan festivals. Key buildings were destroyed or inhabited by Christian communities. It is believed a version of the Games continued in secret until the mid-6th century, when two earthquakes and the Plague of Justinian devastated the region. Repeated floods ensured that the settlement was finally abandoned altogether in the early 7th Century.

The Olympic Games in ancient Greece wasn’t exactly a level playing field for women. It’s true that women of all ages were allowed to enjoy the festivities and exhilarating athletic events in cities throughout the Peloponnese states, including Delos and Athens. But the Games in Olympia in the land of Elis-the city where the Olympics originated-retained its traditional, sacred ban of women. Elis decreed that if a married woman (unmarried women could watch) was caught present at the Olympic Games she would be cast down from Mount Typaeum and into the river flowing below, according to Greek geographer and travel writer Pausanias.

As time went on, the site became buried in alluvial deposits that were up to 8 metres deep. Initially, these deposits were attributed to river flooding, but modern research indicates another hypothesis. The presence of mollusc and gastropod shells, and foraminifera (shell-covered amoeboid organisms) suggests the site was buried with ocean water resulting from repeated tsunamis.

The exact site was re-discovered in 1766 by the English antiquarian Richard Chandler. The first excavation of the sanctuary at Olympia was not carried out until 1829, by the French “Expedition Scientifique de Moree”. Its extensive ruins include athletic training areas, a stadium and temples dedicated to the gods Hera and Zeus. The Archaeological Museum of Olympia exhibits finds from the site, including a statue of Hermes attributed to the sculptor Praxiteles.

Olympia lies in the wide valley of the rather small Alfeiós River, around 18 km away from the Ionian Sea. The archaeological site held over 70 significant buildings, and ruins of many of these have survived, although the main Temple of Zeus survives only as stones on the ground. In contrast to Delphi, where a similar large collection of monuments were tightly packed within the temenos boundary, Olympia sprawled beyond the boundary wall, especially in the areas devoted to the games. The site is a major tourist attraction, and has two museums, one devoted to the ancient and modern games.

The Olympic flame of the modern-day Olympic Games is lit by reflection of sunlight in a parabolic mirror in front of the Temple of Hera and then transported by a torch to the place where the Games are held. When the modern Olympic Games came to Athens in 2004, the men’s and women’s shot put competition was held at the restored Olympia stadium.

During Odyssey’s small group tour of Greece, you will stay in an Olympia hotel for two nights. From the vicinity of Olympia you will visit the Olympic Stadium and other ruins from the ancient world, as well as a visit to the Olympia Archaeological Museum and the Courbertin Monument. Your entrance fee is included in Odyssey’s tour price and you will be escorted by your Odyssey tour leader, as well as local guides, with in depth knowledge of the ancient Olympic games and the ancient world of Greek mythology. Olympia is the stop after Kalamata, Nafplio and Athens, and the next stop is the island of Corfu, ancient Greek city of Meteora and Delphi and the island of Mykonos, before heading back to Athens, where you will spend a few days exploring its many sites, including the Acropolis.