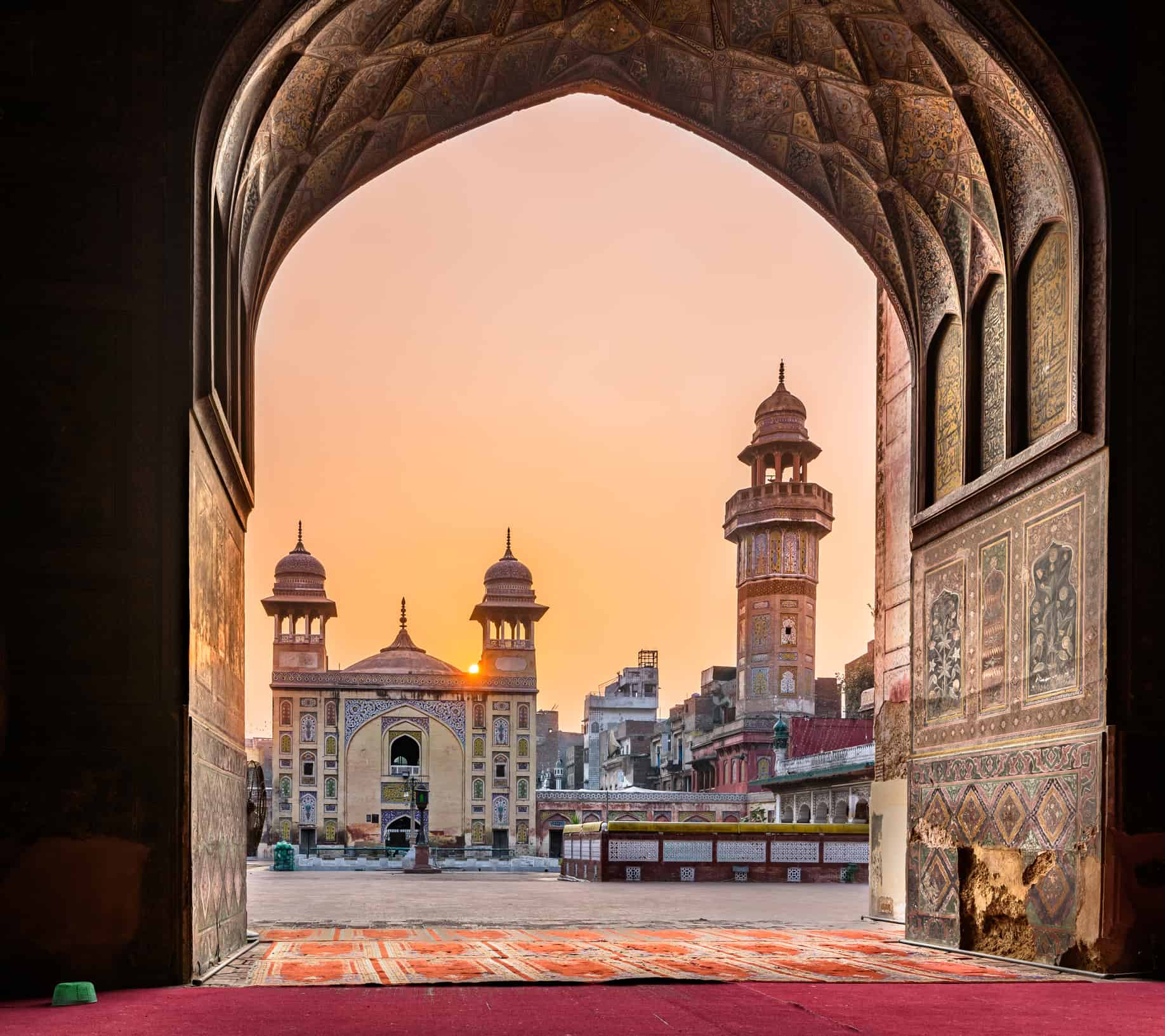 Pakistan, with its southern coast dipping into the Arabian Sea and its northern highlands dominated by the Karakoram, Himalayan, and Hindu Kush mountain ranges, promises majestic views and unforgettable experiences to the adventurous senior or mature-aged traveller.

On your Pakistan trip, there is much to explore as you learn about the long history and colourful culture of this amazing country. Visit ancient ruins, medieval capitals, and Pakistan’s pre-Muslim temples in the historic cities of Thatta, Hyderabad, Larkana, Lahore, and Peshawar. Walk through lively bazaars and scenic landscapes reminiscent of the Arabian Nights. Go further north and see breathtaking views in the region of Gilgit-Baltistan near the Pakistani border with China, the location of K2, the world’s second highest mountain next only to Mt. Everest. The region’s central valley, Skardu Valley, shares similarities in culture, lifestyle, and architecture with Tibet, and may feel like a world away from the modern wonders of the Pakistani capital of Islamabad. This allows you to experience Pakistan and all its wonders and complexities, and may just be your adventure of a lifetime.

The history of Pakistan, a young nation created with the partition of British India in 1947, is intertwined with the history of India and the broader Indian subcontinent. From 1947 to 1971, Pakistan was divided further into two: West Pakistan and East Pakistan. Following years of internal conflict, East Pakistan declared its independence in 1971 as the nation of Bangladesh, and West Pakistan became modern-day Pakistan. Prior to the 1947 partition, Pakistan’s history was India’s history. The subcontinent was home to one of the oldest and most influential human civilisations, the Indus civilisation (also known as Harappan civilisation), an urban culture that dated from 2500 BC and declined around the 2nd millennium BC.

The most well-known period in the subcontinent’s history was the rule of the Mughal Empire from the 16th to the mid-19th century. An immensely successful Muslim empire of Turkic-Mongol origin, its rulers controlled the entire subcontinent of India and reached a population of 100 million at its peak. Though a Muslim dynasty that ruled over a Hindu majority, their overall commitment to religious freedom ensured peace in the subcontinent for two centuries. Shah Jahan was an avid supporter of art and architecture, and his monuments in Lahore are still admired in Pakistan today. 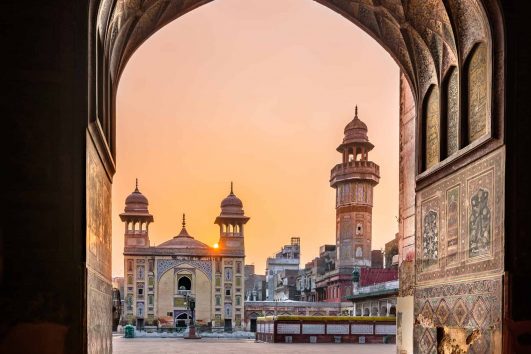 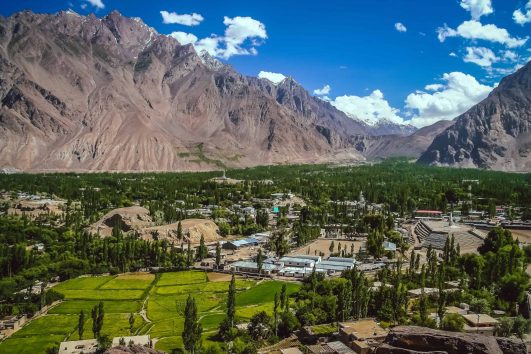 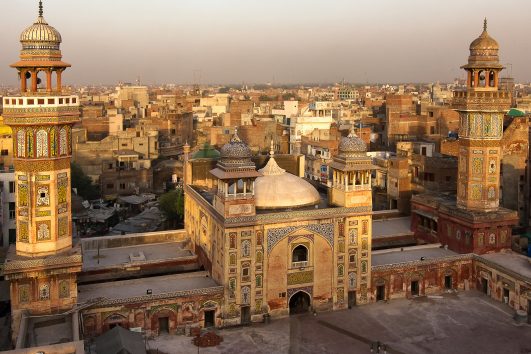 The Wazir Khan Mosque in Lahore, Pakistan, is said to be the most beautiful and most ornately decorated Mughal-era mosque.

The Skardu Valley is located in Gilgit-Baltistan in Pakistan, on the Indus River which separates the Karakoram range from the Himalayas. 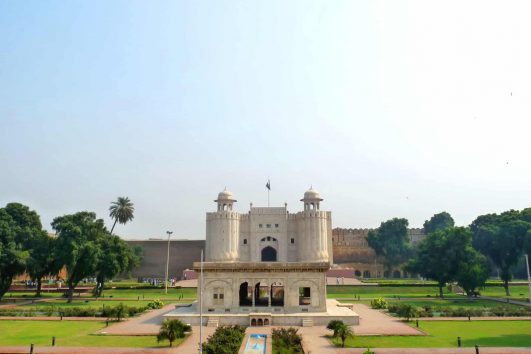 Lahore Fort is the main attraction in Lahore's old walled city, housing the marble palaces, mosques, and lush gardens from the city's golden age under the Mughal dynasty, when Lahore became the place of royal…

Pakistan, a young nation created with the partition of British India in 1947, is intertwined with the history of India and the broader Indian subcontinent.

Odyssey travels by coach and occasionally uses local transport, including trains and ferries. Specifics are always outlined in your tour itinerary. In the major cities of Pakistan, such as the capital of Islamabad, you can expect an extensive rail and bus network to use for longer travel, and taxis and even ride-share apps for shorter travel. Smaller towns and remote mountain villages will not have as extensive a transport network, and some are only accessible via private transport. We will be using private transport on our Pakistan trip.

Pakistan is a populous, multiethnic country in South Asia, bordered by Iran and Afghanistan (west), China (north), India (east), and the Arabian Sea (south). The total land area is 796,095 sq km, which is nearly twice the size of the US state of California. It is divided into three major geographic areas–the northern highlands, the Indus River plain in the center and east, and the Balochistan Plateau in the south and west–with the Punjab province in the Indus River plain as the most densely populated. Its highest point is K2 (Mt. Godwin-Austen) at 8,611 metres, the second highest mountain in the world next only to Mt Everest. Pakistan’s climate is generally arid, which means there is little rainfall, and is characterised by hot summers and cool or cold winters, with variations depending on your location.

Pakistan has six UNESCO World Heritage Sites to date. You can view the official list of the sites here. It is well worth visiting every site, if you are able. But here are a few highlights:

Pakistan is a majority Muslim country, so the Islamic religious festivals are observed in the country. Ramadan, marked by the observation of the crescent moon on the ninth month of the Islamic calendar, is the holiest month of Islam.

Two big festivals are held in the city of Lahore. Basant (Jashn-e-Baharaan) is held in February each year to welcome spring, while Mela Chiraghan (“Festival of Lights”) mark the urs (death anniversary) of the Punjabi Sufi poet and saint Shah Hussain.

Pakistani cuisine is influenced by Persian, Indian (especially Mughal-era), and Middle Eastern culinary traditions, the dishes packed with herbs, spices, and complex flavours. Those familiar with these cuisines will not be surprised to find biryani, roti, naans, and kebabs served in Pakistani restaurants. Travellers who want to stay away from meat will be delighted to find vegetarian fare such as tarka daal (lentils mixed with spices) and baingan (eggplant curry). End the meal with a sweet and refreshing treat such as falooda, traditionally made from mixing rose syrup, vermicelli, sweet basil seeds, milk, and ice cream.

Many governments advise against travel to Pakistan, but the Pakistani government and tourism board is working hard to improve overall safety and increase tourism. For example, the Swat Valley, hometown of Nobel laureate Malala Yousafzai, was once the hotbed of terrorism but is now enjoying a steady stream of tourists. The Duke and Duchess of Cambridge also enjoyed a tour of Pakistan in October 2019. Checkpoints and the sight of security personnel may be overwhelming, but they are there to keep you safe. Pakistanis are also known for being very hospitable, and may even invite you into their home for dinner.

Whenever you travel overseas, it’s always wise to take an appropriate travel adaptor. Pakistan accepts plugs of type C and D, and electricity runs at 230V/50Hz.

The Skardu Valley is surrounded by the Karakoram, a mountaineer's paradise.

The Wazir Khan Mosque is considered to be the most ornately decorated Mughal-era mosque in Lahore, Pakistan

Exterior View of Lahore Fort (Shahi Qilla) with small garden in foreground. Lahore Fort is located opposite to Badshahi Mosque in Lahore and is one of the most visited tourist destination.

What time zone is Pakistan in?

Pakistan observes Pakistan Standard Time (UTC+5), which is 5 hours ahead of Coordinated Universal Time (UTC). The nation does not observe Daylight Savings Time.

If you’re on an Odyssey tour, we take care of tipping so you don’t need to give it a second thought. In Pakistan, most high-end hotels and restaurants would add a service charge (usually 10 percent) on top of the bill. Other tipping is discretionary.

Any issues in accessing the internet?

High-end hotels and upscale cafes will be able to offer it, but overall WiFi is often spotty and some areas in the northern highlands will not have coverage at all.

What should you wear in Pakistan?

Pakistan is a conservative Muslim country, and travellers are advised to dress modestly. Women should wear a veil or head scarf, or to at least keep one at hand especially when entering sacred spaces. Wear lightweight, cotton clothing to stay comfortable in the arid climate, but bring layers if travelling during the winter.

How do you apply for a visa to Pakistan?

Pakistan has a new (circa March 2019) online visa system that is available to citizens of 175 countries, including Australia, New Zealand, Canada, the United Kingdom, and the United States. You can see, and search through, the full list of countries here. You will need passport-size photographs, a valid passport, and a letter of invitation from a tour operator if travelling with a group. If you booked your tour with us, Odyssey Traveller will provide the letter of invitation. Note that our published prices do not include the visa and associated fees and that we cannot apply for the visa on your behalf, but we can guide you through the process. The detailed application guide can be accessed here and more information about the tourist visa can be found here.