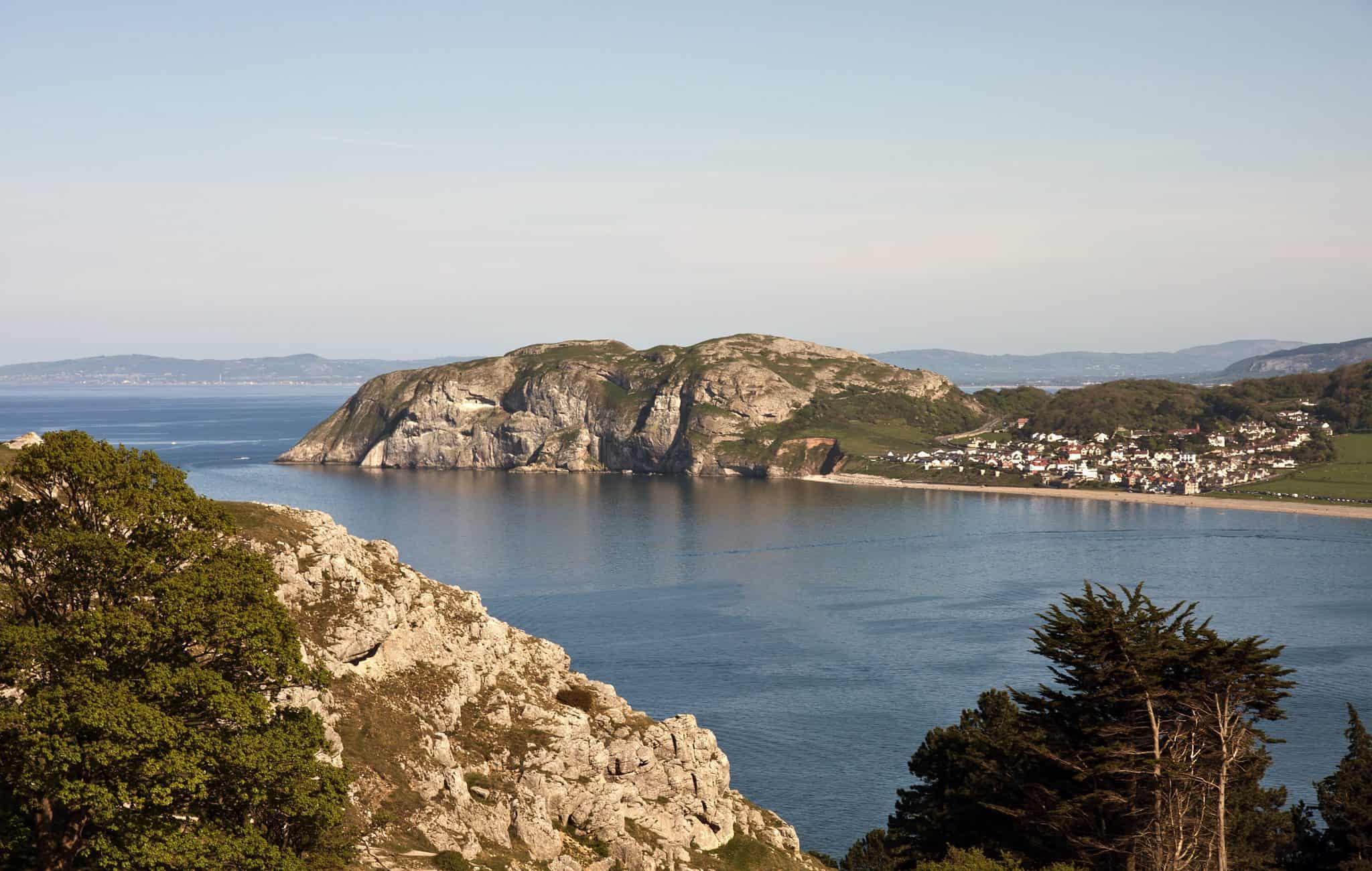 Great Orme’s Head is a prominent limestone headland on the coast in North Wales, north-west of the resort seaside town Llandudno. The Head is 3km long and 2km wide, rising to 207m at the summit, and is bounded by precipitous cliffs to the north and west. Attractions include its massive Bronze Age copper mine, rich flora and fauna, stunning views from the summit, historic Orme tramway and Llandudno cable-car, and outdoor activities.

Odyssey Traveller conducts a walking tour from Llandudno to Great Orme‘s Head as part of our 13 day tour Exploring Wales on Foot. Our walking tour takes us from Betws y Coed in the north to St. Davids in the south and encompasses a range of natural and cultural wonders to see and explore. This article explores Great Orme‘s features, history and attractions to assist in your tour of Great Orme’s Head.

The Great Orme is a spectacular headland peninsula made mostly of limestone and dolomite formed during the Early Carboniferous part of the Earth’s geological history around 330 million years ago.

The main rock type is limestone which covers the upper surface of the Great Orme including limestone pavements across several headland areas. The head also hosts rich seams of dolomite-hosted copper ore and minor units of limy mudstone and sandstone.

Beneath a hillside of the Great Orme lies a 3,500 year-old Bronze Age copper mine. Deemed the largest prehistoric copper mine in the word, it is estimated to have produced enough copper to make about 2,000 tonnes of bonze between 1700BCE and 1400BCE.

The Orme mines boasted of over five miles of tunnels, passageways, and caverns up to 230 feet below the surface at its deepest.  Most of the copper ore was malachite mined using stone hammers, animal bones, and antler picks.

Eventually the copper mines were abandoned after most of the readily accessible copper had been extracted and they reached the water table, the time by which iron had become the new material and the demand for copper was wavering.

Commercial-scale mining would again take place however from the 17th century and throughout the Industrial Revolution with an increased demand for copper and an improved ability to pump water out the mine.

Commercial-scale mining ended in the 1850s and by 1881 even small scale mining was completely abaondened. The Great Orme Mines site is currently open to the public.

The Great Orme’s environment hosts a very rich collection of flora and fauna. This includes a variety of flowers which developed in the wake of the last Ice-age grow all over the shallow lime-rich earth on the headland.

Spring and early summer flowers include Bloody Cranesbil, Thirft, and Sea Campion clinging to the sheer rock face. Meanwhile Pyramidal Orchid, Common Rockrose and Wild Thyme carpet the grassland creating spectacular display of colour.  But the rarest of all flowers is the endangered wild Cotoneaster, unique to the Great Orme, of which only six wild plants are known.

On the head wildlife include the Silver Studded Blue and Grayling butterflies which feed on the tiny limestone flowers and grasses, as well as the Great Orme goats descended from a pair of Kashmir goats presented by the Shah of Persia to Queen Victoria shortly after her coronation in 1837.

The cliffs also host colonies of seabirds, while large colonies of horseshoe bats fill the caves and abandoned mine workings, hermit crabs scuttle along the shores below, and Grey Seals and occasionally Basking Sharks cruise the sea.

Visitors can reach the Great Orme summit and its attractions from Llandudno via the Great Orme Tramway established in 1902 or the Llandudno Cable Car constructed in 1969. Attractions include the visitor centre, cafeteria, play areas, a licensed hotel, and the vintage tram and cable-car stations.

On clear days spectacular views from the summit include Winter Hill, the Isle of Man, and the Lake District.

The Great Orme also hosts an artificial ski slope, one of only two in North Wales, complete with one of the longest toboggan runs in Great Britain. Facilities for golf, tennis, bowls, windsurfing, sailing, sear or freshwater fishing and pony trekking are also nearby.

The former Great Orme Lighthouse lies at the north point of the Orme. It was constructed in 1862 by the Mersey Docks and Harbour Company as a fortress like building out of dressed limestone and vast bulks of Canadian pitch pine. The beacon, which can now be viewed at the summit’s visitor centre, remained a continuous warning to mariners until 22 March 1985.

You will be able to join a guided tour of Great Orme’s Head on Odyssey Traveller’s walking tour of Wales. Odyssey Traveller has been serving global travellers since 1983 with educational tours of the history, culture, and architecture of our destinations designed for mature and senior travellers. Tours consist of small groups of between 6 and 12 people and are cost inclusive of all entrances, tipping and majority of meals.  For more information, click here, and head to this page to make a booking.