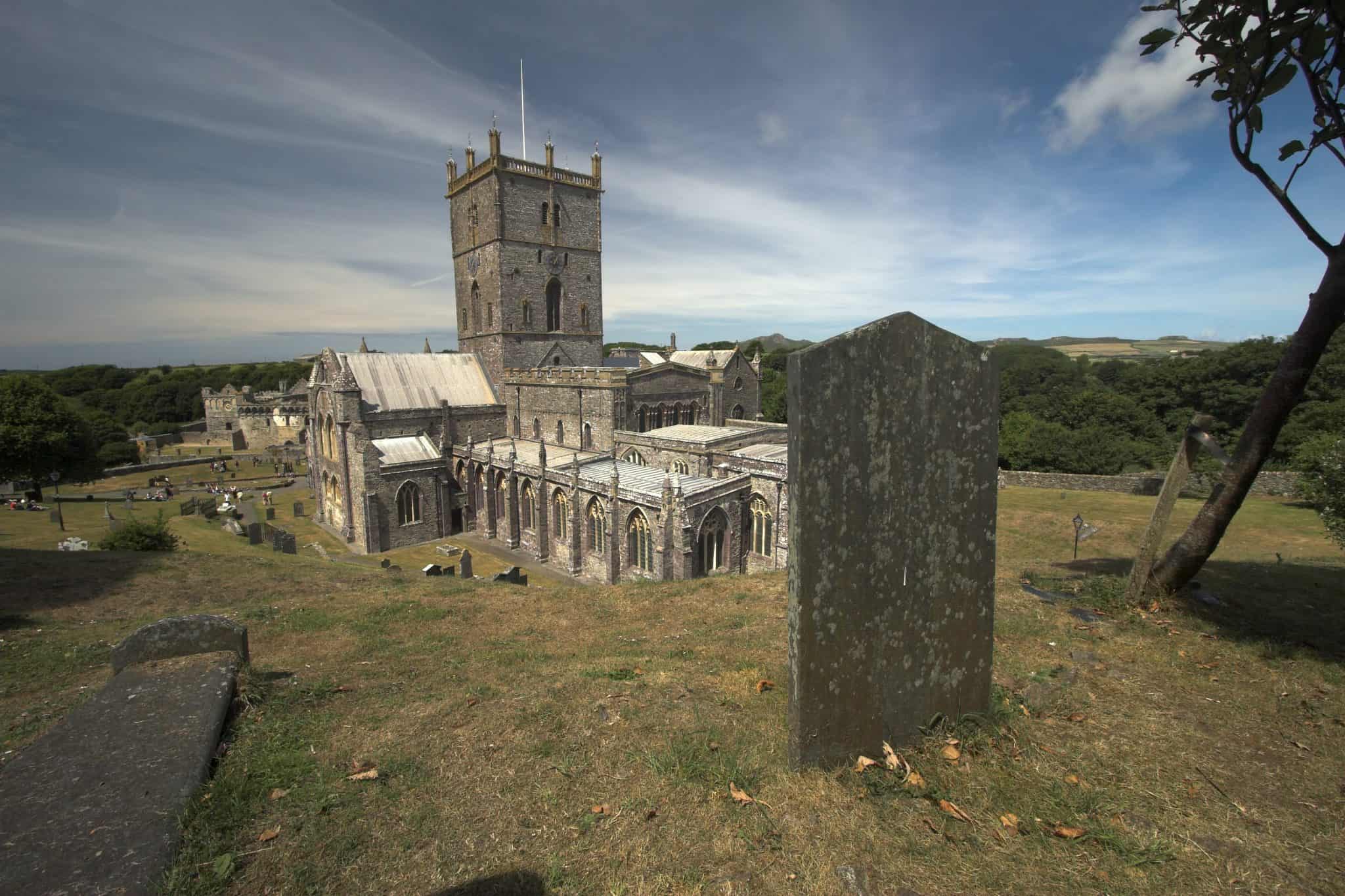 The History of St Davids

St Davids is a Welsh historic city located within the stunning Pembrokeshire Coast National Park near the tip of St Davids Peninsula, the most westerly point in Wales. The smallest city in Great Britain, consisting of four streets that meet in the ancient marketplace Cross Square, it has more of a charming feel like that of a large village. Yet despite its small space, as the birthplace of St David, the patron saint of Wales, the city holds a vast amount of history. This article explores the history to assist your tour of St Davids.

According to tradition, David was born during a fierce thunderstorm to his mother Saint Non around 500 CE. The site of David’s birth is just south of St Davids city marked by the ruin of St Non’s Chapel close to a holy well believed to have sprung up by a great thunderbolt strike the moment David was born.

St David is said to have been educated at Whitland monastery in Carmarthenshire by St Paulinus. Following his education, he then went on to establish a dozen monasteries in southern Wales and spread Christianity throughout the country. As such he is considered to be one of the most influential clergymen in all of Wales during the “Age of Saints”.

Around 550 CE he established a monastic order at what is now St Davids, and built a monastery at the site of today’s cathedral. The monks here followed a strict routine consisting of praying, celebrating masses, cultivating the lands, carrying out crafts including beekeeping, and caring for pilgrims, travelers, the poor and needy.

A settlement soon grew up around the monastery called Tyddewi (“David’s house”). 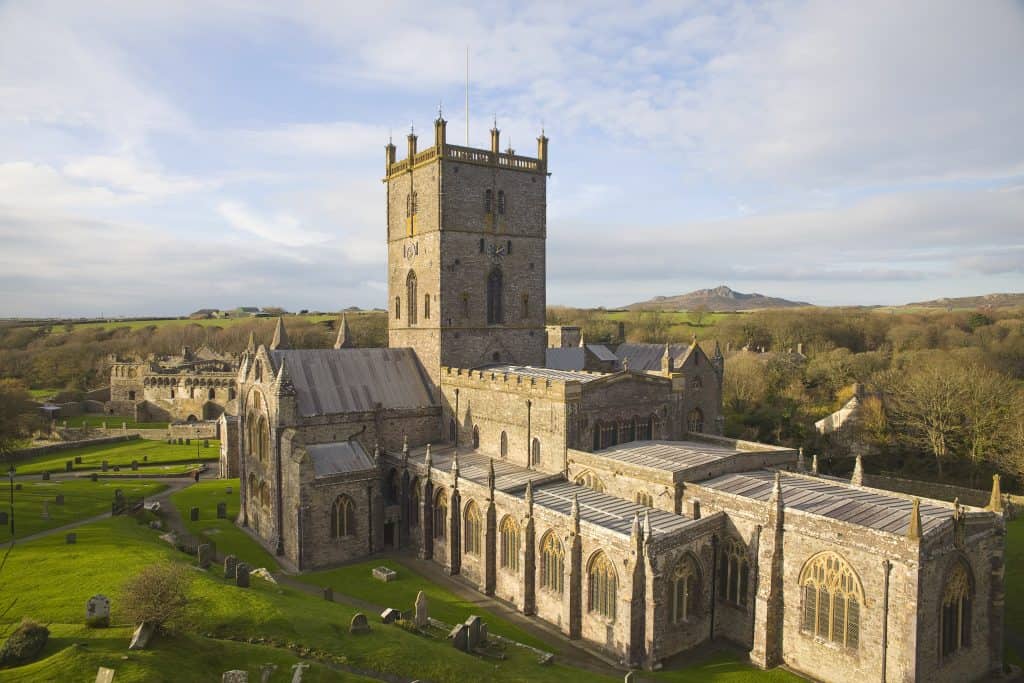 During medieval times the cathedral at St Davids, built on the site of the 6th century monastery, became one of the most important and famous Christian shines holding the bones of St David, sanctified in 1123 and shortly after proclaimed the patron saint of Wales. It also holds the bones of St Justinian (St Davids colleague) and the tombs of important Welsh nobles and church officials.

It was so significant that Pope Calixtus decreed that two pilgrimages to St Davids equaled one to Rome – and it attracted pilgrims from various nobles and kings including William the Conqueror in 1077, Henry II in 1171, and Edward I and Queen Eleanor in 1284.

The original cathedral was plundered on at least 10 occasions by the Vikings and finally burnt and destroyed in 1087. In the 12th century, the Normans seized the monastery and began to build the purple-stoned Cathedral that stands today.

Over the next 250 years many additions and periodic repairs were made, and in the 19th centuries extensive restoration of the building occurred. Today it is the largest cathedral in Wales.

Norman Bishops replaced the Welsh after they invaded Wales, and in St David exercised influence not only as spiritual leaders but also politically and militarily with enormous power over their territory. This was largely due to their vast wealth gained from the extensive income raised from visiting pilgrimages.

The affluence and power of the medieval church is conveyed by the magnificent ruins of the medieval Bishops Palace, built around 1327 by Norman Bishop Hendry de Gower, and extended a year later in grand style with the Great Hall, a centre of palace life.

The now roofless Bishops Palace’s location is adjacent to the main cathedral and is open to visitors.

The Bishops also built a 15-foot high Close Wall, pierced by four gatehouses, to enclose and defend both the palace and the cathedral in the 14th century. The Tower Gatehouse is the only structure to have survived until today.


Despite the flow of pilgrims, the settlement at St David never grew beyond a small size, maintaining a village atmosphere. So, as pilgrimages later ceased due to unpopular practices such as the selling of indulgences, and the Bishops’ incomes faded away, the city by the 19th century had become isolated and neglected.

In modern times, however, better transport and an influx of tourism have helped the city to prosper once more.

Narrow streets filled with cafes, restaurants, hotels, art galleries, and a single pub make the city a very attractive place to visit. Every May the cathedral puts on a classical musical festival popular among tourists and hosts several other concerts throughout the year.

Plus beautiful scenery is only minutes away from the city including the award winning beach and popular surfing spot Whitesands Bay, the colourful Pembrokeshire coast path on the St Davids Peninsula, and offshore islands that can be reached via boat trip. 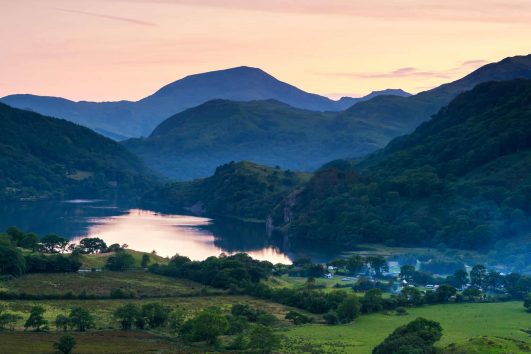