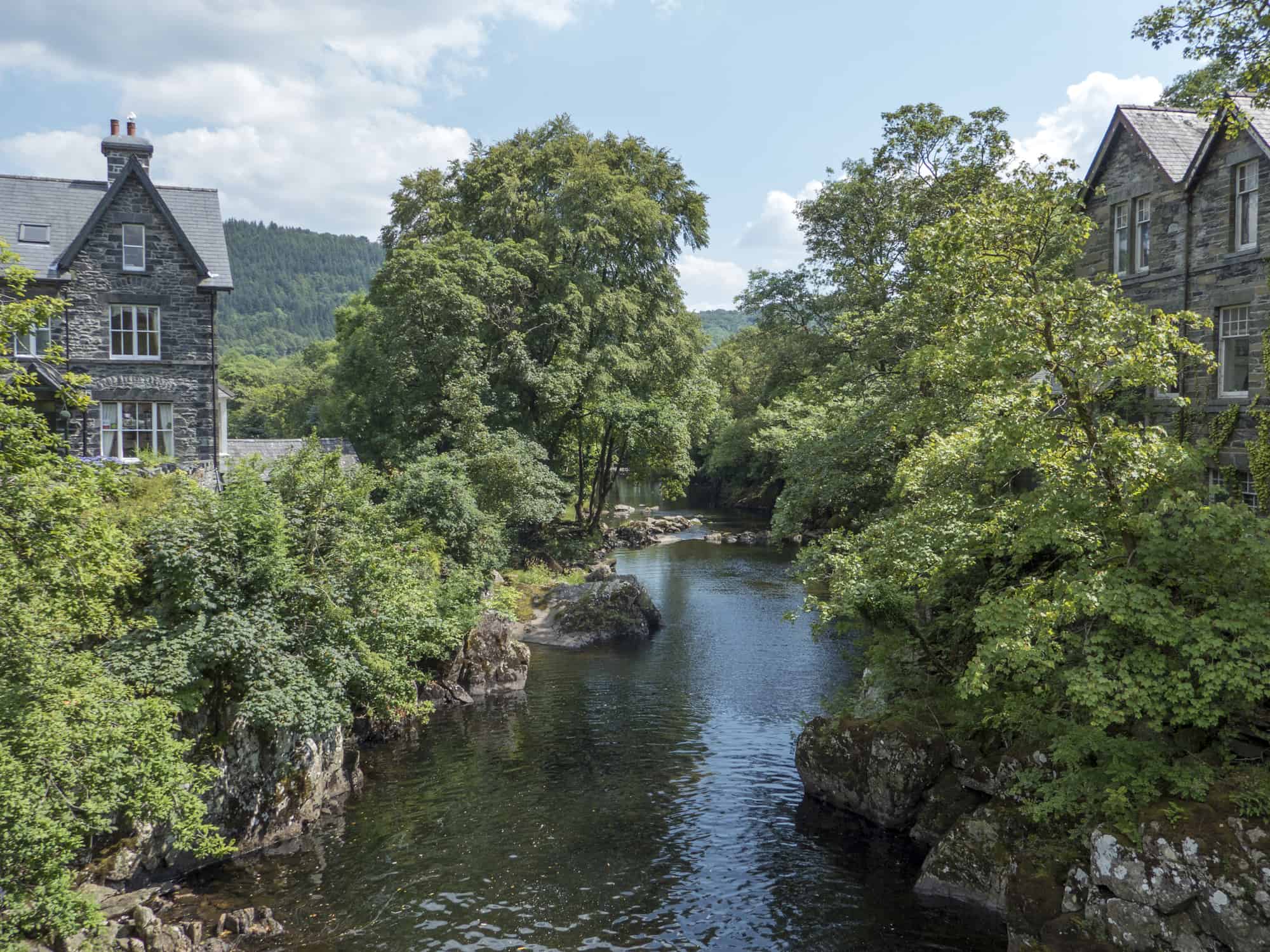 Betws-y-Coed is a village in the Conwy Valley on the verge of the Gwydyr Forest in Wales. Lying in the heart of Snowdonia National Park at the intersection of four gushing rivers, it is North Wales’ most popular inland resort and accommodation provider. The village has been attracting visitors for centuries to experience its scenic beauty and numerous outdoor activities.

Odyssey Traveller conducts a day tour of Betws-y-Coed as part of the 13 day tour Exploring Wales on Foot. Our walking tour takes us from Betws-y-Coed in the north to St. Davids in the south and encompasses a range of natural and cultural wonders to see and explore. This article explores the history and attractions of Betws-y-Coed to assist you in your tour.

Betws y Coed’s name translated as “prayerhouse-in-the-woods” tells of its origins, founded around a monastery in the late sixth century, later replaced by the 14th century church dedicated to St Michael.

The village long remained tiny only developing gradually from the late 18th-century with the growth of the local mining industry. Metal mines producing lead, zinc and copper were located in the Gwydyr Forest and around Llyn Parc, while thousands of tonnes of slate and building stones were produced from the nearby Hafod Las and Rhiwddolion quarries. Many of Betws-y-Coed’s buildings are built almost entirely of this stone.

Considerable transport-related development came in the 1820s following the opening of Thomas Telford’s new road from London to Holyhead (now the A5) across the River Conwy and through the village. The village became a major coaching centre, a popular place for en-route visitors to stay, leading to a subsequent increase in population as many decided to settle.

Construction of Betws-y-Coed railway station in 1868 and the arrival of the Conwy Valley railway line from Llandudno Junction railway station resulted in another upsurge in the number of visitors and migrants drawn by the scenic beauty of the area.

As the population rose the town expanded, notably with the enlargement of the Royal Oak Hotel (1861), originally a coaching inn, and replacement of St Michael’s Church by the larger St Mary’s Church (1873).

Artists, poets, and writers in particular were drawn to the wonderful scenery and romantic feel. As early as 1844 English landscape painter David Cox established the Betws-y-Coed artists’ colony, the first of its kind in Britain. Numerous artists continued to flock to the town to paint and socialise until the outbreak of the First World War.

Since then the village has continued to grow as a tourist destination, especially since the 1970s with the building of the A55 road, making the village a popular spot for day trippers and weekend visitors to stay at holiday cottages.

Set in a valley encircled by the fir trees of the Gwydyr Forest Park on the convergence of three rushing rivers – the River Conwy, the Llugwy River and the LLedr River – the enchantment of its beautiful scenery is hard to resist. You’ll be spoiled for choice for scenic walks and cycling routes through the trees, along river beds, lakes, and waterfalls.

Gushing Swallow Falls, is particularly celebrated as one of Wale’s most loveliest spots. Here the River Llugwy rushes down from the mountains and splits into multiple foaming waterfalls. Over jagged rocks the water tumbles into a natural pool at the bottom. A number of walking distance paths from Betws-y-coed allow you to explore alongside the river banks to the waterfall.

The beautiful upland lake, Llyn Elsi, is also just a stroll away with a wide range of footpaths providing access from the village. A natural lake, it was extended to a reservoir in 1908 by building a dam to provide Betws-y-Coed with its water. It remains a popular beauty sport for walking, bird watching, photography, and cycling, and has many other small lakes also in its vicinity.

Popular pictuersque sites also worth visting are the Conwy Falls and the beautiful Fairy Glen, in which the River Conwy flows through a narrow gorge.

Given the abundance of its surrounding natural beauty, it should come as no surprise that the village is also a centre for outdoor activities with walking, mountain biking, horse riding, canyoning and scrambling all popular.

Zip World Fforest further provides the opportunity to tackle ropes, nets and swings strung through the canopy. It also has the Fforest Coaster toboggan run and the Plummet 2, a 100ft freefall drop through a trapdoor.

The beautiful and historical bridges in Betws-y-Coed provide further popular attractions of exceptional interest. The oldest existing bridge in the village is the Pont y Pair Bridge (“Bridge of the Couldron”). Built in 1475, Pont y Pair is buffeted by foaming water after heavy rain. The Miners’ Bridge at the north of the village was crossed by the quarrymen to reach their work in the mines of the Gwydyr Forest. And Thomas Telfordin’s grand iron Waterloo Bridge built in 1815, the same year the battle of Waterloo was fought, carries the A5 across the River Conwy.

You will be able to join a guided tour of Betws-y-Coed  on Odyssey Traveller’s walking tour of Wales. We walk 4km to the picturesque Swallow Falls along Afon Llugwy. We then walk back to Betws-y-Coed via Lyn Elsi, and see the Lyn Else reservoir en route. The rest of the day is at leisure.

A Walking tour of Wales with spectacular views across as you walk the millennial path across  the Irish sea or up in Snowdonia national park. This guided tour that provides insight into the history of each castle visited and breathtaking scenery enjoyed before exploring the capital of Wales, Cardiff with day tours of Wales from Cardiff. For seniors, couples or Solo interested in  small groups.