Odyssey offers easy, convenient, and relaxed escorted small group tours across Central Europe and beyond. We explore the Czech Republic’s incredible natural beauty, its distinctive Bohemian heritage, World Heritage Sites, and beautiful cities, all with some truly spectacular scenery along the way. This and more is all waiting to be explored on one of Odyssey’s small group tours of the Czech Republic, designed for the senior traveller, and led by experienced, and enthusiastic like minded people.

Nestled in the heart of central Europe, the Czech Republic is a magical land filled with charming medieval architecture and picturesque scenery. Wander through the enchanting streets of Prague – packed with medieval, Art Nouveau, and quirky modern architecture. Outside the capital, explore the castles and medieval towns that dot the lands of the Czech Republic. Join Odyssey Traveller as we take you on a journey through this wonderful travel destination.

Odyssey travels by coach and occasionally uses local transport, including trains and ferries. Specifics are always outlined in your tour itinerary. The Czech Republic has one of the largest rail networks in Europe, with fairly affordable train services operating across the length and breadth of the country. Bus services are also widely available, and are often less expensive than trains. Taxi cabs can be found in many cities and towns, although beware of being ripped off by unscrupulous unofficial cab drivers.

The landlocked country of the Czech Republic covers a total area of 78,867 square kilometres. Two thirds of the country is occupied by the by the river basin of Bohemia, through which the Elbe and Vltava rivers flow. Low mountains and hills ring the Bohemian river basin, with the country’s highest point, Snezka, situated in the Krkonose mountains in the northeast. The region of Moravia in the eastern half is hilly, and is drained predominantly by the Morava river.

The Czech Republic has a mostly temperate oceanic climate, with warm summers and cold winters. Depending on when you intend to travel, check the weather reports and dress accordingly.

Lednice-Valtice Cultural Landscape, which features classical and neo-Gothic design principles and holds one of the largest artificial landscapes in Europe

Holy Trinity Column in Olomouc, the ornately decorated monument which stands in the town of Olomouc

The Czechs love to celebrate, with many different festivals and events held across the country throughout the year. Pagan rituals and and traditions that predated the arrival of Christianity in Czech lands are still preserved through distinctive festivals such as the Burning of the Witches, whereupon effigies of witches are burned to ward off evil spirits, and the Harvest Festivals, whereby a successful harvest was traditionally celebrated with singing, dancing, and feasting. The performing arts are celebrated in the Czech Republic, with events such as the Prague Spring International Music Festival and the Karlovy Vary International Film Festival showcasing the country’s love for the creative arts. Given the Czechs love of beer, it would only be natural that an entire festival would be dedicated to the creation and consumption of the most popular beverage in the Czech Republic. The Czech Beer Festival is held over 17 days in May, with over 120 different beers on offer, and features people dressed in traditional Czech costumes and live music performances.

A History of the Czech Lands, by Jaroslav Panek and Oldrich Tuma
Magic Prague, by Angelo Mario Ripellino
Gottland, by Mariusz Szczygiel
The Metamorphosis, by Franz Kafka

Like much of Central Europe, the fare in the Czech Republic is generally hearty, with soups and stews prominently featuring in Czech cuisine. Meats and vegetables are often cooked in the form of soups, with notable soups including kulajda (potato soup made with mushrooms, dill, vinegar and a poached egg) and rajská omáčka (tomato soup served with cooked beef and onions). The Czech Republic shares the guláš (goulash) dish with its Hungarian neighbours, though the Czech version tends to be more meat heavy and is more of a sauce than a soup. Sweeter offerings include palačinky, thin pancakes served with jam, fruit, or cream, and trdelník, a pastry made from wrapped around a stick, heated over an open flame and coated with sugar, nuts or cinnamon.

Generally speaking, Czech Republic is safe to travel in, though always exercise common sense while travelling. Beware of criminals using fake police ID asking to check the authenticity of your foreign currency and passports. Aslo be advised that pickpocketing does occur, so keep your valuables close and pay close attention to your personal security.

Whenever you travel overseas, it’s always wise to take an appropriate travel adaptor. The electricity supply in Czech Republic runs at 220V and 50Hz. Czech Republic uses the Type D and Type M electric plug types, so make sure you have the right travel adaptor with you. 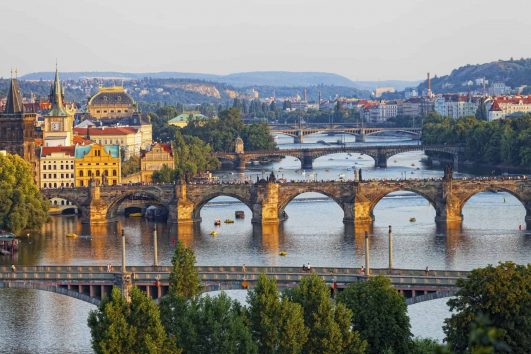 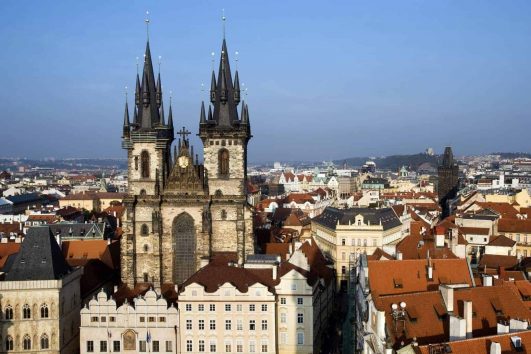 Prague Castle, the stunning 9th-century castle which has long stood as a seat of power for the region. 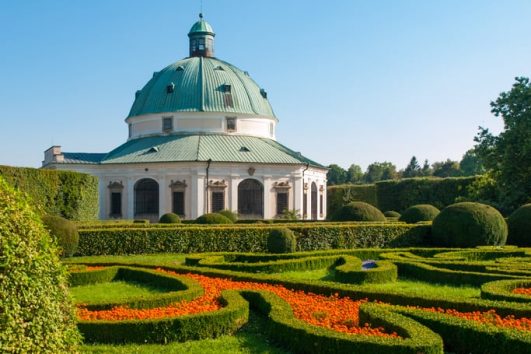 Kroměříž Gardens, the elegant Baroque-style gardens located in the grounds of Kroměříž castle.

What time zone is the Czech Republic in?

Is tipping customary in the Czech Republic?

If you’re on an Odyssey tour, we take care of tipping so you don’t need to give it a second thought. However, in your free time, or if travelling independently, it’s essential that you tip an appropriate amount for services. Tipping is fairly common in the Czech Republic, with a tip of around 10% commonly expected amongst restaurant servers, hotel staff, and tour guides.

Wifi should be freely available in most hotels, cafes and restaurants.

Can I use my mobile/cell phone while in the Czech Republic?

Check with your cell phone provider to see whether you’re able to make calls and use data while in the Czech Republic. Many providers will allow you to pay a daily fee that allows you to make calls and check the internet while only being charged your regular rates. However, be certain to inform your provider that you’re heading overseas, because just like a bank they can turn off your service as a result of unusual activity.

When is the best time to visit the Czech Republic?

The best time to visit the Czech Republic is considered March – May and September – November, when the temperature is pleasantly warm and not too hot and tourists do not flock the streets (peak season is June – August).

Articles about the Czech Republic published by Odyssey Traveller:

Music and the Austrian Hapsburgs: As an important part of the Austro-Hungarian Empire, the Czech lands were home to many of its most famous composers, including Antonín Dvořák and Gustav Mahler.

Eight Amazing Rail Journeys: Including the Gdansk-Trieste Railway, which passes through the Czech Republic.

External articles to assist you on your visit to the Czech Republic:

24 Hours in Prague: An Alternative Guide to the New East’s Tourism Capital

CNN Travel: 11 Amazing Places to visit in the Czech Republic

The Guardian: Czech out Brno