Albania sits on the Ionian Sea and Adriatic Sea in southern Europe, bounded by Montenegro, Kosovo, Macedonia, and Greece. This small country is dominated by the Albanian Alps. An Albania small group tour explores the Balkan peninsula with its roots in ancient Illyrian society that influenced Albanian culture.

Albania existed in relative isolation for many centuries until its transition to democracy in the 1990s. What was once ” Europe‘s enigma” Albania Tours now welcomes the curious mature and senior travellers who want to explore, learn and see Albania‘s spectacular scenery in the mountain regions and national park network of central Albania, understand the Ottoman empire and the ancient city of Berat. As well the historic importance of Albanian coastline on the Adriatic sea, the Ionian sea and Mediterranean where today pristine beaches on the Albanian riviera appeal.

An 18 day small group tour  tour takes you deep into the the Balkan Peninsula. Starting in Dubrovnik, travel through Croatia, Bosnia & Herzegovina, Serbia, Macedonia and Albania before returning to Dubrovnik.

Many tourists travel and tours Albania to experience its natural beauty and view the ruins of monuments left behind by the Romans, Byzantines, and the Ottoman empire, who once ruled the country as part of their respective kingdoms. Albania is a worthy stop in a trip to the Balkans, which usually includes trips to nearby Croatia, Bosnia and Herzegovina, and Serbia.

The 2400-year-old ancient city of Berat, originally an Illyrian settlement, is a UNESCO World Heritage Site and a highlight of your trip to Albania. Another World Heritage Site is the Archaeological Park of Butrint, located in the southern Albania. Butrint, known in ancient times as Buthrotum, was an important settlement for the Greeks and the Romans as it was near the Greek island of Corcyra (present-day Corfu) on the route from Italy to Greece down the Ionian Sea. The coastal town of Saranda is part of the Albanian Riviera, known for its deep, blue waters and bustling nightlife, is a popular entryway to Albania for travellers coming from Greece, and a great jump-off point for the beach and spectacular scenery.

On an Albania small group tour from Odyssey, you will learn more about this long and fascinating history and Albanian culture whilst exploring its famous sights and hidden gems. 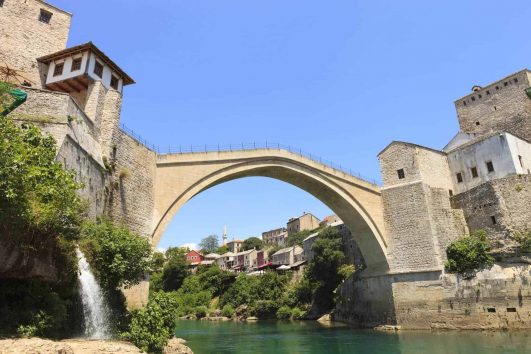 A History of the Balkans: Albania and North Macedonia

Sprawling eastwards from the doorstep of Western Europe, the Balkan region has had a long, convoluted and fascinating history. Read on to learn about the region’s history, starting with the problem of the ‘Balkans’, and… 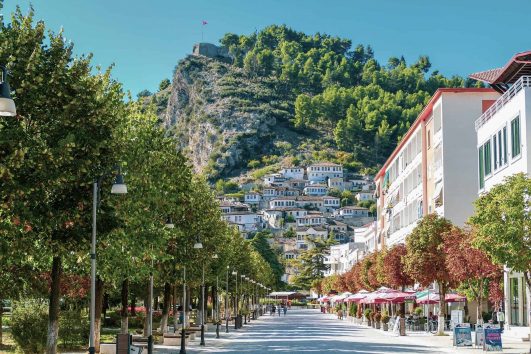 Uncovering Albanian History Albania sits on the Ionian and Adriatic Seas in southern Europe, bounded by Montenegro, Kosovo, Macedonia, and Greece. This small and mountainous country in the Balkan peninsula had roots in ancient Illyria,…

Odyssey’s Albania small group tour travels by coach and occasionally uses local transport, including trains and ferries. Specifics are always outlined in your tour itinerary. Buses are cheap and commonplace in Albania, and are a fairly convenient way to get around.

Furgons (privately run minibuses) are also common, though they tend to become crowded and and timetables are not always strictly followed by drivers. The rail network is quite limited, so taking the train might not make the best option for transportation.

In Tirana the major city, Odyssey stays in centrally located 4 star hotels, close to the ancient city with easy access to public transport. In smaller towns or rural areas, we usually stay in family-run hotels or guesthouses.

On our longstay tours, during which you spend the length of the tour in a single location, we use serviced apartments.

Odyssey tour itinerary for a small group tour always engages local guides with regional knowledge to deliver the guided tour for a region to ensure an authentic experience during which you can learn as much as possible about the history and culture of places you visit in Albania as part of your escorted tour.

Much of Albania is comprised of hills and mountains, with several mountain ranges, such as the Albanian Alps, the Sharr Mountains, the Accursed Mountains, the Pindus and the Ceraunian Mountains running down the length of the country from Northern Albania. Numerous rivers run through the country, the longest of which is the Drin, which flows for 285 kilometres. Despite being a relatively small country, Albania is home to a diverse array of wildlife, with 799 protected areas in Albania.

Albania experiences variations in climate, depending on the region – the coastal areas tend to experience hot summers and cool winters, while the mountainous areas feature short, mild summers and cold winters. Depending on when and where you intend to travel, check the weather reports and dress accordingly.

Butrint, an archaeological site containing the ruins of previous settlements of Greeks, Romans and Byzantines.

The Ottoman Empire is seen in the UNESCO world heritage site of Historic old town of Berat and Gjirokastra. Both ancient towns preserve the Ottoman architecture for a great walking tour

Ancient and Primeval Beech Forests, which stand as a prime example of undisturbed temperate forests and the remarkable ecological patterns characteristic to this tree species.

These sites are included in a tour itinerary of  these small group tours of Albania.

Albania celebrates its heritage and cultural traditions through several festivals and events throughout the year. Every year, the National Festival of Urban Folk Songs is held in March, with the traditional folk songs and music of Albania celebrated through the staging of live performances and recitals. The Gjirokaster Folk Festival is  another event of national significance – held every 5 years, it showcases traditional Albanian clothing, music, dance, and arts. More contemporary-minded events include the International Festival of Modern and Contemporary Dance and the Tirana International Film Festival.

Dairy, seafood, and meat feature prominently in Albanian cuisine offered in the local restaurant. Yogurt, whether sweet or sour, frequently appears in Albanian dishes, including tavë kosi, which is lamb baked in an earthenware dish with eggs and yogurt. Seafood is widely available and consumed along Albania‘s coastline, with mussels, shrimp, fish and grilled octopus featuring prominently in Albanian coastal food. Meats are important part of Albanian cooking, whether grilled and skewered, cooked as a stew or ground up and eaten as meatballs (kofta). Perhaps the most popular dish in Albania is byrek, which is made from sheets of filo pastry layered over spinach, cheese, and meat.

Like elsewhere in the southern Balkans, rakia (fruit brandy) is popularly consumed and is served as an apertif. Coffee remains a central part of social life in Albania, with Turkish coffee being particularly popular.

Generally speaking, Albania is safe to travel in, though always exercise common sense while travelling.

Whenever you travel overseas, it’s always wise to take an appropriate travel adaptor. Albania’s electricity supply runs at 230V and 50Hz. Albania uses Type C and Type F electric plugs, so make sure you have the right travel adaptor with you.

The best of Albania 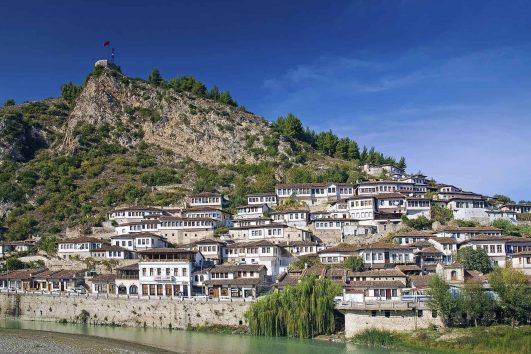 The 2400-year-old city of Berat, originally an Illyrian settlement, located in southern Albania. 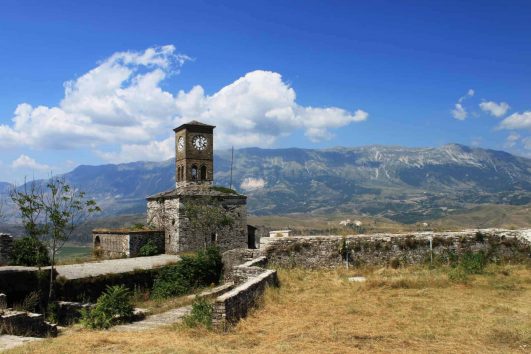 A clocktower in the fortress of Gjirokastra, hometown of Albanian leader Enver Hoxha 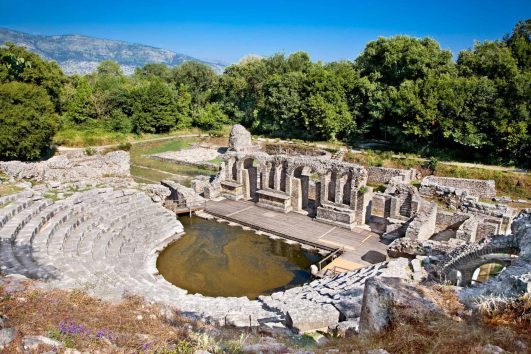 Butrint, known in ancient times as Buthrotum, was an important settlement for the Greeks and the Romans. 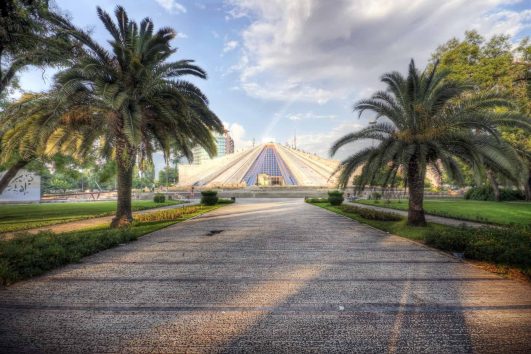 What is the time zone in Albania?

Should you tip in Albania?

If you’re on an Odyssey small group tour for mature and senior travelers, we take care of tipping so you don’t need to give it a second thought.

However, in your free time, or if travelling independently, it’s essential that you tip an appropriate amount for services. Tipping is not particularly common in Albania, though is appreciated. That said, it is reasonably common to round up the bill for restaurants or taxis.

Wi-fi should be freely available in most hotels, cafes and restaurants.

Albania has a Mediterranean climate with warm, dry summers and mild, wet winters, but this varies depending on where you are in the country. The western part of Albania, including the capital Tirana and coastal towns, is influenced by the warm air from the Adriatic and Ionian sea, while the eastern part of the country has higher elevations and have mild summers and cold winters. On average, Tirana experiences a high of 12 degrees Celsius in January and 31 degrees Celsius in August.

What is the currency of Albania?

The official currency of Albania is the Lek. The currency symbol for the Lek is L. The lek is divided into 100 qindarka; however, the qindarka is no longer produced.

When is the best time to visit Albania?

The best time to visit Albania is between April – June, and September – October, when the weather is not too warm or cold and tourist season is not in full peak.

External articles to assist you on your visit to Albania.