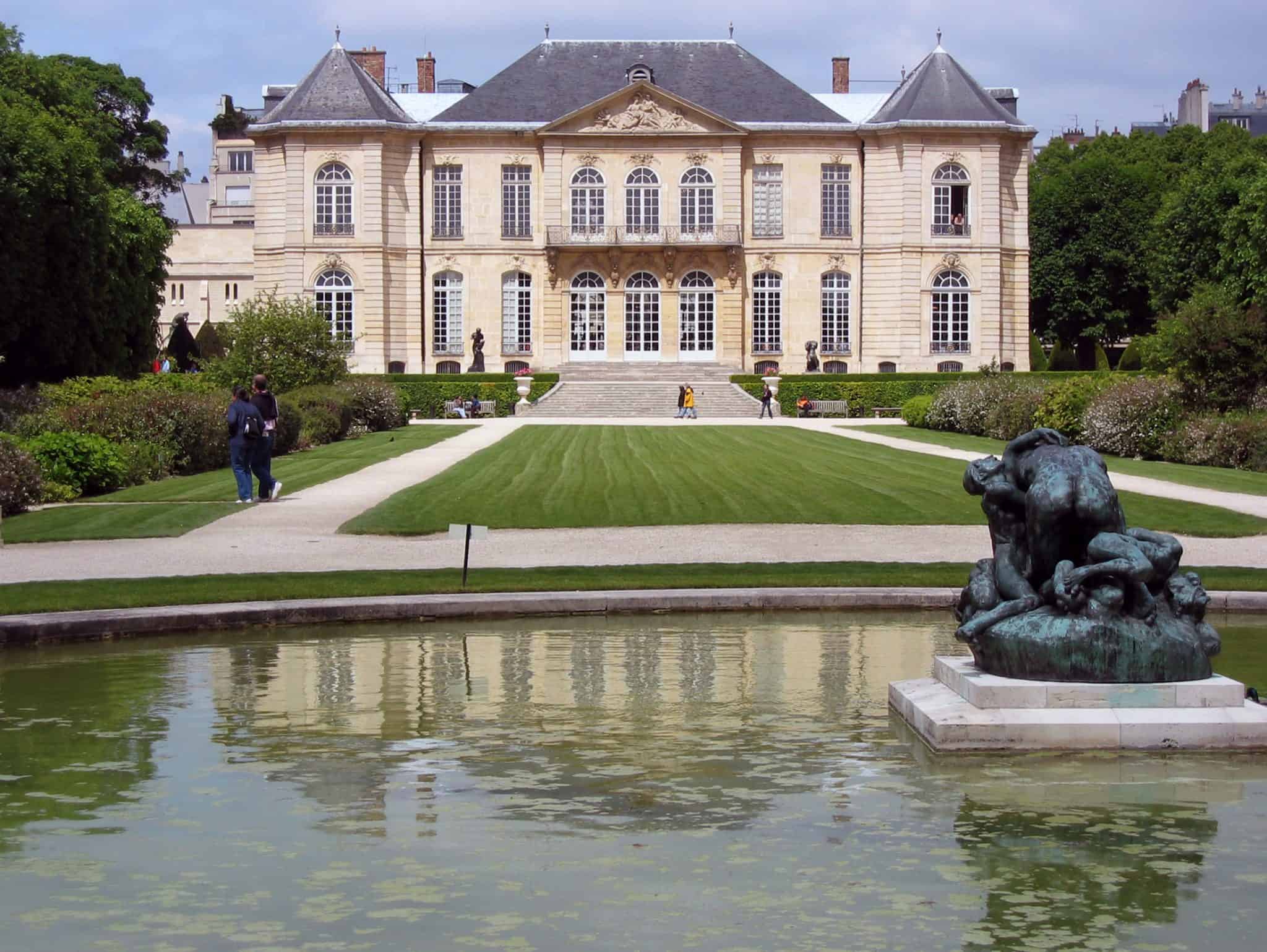 The world’s most extensive collection of Auguste Rodin’s work, displayed in the beautiful house and gardens of the Hotel Biron, the Musee Rodin is a highlight of any trip to Paris.

Odyssey Traveller visits the Musee Rodin as part of our in-depth tour of Paris, 21 Days in Paris. One of our celebrated long stay tours, this guided tour takes you beyond the standards of Paris sightseeing (Eiffel Tower, Versailles Palace, and the Arc de Triomphe) in favour of exploring some of the city’s lesser-known museums and historical sights. Living like a Parisian in a self-catered apartment, our city tour will give you an authentic experience of the ‘city of light’.

August Rodin was born on November 12, 1840, in a working-class area south of the Seine. Displaying artistic interest from an early age, he convinced his father to allow him to attend art school, where he honed his powers of observation and ability to draw from memory and began to sculpt. After finishing, Rodin applied three times to the École des Beaux-Arts, one of France’s most prestigious art schools, but failed each time. In order to help support his family, Rodin went to work as craftsman of decorative objects, but struggled to have his art recognised.

In 1875, Rodin visited Italy for two months. Inspired by the works of Michelangelo and other Italian Renaissance sculptors, he created his first great work, The Age of Bronze. A life-size male nude, the man’s posture pays homage to Michelangelo’s Dying Slave, which is held in the Louvre Museum. Accepted by the Paris salon in 1877, the statue caused controversy for its resemblance to reality, with some accusing Rodin of putting clay on a living man. Though he vigorously denied the accusation, the scandal made the artist, as crowds flocked to see for themselves. The statue can today be seen at the Musee d’Orsay and the Musee Rodin.

Thanks to the fame of The Age of Bronze, Rodin was commissioned by the French government to design a portal for a future museum of decorative arts. Inspired by Dante Alighieri’s Divine Comedy, Rodin would work on The Gates of Hell project for the rest of his life. Though the museum never materialised, Rodin continued to work on the sculptures until his death in 1917.

The Thinker, possibly Rodin’s most famous statue, was designed to sit at the centre of The Gates of Hell. The nude figure, in the tradition of Michelangelo, is cast in bronze, representing poetry, philosophy, and the intellect.

Another iconic Rodin sculpture, The Kiss, also originated in The Gates of Hell. It was first called Francesca da Rimini, as it depicts the 13th century Italian noblewoman, portrayed in Dante’s Inferno, who falls in love with her husband’s younger brother when reading the story of Lancelot and Guinevere. The couple are discovered and killed by her husband. In the sculpture, the couple’s lips do not meet, implying that they were interrupted mid-embrace.

By the turn of the 20th century, Rodin had become one of the most acclaimed artists of his time, a national institution. In 1907, Rodin agreed to donate his works to the French state on his death – on the proviso that they be displayed in his 18th century mansion, the Hotel Biron, located in the exclusive 7e arrondissement on the southern bank of the Seine River. The museum opened in 1919, two years after the sculptor’s death.

The Musee Rodin holds the world’s largest Rodin collection, with more than 6000 sculptures and 7000 works on paper. Beyond Rodin’s works, the museum also displays the largest collection of the works of Camille Claudel, Rodin’s protege and muse, a talented and original sculptor who did not see her work recognised until after her death. The museum also contains a number of Monet and Van Gogh paintings from Rodin’s personal collection.

The Musee Rodin is one of the highlights of Odyssey’s tour of Paris, 21 Days in Paris. Designed to provide an in-depth experience of the French capital, our sightseeing tour is designed to take you to some of Paris’s hidden gems. Our local tour guide takes you through the Latin Quarter and Saint Germain haunts of the great writers of Paris and on a walking tour to the spot where Louis XVI and Marie Antoinette, among others, were executed by guillotine during the French Revolution. We window shop in the exclusive boutiques of the Champs Elysees, visit the artists neighbourhood of Montmartre (including the Moulin Rouge), and enjoy sweeping views of the city from Sacre Coeur basilica.

Getting out of the city, the tour includes a day tour to Amiens, home to a UNESCO World Heritage listed cathedral and the late-19th century home of Jules Verne. Another day trip takes us to the Chateau de la Vaux le Vicomte, a baroque palace to rival Versailles or the chateaux of the Loire Valley. We explore the medieval heart of Paris at Notre Dame Cathedral and Sainte Chapelle, and enjoy a performance at the iconic Palais Garnier (Opera Garnier). Our city tour also leaves plenty of time for independent activity, whether that be finally seeing the Louvre, Eiffel Tower, or the Palace of Versailles; a food tour of one of Paris’s markets; a river cruise down the Seine; or a bike tour through one of the many parklands of the Ile de France.

If you’re thinking about making a trip to France, considering joining our tours in Paris. Since 1983, every Odyssey tour has been designed by our tour director to meet the needs of active and engaged mature and senior travellers. We travel in small groups – generally between 6 and 12 – and every tour guide is chosen for their extensive local knowledge.

The cost of this Paris trip includes accommodation, public transport fares, five dinners, and admission fees for museums and other sights. In general, an Odyssey bus tour includes transport on a comfortable modern coach, accommodation, entrance fees, and a number of meals.