Alfama is Lisbon’s oldest extant neighbourhood, built in the 8th century during the Muslim conquest of Portugal and neighbouring Spain. Under the Umayyad Caliphate, Lisbon became one of the largest cities in Europe. “Alfama”–from the Arabic al-Hamma, “public baths”–constituted the whole of the city in this period. Alfama is a warren of streets and alleyways on a hilltop facing the Tagus River, its labyrinthine layout a legacy of Islamic settlement. The city’s Umayyad rulers built town walls that still remain standing to this day. Moor rulers also enlarged Castelo de Sao Jorge (St George Castle), initially a small fortress.

Christians would retake the city in 1147 as part of the Second Crusade. However, unlike most of Lisbon, the area remains intact in its medieval form, having survived the great earthquake that destroyed most of Lisbon in 1755.

Overlooking Alfama and the rest of Lisbon is the hilltop Castelo de Sao Jorge, a royal castle until the 1500, when Manuel I moved to a bigger, more magnificent riverside castle (Paco da Ribeira) that mirrored Lisbon’s staggering new wealth in the Age of Discovery. Sao Jorge offers a great view of the city, but Alfama itself has other terraces (miradouros) which serve as lookout points, such as the Miradouro de Santa Luzia, which is near a church of the same name. Also nearby is the Museum of Decorative Arts (Museu de Artes Decorativas), housed within a 17th-century mansion.

For a closer look, a walking tour of Alfama is the best way to explore this medieval district. There are free walking tours you can join, taking you through Alfama’s steep, cobblestoned streets. You can wander the narrow lanes of houses and grocery stores, and even buy fish direct from doorways. 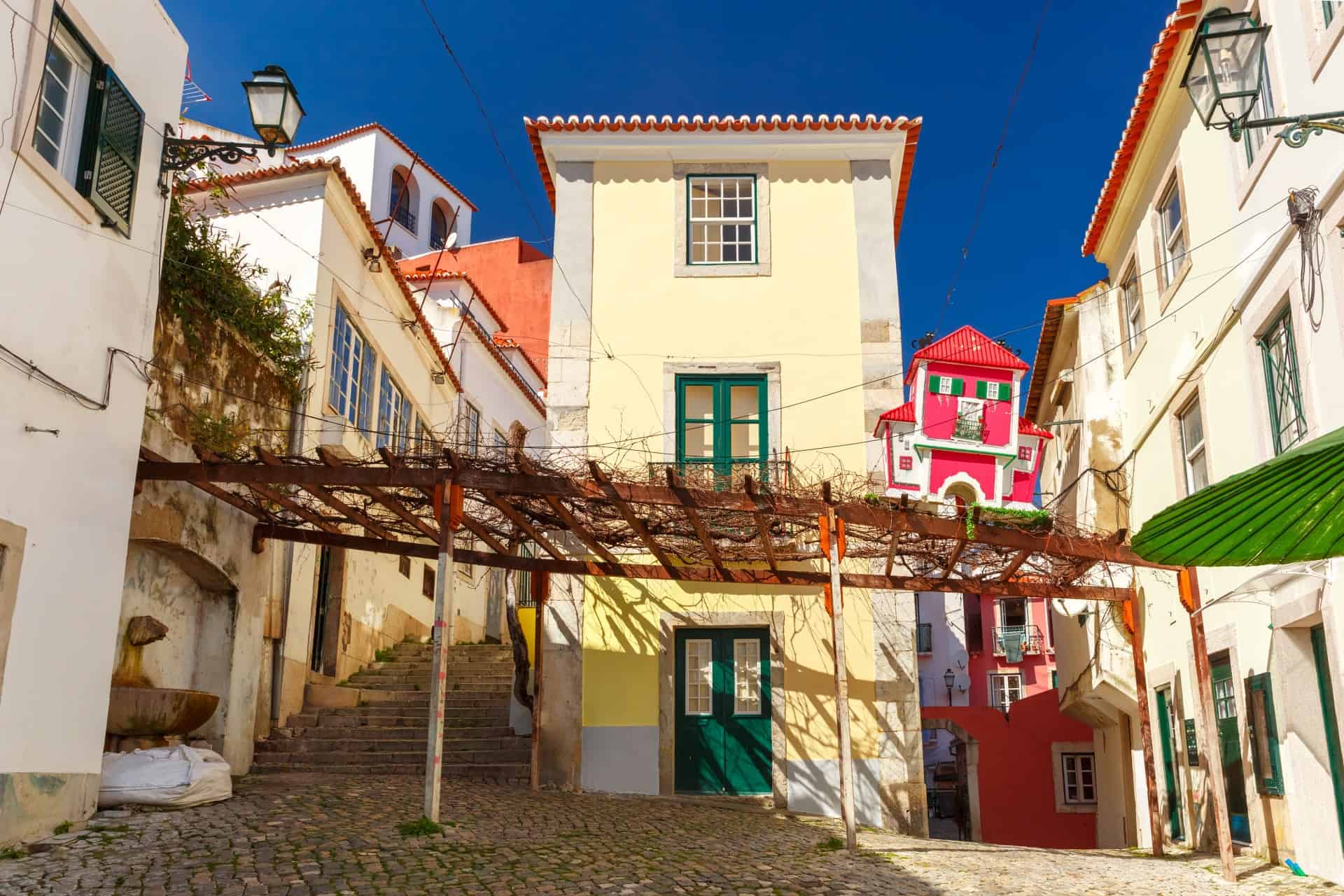 Alfama was once the home of Lisbon’s upper class, but after the 1755 earthquake destroyed most of their majestic homes, the area became more working class. These historical changes are reflected in the maze-like, hodgepodge structure of the district. There are also many churches in the area, including the 12th-century Lisbon Cathedral and the 16th-century Monastery of Sao Vincente de Fora.

The Feira da Ladra is a flea market on the edge of Alfama, operating in this location since the late 1800s. You can get various trinkets and items here, such as handmade jewellery or authentic Portuguese tiles.

Finish your explorations at one of the many lovely cafes and restaurants serving traditional Portuguese cuisine and international dishes. Enjoy your meal while listening to fado (“fate”) music. This expressive, melancholy form of Portuguese music originated in the 1820s in Lisbon and is often played in pubs and restaurants. In 2011, it was added to UNESCO’s list of the World’s Intangible Cultural Heritage. Amalia Rodrigues, born in the Alfama district in 1920, and was considered one of the greatest fado singers. Her home is now a museum, Casa-Museu Amália Rodrigues.

On your trip to Lisbon , you can also follow the tram tracks on one of its antique yellow 1930s trams. The number 28 tram goes through Alfama. 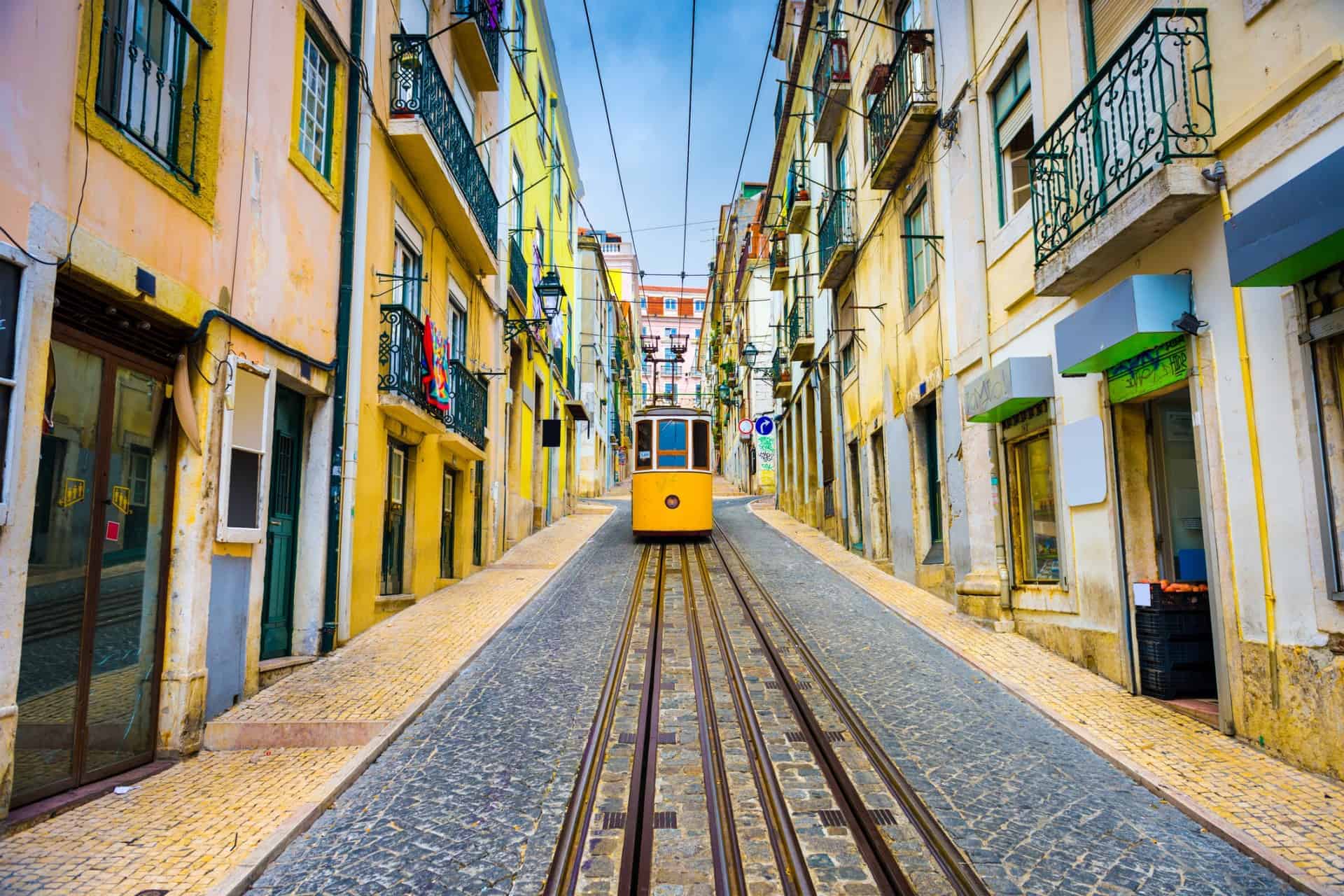 You can also take the tram from Figueira Square in the city centre to Belem (number 15 or 27) and get off at the Jeronimos Monastery. You can then continue your walk and sample Portugal’s famous dessert, pastel de nata.

External articles to assist you on your visit to Portugal