Odyssey offers easy, convenient, and relaxed escorted small group tours across the Balkans and beyond. We explore Bosnia’s incredible natural beauty, its ancient heritage, National Heritage Sites, and fascinating eclectic cities, with some truly spectacular scenery along the way. This and more is all waiting to be explored on one of Odyssey’s small group tours of Bosnia, designed for the senior traveller, and led by experienced, and enthusiastic like minded people.

Standing at the western edge of the Balkans, Bosnia and Herzegovina combines beautiful mountain scenery and enchanting rural charm. The country’s rich and tragic history has left an indelible mark but it does not overshadow its bright and vibrant future and there is plenty to explore in modern-day Bosnia and Herzegovina. With a mix of Ottoman and Slavic influences represented in the country’s architecture, cuisine and culture, you are sure to be enchanted by this fascinating Balkan nation.

In mountain-ringed Sarajevo, you will find a unique mix of cultures and faiths represented by a dazzling architectural medley of churches and museums. It is hard not to be captivated by the city’s colourful street life and East-meets-West-style skyline. On the banks of the dazzling Neretva River, Mostar is fast becoming a premier travel destination despite its war scars. With attractive Ottoman architecture, it has an enchanting old town centre and is home to one of the Balkan’s most famous bridges. Outside of the cities, enjoy craggy mountain scenery dotted with medieval ruins and breathtaking waterfalls.

An 18 day small group tour tour takes you deep into the the Balkan Peninsula. Starting in Dubrovnik, travel through Croatia, Bosnia & Herzegovina, Serbia, Macedonia and Albania before returning to Dubrovnik.

Articles about Bosnia and Herzegovina

Odyssey travels by coach and occasionally uses local transport, including trains and ferries. Specifics are always outlined in your tour itinerary. The bus network in Bosnia and Herzegovina is fairly extensive, with bus routes covering the length of the country. Train services are also available, though are slower and are more limited in both availability and transportation coverage.

Aside from the Mediterranean climate experienced in the country’s far south, most of Bosnia and Herzegovina experiences a continental climate, with hot summers and cold winters. Depending on when you intend to travel, check the weather reports and dress accordingly.

Numerous festivals and events dot the calendar in Bosnia and Herzegovina. One of the largest cultural events in the country is Bascarsija Nights. Held during the month of July in Sarajevo, Bascarsija Nights features many live performances, including opera, ballet, and theatrical shows, as well as film screenings and literary evenings. Summer on the Vrabas, an athletic carnival held in July, plays hosts to many sporting competitions, including soccer, basketball, beach volleyball, diving, and even competitive fishing. For a glimpse of the region’s medieval past, the Stolačka Tarča festival is worth a look. A medieval fair held in the town of Vidoško, it features archaelogical displays, dance performances and mock fights between costumed performers.

Bosnia by Ivan Lovrenović
Bosnia and Herzegovina: The Bradt Travel Guide by Tim Clancy
The Bosnia List: A Memoir of War, Exile, and Return by Kenan Trebincevic and Susan Shapiro
Bosnia in Limbo: Testimonies from the Drina River by Borja Lasheras

Bosnian cuisine bears many of the hallmarks of Balkan culinary traditions, as well as incorporating influences from Mediterranean and Middle Eastern cuisines. Ćevapi, which is a sausage made from grilled minced meat, is the most popular street in Bosnia and Herzegovina, and is generally served with pita bread, chopped onions and sour cream. A common accompaniment to many meals in Bosnia and Herzegovina is ajvar, a relish made from red peppers. Stews feature prominently in Bosnian cooking, including djuvec (an oven-baked stew made with onion, tomatoes, eggplant, and meat such as chicken or lamb) and begova čorba (a slow-cooked chicken and vegetable stew). Sweeter offerings include tufahija, which is poached apples stuffed with walnuts, and baklava, which is a layers of filo pastry filled with chopped nuts and honey.

Generally speaking, Bosnia and Herzegovina is safe to travel in, though always exercise common sense while travelling. Be advised however that land mines and unexploded ordanance is an occasional hazard, especially in more remote areas in the mountains and the country. 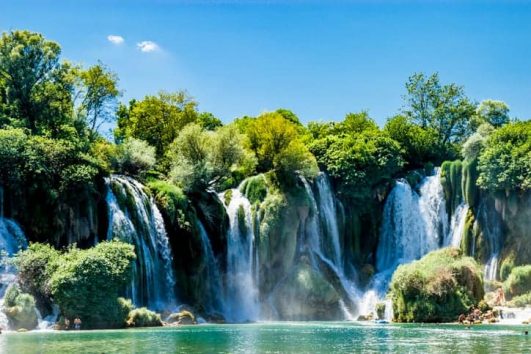 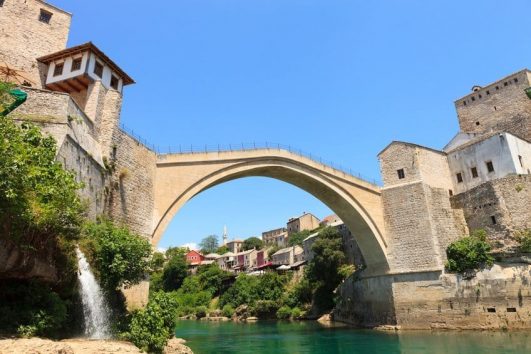 Stari Most bridge, the iconic 16th-century bridge spanning the river Neretva of the city of Mostar. 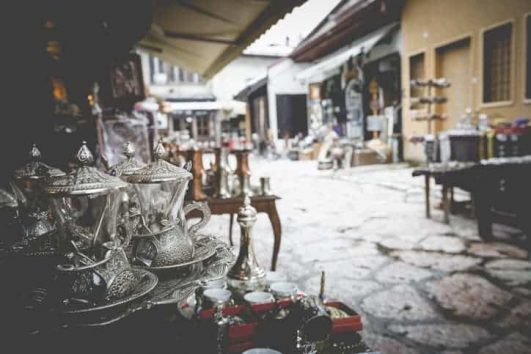 Baščaršija, the oldest bazaar in Sarajevo and the cultural heart of the city.

What time zone is Bosnia and Herzegovina in?

Is tipping customary in Bosnia and Herzegovina?

If you’re on an Odyssey tour, we take care of tipping so you don’t need to give it a second thought. However, in your free time, or if travelling independently, it’s essential that you tip an appropriate amount for services. Tipping is not obligatory in Bosnia and Herzegovina, though it is always appreciated. It is fairly common to round up the bill for taxis and bar services, while in upscale restaurants a 10% tip can be left if you feel particularly pleased with the sevice.

Wifi is widely available in Bosnia and Herzegovina, and should be freely accessible in most hotels, cafes and restaurants.

Can I use my mobile/cell phone while in Bosnia and Herzegovina?

Check with your cell phone provider to see whether you’re able to make calls and use data while in Bosnia. Many providers will allow you to pay a daily fee that allows you to make calls and check the internet while only being charged your regular rates. However, be certain to inform your provider that you’re heading overseas, because just like a bank they can turn off your service as a result of unusual activity.

External articles to assist you on your visit to Bosnia & Herzegovina