The West African country of Benin has much to offer the curious traveller looking for something different. Benin is the birthplace of the voodoo religion, a complex and fascinating religion very different to the Hollywood stereotypes. The country also has a tragic colonial history: the capital city, Porto Novo, was established by the Portuguese as a slaving port, and today is home to Portuguese and French colonial buildings. Outside the cities, Benin is home to one of Africa’s best nature reserves, brimming with magestic flora and fauna and a diverse array of landscapes, ranging from the savanna of north Benin to the beach paradise of the Atlantic Coast. If you’re interested in getting of the beaten path on your next vacation, join Odyssey Traveller and uncover one of the most underrated African countries. 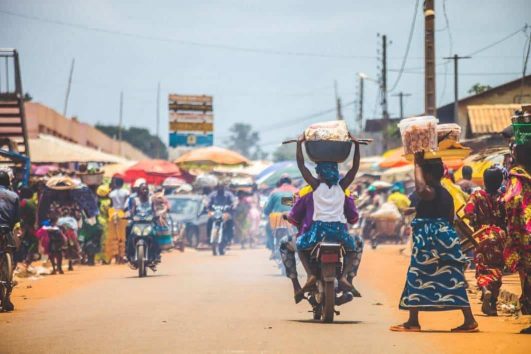 This small group tour for couples and solo travelers concentrates on the history, culture and wildlife of coastal Central Africa. Meet the friendly local people and come to a greater understanding of just what has made them what they are today. 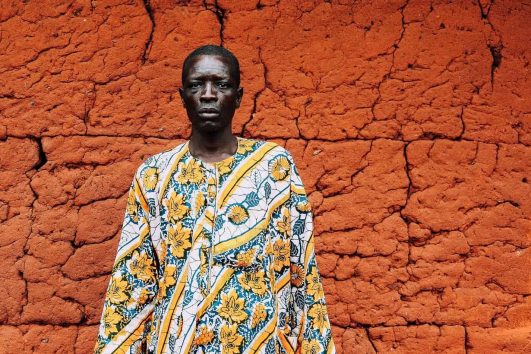 Portuguese in Africa: The Definitive Guide

Odyssey travels by coach and occasionally uses local transport, including trains and ferries. Specifics are always outlined in your tour itinerary. Bus routes connect the main cities in Benin, though services to more isolated areas may be limited. Bush taxis are commonly found in the cities and towns of Benin, though costs and safety standards can vary vehicle by vehicle. Train services are largely limited to a single line that runs between Cotonou and Parakou.

Benin is a small, narrow country that covers an area of 11,622 square km. Marshes and lagoons characterise the coastal areas to the south, while wooded savannah makes up much of the country’s central area. Most of the country is flat, apart from mountains in the northwest of the country.

Benin has a tropical climate with high year-round temperatures and humid conditions. Precipitation can be high during the rainy season, so depending on when you intend to travel, check the weather reports and dress accordingly.

Royal Palaces of Abomey, which stand as the last physical remains of the once mighty Kingdom of Dahomey
W-Arly-Pendjari Complex, one of the largest stretches of terrestrial and aquatic ecosystems in West Africa, and home to the largest population of elephants in West Africa.

Many of the unique traditions, customs and beliefs of Benin’s people are preserved through the country’s many festivals and events. Perhaps the most important day of the year in Benin is Voodoo Day. Held on January 10th every year, it is a celebration of the West African Voodoo religion, with the occasion marked with music, dance performances and elaborate religious rituals. The Yoruba people in the south of the country hold many colourful festivals to celebrate their own cultural traditions, including the Gelede Festival, whereby thanks are given to the mothers of the community and masked men stage comical performances and festive dances. Wrapping up the year is the International Festival of Dahomean Cultures. Running over 10 days in December, it is dedicated to showcasing the cultural diversity of Benin, and features traditional songs, dances, and stories of the ancient Dahomey Kingdom.

The Kingdom of Benin, by Dominique Malaquais
The Art of Benin, by Nigel Barley
Life & Afterlife in Benin, by Alex van Gelder
Why Monkeys Live in Trees and Other Stories from Benin, by Raouf Mama

The cuisine of Benin is centred around staple crops such as corn, yams, and rice. Yams form the basis of numerous dishes, including fufu (a savoury paste made from mashed yams) and nam pilé (mashed yams served with tambo chili, onions, tomatoes, chicken consome, peanuts and beef). Similarly, corn and corn meal are the central ingredients to many recipes, including akpan (fried corn dumplings served with dipping sauce) and amiwo (tomato and corn maize dough served with peppers, onions and diced tomatoes). Rich, flavoursome sauces characterise Beninese cooking, with many dishes served with generous helpings of sauce, including peanut sauce and spiced tomato sauce. Beverages popularly consumed in Benin include choukachou (millet beer) and sobadi (a liqueur made from palm wine).

As of writing, smartraveller.gov.au advises travellers to exercise a degree of caution when travelling through Benin, and in particular avoid travelling to W National Park or the Mékrou and Djona hunting zones due to potential violence and banditry. Crime is a problem in Benin, while outbreaks of Yellow Fever do occur, so you will need a valid Yellow Fever Vaccination Certificate to enter Benin.

Whenever you travel overseas, it’s always wise to take an appropriate travel adaptor. The electricity supply in Benin runs at 220V and 50Hz. Benin uses the Type E electric plug, so make sure you have the right travel adaptor with you. 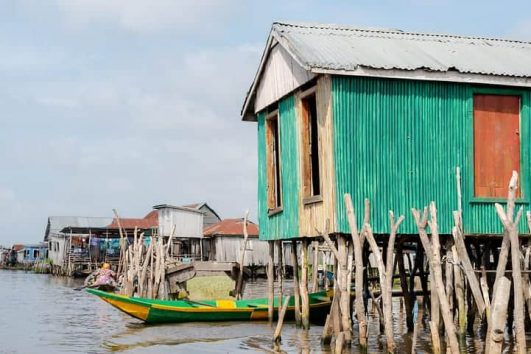 Lake Nokoue and the Ganvie lake village, near Cotonou. With a population of around 20,000 people, it is probably the largest lake village in Africa. 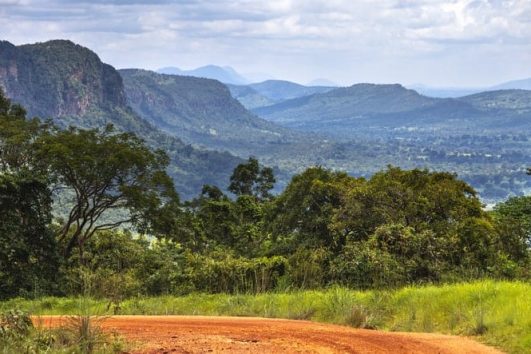 Parc National de la Pendjari, home to some of the last populations of big game animals in West Africa such as African forest elephants and West African lions. 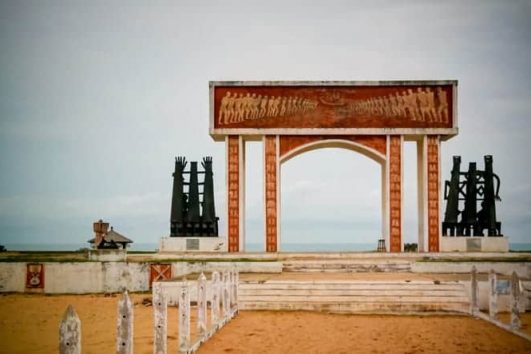 The Door of No Return

The Door of No Return, the striking memorial to the victims of the slave trade in Ouidah.

Is tipping customary in Benin?

If you’re on an Odyssey tour, we take care of tipping so you don’t need to give it a second thought. However, in your free time, or if travelling independently, it’s essential that you tip an appropriate amount for services. Tipping is not customary in Benin, although restaurants are a general exception. A tip of around 10% is appropriate for upscale restaurants, while in smaller establishments, it is polite to round up the bill.

Can I use my mobile/cell phone while in Benin?

Check with your cell phone provider to see whether you’re able to make calls and use data while in Benin. Many providers will allow you to pay a daily fee that allows you to make calls and check the internet while only being charged your regular rates. However, be certain to inform your provider that you’re heading overseas, because just like a bank they can turn off your service as a result of unusual activity.

External articles to assist you on your visit to Benin:

The voodoo priests, kings and ghosts of Benin.

Story of Cities No. 5: Benin City, the mighty medieval capital now gone without a trace.