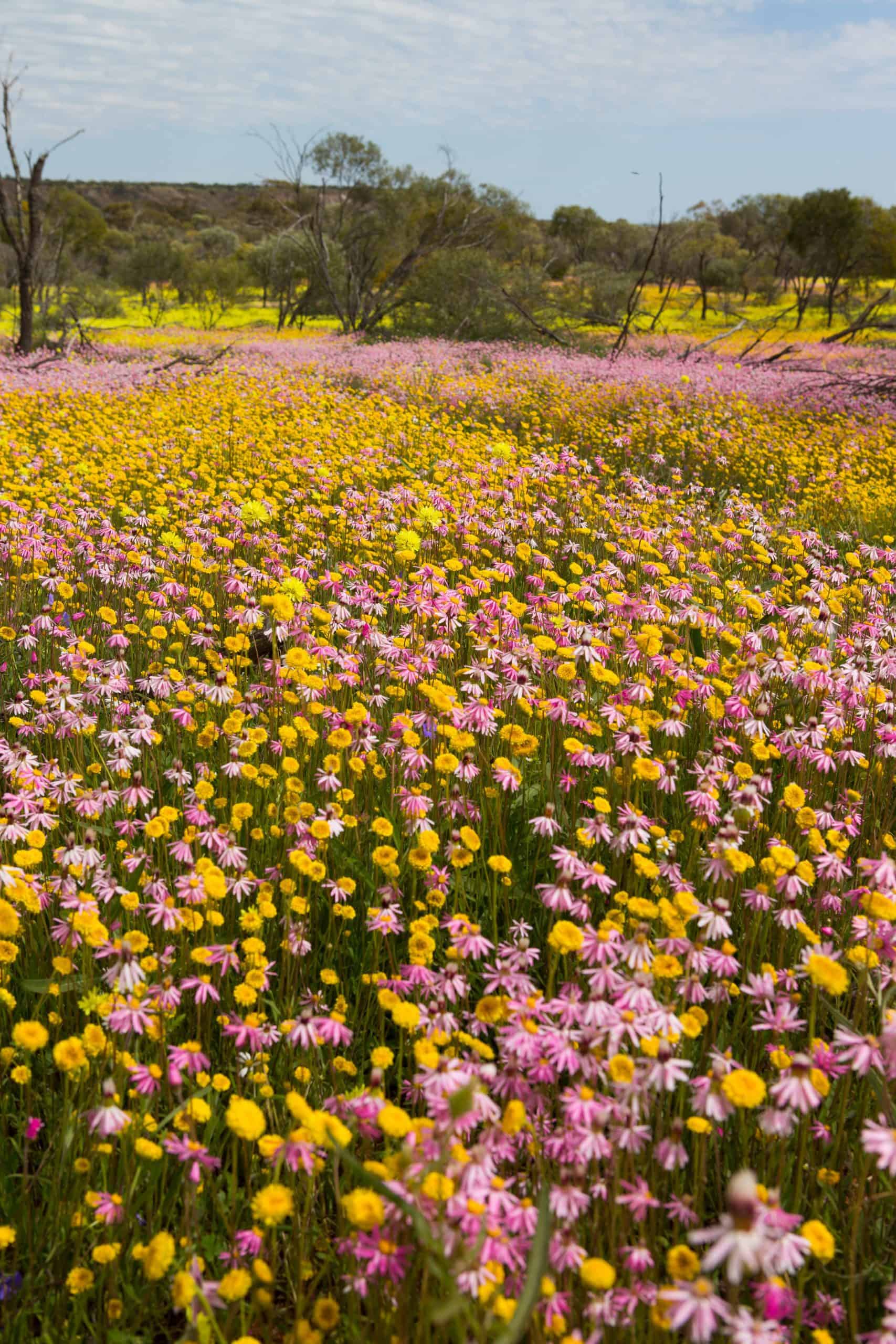 Wildflower Way is the easternmost route of Western Australia’s Wildflower Country, which runs from the wheatfields of Moora in the south to Dalwallinu in the east, and from Mullewa in the north to Green Head and Geraldton in the west. Wildflower Way itself runs 309 kilometres from Dalwallinu, north of Perth, going north and west to the coast of Geraldton, covering numerous farming towns and 21 meaningful sites developed to educate travellers. The sites are clearly sign-posted and cared for by a collective of nine local governments in Western Australia. See the map of this beautiful, bloom-covered route by clicking this link.

The local governments of Western Australia which care for the trail provide a map of the Wildflower Way online, where you can conveniently pick and mix the sites on a self-guided tour.

There are also plenty of walking trails taking you on the wildflower trail, closer to see the colourful wildflower meadow and native plants and orchids of the region. We’ve previously prepared an article discussing the unique species of wildflowers found in Western Australia, such as the donkey orchid which can be found in other parts of Australia, and which in Western Australia grows in granite outcrop. You will also be able to find the beautiful wreath flower, a low-growing bloom growing in the Wheatbelt region. (“Wheatbelt” is a term used to describe one of the nine regions of Western Australia which was converted to agricultural lands during colonisation.)

The wildflower trails showcasing Western Australia wildflowers are just the beginning, as Western Australia also has reserves and national parks with endemic animal species, such as the honey possum which calls Lesueur National Park its home. The parks are also a great space to regularly spot kangaroo and several species of birds.

There are several accommodation options for your tour of Wildflower Way in spring, and you can find a caravan park to sit down for a picnic and meet fellow travellers and wildflower enthusiasts and wildflower lovers exploring the trail on their trip. Beyond Wildflower Country, you can go on a drive to see the beaches and taste the wine of the seaside town of Margaret River.

If you’d like to experience the Wildflower Way firsthand, join Odyssey Traveller on a wildflower adventure with our Wildflowers Tour of Western Australia this spring.

Our guided tour of the wildflower trail focuses on the Australia’s south west region, particularly the wheatbelt which is home to species unique to the region. Our tour in the south west joins the Wildflower Way, joining at Mullewa and making stops at 15 spots on the way to Wubin. After this, our wildflower tour heads west into the outback, stopping at the Avon Valley centre of Merriden, and the ‘wild west’ town of Kalgoorlie, before heading to the wildflower hotspot of the south west. Odyssey Traveller conducts educational tours focused on history, culture, and architecture, and has been serving global travellers since 1983. Our tour costs are inclusive of all entrances, tipping, and majority of meals.

External articles to assist you on your visit to the Wildflower Way and Western Australia: