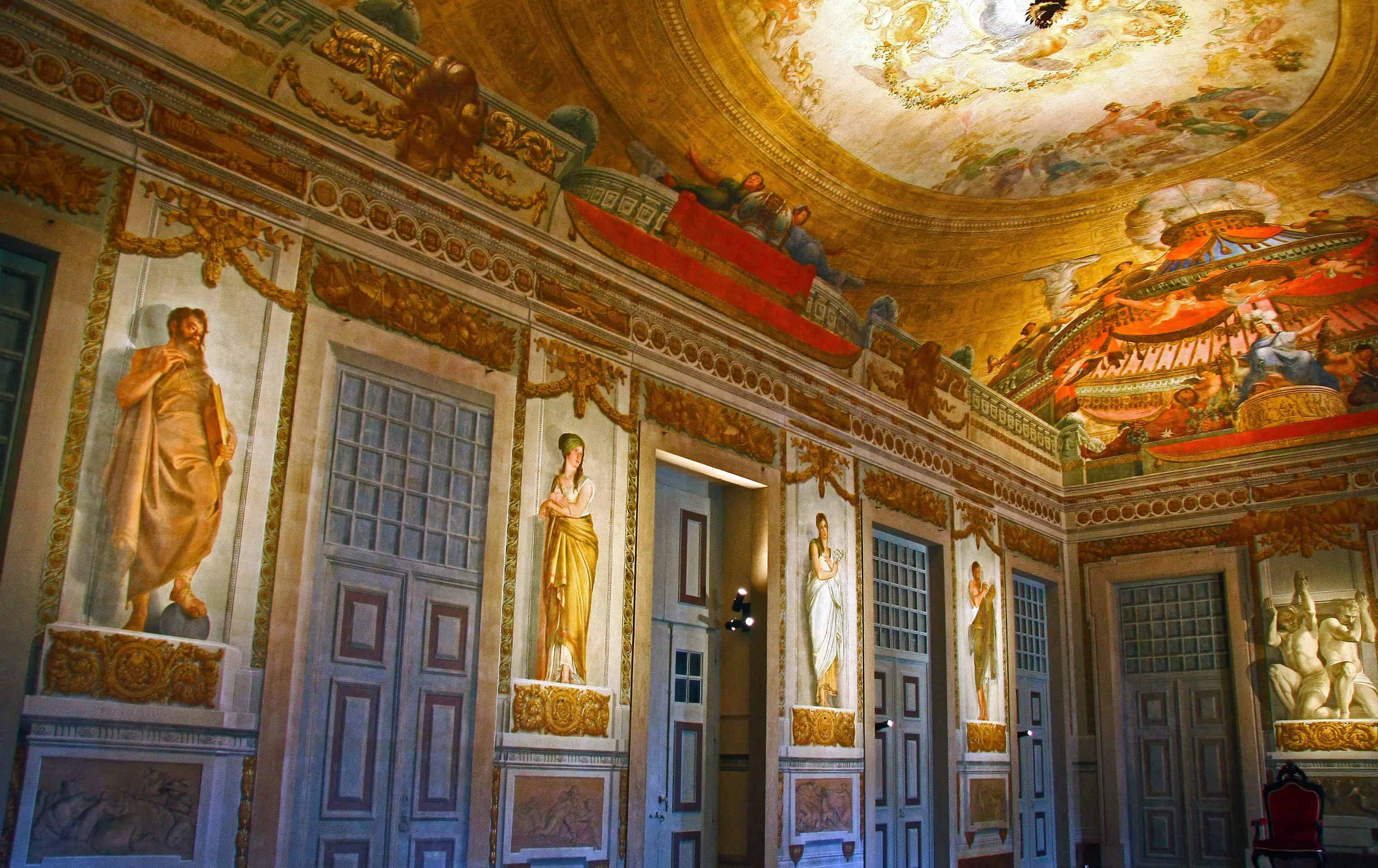 A forty-minute drive from Lisbon, you will find the town of Mafra near the west coast of Portugal. The town is known for the landmark that dominates it, the opulent Palácio Nacional de Mafra (Mafra National Palace), a Baroque masterpiece that was designated a UNESCO World Heritage Site in 2019. The beautiful palace complex includes the king’s and queen’s palaces, a royal chapel, a monastery and an impressive library. The buildings are surrounded by magnificent gardens and a royal hunting park known as Tapada.

The History of Mafra

The story of Mafra is intertwined with the story of the Mafra National Palace which begins in early 1711. At this time, the king, King John V, had been married to his wife, Maria Anna of Austria, for two years and the couple had failed to produce a heir. King John met with Franciscan Cardinal Nuno da Cunha e Ataide and lamented about the problem. The cardinal told him if King John promised God he would build a Franciscan convent in Mafra, God would grant him an heir. John promised if Maria Anna fell pregnant before the end of that year, he would build the convent. Later that year, Maria Anna did fall pregnant with the couple’s first child, giving birth in December, 1711.

Construction of the convent began in 1717 and the original plans were for a modest church convent suitable for 100 friars. However, in the following years, as gold flowed into Portugal from colonies of Brazil and Maranhao, the plans for the convent started to evolve. Instead, John opted to build a lavish and sumptuous palace, designed by Johann Friedrich Ludwig, a German architect. By 1729, around 20,000 people were involved in the building process and John decreed that all the inhabitants of Mafra and the neighbouring village of Ericeira must work on the construction of the palace. The majority of the palace was completed the following year and the basilica was consecrated but it would be another two decades or so before the palace was completed.

In 1726, a Swiss nobleman by the name of Charles de Merveilleux noted that ‘King John has decided to build a second Escorial’, referring to the historical residence of the King of Spain, in the town of San Lorenzo de El Escorial, Spain. Initially intended to be the fulfillment of a religious promise, the Mafra National Palace, paid for in Brazilian gold, became a symbol of monarchical wealth and power.

On 5 October 1910, during the Portuguese Republican Revolution, King Manuel II fled the coup in Lisbon and stayed overnight in the palace before escaping to Gibraltar from Ericeira.

What to See in Mafra

The Palace of Mafra is the absolute must-visit of Mafra and the most important monument in a tour of Mafra. Made of limestone and marble, the palace covers an area of almost 4 sq km encompassing 1,200 rooms and two majestic bell towers, which house the world’s largest collection of bells. The two turrets of the palace are linked by 232-metre long gallery, which is in fact Europe’s largest palatial corridor. There is a long barrel-vaulted library that is home to around 36,000 book volumes, many of which are from the 15th to 18th century and were handbound by the monks. The palace features 29 inner yards and courtyards. The palace, including the library and basilica, are open for the public to explore.

Around the palace is the Tapada Nacional de Mafra, built as a royal hunting ground by King John V. Today, the park is a beautiful pocket of land, teeming with Eucalyptus, cork and pine trees and full of wildlife. You will find red deer, foxes, badgers, eagles and wild boars in the park. The park is enclosed by a 21 km original wall and there are multiple trails within the park for hikers and a lovely guesthouse on site. For those interested in activities other than hiking, there is archery, horse-riding and wagon rides on offer.

Four km northwest of Mafra is the fascinating Aldeia típica de Jose Franco. This is a miniature craft village full of windmills, watermills and shops that acts as an open air museum of a typical village in the region. Jose Franco was an accomplished sculptor  and visiting the tiny village provides a chance to step back in time to the 20th century and see some of the history of Portugal in a special way.

A unique site in Mafra is the Iberian Wolf Recovery Centre, near Malveira. Home to around 13 wolves, the centre aims to boost the endangered Iberian wolf population by giving a safe shelter in their natural habitat. Many of the current wolves were rescued from illegal captivity. The centre is run by volunteers and guided tours are available to visitors, though it is not guaranteed that you will catch sight of the wolves.

If you are making a trip from Lisbon to Mafra, it is also worth visiting the traditional fishing village of Ericeira, which is just ten minutes from Mafra. With beautiful beaches and spectacular seaside views, it is a popular weekend destination for Lisbon locals. The Miradouro Ribeira d’Ilhas viewpoint provides incomparable views of the Atlantic coastline.

Odyssey visits Mafra and its inimitable palace in our Lisbon and Barcelona group tour. The tour also visits Ericeira, the charming village of Azenhas do Mar with its whitewashed houses and Cabo da Roca, the westernmost point of mainland Europe. For further information of our tours to Portugal, please look at our Portugal profile.