Living at Versailles: The Definitive Guide

The Political and Social Climate at the Palace

The Political and Social Climate at the Palace of Versailles

The Palace of Versailles was a place of total luxury from the time of Louis XIV’s initial plans to the end of the French monarchy with Louis XVI.  The political and social climate became entirely unique to the palace.  There were two significant political shifts that were founded at Versailles: first was to Louis XIV’s absolute power, and the second was to democracy after the French Revolution (McPhee 2017). Louis XIV was an impressionable young king who was scarred by the memory of the Fronde civil wars between the provincial aristocracies.  He decided to build Versailles to signify his absolute power as king and thereby reduce the powers of the French nobles.  To further emphasise his power, he created a lengthy and detailed list of etiquette rules to ensure that the nobles were kept in line.  As indicated in Versailles: Landscape of Power & Pleasure, “Louis XIV had conceived Versailles as a means of keeping the high nobility unified, delocalised, under his surveillance, in his debt – and happy” (Jones 2018, p. 124).  These rules dictated how each noble spent his time in court, how they dressed, how they sat, and how they acted in order to increase their standing with the king.  These rules for the courtiers also remained throughout Louis XV and Louis XVI’s reigns, until French citizens rebelled and overthrew the monarchy.  This article will provide a brief look at what it meant to be living at Versailles, for both the king and the thousands of courtiers living there.  It will also outline some of the ways in which these rules of etiquette enforced the king’s power. 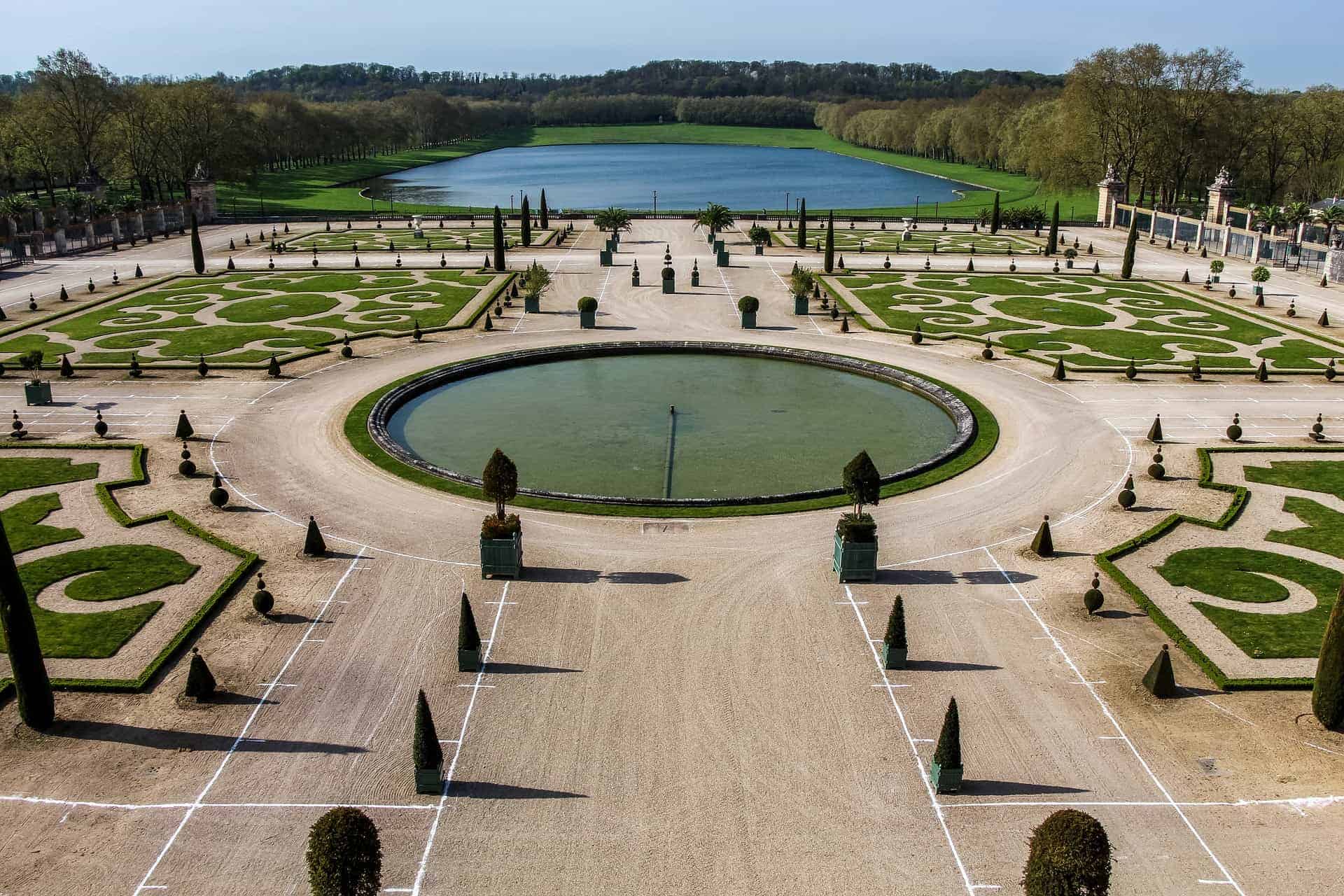 From the time that Louis XIV permanently moved to Versailles and made it the administrative and political capital in 1682, he developed a strict schedule of events for himself, which would reflect on the courtiers’ schedules. It was so precise that any noble with a watch could know exactly where and what he was doing. His daily itinerary looked like this:

Louis XIV believed that he owed himself completely to the public and made his everyday existence a spectacle.  Courtiers were expected to adapt their schedules so that they were in line with the king’s.  And so, courtiers plotted to increase their social standing so that they could be present at the morning and bedtime ceremonies.  Many courtiers attempted to mimic the king’s schedule so as to attempt to speak with him.  At the time, one of the worst things that a courtier could do was be absent from daily Versailles life.  In essence, absence was a punishable offence, because the king would not grant any favours for people he did not recognise as spending enough time immersed in Versailles schedules.  In fact, according to the Duke Saint-Simon’s first-hand accounts, it was a crushing blow when the king responded to favours with ‘He is a man I never see’ (Jones 2018, p.191). There was an extensive hierarchy of nobles at the court, all of whom were constantly trying to climb the ladder to the highest platforms next to the king.  The hierarchy was a power play that king Louis XIV designed to keep the nobles distracted from conspiring against him.

Attending the daily ceremonies and becoming close to the king were of the utmost importance to the nobles.  They did everything in their power to raise their standing so that they could be invited to the most intimate ceremonies and be granted the opportunity to connect with the king and ask for support and favours.  All of the rules of etiquette that got a noble noticed by the king were politically motivated and were intrinsically tied to their social identity (Jones 2018, p.98), as were the courtier’s housing, fashion, and manners.

Versailles was made into such a huge structure so that there was enough room to accommodate a large number of ministers and noblemen of the court.  Where you lived was another indicator of your social standing.  All vied for the ability to live at the palace because the closer you were to the king, the greater chance you had for notoriety and riches.  On the lowest rung of the nobility ladder were the ‘galopers’, who travelled to Versailles from Paris (Jones 2018, p. 112) by carriage as frequently as they could.  Next highest were those who moved into private homes or hotels in Versailles.  They were able to spend much of each day at the palace, but were not important enough to live in one of the 700 rooms of the palace.  Those who lived at the palace were the most highly regarded by the king.  Then, there was a hierarchy among those nobles who were allowed to stay at the palace depending on how close your room was to the king’s.

Even though the king gave lodging to many of the courtiers, he did not provide them with food (Jones 2048, p. 113). Catering was brought in and high-standing nobles often provided food for the lower nobles at a price or as part of power relationship building among the courtiers.  These mealtime relations were essential to the courtiers’ daily lives and networking to improve their standing.

Fashion was one of the biggest political ploys of the court.  Fashion demonstrated a courtier’s wealth while simultaneously stripping it away (Barringer 2014).  The time was dominated by Baroque style clothing, with rich dark fabrics, made of silk or velvet and with ornate decoration, which were a rarity that cost a large amount.   Often these outfits were as expensive as buying a Ferrarri in the present day (Worsely 2016).  Not only were outfits expensive, but it was common practice to only wear an outfit once.  Additionally, women were expected to change three or four times throughout the day (Jones 2018, p.113).  While the palace remained open to all visitors, there was a strict dress code for all who entered the palace, namely visitors had to have both a hat and a sword.  These items were available at the door for rental at a steep price.  Many courtiers went bankrupt from the expensive clothing requirements of the king.  The king would regularly pay to bail out the bankrupt nobles, which forced them to be further indebted to Louis XIV.

There were many unusual protocols for courtiers to follow when at Versailles.  Following the proper etiquette was like a dance with specific steps to ensure that you fell in line with the rest of the court, didn’t step on the wrong toes, or spin out of place.  All nobles needed to know how to dance, both in the figurative and literal sense. From his youth, Louis XIV had a love for dance, specifically for ballet.  Strong dancers impressed him and it was all but a requirement of the nobles to study ballet.  This was evident as over 200 dance schools were established in the 1660s to train nobles (Schmid 2017).  In addition to dancing, courtiers developed a very special way of walking so as to not step on each other’s dresses.  Other etiquette rules included:

There were many other intricacies that pervaded the etiquette at Versailles court.  Every one of them were designed for Louis XIV to maintain soft power over his court and ensure that they were preoccupied with abiding by the court rules so as to not plot against him.  These rules continued into Louis XV’s and Louis XVI’s courts, but to a somewhat lesser extent.  The rules adapted with each successor and so too did the power dynamic.

Louis XV and Louis XVI were also said to have followed the schedule that Louis XIV kept.  However, they did not hold the same mindset to their predecessor.  They did not believe that they owed their lives to the public, found the ceremonies of everyday tasks were confining and unnecessary, and so both excused themselves from as many of the rituals as possible.  This upset the courtiers, as the times that were set for approaching the king were no longer available (Château de Versailles).  This growing discontent from as far back as Louis XV erupted during Louix XVI’s time, especially with his Queen’s outright and vocal protest of the daily ceremonies.

Louis XVI and his Queen, Marie Antoinette, were both very fond of having a personal life separate from the courts.  Marie Antoinette in particular, struggled to adapt to the long list of ceremonies and etiquette expected of her from the precedent set by Louis XIV’s time (Château de Versailles).  She lacked passion for the daily ceremonies, but rather focused her attentions on party planning to appease the court.  She threw extravagant parties weekly and put on plays two or three times per week. Still, the strong shift toward greater private life for the royal family affected a change in fashion.

Marie Antoinette revolutionized style by her resistance to court formalities.  Style became looser and many articles of clothing that were previously only worn in private, became appropriate fashion to be worn in public.  Marie Antoinette was an influential force in moving the French courts to the Rococo style, complete with pastel colours, ruffles, bows and lace (Del Hierro 2016).  Still, the price tag for each piece remained high due to the expensive lace that was popular.  Additionally, the expectation that outfits not be repeated survived from Louis XIV’s reign.  The lavish parties and attire required for them, became a primary example for the French revolutionists of the frivolity of the monarchy.

In its heyday, life at Versailles was a mix of power politics, hierarchy, etiquette and fashion.  Courtiers lived in their own bubble of luxury and were focused on pleasing the king and following his rules.  Louis XIV’s social structure and etiquette practices were both the doing and undoing of Versailles.  They established the power that reduced fighting among the nobility and replaced it with competition for his attention and his absolute monarchy.  They also ran up France’s expenses to the point of bankruptcy, which would give cause to the rebellion that collapsed the French monarchy for good.

By this time the cost of running Versailles and its lush parties cost 10 percent of annual tax revenues tax collected by the crown. (McPhee 2017).  While the French citizens struggled to pay their tax, they saw the monarchs spend it freely on clothing and events.  On top of this, the French government was supporting the colonists with the American War of Independence.  These two expenses were primary causes for France’s bankruptcy.  In 1789, Louis XVI conceded to holding a meeting of the Estates General to discuss further raising taxes (BBC 2014). This three-part legislative body (Clergy, Nobles, and Commons) had not been called together since 1614, and sought to create a Declaration of the Rights of Man.  However, in the course of the meeting, the king was hesitant to sign this Declaration, which would dissolve noble power.  This hesitation brought about the storming of Bastille and the French Revolution that meant the end to the royals in Versailles.

This article will be published second in a series on Versailles: its construction, its heyday, and its conservation.  Check out our article Constructing Versailles to find out how the palace was established; and stay tuned to find out more about its role after the French Revolution and how it is being conserved.