One of Portugal’s most unspoilt medieval towns, Evora is a UNESCO World Heritage site just an hour and a half from Lisbon, the capital of Portugal’s south-central Alentejo region. The town is like an open air museum and inside its 14th century walls you will find a 13th century cathedral, a 15th century church, Moorish buildings, well-maintained cobbled streets and the remains of a Roman temple. Despite being a place known for its historical and religious architecture, Evora is also a lively and bustling university town with plenty of restaurants, bars and cafes to explore, farmers’ markets, wine cellars offering tasting and live music. With a compact centre and far fewer tourists than some of Portugal’s more popular destinations, Evora is the perfect place to spend a couple of days soaking up the incredible monuments and sampling Alentejan cuisine.

Evora’s history dates back more than five millennia when the Celtici, a tribal confederacy, south of the Lusitanians (and of Tagus river), made the town their regional capital. Evora comes from the Celtic word Ebora meaning ‘of the yew trees’. The town was conquered by the Romans in 57 BC who built walls around the centre and parts of these walls and the ruins of Roman baths date back to this time. The city was considered important because of its geographical position, lying at the junction of several different routes and it developed into a flourishing city. The Roman temple with its remaining iconic Corinthian columns was likely built in the 1st century in honour of Emperor Augustus.

Evora came under the rule of the Visgothic king Leovigild in 584. This became a period of decline for the town and it was conquered by the Moors, in 712, who renamed it Jabura. It remained under Moorish rule until 1166 and during this time became something of an agricultural centre with a fortress and a mosque. Traces of the Moorish rule can still be felt today in the architecture of the town.

A surprise attack by Portuguese warrior Gerald the Fearless saw the town come under the rule of Portuguese Afonso I in 1166 and it quickly flourished as one of Portugal’s most happening cities. By the 15th and 16th century the kings of Portugal began residing regularly in Evora. On 1559 the university was founded in Evora by the Jesuits and it became a centre for humanities in Portugal. However, in the 18th century the Jesuits were expelled from Portugal and the university closed in 1759 and did not reopen again until the 1970s.

The historic centre of the city was designated a heritage city by UNESCO in 1986 and today, it is primarily an agricultural trade centre. Tourism plays a significant role in the city’s economy.

The Templo Romano, also known as the Temple Diane, is right in the centre of the old city. Once part of the Roman Forum, it was built in the first or second century and today fourteen granite Corinthian columns capped with Estremoz marble remain. The columns are so well preserved because the temple was reportedly walled up in the Middle Ages, forming part of a small slaughterhouse and protecting part of the temple. These days there is a little square in front of the temple where you can sit and enjoy a glass of Alentejo wine while admiring the view.

Se Cathedral is the ancient religious seat of Portugal and the biggest medieval cathedral in the country, built between 1186 and 1250. It is a fortress-like structure, completely made from granite and known for its impressive cloisters and the fascinating Religious Art Museum. The 14th century cloisters feature statues of the Evangelists in each corner and are a great example of Gothic architectural style. The museum showcases some fabulous ecclesiastical riches and sacred art, including a revolving jewelled reliquary that contains a fragment of the true cross. The roof of the cathedral provides panoramic views over Evora. The whole experience will transport you back to medieval times as you wander through the arches of the building and admire the cathedral’s public gardens. 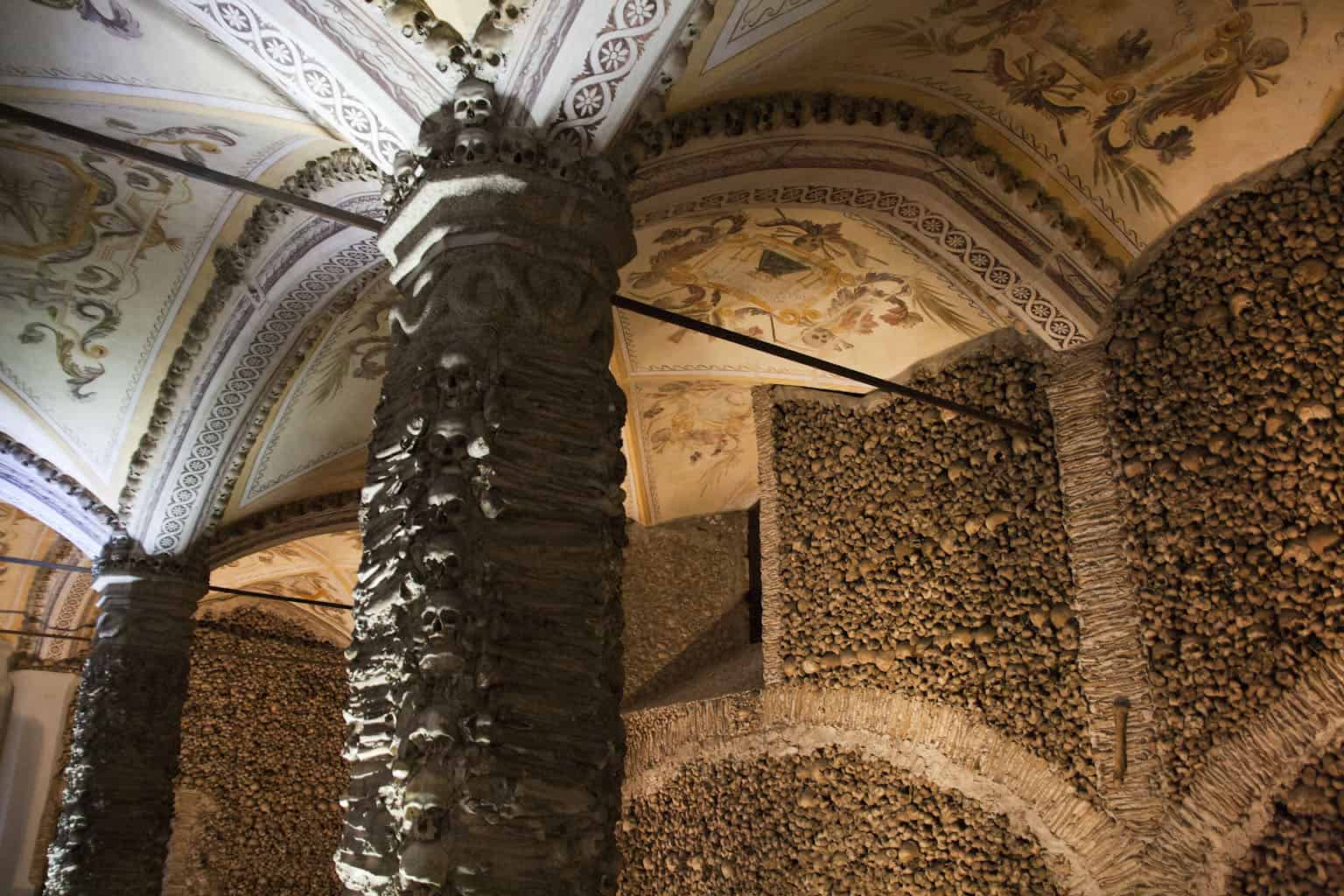 Capela dos Ossos is one of the most well-known and unique monuments in Evora. The name translates to the ‘Chapel of Bones’, which is a fairly accurate translation. Inside this small interior chapel, which stands next to the entrance of the Church of St. Francis, you will find the walls lined with the bones and skulls of some 5000 people. Built in the sixteenth century by a Franciscan friar as a memento mori (reminder of death), a warning above the chapel reads ‘We bones you see in this poor state for you and yours do sit and wait’. During the time it was built, the graveyards in Evora were overcrowded so bones were exhumed to make way for new bodies to be buried. The bones are arranged and decorated in a way that is both beautiful and macabre. Today, it is both chilling and spellbinding but definitely a fascinating experience nonetheless.

The Termas Romanas or Roman Baths of Evora were only discovered in 1986, under the Câmara Municipal (town hall). The baths feature a beautifully-preserved 9m-diameter circular steam bath (known as a laconicum) and the complex also includes an open-air swimming pool that was discovered in 1994.

Just 13km outside of Evora (or half an hour in the car) you will find one of Portugal’s most extraordinary sights: the Iberian peninsula’s largest stone circle. Here you will find 92 stones aligned for 70m down a hill. They are thought to have been placed here in phases, the first one around seven thousand years ago. They are said to have been erected in a horseshoe shape as a site of fertility rituals. Today they are still a powerful site to behold and a walk through the stone circles impresses on one the majesty of neolithic monuments.

If you are interested in visiting the magnificent walled city of Evora and seeing all it has to offer, then consider our Discover Portugal tour which spends two nights in Evora and allows you to see the Capela dos Ossos, the Se Cathedral and visit a local winery. Feel free to check out our other tours to Portugal as well.