Highlights of Bhutan: The Nalakhar Tshechu 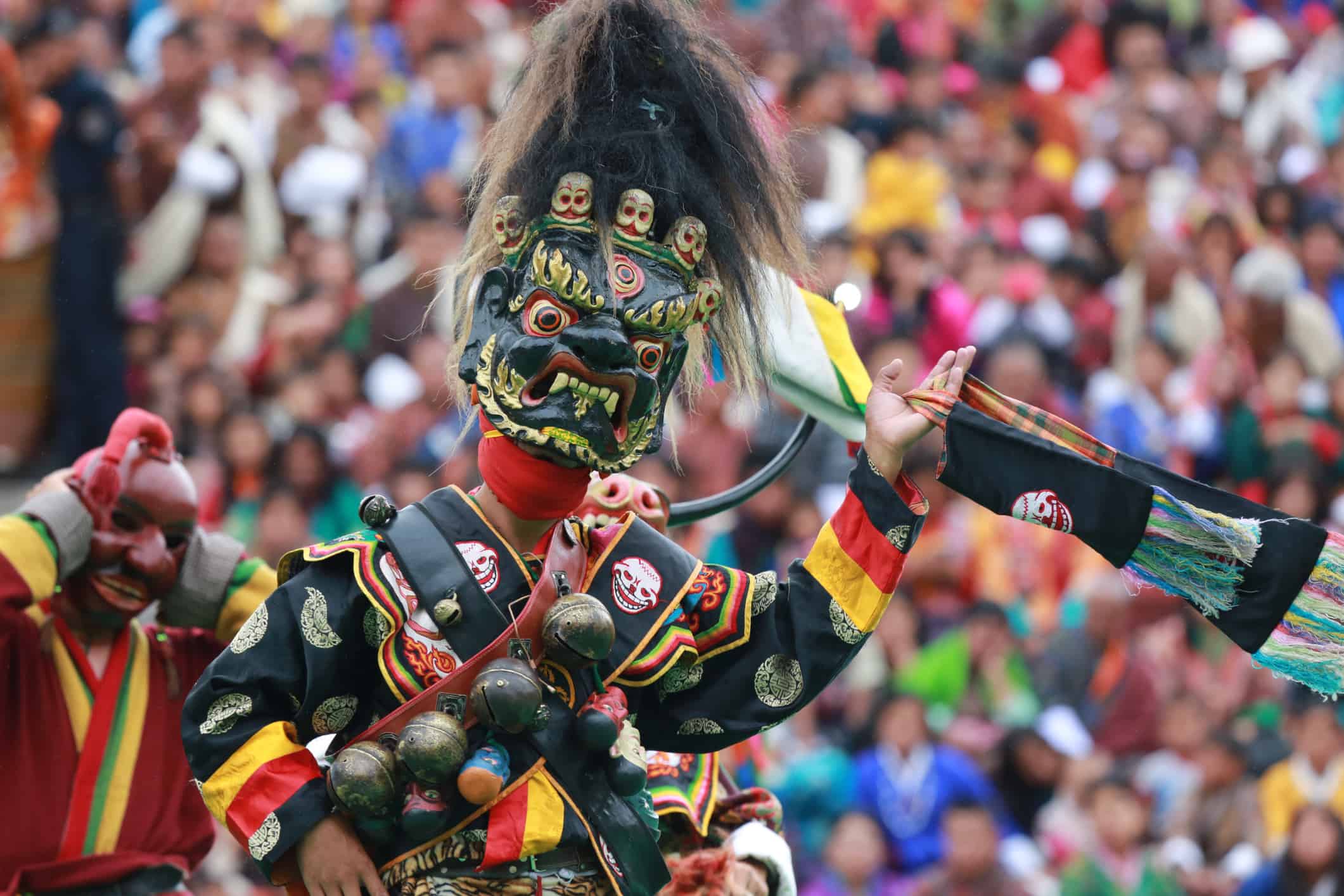 The Nalakhar Tshechu festival runs for three days in the Nalakhar village in Bumthang, the religious heartland of Bhutan. The celebration is part of the national Tshechu, one of Tibet’s biggest religious festivals. The festival runs for three days every year, and is celebrated in religious sites throughout the country. Tshechu literally translates as ‘the tenth day’, so-called because the the religious festival is held  on the tenth day of the month of Guru Rinpoche’s birthday.

The celebrations are held in fortresses (Dzongs) and monasteries. In a small village like Nalakhar, hundreds of people from remote farmsteads surrounding the village will pour into the main monastery. The scale of the occassion is made immediatly obvious by the clothes; everyone turns up in the Buddhist equivalent to their ‘Sunday best’. which is naturally a far more colorful outfit.  The whole country will then dance and celebrate together. The festivities are the integral part of the Tshechu prayer ritual, which hopes for happiness, prosperity and good harvests throughout the country.

Though the carnival atmosphere may just seem like one big celebration, the Tshechu festival is of enormous religious and spiritual significance. Tshechu is deeply ingrained within the Buddhist tradition. The festival is rooted in the experiences of Guru Rinpoche, also known as Padmasambhava, or the Second Buddha of Bhutan. According to legend, Guru Rinchope made the journey from Tibet to Bhutan in the 8th century on the back of a tigress. Guru Rinpoche is seen as being responsible for the spread of Buddhist in the area now known as Bhutan. The Bhutanese caves and mountaintops where he meditated have since become the sight of some of the most iconic monuments to Buddhism in Asia. During his stay in the country, Guru Rinpoche used an array of dances and prayers to overwhelm the local demons and banish them from the region.

Today, this story is re-enacted through a series of highly symbolic dances. According to legend, Guru Rinpoche transformed into eight human forms, and then performed dances to defeat the local deities. These dances have evolved into the sacred Cham dances, which commemorate Guru Rinpoche’s great deeds, and are very much the highlight of the Nalakhar Tshechu festival. The dances have bold and exciting names, from ‘’Dance of the Lords of Cremation Grounds’’ to “Dance of the Terrifying Deities”, and are performed by a mix of religious monks and laymen. Monks will prepare for weeks ahead of the festival, meditating, rehearsing and engaging in prayer. On the day of the festival, all the dancers put on ornate masks and colourful masks. These masks have become an iconic feature of Bhutanese culture, and are created in the form of some of the enlightened beings throughout Buddhism. Dances are timetabled to specific festival dates, and so the whole country celebrates the same ideas at the same time.

The dances are of huge religious significance within Buddhism, and it is believed that, just as Guru Rinpoche used these dances to defeat the original demons of Bhutan, so these dance will prevent the evil deities from returning to the country today. Because of their importance, it is believed that everyone must witness a dance at least once in order to wash away their sins. This is why so many crowds throng to the festivities every year. The festival also plays a pivotal function within the Bhutanese oral tradition. From generation to generation, the celebration of the nalakhar tshechu has kept the flame of traditional Buddhist teachings alive, everywhere from remote villages to sprawling metropolises.

Thimphu, the capital of Bhutan, typically puts on the largest and most popular festivals every year, alongside the Nimalung tshechu and the Wangdue tshechu. However, the large-scale celebrations in Thimphu have often been geared up for tourists, and have drifted away from the traditional forms of Tshechu celebration. This is why the Nalakhar Tshechu festival is so perfect. Nalakhar is a remote village nestled deep in the Choekhor valley. For generations,the Nalakhar Tshechu has put on the largest regional festival, and so people from villages all over the Bumthang area will congregate in this small village. The Nalakhar Tshechu festival therefore offers a rare insight into the truly traditional celebrations, that have been passed down through Bhutanese culture for centuries.

The Nalakhar tshechu offers one of the purest insights into these emotions, sentiments and celebrations. Despite its remote setting, throngs of artisans will be selling their local wares, at a price far cheaper than the tourist sections of the larger cities. Dancers, competitions, food and drink will all compete for your interest. For an authentic insight into the culture, spirituality and beauty of Bhutan, there is not better option that to celebrate the Nalakhar Tschechu.