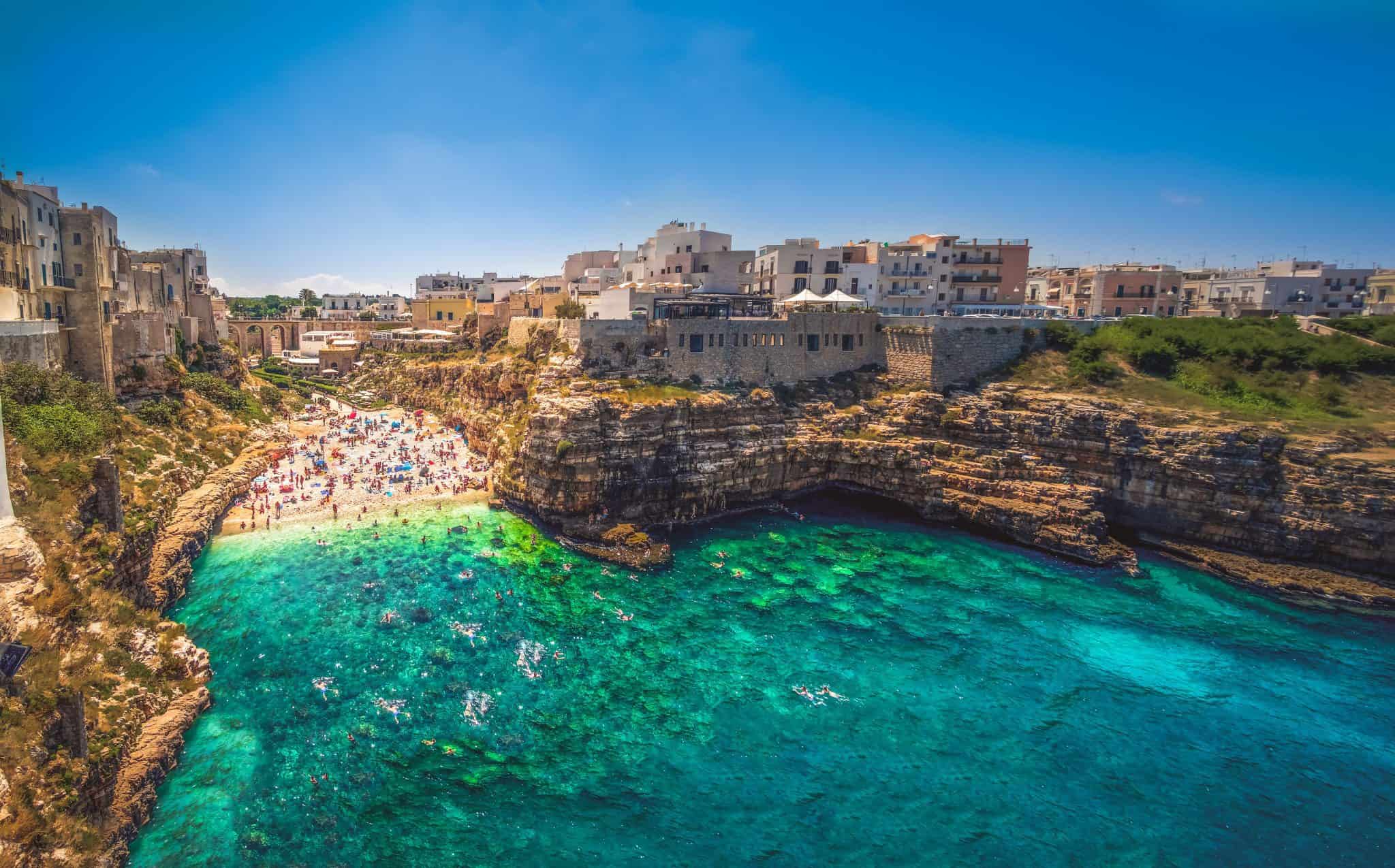 The heel of Italy’s boot, the Apulia region (Italian: Puglia) is slowly taking its place among Italy’s major destinations. With a wealth of historic towns, beautiful scenery and a much less frantic pace of life than Northern Italy, a tour of Apulia is ideal for lovers of slow travel.

Apulia’s long Ionian coastline was settled by the Ancient Greeks in the 8th century BC, with the major centre, Taras (Taranto) inhabited by refugees from Sparta. Apulia then came under Roman rule, beginning a wave of invasions – Byzantine, Lombard, Arab, Norman, Swabian, Aragonese, and Bourbon – that saw Apulia ruled by outsiders until the 19th century.

Like the rest of Southern Italy, Apulia was unified into the modern nation of  Italy in 1861. Though Southern Italy has remained underdeveloped in comparison with the north, recent interest is seeing international travellers bring prosperity to Apulia, without the crowds of other Italian tourist destinations.

The waves of invaders have shaped Apulian culture, giving it a diverse architectural heritage and a fascinating regional diversity. In remote parts of the southern Salento area, locals speak Griko, a hybrid Greek-Italian language dating back to Byzantine rule in the 9th century; while a rare dialect of French-Provençal called Faetar is spoken in towns in Foggia. Adding to the linguistic diversity of this geographically small region were refugees from Ottoman invasion of the Balkans, who continue to speak Arbëreshë, a 15th century dialect of Albanian.

Things to see in Apulia:

The many conquerors who have passed over the land here have left Apulia with a rich and diverse legacy of art and architecture. The capital city, Bari, has been a commercial centre and important trading port for millennia. Under the Romans, it was one of the most important cities on the Adriatic coast, while during the period of Byzantine rule it was a major centre of the slave trade, oriented towards the Eastern Mediterranean. But Bari’s major claim to fame came in the early middle ages, when it became the final resting place of the bones of St. Nicholas. St Nicholas’s original resting place – in modern-day Turkey – had come under Muslim rule, so a group of Bari residents went to the Middle East to bring his remains back to their city. St. Nicholas’s new resting place, the Basilica di San Nicolo, is now the focal point of Bari’s Old Town, a 12th century Romanesque masterpiece. The surrounding Bari Vecchio (Old Town) has been revitalised, and is now a hub of restaurants, cafes, and bars. Make sure to visit the Cattedrale (Cathedral), another Romanesque structure, and the Castello Svevo, built by Frederick II, the 13th century Swabian (German) ruler of Sicily and Southern Italy.

To the north of Bari, you’ll find Frederick II’s masterpiece, the Castel del Monte. A noted humanist and patron of arts and culture, Frederick II left a trail of castles, palaces, and cathedrals across Southern Italy and Sicily, but few are as magnificent as Castel del Monte, which expresses his deep interest in astronomy and geometry, and fuses elements of Arabic and Northern European design.

Head further north again and you’ll find the Gargano Peninsula, jutting into the Adriatic Sea, which is home to limestone cliffs, sparkling sea, and some of Italy’s most ancient forest. Towns here include the charming seaside ports of Vieste and Peschici, and Monte Sant’Angelo, the medieval sanctuary of St. Michael.

To the south of Bari is the Valle d’Itria, possibly the most beautiful and distinctive part of the Puglia region, a gently rolling and green countryside dotted with wineries, almond and olive groves, and distinctive trulli houses with white limestone walls and conical roofs. In a land where so much architecture was bequeathed by outsiders, the trulli are a fascinating local invention. While the historical origins of these buildings – the oldest of which date back to the 16th century – are obscure, theories suggest that they were built because feudal landlords sought to evade tax by requiring their peasants to build structures that could be easily dismantled – and thus could be hidden from the tax inspector. The best place to see trulli is probably the UNESCO World Heritage site of Alberobello town, with over 1,400 trulli on the city’s narrow streets – many of which have been converted into holiday homes, hotels, and stores.

The Valle d’Itria is not a typical valley, but a Karstic (limestone) depression. This geological phenomenon also created the beautiful limestone caves of the Castellana Grotte, an extraordinary underground landscape. The region is also home to several important medieval centres. Martina Franca was founded by refugees from Arab attacks on nearby Taranto in the 10th century, but flourished in the 14th century under the rule of Philip of Anjou, who granted tax exemptions to the town. Today, it is a well-preserved medieval centre, a maze of white buildings dominated by the baroque Palazzo Ducale. The nearby hilltop city of Ostuni, known as the ‘white city’, is widely regarded as one of southern Italy’s most beautiful cities.

South of Ostuni the landscape flattens, takes on a dry, ochre colour, and olive trees begin to dot the landscape. You’ve reached the Penisola Salentina – better known as Salento. The unofficial capital of Salento is Lecce, known as the ‘Florence of the South’ or the ‘Florence of the Baroque’. Ottoman defeat in the Battle of Lepanto brought peace back to a region that had been turbulent for centuries, and a group of artists and benefactors began to build (over forty) churches and palaces in Lecce. Lecce was blessed with a local, particularly malleable form of limestone, which allowed architects to carve in ornate, florid style. Today, Lecce’s buildings are a beautiful gold by day, then turn pink as the sun sets. The city is also home to a well preserved Roman amphitheater, dating back to the 2nd century AD, and rediscovered by workers in 1901.

The nearby port city of Otranto is also a must-see destination, most especially for the Cathedral, built by the Normans in the 11th century. The highlight of this beautiful cathedral is the floor mosaic depicting the tree of life, fusing Byzantine and Western European forms. In the rather macabre Chapel of the Martyrs, you’ll find the bones of skulls of 813 locals (executed by the Ottomans during the Siege of Otranto in 1480) peering out of glass cases.

Salento is also home to a coastline to rival the iconic Amalfi Coast: turquoise waters, rugged caves, and yellow sand beaches. Some of the best coastline can be found near the seafaring charming town of Savelletri, around laid back Santa Caterina, and in the vicinity of rugged Makò, while swimmers will also appreciate the natural swimming pool at Marina Serra. Gallipoli was the hub of the olive oil market in the 18th century, which was used by cities across Europe to provide lighting for their streets. Highlights include the stunning Byzantine cathedral, dating from the 13th century, and the enormous Baroque Santa Agata cathedral, and the beautiful and centrally located, city beach.

Most visitors to Puglia fly into Bari airport, before heading out into the countryside. Bari is also ideally placed for a day tour of the fascinating cave dwellings of Matera, in the neighbouring province of Basilicata.

You can visit Apulia as part of our 22 day Ancient History of Southern Italy and Sicily guided tour. Odyssey Traveller has been serving global travellers since 1983 with educational tours of the history, culture, and architecture of our destinations designed for mature and senior travellers. We specialise in offering small group tours between 6 and 12 people. partnering with a local tour guide at each destination to provide a relaxed and comfortable pace and atmosphere that sets us apart from larger tour groups. Tours consist of small groups of between 6 and 12 people and are cost inclusive of all entrances, tipping and majority of meals. For more information, click here, and head to this page to make a booking.

You can visit Apulia as part of our 22 day Ancient History of Southern Italy and Sicily guided tour. Odyssey Traveller has been serving global travellers since 1983 with educational tours of the history, culture, and architecture of our destinations. Odyssey specialises in offering small group tours between 6 and 23 people,  Tours are cost inclusive of all entrances, tipping and majority of meals. For more information,

External articles to assist you on your visit to Apulia and Southern Italy: