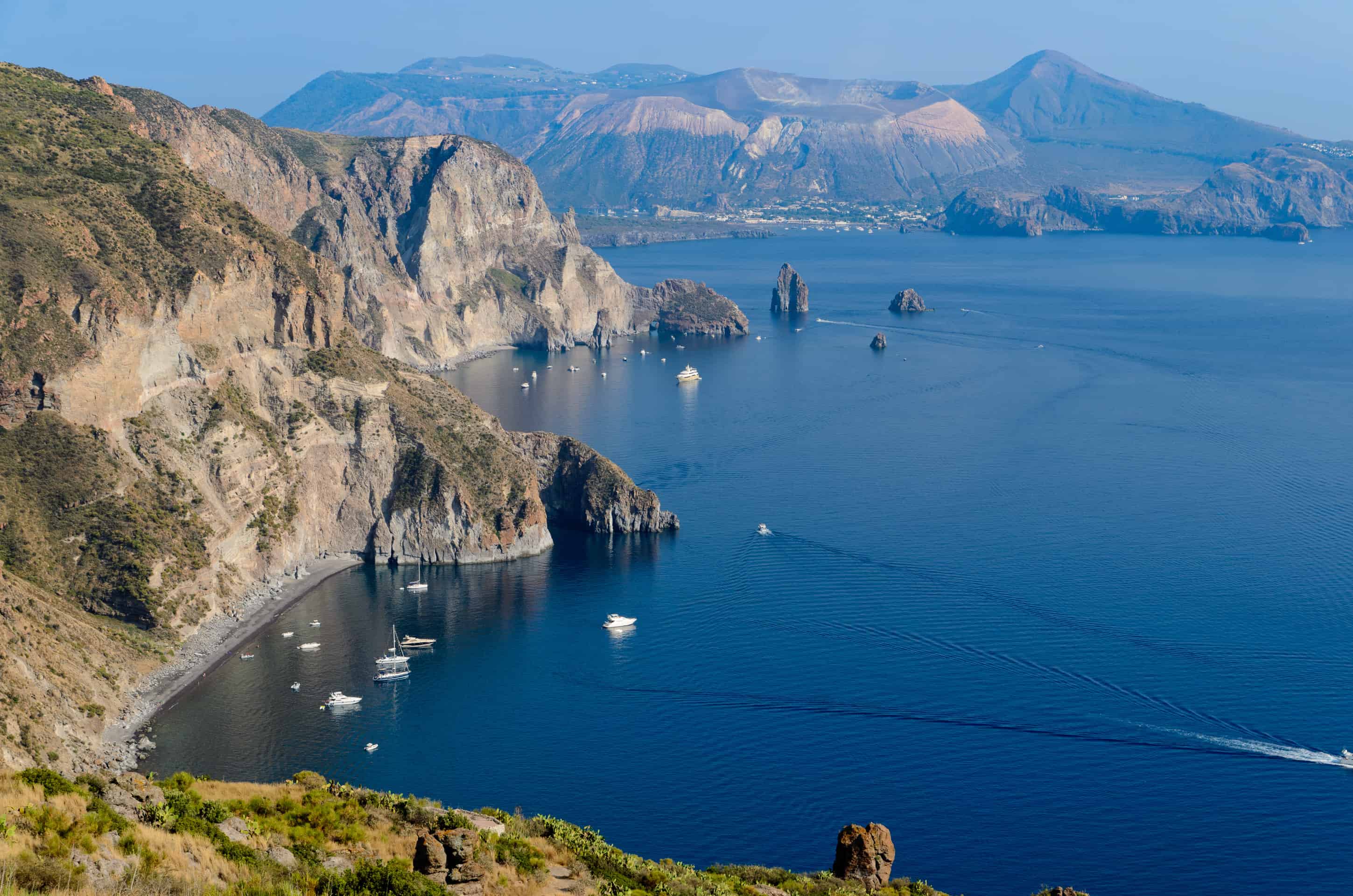 Expansive blue seas, white sands, and volcanic mudbaths: the Aeolian Islands are among the best of Italy’s beach paradises. But unlike their busier rivals, the Aeolians are an ideal place to get away from it all and find a simpler, more rustic life – at least for a time.

Located in the Tyrrhenian Sea, between Sicily and the Italian mainland, the Aeolian islands were formed due to volcanic activity over a period of 250, 000 years. Even today, here are two active volcanoes – Stromboli and Vulcano – in the archipelago, while each island has been shaped by volcanic formations.

Humans began moving to these volcanic islands in the Bronze Age, with the archipelago thriving as a point for trade between Sicily and the Italian mainland. Later inhabited by Greek pirates, the islanders sided with the doomed Carthage during the Punic Wars – while Roman retaliation saw the islands plunged into poverty for the years of the Roman Republic and Empire.

In the Middle Ages, Lipari, the most populated Aeolian Island, became home to Benedictine monks sent by the Norman kings of Sicily. When the mainland of Sicily revolted against Angevin (French) rule in the Sicilian Vespers, the islanders sided with the French and received privileges as a result. The Aeolian Islands were incorporated into the Kingdom of Two Sicilies in the mid-15th century.

In 1544, Lipari was besieged by the Ottoman Empire. The islanders surrendered, and around 9,000 locals out of a population of 10,000 were taken into slavery. The islands were repopulated with Sicilian, Calabrian and Spanish families and a fleet was established to defend the Tyrrhenian Sea from the Ottomans.

In the 19th century, prisoners were sent to a penal colony on the islands, which closed in 1916. Under Mussolini, the government tried to reopen the penal colony in 1926, but this was unsuccessful as the islanders pulled down the remains of the prison. After this, Lipari Castle was used to house anti-fascist political prisoners, until liberated by the Allies in 1943.

Today, each of the Aeolian islands has its own combination of laid-back charm and must-see sights:

The largest and most populous of the seven Aeolian islands, Lipari is lively and bustling by island standards. As the world’s largest producer of pumice, Lipari has an industrial history – and though mining has since ended, it still leaves dust on the sea bed. Make sure to head to Spiaggia Bianca (White Beach) for crystal-clear waters and white sands, while the town (also known as Lipari) is home to a Greek acropolis- since used as a Roman fort and a concentration camp under Mussolini’s rule – and an interesting Archaeological Museum, home to Neolithic, Greek, and Roman remnants, including theatrical masks and props commissioned by Sophocles and Euripides.

The closest of the islands to Sicily, Vulcano takes its name from and is dominated by the active volcano, Vulcano, which bubbles night and day and emits a sulphurous stench over the island. It’s an easy hike to see the volcano in action, and relax in the warm mud baths.

An island virtually dominated by the eponymous volcano, Stromboli was made world famous by the 1949 film directed by Roberto Rossellini and starring Ingrid Bergman. Stromboli (the film) became notorious thanks to the extramarital affair between Bergman and Rossellini, which saw Bergman denounced on the floor of the US Senate.

Stromboli has cast a long shadow through literature and film: it was featured in Jules Verne’s Journey to the Centre of the Earth, inspired Mount Doom in J.R.R. Tolkien’s The Lord of the Rings; and was the backdrop to Michelangelo Antonioni’s 1960 film, L’Avventura. Though visitors were once able to walk to the top of the volcano, the summit was closed after an eruption in 2007. Stromboli is nonetheless worth visiting for its two remote villages, and the amazing black-sand beaches, formed by lava and other volcanic fragments dropping down from the summit.

The greenest of the islands, the natural beauty of Salina was put on the map thanks to the 1994 film, Il Postino. The main town, Santa Marina Salina is lined with chic boutiques and food shops, occupying the 19th century homes of wine traders who specialised in selling sweet Malvasia to the British. The boom would end in 1890 when a disease destroyed 90 percent of the vines, and a number of islanders immigrated to Australia – thus beginning the highly successful Australian wine industry. Outside of the main town, Salina is home to pretty mountains, black-sand beaches, and lush forest – which can be explored by mule or on foot. The Malvasia grapes are back in action, so make sure to  visit the wine cellar of one of Salina’s eleven working vineyards.

Just to the north-east of Salina, Panarea has for some time been the stamping ground of the rich and famous, who hang around the swimming pool of the Hotel Raya, built in the 1960s and only more exclusive since then. For those not among the international jet-set, Panarea nonetheless has a lot to offer, ranging from clear sea beaches to fascinating Bronze Age huts on the bay of Cala Junca.

The highlight of turtle-shaped Filicudi is the underwater graveyard of shipwrecks, with ancient Greek anchors and long-lost cargoes, protected as an archaeological site in 2008. For those who don’t dive, take a cruise around the island to see the beautiful sea grotto, or head on land to enjoy the beautiful coastline, rugged cliffs, and pretty villages of this craggy island.

The western-most island of this volcanic archipelago, cone-shaped Alicudi is one of the most remote and mysterious places in the entire Mediterranean. With a population of 80 (most of whom are related, and many of whom have not left the island), no cars on the island (with transportation by mule or boat), a visit to Alicudi seems like a trip into the past. Rumour associates the island with magic and witchcraft, with many believing that the locals are blessed with the power to divert cyclones. Nonetheless, the climb to the top of the island offers panoramic views of the surrounding sea, while empty beaches offer the traveller a total escape from the modern world.