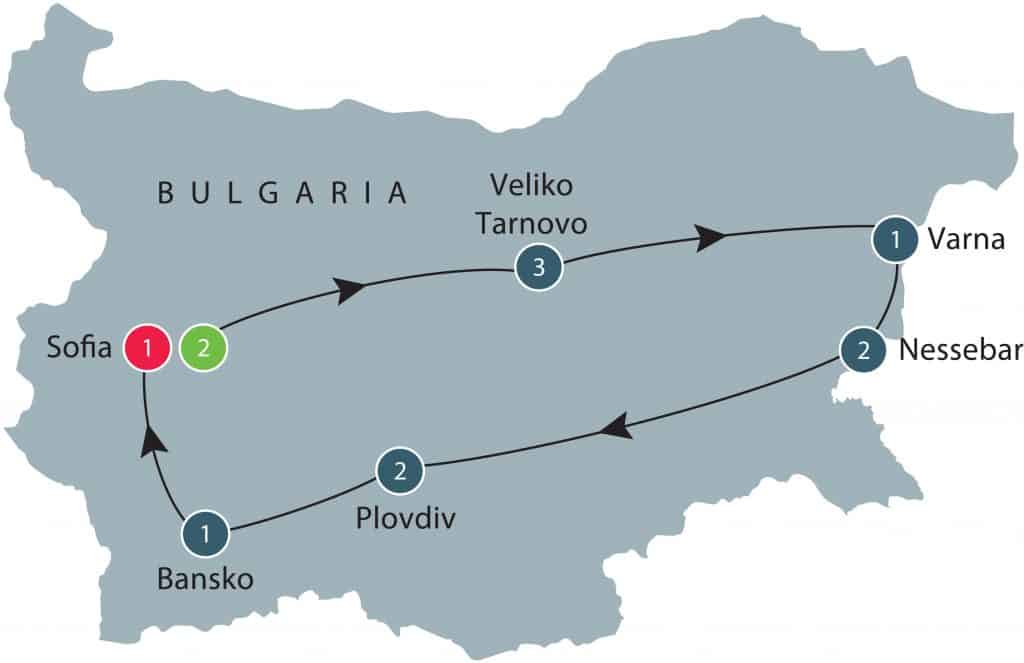 Discover Bulgaria with Odyssey Traveller in this 14-day tour as we explore this European country's rich heritage and history. This fully guided small group tour, especially designed for mature and senior travellers, begins and ends in Sofia, the capital and largest city of Bulgaria. We will visit historic museums, cathedrals, and important monuments and ancient settlements that will paint a picture of the country's years of foreign rule and the dramatic revival of its national consciousness in the 19th century.

Bulgaria is located on the eastern portion of the Balkan peninsula and is bordered by the Black Sea to the east. During the Bronze Age it was inhabited by Thracian tribes, who were eventually expelled or absorbed by the Greeks and the Romans. Early Bulgars (from which the country takes its name) took control of the region around the 7th century. Following years of prosperous trade, expansion, and war, the Bulgars were conquered by the Byzantine Empire, followed by the Ottomans who ruled Bulgaria for centuries. In the 19th century, the Bulgarian National Revival, marked by the spread of education and a cultural renaissance, paved the way for the liberation of Bulgaria from Turkish rule. Bulgaria became a part of the Eastern Bloc in 1946 and transitioned into democracy in 1991.

On this tour, accompanied by an Odyssey Program Leader and English-speaking local guides, we will view Thracian tombs, Roman ruins and settlements, fortresses and castles, and ancient churches and monasteries with incredible paintings and frescoes. We will also enjoy city tours of:

and visit interesting spots en route as well as the historic spots on the coastline of the Black Sea.

You can learn more about Bulgaria from Odyssey Traveller. We regularly offer tours designed for the active senior or mature traveller to enjoy in a small group holiday and learning environment. The 23-day Sofia, Bucharest, and Budapest tour may be of particular interest.

We also publish articles to provide more information to both loyal and prospective participants. Articles of possible interest is this two-part post filled with travelling tips for seniors, an article providing some advice for the over-50s with respect to life, exercise & travel, and an important article about practising responsible travel.

Overview: We will arrive at the hotel in Sofia by our own arrangements, and gather together in the evening for a welcome dinner arranged in the hotel.

Overview: Sofia is the capital and largest city of Bulgaria. It was originally called “Serdica” after the Celtic tribe Serdi which once inhabited the region. Today we will go on a full-day guided sightseeing tour of the city to visit places that will offer insight into Sofia’s ancient history and its connection to Bulgarian heritage. The day’s highlights include the Serdica Archaeological Complex, an excavation site displaying the remains of the ancient city. We will also see the St Aleksandar Nevski Cathedral, one of the largest Eastern Orthodox cathedrals in the world, and nearby Sveta Sofia Church and the Tomb of the Unknown Soldier. We will visit the National Museum of Natural History, which holds more than a million species of flora, fauna, and minerals, and the Boyana Church, a World Heritage Site, which has incredible frescoes.

Overview: Today we will head east towards Veliko Tarnovo, which will be our base for three nights.

First, we will stop at the Emen Canyon, carved by the great Negovanka River. After this we will head to the village of Arbanasi for a half-day tour. We will visit the Konstantsaliev House Museum, a house fortress offering a unique example of Arbanasi architecture; the Church of the Nativity, whose interior is covered in paintings and frescoes dating back to the 17th century; and  the richly decorated Preobrazhenski Transfiguration Monastery.

In Veliko Tarnovo we will head to our hotel and have dinner.

Overview: From our hotel in Veliko Tarnovo, we will head to the hills of rural Gabrovo, visiting the Etar Ethnographic Complex, an open-air museum with 50 sites showcasing life in Gabrovo in the 18th to 19th centuries; the Sokolski Monastery in Etara, the Wood Art Carving Museum in Tryavna, and the monastery in Dryanovo.

We will return to Veliko Tarnovo and have dinner in a local restaurant.

Overview: Today we will explore Veliko Tarnovo itself. We will view the main sights, including Tsarevets Fortress which dominates the village skyline. The remainder of the day is free for us to spend at our leisure. In the evening, we will meet together as a group to dine in a local restaurant.

Overview: We will leave Veliko Tarnovo this morning and head east, bound for the Black Sea. Our first visit of the day will be to the Thracian Tomb of Sveshtari, a World Heritage Site and one of the most stunning of the Thracian Tombs to be seen in Bulgaria. This is a well-preserved monument to the culture of the Getae, a Thracian people who interacted with the ancient Greeks.

Next will be a half-day guided tour in Shumen, once a Thracian settlement with great sights including the Tombul Mosque, the monument to the founders of the Bulgarian State, and the Shumen Fortress dating back to the Iron Age. We have one more brief stop en route at the early medieval rock carving called the “Madara Horseman” near the village of Madara, before we continue to the seaside city of Varna.

Overview: In the morning we will visit Varna’s National Archaeological Museum before heading north up the Black Sea coastline. We will visit the Aladzha Monastery, an Orthodox Christian cave monastery complex famed for its colourful murals, and the Balchik Palace and Botanical Gardens, constructed as a summer residence of Queen Marie of Romania when Bulgaria was under Romanian control. Born Princess Marie of Edinburgh, she married Crown Prince (later King) Ferdinand of Romania in 1892.

The afternoon will be spent travelling south down the coast to Nessebar, our base for two nights. Nessebar, originally the Thracian settlement of Mesembria before it became a Greek colony in the 6th century BC, was proclaimed a UNESCO World Heritage site with many churches and small museums worthy of a visit. The group will have a tour of the town upon arrival.

Overview: After a week of sightseeing, today we will enjoy a full day to be spent at our leisure in Nessebar. Consider visiting the museums or churches or enjoy a relaxing day by the sea.

Overview: We will head westwards back into the Bulgarian heartland, with many interesting visits en route. Following a brief stop in the city of Sliven, we will continue to Kazanlak where we will be joined by a local guide for a day of Thracian tombs sightseeing, visiting the Ostrusha and Golyana Kosmatka tombs. We will then continue to Plovdiv, Bulgaria’s second-largest city and our base for the next three nights.

Overview: Today we will be acquainted with the city of Plovdiv with a half-day guided city tour. The city is located in the midst of six hills that rise to a height of 400 feet (120 metres). It was known as Trimontium when it served as capital of the Roman province of Thrace. We will visit the Roman theatre of Plovdiv constructed in the 1st century and the Museum of Thracian Art which contains an exact replica of the Thracian Tomb of Alexandrovo. We will also view Lamartine’s House, where French poet Alphonse de Lamartine stayed in 1833.

We will then head south to visit the 11th century Bachkovo Monastery before returning to Plovdiv.

Overview: We will take a full-day return excursion from Plovdiv to Stara Zagora and Haskovo. In Stara Zagora we will visit some of the best preserved prehistoric sites in Europe at the Neolithic Dwellings Museum and the Regional Museum of History. We will then push on to Haskovo to see the actual Thracian Tomb of Alexandrovo, a replica of which we’ve seen the day before. We will also view the Blessed Virgin Mary Monument, which stands at a total height of 31 metres or 102 feet with a chapel in its pedestal. We will return to Plovdiv and have dinner in a local restaurant.

Overview: We will spend the morning visiting some of the remaining points of interest in Plovdiv. Today we will see the Ethnographic Museum at Koyumdijioglu House and the Regional Archaeological Museum. We will head southeast to Bansko, a popular ski resort in winter and a idyllic rural town in the summer months. The remainder of this day will be spent at our leisure in Bansko; the group may explore the surrounding countryside or simply rest.

Overview: The group will begin today with a morning walking tour of Bansko to see the key points of interest with a local guide. We will visit the Holy Trinity Church, famous for its tall belfry and beautiful interiors, and the nearby Velyanova House Museum.

We will then head to Rila for a guided tour of the Rila Monastery, saving the best for last in a way as this is the largest and most famous of all monasteries in Bulgaria. The Rila Monastery is a World Heritage Site founded in the 10th century in the name of St John of Rila. The original monastic complex was destroyed by a fire at the beginning of the 19th century and was rebuilt between 1834 and 1862. It is considered a masterpiece of Bulgarian National Revival architecture.

We will return to Sofia for the night and have our farewell dinner.

Overview: The end of breakfast marks the end of the tour and our services.

1
Visit the Serdica Archaeological Complex, displaying the remains of the ancient Roman city of Serdica (now Sofia).
2
See the St Aleksandar Nevski Cathedral, one of the largest Eastern Orthodox cathedrals in the world.
3
Visit the Etar Ethnographic Complex, an open-air museum with 50 sites showcasing life in Gabrovo in the 18th to 19th centuries.
4
Enjoy a relaxing day by the Black Sea in Nessebar, a former Thracian and Greek colony, now a World Heritage Site.
5
Stroll through the Rila Monastery, Bulgaria’s largest monastery and a masterpiece of Bulgarian National Revival architecture. 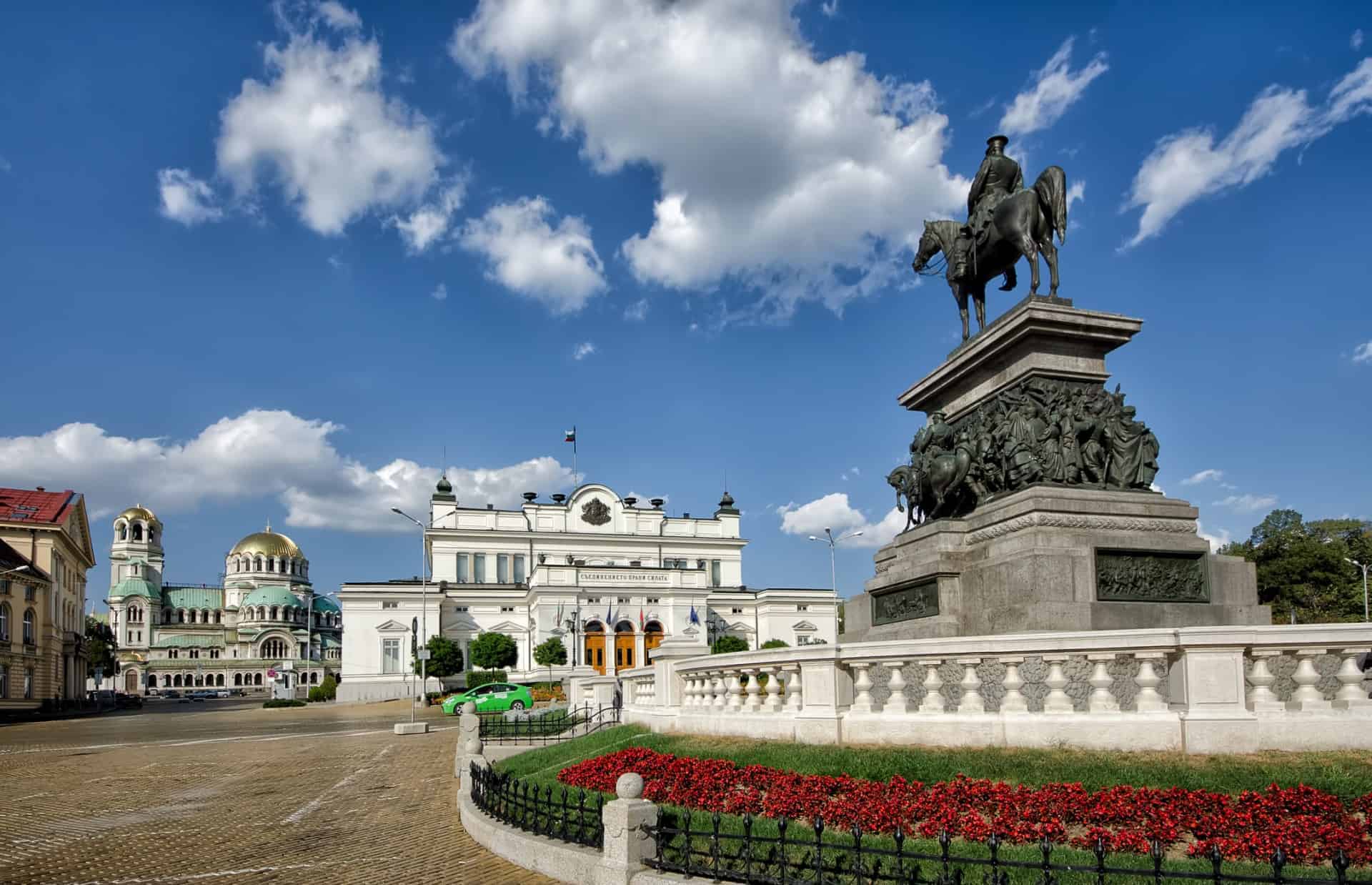 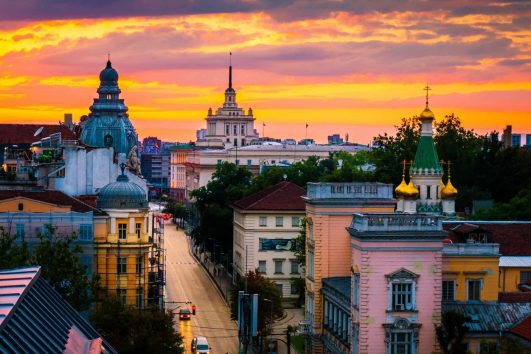 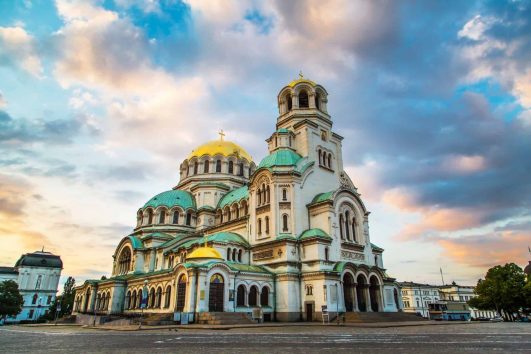 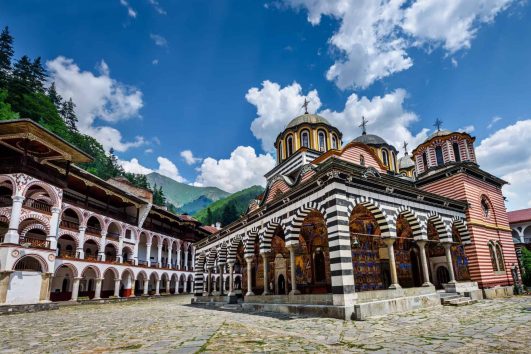 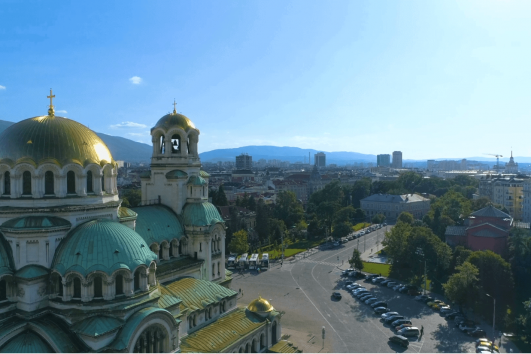 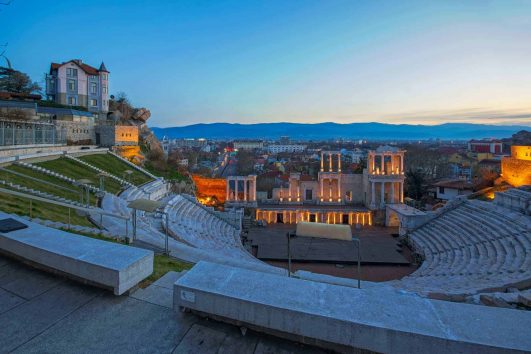 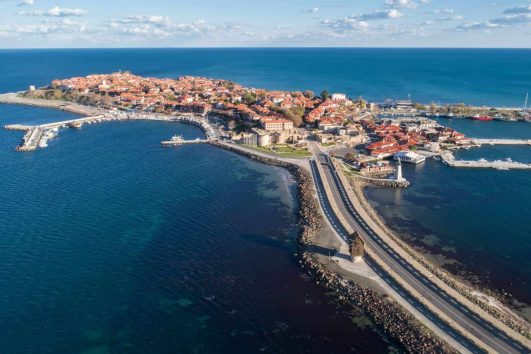 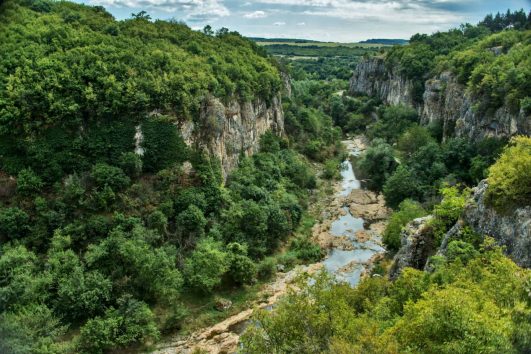 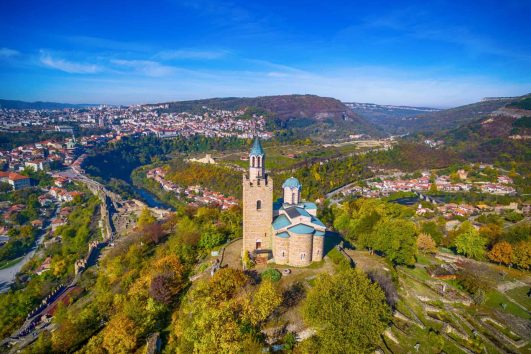 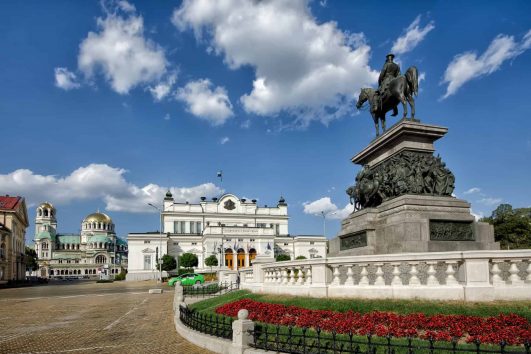