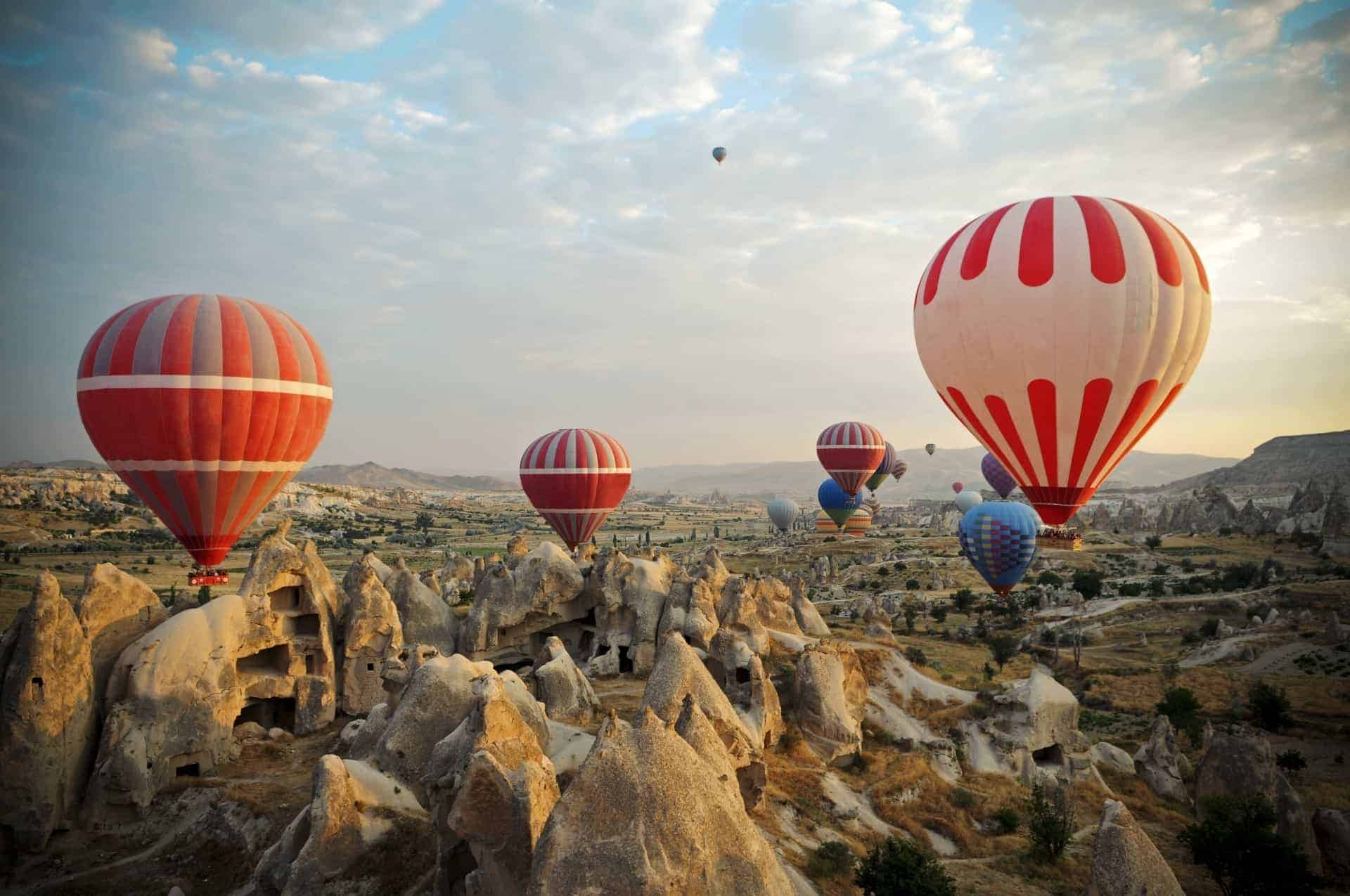 Cappadocia, central Turkey, approximately 1h 15m flight from Istanbul airport to Kayseri airport, is a region of exceptional natural wonders, in particular characterized by fairy chimneys and a unique historical and cultural heritage. Goreme National Park and the Rock Sites of Cappadocia is a Unesco world heritage site since 1985.

Cappadocia consists of a high plateau over 1000 m in altitude that is pierced by volcanic peaks, with Mount Erciyes being the tallest at 3916 m. Due to its inland location and high altitude, Cappadocia has a markedly continental climate, with hot dry summers and cold snowy winters. Rainfall is sparse and the region is largely semi-arid. Cappadocia includes 4 cities: Nevsehir, Kayseri, Aksaray and Nigde.

The area is a popular tourist destination, as it has many areas with unique geological, historic, and cultural features. Most popular travel photos will include an image of a hot air balloon over Pigeon valley, which is available for travelers in Goreme.

The Cappadocia region is made from sedimentary rocks formed in lakes and streams and ignimbrite deposits that erupted from ancient volcanoes approximately 9 to 3 million years ago. The rocks of Cappadocia near Goreme eroded into hundreds of spectacular pillars. People of the from Cappadocia region cave dwellings, i.e. houses, churches and monasteries from the soft rocks of volcanic deposits, which can be seen today still. Goreme became a monastic centre in 300-1200 AD.

The first period of settlement in Goreme goes back to the Roman period. The Goreme Open Air Museum is the most visited site of the monastic communities in Cappadocia and is one of the most famous sites in central Turkey. The open air museum contains more than 30 carved-from-rock churches and chapels, dating from the 9th century to the 11th century.

Odyssey Travelers Discover Turkey escorted small group history tour visits some of the most spectacular, varied, and historically important sites in the ancient world. Thissmall group tour Turkey tour begins and ends in Istanbul, Turkey’s largest city and seaport, and the place where east meets the west on the Bosphorus strait. Discover Turkey with Odyssey on this amazing guided tour through the ancient world linking the Black sea, Egypt, Syria and Europe together on this history tour. Our tour packages are especially designed to be suitable for mature-aged and senior travelers, whether joining as a couple or as solo travelers.

You will stay 3 nights in a cave hotel in Goreme during Odyssey’s Turkey tour and the small group tour to Cappadocia, with a chance to book the Goreme hot air balloon experience, where you will have a birds eye’s view over the beautiful Goreme National Park, with its famous Goreme fairy chimneys, Goreme Valley and Goreme caves.

You will visit Goreme Open Air Museum, a vast complex of ancient monasteries carved into the rocky landscape.

We also visit Love Valley, euphemistically named for its distinctive rock structures. Finally we visit Uchisar, a natural citadel full of stairs, tunnels and passages, located at the highest point in Cappadocia. The trip to the top of Uchisar Castle provides a fantastic view of the surrounding region.