Odyssey offers easy, convenient, and relaxed escorted small group tours across the Baltics and beyond. We explore Lithuania’s incredible natural beauty, its medieval commonwealth heritage, World Heritage Sites, and fascinating historic cities, all with some truly spectacular scenery along the way. This and more is all waiting to be explored on one of Odyssey’s small group tours of Lithuania, designed for the senior traveller, and led by experienced, and enthusiastic like minded people.

Melding pristine nature and historic cities, Lithuania is a nation with a truly unique history and culture. The Lithuanian people were the last in Europe to convert to Christianity, and Lithuanian culture remains influenced by old traditions as pagan remnants dot the landscape. The capital city, Vilnius, is a baroque masterpiece, dotted with churches and cathedrals, while the power of medieval Lithuania is tangible at the looming Trakai Castle. And Lithuania is also a natural wonderland, home to pristine beaches on the Baltic coastline and a lakeland seemingly designed for summer boating, kayaking, and berrying. Journey with Odyssey Traveller as we uncover the distinctive history, culture, and natural scenery of Lithuania. 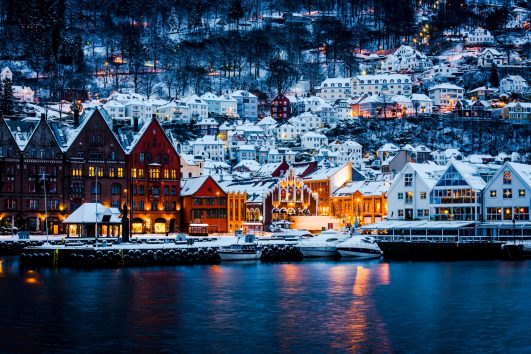 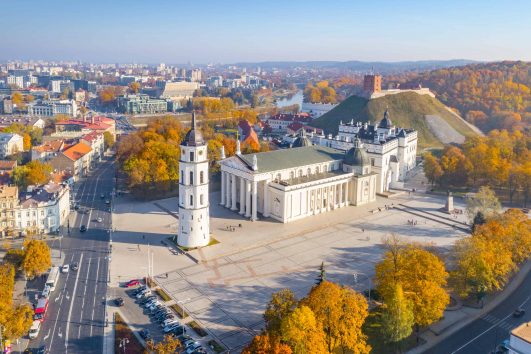 Vilnius, is part of the escorted small group tour of the Baltics  for senior travellers, that includes Berlin, Poland, Latvia, Estonia, Finland and finishes in St Petersburg. 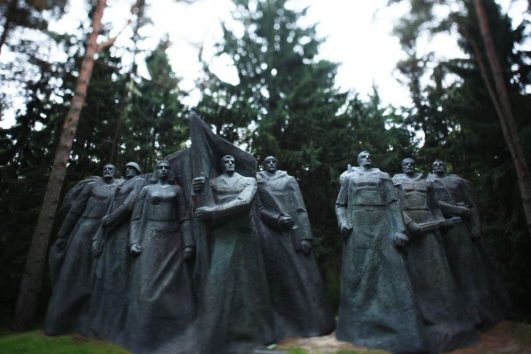 A communist statue graveyard, Grutas Park is a dark homage to one of the worst periods of Lithuanian history. Eight kilometres east of Druskininkai, a spa town on the Nemunas River in southern Lithuania, Grutas… 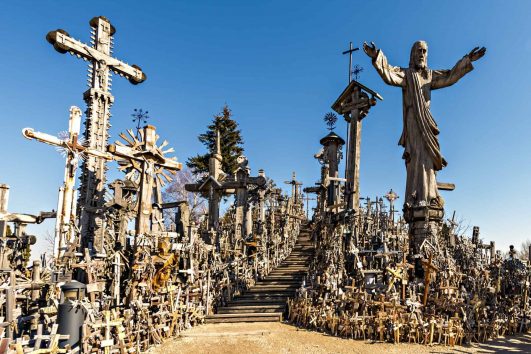 Just outside the northern city of Siauliai lies a small hill in the middle of farmland that has been crowned with around 100,000 crosses in all different sizes. There are tiny crosses, massive wooden crosses… 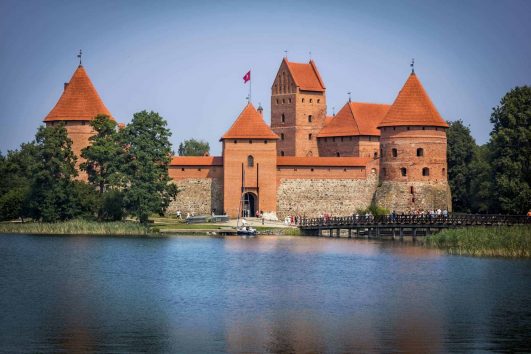 Trakai Island Castle is like something from a fairy tale - there is nothing quite like admiring the view of the coral-coloured brick towers surrounded by moss-green trees as you cross the wooden bridge, with… 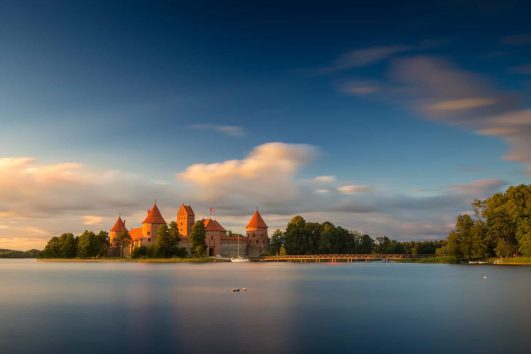 Escorted small group tours for mature and senior travellers to the Baltic state of Lithuania. Designed for couples and solo travellers who like to explore and enjoy learning as they travel to Vilnius, or  Grutas park and beyond. 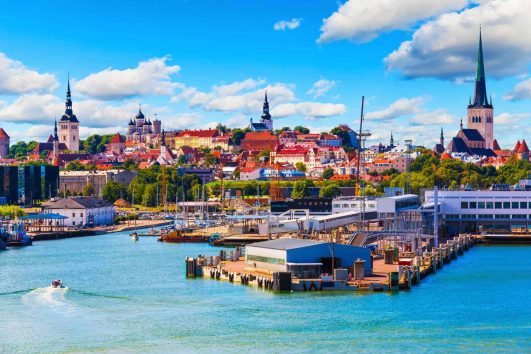 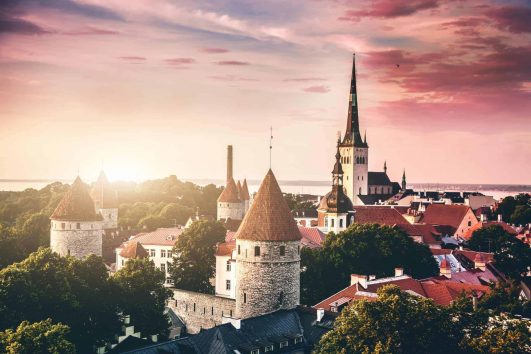 Odyssey travels by coach and occasionally uses local transport, including trains and ferries. Specifics are always outlined in your tour itinerary. Trains services link major cities, while bus services operate in nearly all towns and cities. Taxis are also available in cities, and can be flagged down in the street or can be ordered by phone.

Lithuania is situated on the eastern shore of the Baltic Sea, and covers an area of 65,200 square kilometres. Lithuania’s terrain features rolling hills, marshes and lakes, and sprawling forests, with 32% of the country covered by forest.

Lithuania has a continental climate, with cold winters and mild summers. Temperatures often drop below freezing in winter, so depending on when you intend to travel, check the weather reports and prepare accordingly.

Lithuania has 4 UNESCO World Heritage Sites. You can view the official list of the sites here (https://whc.unesco.org/en/statesparties/lt). The listed sites include:

One of the biggest events on Lithuania’s annual calendar is the Song Festival, held in Vilnius. Bringing together 30,000 singers from across Lithuania, the Song Festival features many folk songs native to Lithuania and unites the nation in song and harmony. Užgavėnės is an iconic festival that is held during the seventh week before Easter, whereupon revellers don mythologically-themed costumes, cook and eat traditional pancakes and burn an effigy of winter (‘morė’). Other notable occasions include Statehood Day, which commemorates the crowning of King Mindaugas in the 13th century, and All Saint’s Day in November, whereupon graves are cleaned and decorated with flowers and candles.

Befitting its cold climate, Lithuanina food is hearty and filling, with root vegetables, meat and starch all central to Lithuanian cuisine. Soup dishes are popular, including betroot soup, a warm soup made out of beetroot, onion, carrot, and meat stock, and chilled borscht, made out of betroot, kefir and hardboiled eggs. Potatoes are frequently employed as a key ingredient in savoury dishes, including potato pancakes, kugelis (a baked potato pudding often served with lingonberry jam or sour cream) and the national dish, cepelinai (dumplings made from a mixture of raw and cooked potato dough filled with pork meat and covered with sour cream and bacon sauce). Beer (alus) is the most common alcoholic beverage in Lithuania, while production and consumption of midus (a variety of mead made from honey) is said to go back thousands of years. Coffee and tea are also widely consumed, though both are usually served black.

Generally speaking, Lithuania is very safe to travel in, though always exercise common sense while travelling.

Whenever you travel overseas, it’s always wise to take an appropriate travel adaptor. Lithuania’s electricity supply runs at 230V and 50Hz. Lithuania uses both the Type C and Type F electric plugs, so make sure you have the right travel adaptor with you.

Hill of Crosses, the striking pilgrimage site north of Šiauliai featuring tens of thousands of crosses

Grutas Park is a sculpture garden of over 100 Soviet-era statues and artefacts, providing an unprecedented insight into Soviet rule.

What time zone is Lithuania in?

If you’re on an Odyssey tour, we take care of tipping so you don’t need to give it a second thought. However, in your free time, or if travelling independently, it’s essential that you tip an appropriate amount for services.

Wifi should be freely available in most hotels, cafes and restaurants when travelling in Lithuania

Can I use my mobile phone in Lithuania?

Check with your cell phone provider to see whether you’re able to make calls and use data while in Lithuania. Many providers will allow you to pay a daily fee that allows you to make calls and check the internet while only being charged your regular rates. However, be certain to inform your provider that you’re heading overseas, because just like a bank they can turn off your service as a result of unusual activity.

12 reasons to visit Lithuania this summer.

The Guardian: An insider’s guide to Vilnius.