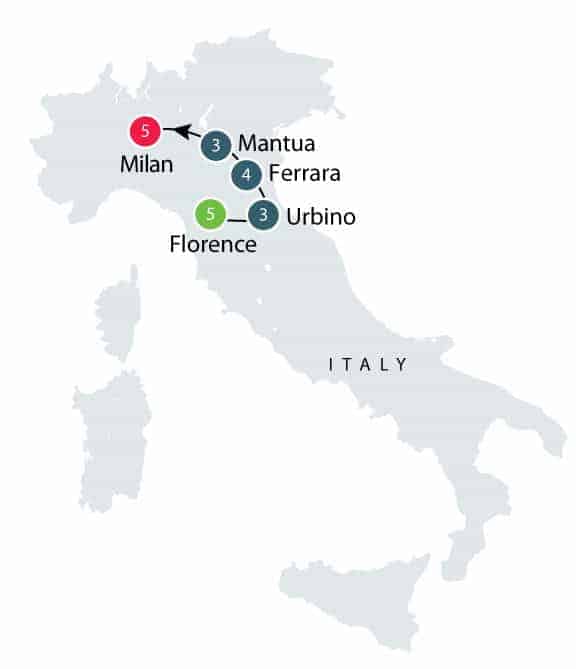 Renaissance Italy small group history tour designed for mature or senior travellers. We welcome both couples or solo travellers who are looking to explore a road less travelled in Europe. In the 15th and 16th centuries the principalities that became Italy were alive with new ideas. The boundaries of art, architecture, music, science, politics, religion and literature were pushed. It was also riven by bitter rivalry and even open warfare between the numerous independent city states. Out of this chaos and upheaval emerged a number of significant families who drove the development in their individual cities. In a number of cases their quarrels also led to the destruction of much of what they had achieved. This tour concentrates on the story of five families. Five very important Italian renaissance families and the cities they helped to build.

This story of five families is all that Hollywood seeks in a blockbuster. They intermarried, occasionally they were allies against the Pope, the king of Naples, the king of France and other states. Sometimes they fought pitched battles against each other.  But all five families left an amazing legacy of buildings and art works which you can admire today on this small group that looks at the  Renaissance  of Italy the families that made it happen.

About this Renaissance Italy tour

In this Italian renaissance small group tour we take the time to explore these five independent cities. We learn through our local guides about the families who drove the development of each city.  Florence in Tuscany is always part of the tourist trail.  The other four cities are often over-looked due to more popular destinations, but each is Renaissance a gem.  Everyone has heard of Milan though surprisingly it is not high on the average tourist’s list of “must see” cities. Urbino, Ferrara and Mantua are often ignored completely. This tour spends up to 5 nights in each city to explore these hidden gems and create a unique travel experience. You learn and see why each is so important to any study of Renaissance Italy. We will look particularly at the palaces, churches, civic buildings. Your tour also explores the frescoes, and other art works created for these families by some of the most significant artists of the period.

During the early period of Medici influence Florence was not a ducal state. The Medici family did not rule as hereditary monarchs. Florence was, in name at least, a republic until early in the 16th century.  But the Medici family had the wealth and the influence to run the state as they saw fit for much of the 15th century. The renaissance period saw the rise of Cosimo d’Medici and his son Lorenzo the Magnificent. It was a period that witnessed  the murder of Lorenzo’s brother, Giuliano. It saw  the ascendancy of two Medici popes to the papal throne and the short rule of the religious reformer Savonarola. During this period the Medici family built a great many splendid palaces filled with amazing art works.

Urbino is a small  important city state ruled by the Montefeltro family during the Renaissance period.  The city of Urbino also has Word Heritage status. It is a classic hill town with medieval walls, four gates, narrow streets and many steps.  Frederico de Montefeltro ruled the city between 1414 and 1482. Montefeltro's  stated aim was to make his city “comfortable, efficient and beautiful”. Frederico was an able warrior, a distinguished diplomat and an enthusiastic patron of all the arts. Here in Urbino, Piero della Francesca wrote on the science of perspective, Francesco di Giorgio Martini on architecture and Giovanni Santi, the father of Raphael, on the history of art.

Ferrara, another city listed as a site of World Heritage importance, was ruled by the Este family from the mid-13th century until the death of the last heir in 1597. During this period the Este family created a city full of great art and architecture. The city developed particularly under the rule of Ercole d’Este in the late 15th and early 16th centuries. He had the city re-planned using the most modern of renaissance designs leaving it one of Italy’s best planned renaissance cities. Scandal, however, was never far from the Este family. The infamous Lucrecia Borgia married into the family. In the Corpus Domini Monastery, Borgia is buried with many other members of the Este family.

Mantua, in the north of Italy,  like Urbino and Ferrara, is also a World Heritage city. Surrounded on three sides by lakes, the city is little bigger than it was during the period of its greatness in the 15th and 16th centuries. The three lakes (a fourth lake has dried up) were built in the 12th century to defend the city. The Gonzago family ruled Mantua from the early 14th century until 1707. During that time the city was beautified with many palaces, churches and public buildings.

Nearby Sabbioneta was specifically planned for Vespasiono Gonzago to be the “perfect city” and, it too, has been given World Heritage status. The artist Mantegna and the architect Alberti spent many years in Mantua working for the Gonzagos.

This is the largest city on our tour. Famous for its Cathedral and Leonardo’s “Last Supper”.  The Visconti family ruled Milan from 1277 until 1447 when the last Visconti died with no legitimate heir. After a brief period as a republic the city was taken by Francesco Sforza who was a renowned military leader and married to the illegitimate daughter of the last Visconti. Although their dynasty was not long lasting, under Sforza rule Milan became one of the leading cities of Renaissance Italy.

The Italian renaissance small group tour is a 21 day program, visiting 17 locations, with stories shared by many local guides. We visit some 48 locations to learn about Renaissance Italy and stay in each of the cities for up to 5 nights to spend a memorable vacation in the country.

To prepare for the trip, check out our blog post listing 10 great books to read before travelling Italy!

You can learn more about Italy with Odyssey's country profile where all the other tour departures are listed as well. For more details, click the ‘Top 5’ or ‘Itinerary’ buttons above! If you’re keen to experience this tour, please call or send an email. Or, to book, simply fill in the form on the right hand side of this page.

Overview: In the afternoon meet your program leader in your Florence hotel for an introductory meeting and a welcome dinner.

Overview: This morning’s tour of Florence begins with a visit to Medici-Riccardi palace to view the famous frescoes showing the Medici family in the entourage of the Magi. From here we will visit the Convent of San Marco, The Academia, the Duomo.

Overview: Coach tour to the cities of San Gimignano, with its splendid towers, and Siena.

In Siena, a rival to Florence until it was absorbed into the larger state, we will spend time in the magnificent cathedral as well as in the Palazzo Publica with its frescoes of good and bad government.

Overview: Early morning (8.30 am) visit to the Uffizi Gallery.

The rest of the day spent visiting San Lorenzo (for the Medici tombs), the Bargello, the Palazzo Vecchio, and finally, in the afternoon, the Pitti Palace.

Overview: We start with a morning visit to Santa Maria Novella in the morning.

We then visit to the city of Lucca with a brief stop in Pisa on the way home.

Overview: Travel to Urbino with a stop in the city of Arezzo to visit the church of San Francisco de Arezzo to view the restored frescoes of Piero della Francesca.

Afternoon arrival in Urbino with time for a city walking tour. This tour includes Oratory of St Joseph as well as the National Gallery of Le Marche. In the national gallery this groups focus is on the painting of the ideal city. This piece served as the visual model for many renaissance towns.

Overview: Morning visit to the nearby city of Gubbio which was also ruled for a significant period by the Montefeltro family. Visit to the Palazzo Ducale which was rebuilt by Frederico.

Afternoon return to Urbino for some free time to explore this city.

Overview: We have a full day of sightseeing in Urbino including the Palazzo Ducale with its important art collection, the Duomo which was rebuilt in 1801 but still contains important renaissance paintings, the house of Raphael and his father Geovanni Santi, the Oratory of St Joseph and the John the Baptist Oratory.

Overview: Travel to Ferrara via San Marino, Rimini and Ravenna. There will be stops in Rimini to admire the Tempio Malatestiano built for the notorious Sigismondo Malatesta, Duke of Rimini and in Ravenna to visit one of the famous churches with their Byzantine mosaics.

Overview: Day of sightseeing in Ferrara including the Castello Estense, the Cathedral San Giorgio and the Palazzo dei Diamanti.

Overview: Day tour to Padua to visit the Scrovegni Chapel with its wonderful frescoes by Giotto. This will be followed by a walking tour of Padua including a visit to the Palazzo della Ragioni.

Overview: This will be a second day of sightseeing in Ferrara including Palazzo Schifanoia, the Casa Romei, the convent of San Antonoi Polesina and the Corpus Domini Monastery.

Afternoon city tour with visits to the Ducal Palace, the house of Mantegna and the Basilica Sant‘Andrea.

Overview: Morning tour to Vespasiano’s planned town of Sabbioneta with its grid layout, Palazzo Ducal and Palazzo Giardino. We will also visit the Teatro all’antica, one of only three Renaissance theatres in existence.

Afternoon back in Mantua with a drive past the Casa Del Mercata, merchants house. The Casa is not open to the public.

Afternoon at leisure in Mantua.

Overview: Visit to the city of Pavia, an important rival to Milan during the Renaissance period. This will include a visit to the Certosa di Pavia some 8 kilometres north of the city. We will also visit the Cathedral in Pavia, the Visconti Castle and the church of San Teodoro.

Overview: Milan city sites tour will include the Cathedral and the Convent of Santa Maria delle Grazie with its famous “Last Supper” by Leonardo da Vinci.

The rest of the day at leisure to explore and enjoy this bustling modern city with its rich history. 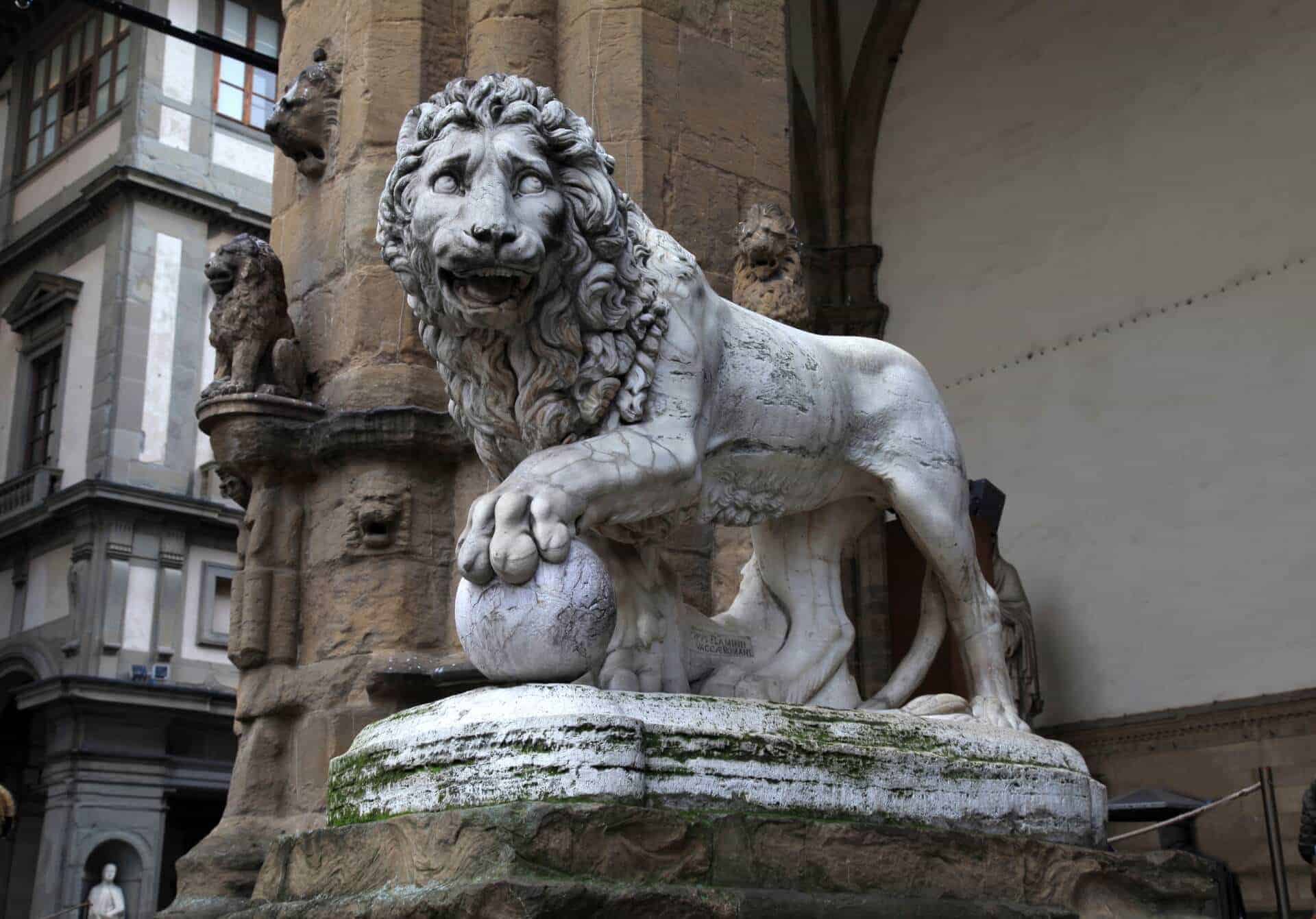