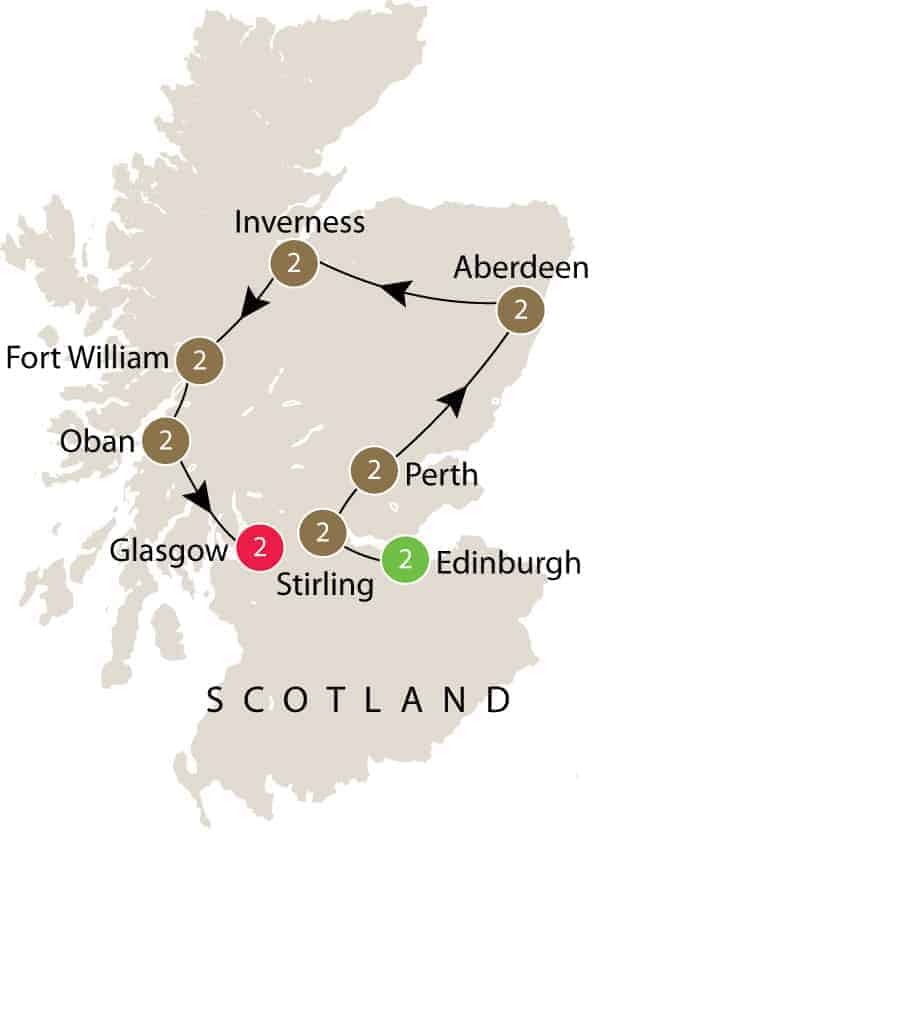 Over the course of this 19-day Jacobites & Scottish History small group tour, we explore the stunning scenery and the remarkable history of Scotland.  This tour, focused on the history of the Jacobites, commences in Edinburgh. We travel from Edinburgh as far north as Inverness, and then south again to finish in Glasgow.

We stay in 8 locations across Scotland, learn from 10 specialist guides about the Jacobites, all while exploring 28 places and taking part in diverse experiences across the duration of this tour.

Next is Stirling for 2 nights. From Stirling you travel north to Perth and on to Aberdeen. You visit Linlithgow Palace, Doune Castle and Alloa Tower along the way. Local guides enjoy sharing their stories with you at these historic locations.

Moving towards Inverness, you learn about Culloden battlefield and Urqhuart Castle. During this time of year you have the opportunity to join the Glenurqhart Highland gathering at Drumnadrochit for an afternoon. You travel south now to Fort William  for two nights and then Oban. Along the way on this section of the tour we listen to a local guide's tale of the 1692 massacre at Glencoe. Finally we finish the tour in Glasgow.

Jacobites, Scottish History tour is structured for the senior or mature couple or solo traveller. This tour is  for the traveller who enjoys exploring and learning in a small group environment.

If you would like to learn more about Scotland, visit our country profile where all the other tour departures are listed as well. For more details about this tour, click the ‘Top 5’ or ‘Itinerary’ buttons above! If you’re keen to experience this tour, please call or send an email. Or, to book, simply fill in the form on the right hand side of this page.

The following list of articles are either published by Odyssey Traveller or are carefully selected external source to maximise senior travellers' knowledge and enjoyment of Scotland when visiting:

Overview: Upon arrival in Edinburgh, we will come to the hotel individually. We will enjoy a welcome dinner at a local restaurant.

Overview: A full day in Edinburgh includes Edinburgh Castle, the last castle held for James VII after a three month siege of the castle in 1689, following the invasion of the Protestant William and Mary in 1688. This then resulted in the exile of James VII (also James II of England) and, as a result, is the ideal location from which to begin this Jacobite tour. Edinburgh castle also featured in the Jacobite rebellion of 1715 (the second of the three main rebellions) when Jacobite Highlanders successfully scaled the castle walls but failed to take the castle. Similarly, in 1745, Bonnie Prince Charlie led a Jacobite army which captured Edinburgh town but again failed to take the castle.

The guided visit to Edinburgh Castle in conjunction with a visit to the “Bonnie Prince Charlie and the Jacobites” exhibition at the National Museum of Scotland will give the group an understanding of the Jacobite cause and timeline over which events took place.

Overview: The itinerary includes a visit to Holyrood Palace where Bonnie Prince Charlie took up residence in 1745. Here the group can see where the prince lived, held balls and conducted official business.

The group transfer out of the city centre to visit  HMY Britannia in the afternoon.

In order to incorporate Ancestry into this tour  the tour includes an optional evening at Scotland’s People Family History Centre. Research assistants there will assist you  in finding records of Scottish ancestors you may have.

Please note that this could be an invaluable opportunity for some groups or members of the group but for others it may not be worthwhile and the website highlights that any ancestors in Scotland before 1855 may be difficult to find. It will also be necessary for the group to have some names and ideas of birth, death or marriage dates to work from.

Overview: A transfer to Lithlingow Palace is included. On the banks of Lithlingow Loch, this country residence was visited by Stuart kings of Scotland. In 1745 the Palace was visited by the advancing army of Charles Edward Stuart and by the Duke of Cumberland and his troops in 1746, in pursuit of the retreating Jacobites.

In the afternoon the more modern construction, the Falkirk Wheel can be visited. A stop at the near by Helix park is included where the group can view The Kelpies sculpture. A walking tour  is optional.

Overview: The impressive Stirling Castle is included in the morning; the castle has a particular connection with the Jacobite cause. In 1746, it was the location of an unsuccessful siege by Charles Edward Stuart when marching to Culloden.

The afternoon includes a visit to the Famous Grouse whisky distillery for a tour and tasting.

Overview: A morning transfer to Doune Castle is included, the filming location of Monty Python and the Holy Grail. I have included the audioguide at this castle as the reviews suggest it is very entertaining. The Castle is connected to the Jacobite theme of the tour by its use as a government prison from 1746 after having been taken by the Jacobites in 1745. Alloa Tower is now included en route to Scone Palace gardens.

Overview: Huntingtower Castle, former home of strong Jacobite supporters in the 1715 rebellion, is included in the morning. This is followed by a visit to the Blackwatch regiment museum. The Black Watch was formed by the government in the wake of the Jacobite rebellion of 1715. Originally comprised of groups of trustworthy highlanders, the Black Watch would patrol the highlands enforcing the new laws proclaimed by the government which restricted the weapons carried by the highland clans.

Overview: The Clan Donnachaidh Museum is included. It is a very small museum dedicated to clan heritage on the highland clans and this will only be a short visit.

The Battle of Culloden changed the highland way of life forever and this museum will provide an insight into Scottish culture.

In the afternoon a walking tour at Killiecrankie is included where the first battle in the Jacobite rebellion took place (1689). The House of Dun is  included on the way back to Aberdeen.

Overview: There are many castles in Scotland that would be relevant to a Jacobite tour, we have  choose a few. Drum Castle has a lovely rose garden and is a Jacobite Castle and was held by Jacobite supporters who fought alongside Bonnie Prince Charlie at the Battle of Culloden. Craigievar Castle contains a manuscript giving the order for the Battle of Culloden. Castle Fraser is now also included on this day.

Overview: An entrance to Leith Hall is included in the morning tour. The group continues on to Kildrummy Castle which was the home of John Erskine who launched the 1715 uprising. In the afternoon the itinerary includes Corgarff Castle which became a fortress of the redcoats as a base from which to control Jacobite activity in the area

Overview: The impressive Fort George is included this morning. It is a military fortress which has barely changes in 250 years. The Battle site of Culloden Moor and the new visitor centre is included in the afternoon.

It was here on April 16th 1746 that the last battle on British soil was fought. Following recent excavations on the battlefield, historians now label the battle a civil war between those who wanted the Stuart kings restored to the throne and those who wanted to retain the status quo. English and Scottish, Protestants and Catholics, and men from the same clans fought on both sides. The new centre houses a fascinating exhibition. A tour of the battlefield will show us even further detail of the events of that fateful day.

Overview: From Inverness the group travels along Loch Ness to Urquhart Castle for impressive views of the surrounding countryside.  The Glenurquhart Highland Gathering will  be taking place today.  The schedule includes displays or piping, dancing and traditional sports.

Overview: The Jacobite steam train runs from Fort William to the coastal town of Mallaig, passing the Glenfinnan viaduct (seen in the Harry Potter films). A one way ticket for the Jacobite train is included so that, on the return journey in the coach, the group can stop at the Glenfinnan Monument and Loch Nam Uamh, where Bonnie Prince Charlie landed in 1945. There is a visitor centre at the monument and a tour is included.

Overview: In the morning a tour within the spectacular landscape of Glencoe is included. This is the site of the 1692 massacre of MacDonald Jacobite supporters were killed by government troops. If the group are unable to walk for the duration of the tour, led by Rangers from the park, it is possible to take the tour in a Land Rover but this will only be possible for smaller groups and requires a supplement. In the afternoon Dunstaffnage Castle is included. The castle is famous for having held Flora MacDonald captive after she helped Bonnie Prince Charlie escape after the battle of Culloden.

Overview: A day at Loch Lomond is included. The itinerary  includes a transfer from Oban to Port of Menteith for an excursion to the scenic Inchmahome Priory, a sanctuary visited by key figures in Scottish history and culture. From here the group will transfer to Glasgow where the afternoon is at leisure.

Overview: A half day guided tour of Glasgow is included in the morning with an entrance to the Museum of Piping where the group can learn more about Scottish culture. In the afternoon a visit to the Kelvingrove Art Gallery and Museum is now included.

Overview: Our tour will end today after breakfast. 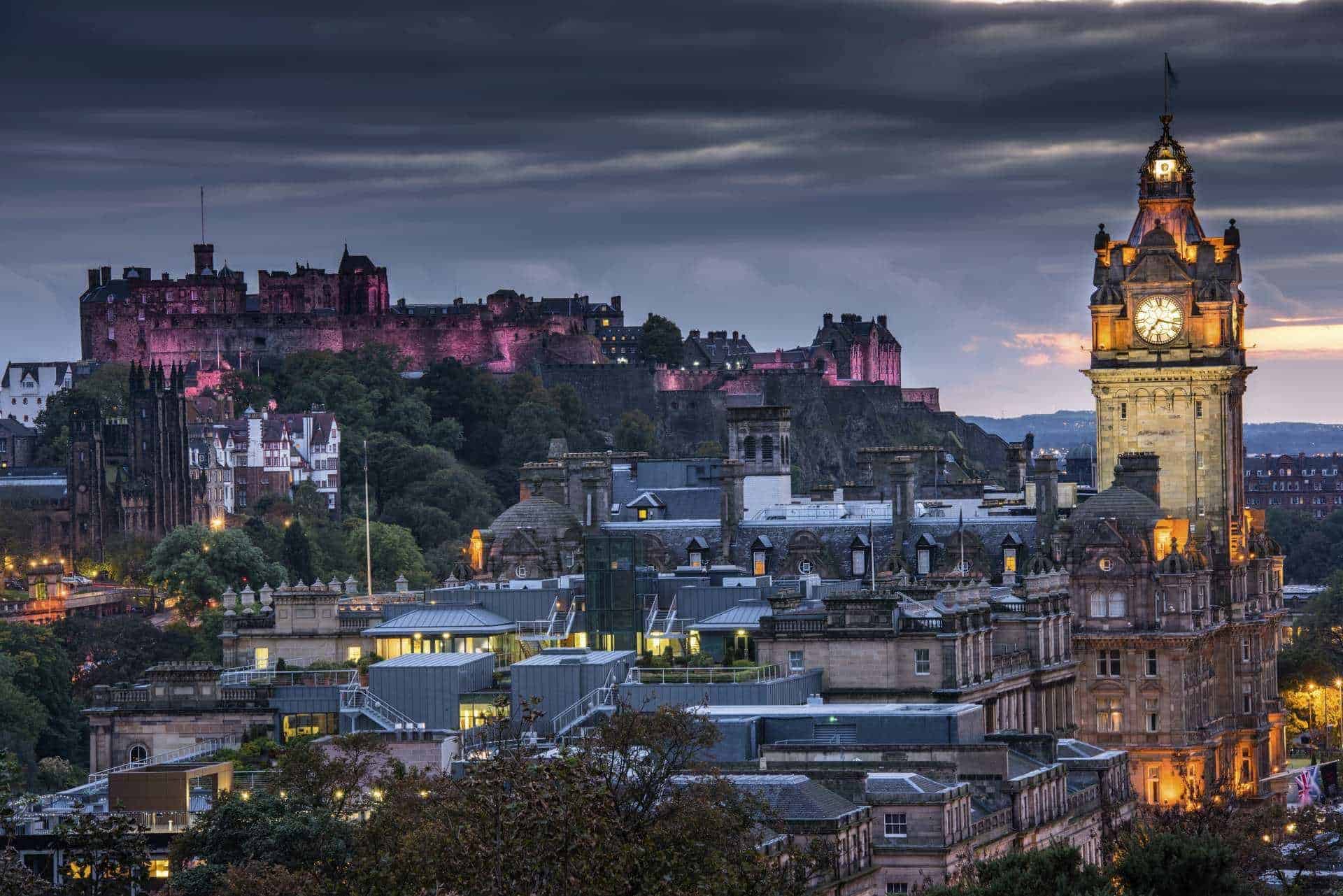 Kathryn Pitkin AM was a teacher in the NSW secondary system and then TAFE for over 30 years, retiring in 2004 as the Manager of Bathurst. She taught English, History and Communication.

From 2002-2010 she managed OzScot Australia, an Australia-wide company of Highland Dancers, who performed at military tattoos in Edinburgh (6), Switzerland, Canada, Korea, Oman and the USA.

From 2002-2014, Kathryn was on the Council of Charles Sturt University and served as Deputy Chancellor from 2007-2014. In 2014 she was awarded Doctor (honoris causa) of the University.

Kathryn was appointed a Member of the Order of Australia (AM) in June 2016 for her contribution to tertiary education and training, and the community.

Her love of Celtic music and stories, Irish literature, years of teaching History and Literature, and many travels has led to a long fascination with Celtic pre-history and history. She plays a Celtic Harp and performs in a harp trio.