History of France by Rail

History of France by Rail  offers participants an unforgettable journey through French history based in Paris. On this educational tour, based on Ina Caro's famous book of the same title, we live for almost three weeks in one of the central arrondissements of Paris. Using charming Paris apartments as a base, we live as the locals do, enjoying the charms of Parisian life. We have time to enjoy the bustle of daily Parisian life, with morning coffee at the local boulangerie and visits to the local markets. In the evening there is, of course, time to explore while visiting local cafes and charming restaurants.

From this base, we come together each day as a small group to journey by rail to the beautiful medieval city centres of France. While here, we experience short tours in such historic and scenic cities as Caen, Chartres, Rouen, Tours, and Avignon. Riding the train is a great way to reach out into the history of this fascinating country.

Exploring the History of France enables both couples and single travellers to journey with like-minded individuals. A couple of hours is all it takes to arrive in the heart of some of these magnificent cities. Consequently, we have many hours to join a local guide for a walking tour of the city. We return towards the end of each day on a fast train back into Paris ready for another adventure the following day. On most days, the program provides us with the evening free to explore Paris.

Our start time each day is usually after the morning rush when we meet up with the program leader. This escorted European small group tour for seniors includes just two overnight stays outside of Paris, in Tours and Avignon. This program is limited to a maximum of fifteen people. Let the history of France come alive on this extraordinary cultural tour!

The following list of articles, represents some of the articles  published by Odyssey Traveller for mature aged and senior travellers to maximise their knowledge and enjoyment of France when visiting;

For all the articles published by Odyssey Traveller, please click through to this link

To view the entire collection of tours to Europe click here offered to mature aged and Senior travellers each year.

Odyssey Traveller regularly offers tours designed for the active senior or mature traveller to enjoy in a small group holiday and learning environment. We also publish articles to provide more information to our loyal and prospective participants.

Overview: Upon arrival in Paris we will come to the accommodation individually. We will settle in to our apartments and meet in the early evening for a briefing followed by our welcome dinner at a local restaurant.

Accommodation: 7 nights at a Paris apartment located in a central arrondissement.

Overview: Today we begin our tour with a guided walking tour of the Île de la Cité, including a visit to the Archaeological Crypt and a visit to the nearby Notre Dame Cathedral. Here we discover remnants of buildings and monuments from the 3rd century including two Gallo-Roman rooms heated by hypocaust. After free time for lunch we travel by Metro to the great Cathedral of St. Denis to learn about its place in the history of French architecture and to see the magnificent Royal Tombs.

Overview: The market in the Marais area is our morning activity. Here we can stock up for our apartment needs with vegetables, fruit, cheeses, wines, and anything necessary or unnecessary-but-desired! In the afternoon we will enjoy a guided walk of the area including the beautiful Place des Vosges with its connections with the great King Henri IV and famous characters such as Mme de Sévigné and Victor Hugo.

Overview: We will have an early start as we meet for our journey to the city of Caen in Normandy by rail. Here we discover the 11th century with a visit to the Abbey of William the Conqueror and see his simple, black marble tomb. A leap to the 20th century takes us to the thought-provoking Memorial Museum with its dedication to the events of WWII.

Overview: Today we meet at Montparnasse Station for a full-day visit to Chartres where we will have a guided tour of France’s first High Gothic Cathedral with its magnificent stained glass windows. Back in Paris, in the evening, we hope to complete this era of history at a concert in the Ste Chapelle of Louis IX. (If we are lucky, the sun will light up the glorious stained glass windows of this exquisite chapel.)

Overview: Our full-day tour today takes us by TGV (fast train) to the city of Reims, site of the coronation of most of the French Kings. It was here that Joan of Arc brought Louis VII to be crowned after the tide of the 100 Years War was turned. During our guided walking tour of the city, we will visit the Cathedral, learn of its history and admire its stained glass including a modern series of windows by Marc Chagall. We will also learn about the city’s post WWI Art Deco redevelopment.

Overview: The TGV will take us south to Avignon for an overnight stay. On arrival we will have a guided tour of the city including a visit to the Popes’ Palace.

Accommodation: 1 night at the Cloitre St Louis hotel or similar.

Accommodation: 2 nights at a Paris apartment located in a central arrondissement.

Overview: We will have time to catch our breath with a free day in Paris to explore on our own. Our Tour Leader will have some suggestions to assist those who want a “planned day.”

Overview: We travel on the TGV through the French countryside to the city of Tours in the Loire Valley. On arrival our guide will take us on a walking tour of the city including the delightful Place Plumereau with its half-timbered houses and a visit to the Musée du Compagnonnage (Museum of the Guilds). We spend the night in the city and enjoy dinner in our hotel.

Accommodation: 2 nights at the Hotel Grand or similar.

Overview: Where better to explore the development of castle architecture than the Valley of the Kings! Our guided tour will take us to the 3 glorious (and very different châteaux) of Chinon (Joan of Arc connection), Villandry (with its glorious gardens), and the delightful island château of Aizay le Rideau (one of the earliest French châteaux which seems to rise directly out of the water).

Overview: We will have a free morning in Tours to explore before we return to Paris on the TGV.

Accommodation: 8 nights at a Paris apartment located in a central arrondissement.

Overview: Today we meet at the Gare De Lyon to travel by rail to Fontainebleau Château, built by François I but with connections to Napoleon. We can explore the château and gardens in our own time with an audio guide.

Overview: Today gives us an intriguing juxtaposition of historical periods. We travel to the Norman capital of Rouen to visit the Cathedral much painted by Monet and to see the contrasting modern Joan of Arc memorial church, marking the place where this French heroine was burnt at the stake by the English. There will be time to explore the delightful streets and squares with their half-timbered houses.

Day 16: Paris to Château of Vaux-le-Vicomte

Overview: A bus will take us to the Château of Vaux-le-Vicomte, regarded as the inspiration for the great Versailles of Louis XIV. Built by his minister, Fouquet, (and the cause of Fouquet’s downfall!), designed by the great architect Le Brun and with magnificent gardens (regarded as the very first “French Garden”) created by Le Nôtre, this château is a gem to visit. The fountains usually play on Saturdays.

Overview: We begin the day with a guided Revolutionary Walk to discover the sites and haunts of the plotting and scheming which led up to that event in 1789. The afternoon is free for continued personal exploration on the Left bank (Panthéon, St Étienne etc).

Overview: In December 2012, the industrial city of Lens became home to an innovative renovation of one of its old coal mining sites – a satellite of the Paris Louvre. This ultra modern glass and steel complex houses a wealth of exhibits from the core displays of the Louvre – on medium or long-term basis. We will take the TGV for the day to be among the first visitors to enjoy this experience.

Overview: We continue our artistic theme, but this time in the outdoors as we travel to Giverny to visit the delightful house and garden of the great Impressionist painter, Claude Monet.

Overview: Our morning visit is to the Musée Jaquemart André – an elegant late 19th century house with outstanding 16th – 18th century European and Italian Renaissance art, sculpture, and furniture. In the afternoon we visit the magnificent Palais Garnier, home of Paris Ballet and Opera, for a guided tour and the chance to enjoy the work of Marc Chagall once more with the painted ceiling of the auditorium. We enjoy a farewell dinner at a local restaurant.

1
Enjoy overnight stays in the historic cities of Avignon in Provence and Tours in the Loire Valley.
2
Experience everyday life as the Parisians do, from our apartment.
3
Explore the newly opened Louvre Museum Extension in the city of Lens.
4
Explore Paris and journey by rail to regions and great cities to learn about their historical significance and influence on France.
5
Shop for fresh food at open-air markets and savour the local cuisine and culture. 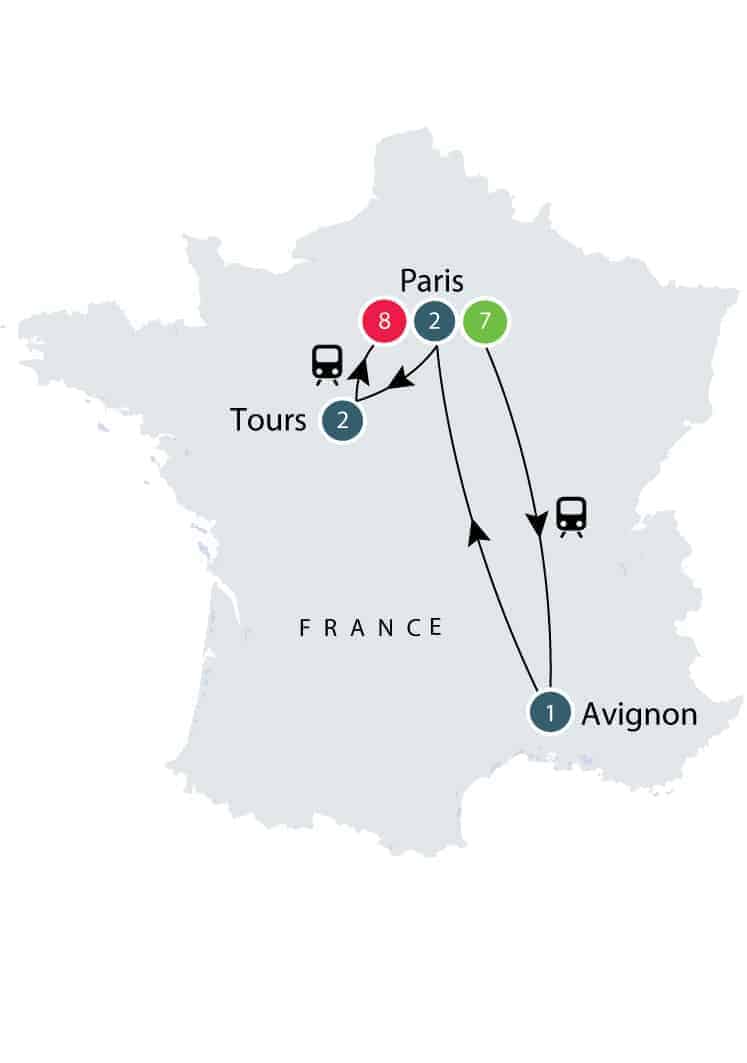 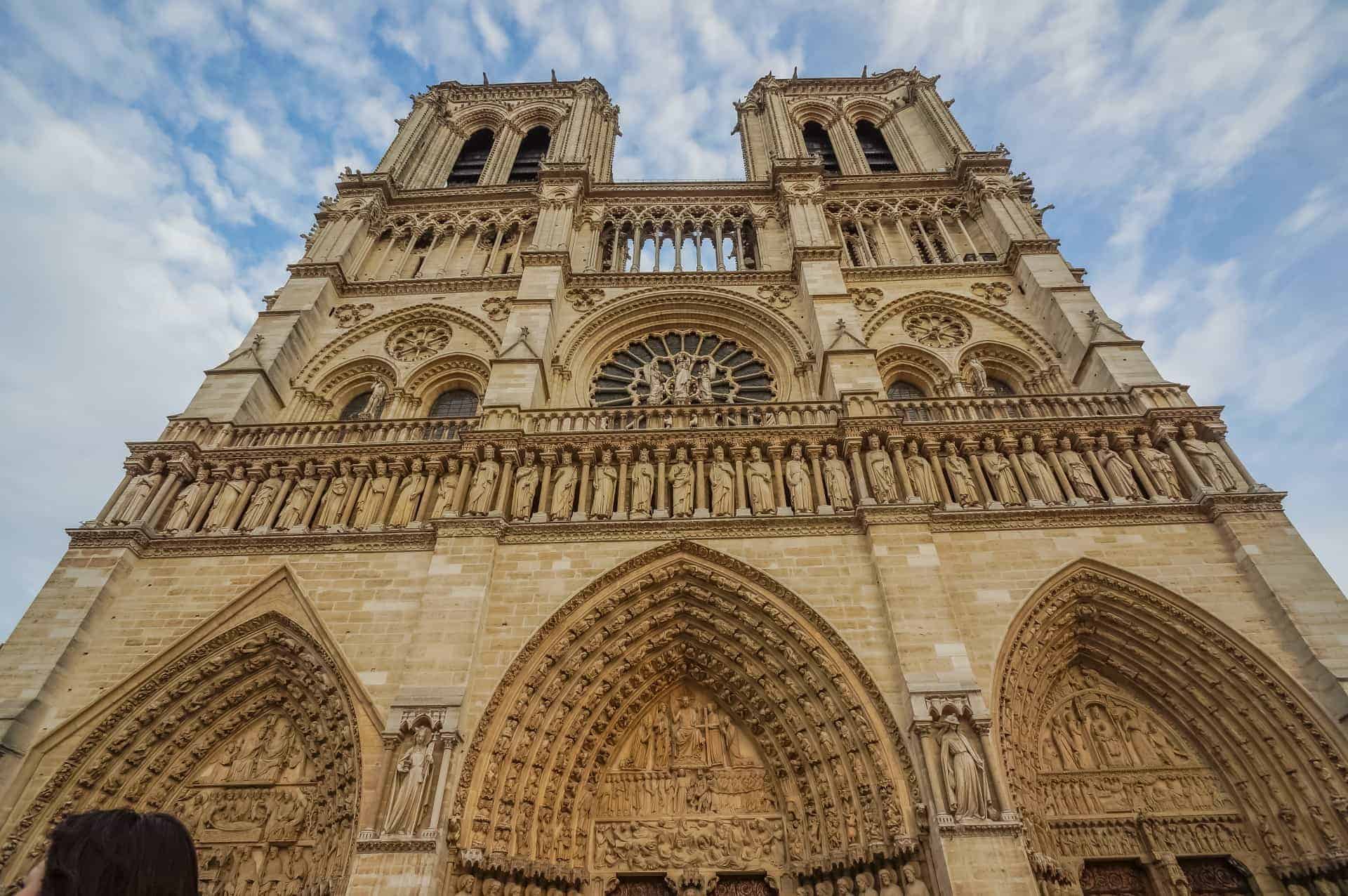